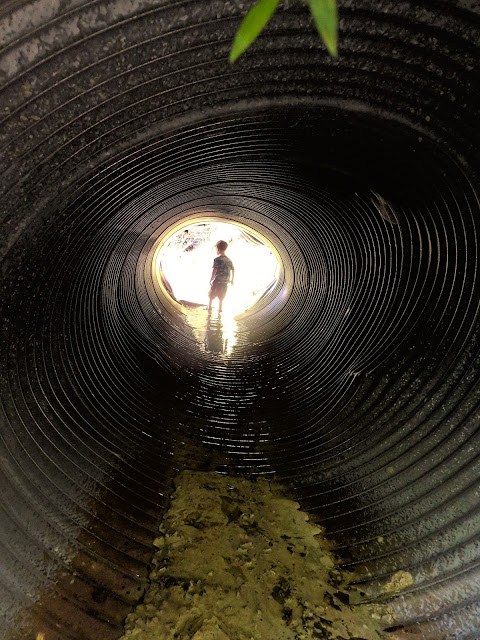 As we steadily creep closer and closer to living on our new homestead, my mind turns towards next year's breeding season.

I'll likely stick to poultry and rabbits for next year, but we may add some other species, as our space and budget allow. I've been commissioned to raise a pig to roast at my sister's wedding reception, so I guess I'll have that to figure out.

It would be nice to get some sheep and/or beeves to eat our grass and have something for the freezer next fall, but I don't want to get too overwhelmed. There will still be many more improvements on the house and property that will be ongoing for sometime (actually, I don't expect that to ever end - home ownership. YAY!).

I've spent a lot of time in the backyard observing my juvenile Appleyards from this season's hatch, deciding who I'm going to keep in the gene pool.

My best 3, a drake and two hens, have the most correct color and plumage of the bunch. 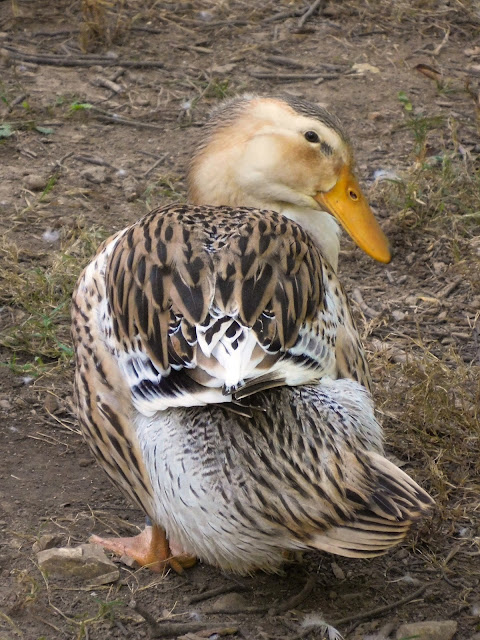 I'll be keeping several of the blue hens as well.

And it looks like I'll be breeding Muscovies as well!

I think I have 2 drakes and 1 hen in my trio, but I'm not entirely sure.

I especially like the markings on this little male. He appears to be a pied black ripple, if I'm not mistaken. (*UPDATE: I looked it up and he's actually barred, and most of the barring disappears as they age. Bummer.*) 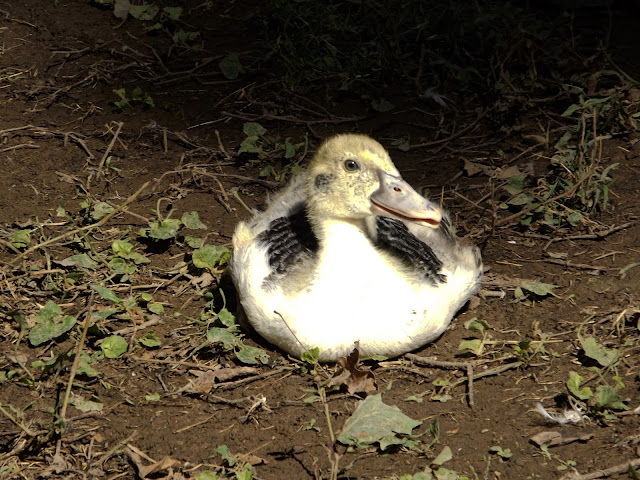 They were obviously being naturally brooded on range, because they initially wanted nothing to do with me, and were desperate to join the flock.

Even though they get the occasional peck, the older ducks are very tolerant of these trilling, bobbing little aliens tagging along with them. 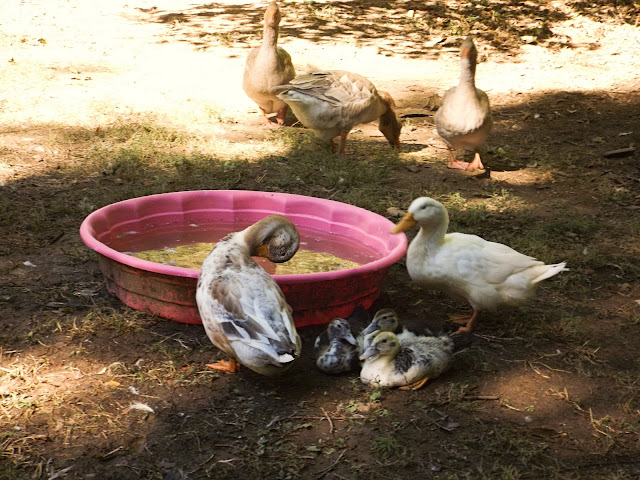 They've also calmed down a lot since they joined us.


It really wouldn't be a huge deal if I had 2 males and one female, because it isn't like there's a shortage of pied muscovies or anything.

I have 5 to choose from at my parents' farm next door. The only thing that's got me wondering is whether or not all of the strays we picked up at the park are pure muscovies or hybirds. 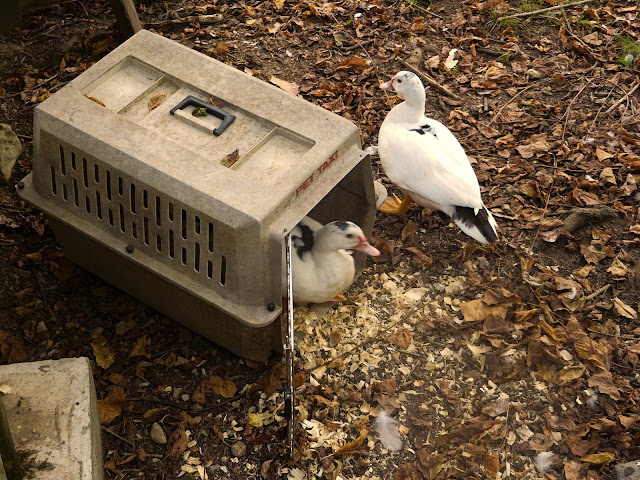 I know I've heard one of them quack once or twice. Hybrids with mallard-derived ducks result in an infertile mule, so only time will tell. 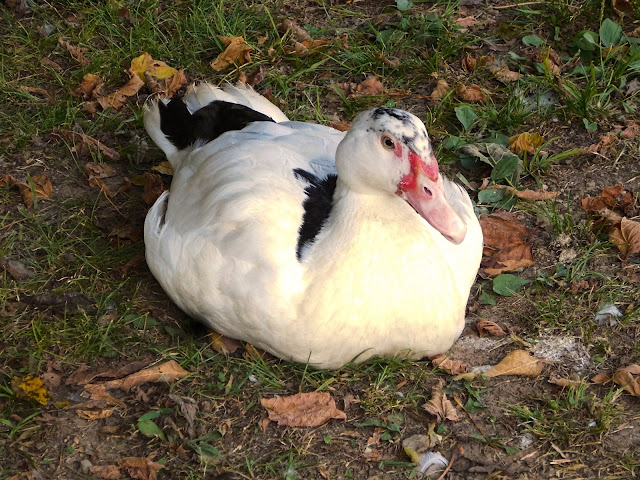 Either way, more muscovies are in our future.

I will definitely work on building my Tufted Buff flock next spring!

If so, I'll have to decide whether I want to select the nicest of the two for breeding, or just run them together and hatch eggs from both ganders.


I am planning on ordering some goslings from Metzer Farms as soon as the weather permits.

Even though my 3 are nice birds, I have no idea where they originated from or how many generations they have been inbred. Metzer acquired their stock directly from the woman who created the breed, so it will be nice to incorporate their genetics. I'd really like to develop two separate lines. I could easily run two separate flocks during the breeding season, with mom and dad's farm next door.

Although I'm probably going to have to give them ID bands to help keep everybody sorted out.


I'll be hatching eggs from these guys as early as possible, and then crossing those offspring with Metzer stock.

There are a handful of other breeders in the country I might can purchase hatching eggs from for future breeding seasons.

Another option is the re-home one of the ganders or see if I can swap him out for an unrelated goose, but to be quite honest, I have gotten terribly attached to them all - I'm not sure I could do it!

Needless to say, eating him is also out of the question.

Since they're such a rare breed, they are currently more valuable as breeding stock than table fare, anyhow.

There may come a time when we are overrun enough with ganders we can justify putting some in the freezer. But that begs the question: could I do it? That is the only foreseeable problem with this breed - they are too sweet and friendly! 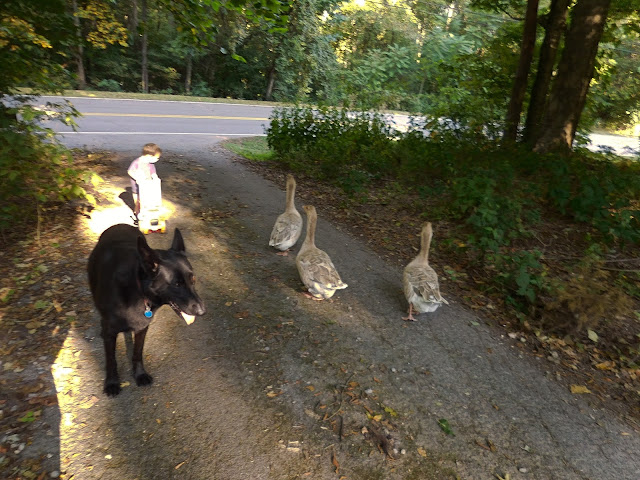 Once we get moved and the weather cools, I can turn my attention to breeding rabbits.

I'd love to get back on track with my Creme breeding project, but we'll see how feasible that is. I'll keep an eye out for breeding stock.

Meanwhile, I can focus on my New Zealands and getting my Creme crosses bred before they get too fat.

It will be my first time breeding 5 does, so we had better get some space ready (both cages and the freezer)!

I'd like to select a heritage chicken breed to raise, but that will mean building some more coop/run space. We may still be able to utilize the existing chicken houses, as both duck and chicken space.

I'll still be giving everybody covered runs, but I'm hoping the dogs will do a good job of fending off predators, which are more of a problem in that valley than they are at our park home.

I know Tala (our big German Shepherd) and Mika (our Cur/hound mix) will be pretty dependable, but our other two are really aging. To be honest I'm not sure they have much longer than another year or so.

So we will also be on the lookout for an LGD pup, preferably an Anatolian or Anatolian cross from working lines. Pyrs can be good at what they do, I just don't like dealing with all of that hair.

Hair sheep and additional poultry breeds are also on our bucket list. And a pig, apparently.

As far as gardens go, my parents plant a large vegetable garden every year, so there's no need for us to do the same.

I do want to plant a kitchen/herb garden at our back stoop, however.

All in due time, however.

I'm excited to finally be expanding our little farm!

Meanwhile, our floors are almost done.

He should be finishing them this week, and then it will be a flurry of activity putting up trim and baseboard, hanging doors, hooking up water and putting in the bathrooms! 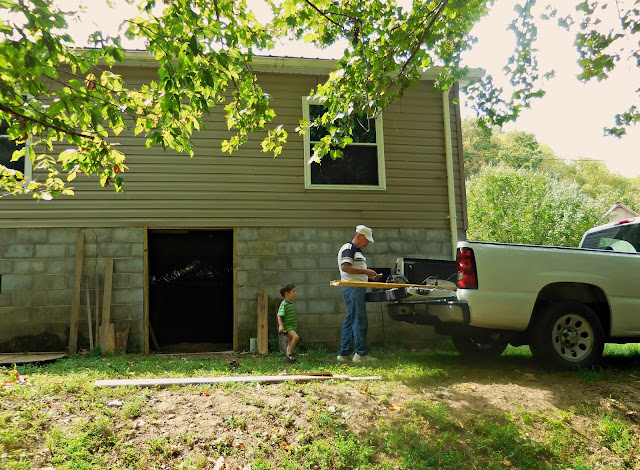 Mark's dad has also been working on re-building our crawl space door. 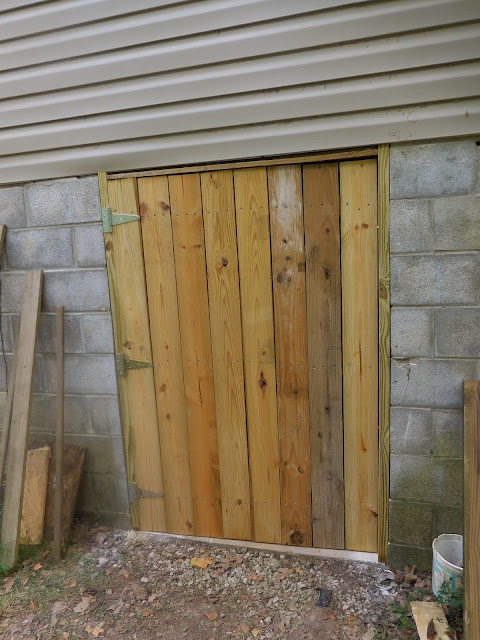 Fencing will be last, but if we don't finish it before we need to move in, we can get the animals set up next door at my parent's farm.

Things are looking up! 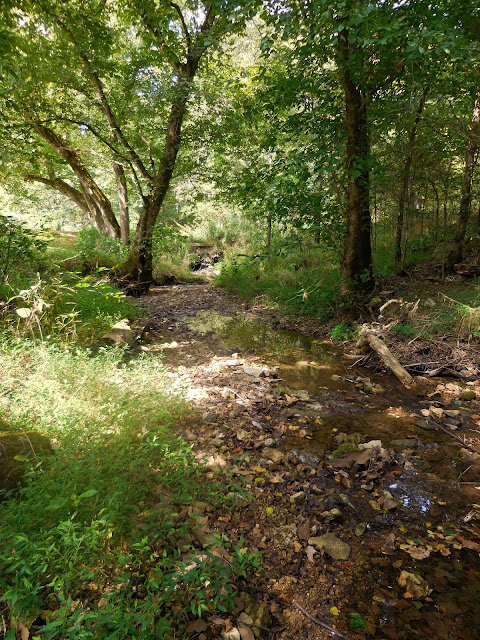 And with these hot, dry days, that creek is looking better than ever!