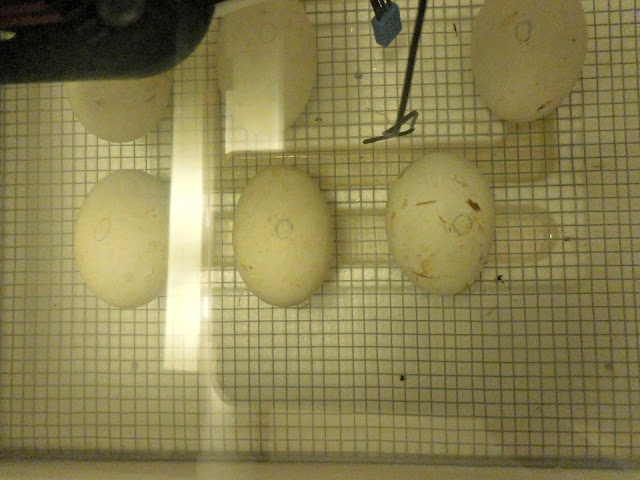 The duck eggs are due to hatch out in two days, and I'm really hoping everything goes well.

We had a power outage the day before yesterday when a storm ripped through the area. Normally the power company responds within the hour, but there was widespread damage so it ended up being 5 hours before they were able to restore the power.

I covered the incubator with a fleece blanket and closed off the room. I later lit an oil lamp in there to help boost the temperature even more. I was a nervous wreck!

The last 5 days are especially important when it comes to stable temperatures, and getting too cold can influence their ability to hatch.

When we finally got our power back I immediately checked the thermostat and it was at 82 F.

That isn't too bad considering the amount of time that lapsed, so hopefully they will be alright.

The eggs still have good movement, and it was especially encouraging to hear a little "peep, peep" resounding from the incubator this morning. They are due to hatch on Sunday, so we shall see!

Around the same time I set the eggs, one of the remaining Silver Appleyard hens at the farm decided she would show me up. 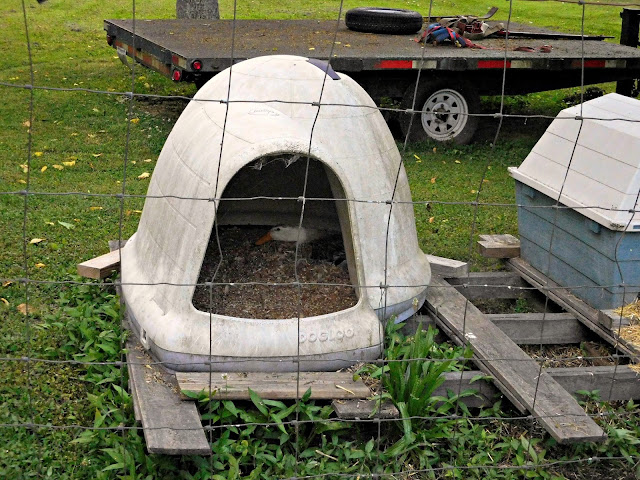 In the past, they have gone broody for a week or so and then snapped out of it, so I really wasn't expecting much.

This time she seems to be in it for the long haul. Maybe she sensed their dwindling numbers? 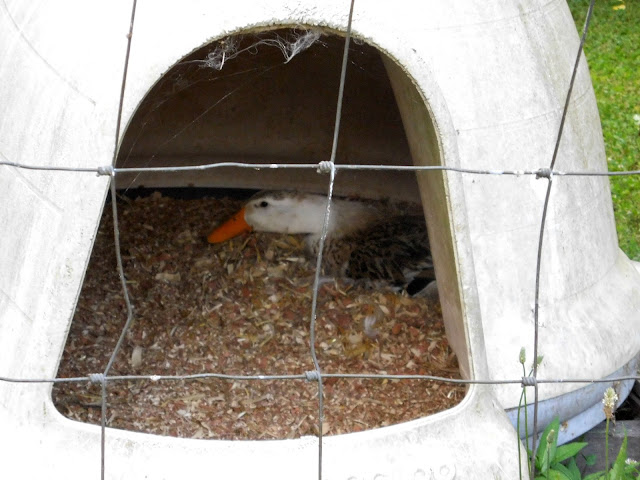 I haven't been keeping track of time, but those eggs should be hatching sometime next week.

The jury is still out on the two ducklings I brought home from the farm a few weeks ago.

I'm still holding out hope that the larger one is a hen, but I have that sinking feeling that they are both drakes. Their voices are just starting to crack, so only time will tell. 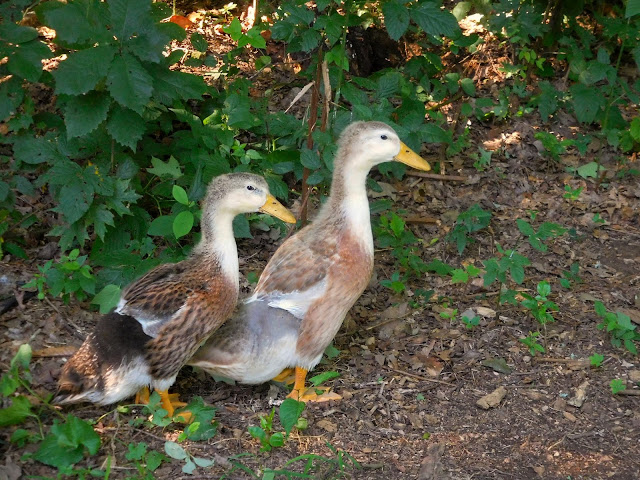 The runty one on the left won't be useful for breeding either way. It's pretty weak on its legs. Not a good trait to pass on.

They are enjoying living outdoors, now that the weather has warmed considerably. They are now residing in the ill-fated rabbit grow-out pen. 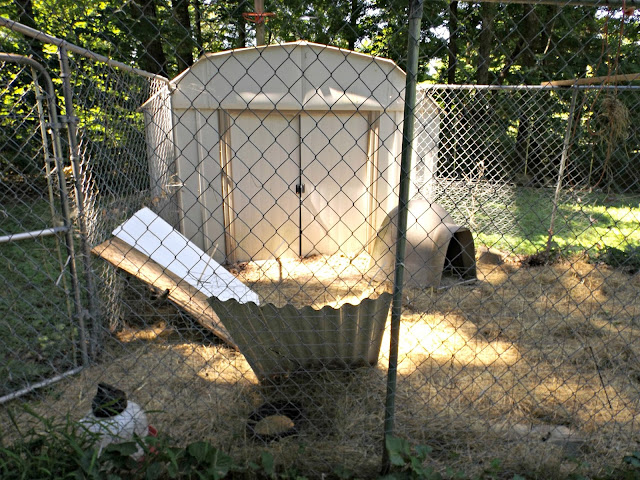 It still needs to be covered, but every time we go into town, the store is out of deer netting. At night I close them up in the metal shed.

Even though it was a bit of a failure for rabbits, it is working out great for the ducklings. And I am very pleased to vacate them from my house. 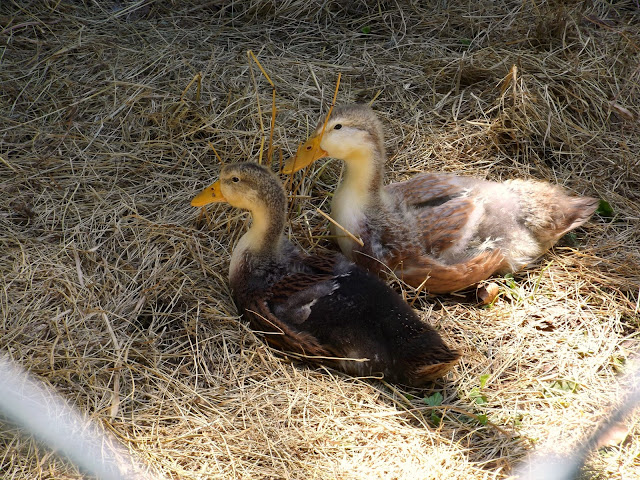 In other news, I have been collecting feathers shed by the adult ducks over at the farm to sell in my Etsy shop. 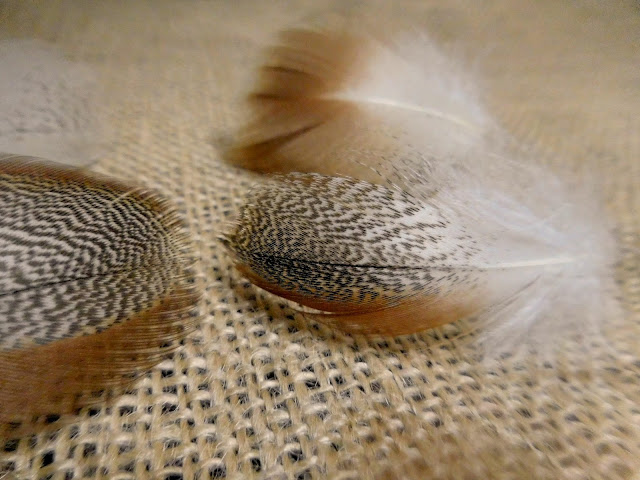 The feathers are so gorgeous, I know there are creative people who can turn them into crafty awesomeness. 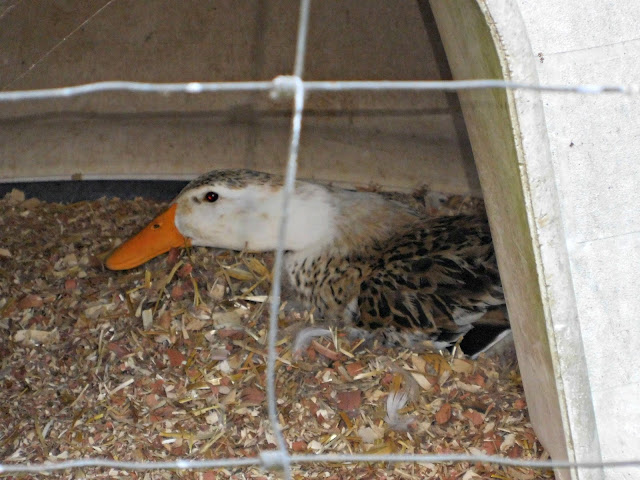 Shortly after publishing this post, I happened to be in the incubator room and hear a very faint crack. Somebody just pipped! 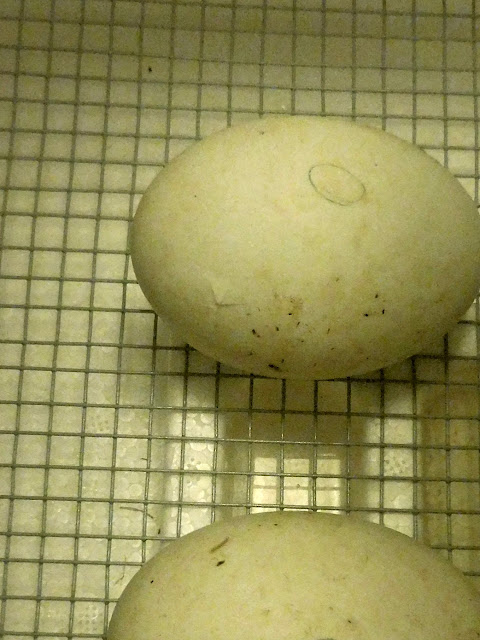