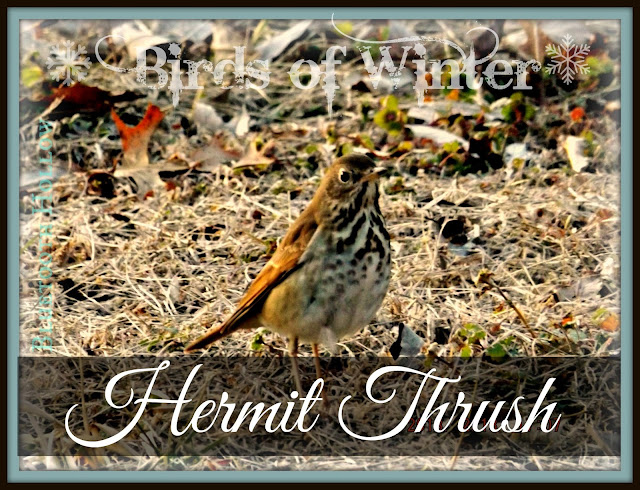 During the warmer months, the sound of a Wood Thrush calling at dusk encompasses the nostalgia of Summer.

When the Wood Thrushes leave in Autumn, the void they leave behind is filled by its close cousin, the Hermit Thrush.

In the western US, folks living at higher elevations also get to enjoy their presence in summer, and they are year-round residents in southern AZ and NM.

Unlike the Wood Thrushes, Hermits are here only for the winter, spending their days quietly foraging in the understory. 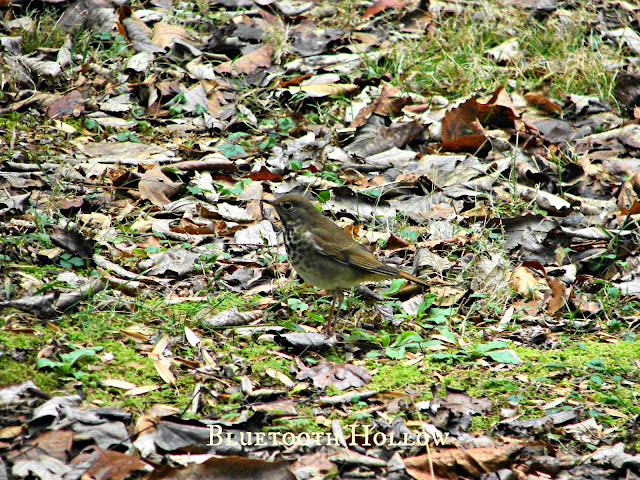 Robins and Bluebirds are also classified as thrushes, and they are all set apart by their accomplished singing abilities.

It's hard to beat the spotted thrushes, however, when it comes to bird songs.

They have such a haunting, ethereal quality that makes you stop in your tracks and listen every time.

The thrushes have a unique ability among birds which helps account for this signature sound.

Some songbird species (thrushes, warblers and sparrows, for instance) have a complex, forked voice box.

This gives them are wider range of singing abilities, and makes for more interesting and complex songs.

Most birds use only one side of their voice box at a time, or alternate between both sides.

The spotted thrushes take this a step further, and have the ability to use both sides simultaneously.

This means that they can actually harmonize with themselves!

We don't get to hear Hermit Thrushes sing too often in our neck of the woods, but usually, once spring rolls around, they get the urge and we have the privilege of listening to their haunting, melancholy song.
Hermit Thrush Song

Their song is lovely enough as it is, but what is truly amazing is listening to their call slowed down, so you can hear all of the notes, and appreciate just how complex their song is.....

The thrushes (family Turdidae) can be a somewhat confusing group to identify.

Hermit Thrushes are very similar in appearance to the other members of their group, so lets spend some time learning to tell them apart.

Luckily, the rusty tail and their habit of bobbing it up and down are good identifiers for the Hermit Thrush. 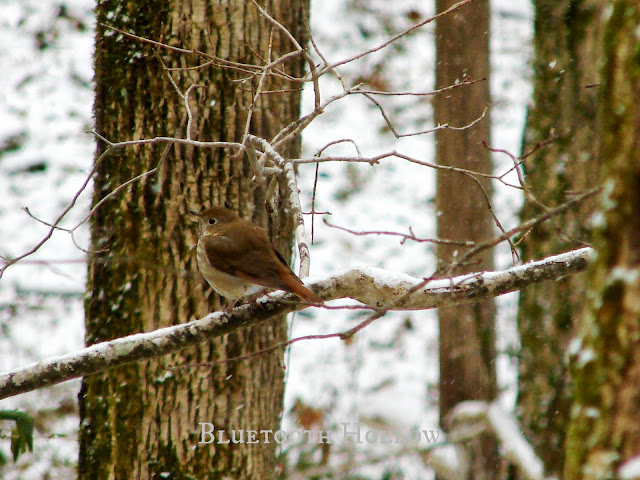 In the winter months, they are the only spotted thrush inhabiting our woods, but during migration, there are several other species that can make it confusing.

The Wood Thrush (the only member of the group that breeds in the middle TN area) is set apart by its rich chestnut color and large black chest spots that are very well defined.

The Hermit's spots are redder and more smudged in appearance.

Their rich, fluting song is very familiar to anyone living within their summer breeding range.

The Swainson's Thrush has a more slender body with longer wings than the other thrushes, and a duller olive gray coloration. 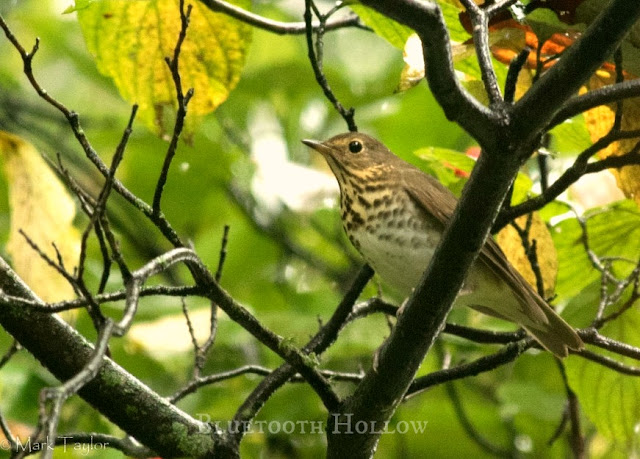 They also have a buffy wash over their cheek and upper breast, paler, less defined spots and a light "spectacle."

Their song is very similar to the Hermit Thrush, only each phrase spirals upwards without any down-swinging notes.

The Veery has a uniform, warm coloration, a mostly plain face, very pale spots and little to no eyering.

It has a rolling song that spirals downwards in two phrases.

The Gray-Cheeked Thrush is dull gray, but still rather difficult to distinguish from the Swainson's at a distance (both species are shy skulkers of the understory).

It is set apart by its overall color and its lack of buffy coloration on its face.

Its call is similar to the Veery's, but jumps around a lot  more.

All of these species will intermingle in the fall when Nyssa sylvatica and other tree species are in fruit, and sometimes you can hear all of them singing at once! It's quite bewildering.


After the flurry of migration activity in the fall and the stillness of winter has set in, Hermit Thrushes can be seen skulking about in the understory, bobbing their rufus tails up and down as they go. 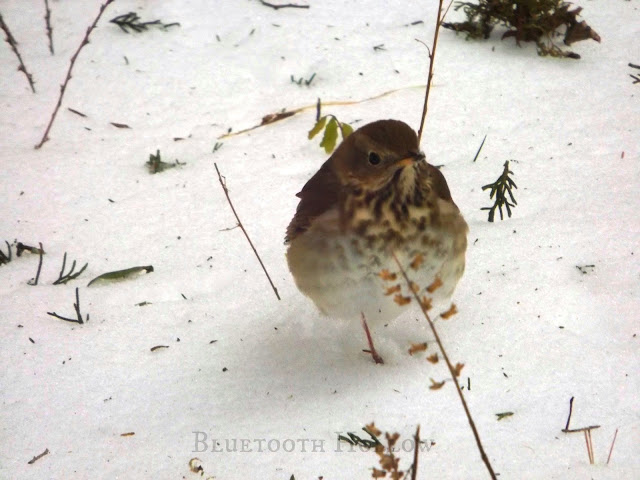 While their breeding diet is composed of insects, during winter they eat mostly fruit.

We don't tend to think of fruit as food that is readily available during the cold months, but there are many plant species (shrubs and vines) that keep their fruit through the winter.

Sumac, poison ivy, Virginia creeper, rose hips, mistletoe, viburnum, pokeberry, elderberry and smilax include just a few of the fruits that make up their winter diet. (You can learn more about birds' winter foraging habits in my blog post here.)

During the breeding season, Hermit Thrushes inhabit a wide variety of forest types, everything from boreal to deciduous. Their breeding range extends as far north as Alaska.

They build their nests on or near the ground, usually in low branches or shrubs, but they have been known to nest in cemetery graves, golf courses and mine shafts.

Interestingly, Hermit Thrushes breeding east of the Rockies tend to nest on the ground, while those in Western America normally nest in trees.

The female lays 3-5 pale greenish or bluish eggs that hatch in 12 days. and both parents work hard to feed the fast growing nestlings protein-rich insects.

The nestlings fledge within 12 days, and the parents often raise a second or even a third brood, depending on how far south they are in their breeding range.

They tend to linger longer in fall than other breeding birds, so are one of the last winter arrivals in our neck of the woods.

Their preference for low places carries over into their habitat niches as well.

In the Appalachian mountains, for instance, they can be found in lower elevations than Veery and Swainson's thrushes, with the Swainson's occupying the highest elevations. (This can be helpful at times when trying to identify spotted thrushes.)

A group of thrushes is collectively known as a "hermitage" or a "mutation." 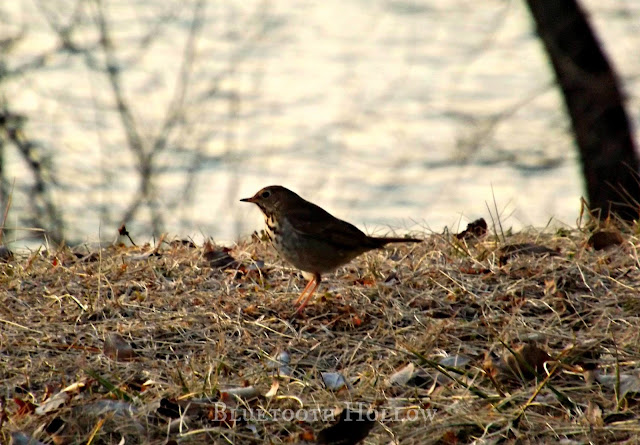 To find Hermit Thrushes, keep an eye out at ground level along forest edges and clearings. Although they may be similar at first glance to a wren or a brown thrasher, their reddish bobbing tail should tip you off.

They also have a skittering, start and stop motion that is similar to the way an American Robin runs across your lawn (they are related, after all). 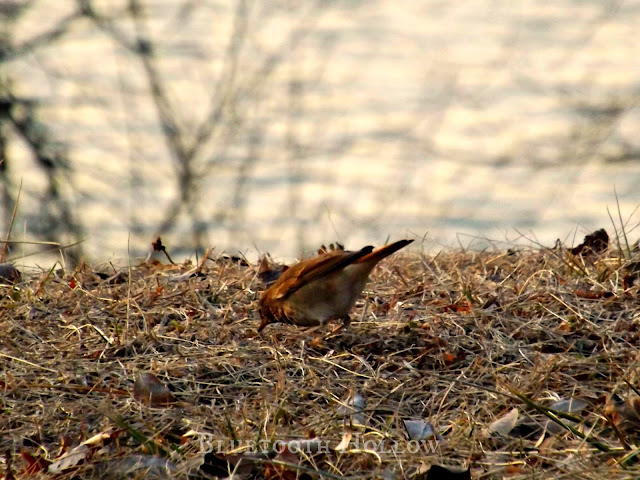 They have another unique behavior known as "foot quivering." They use it when they are foraging sometimes to help scare up insects. It has also been observed in birds that are about to resume foraging after being startled.

Mark filmed the following bird last winter. It's a bit shaky, but you can still notice the Hermit Thrush demonstrating this behavior (as well as his start and stop motion).


Scientists think this results from conflicting impulses telling the bird to take cover or continue foraging.


Another tip for finding them (or any bird) during winter is to simply, follow the birds.

Although that seems rather obvious, many birds flock together during winter, and if you see and hear a lot of bird activity in the woods, scan the group with your binoculars and you are likely to run across a Hermit Thrush foraging on the ground not too far away. 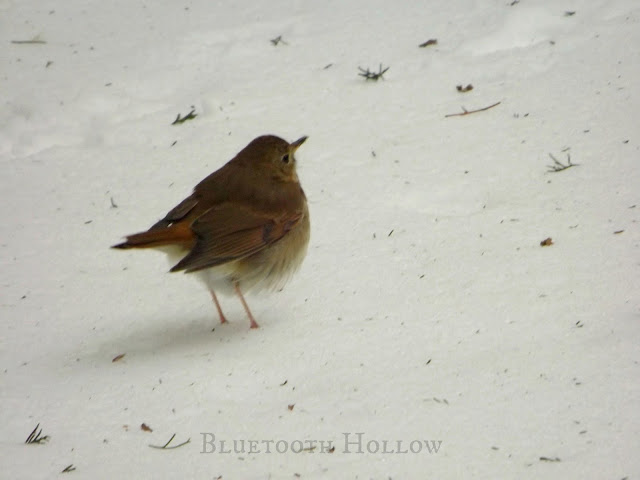 You can help attract them to your yard by allowing the understory to grow, and planting native fruiting trees and shrubs.

Early this coming spring, when the first wildflowers are just beginning to emerge, we may get to hear them sing for a few warm, sunny days before they make the return flight North.

For now, it's nice to share our cozy woodland space with them. 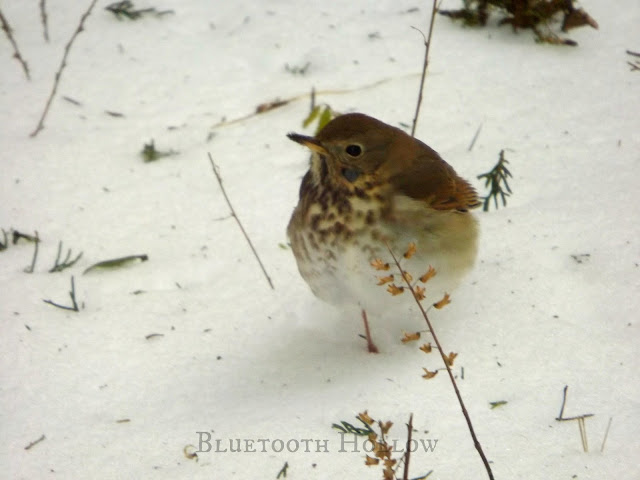 Cornell Lab of Ornithology: All About Birds