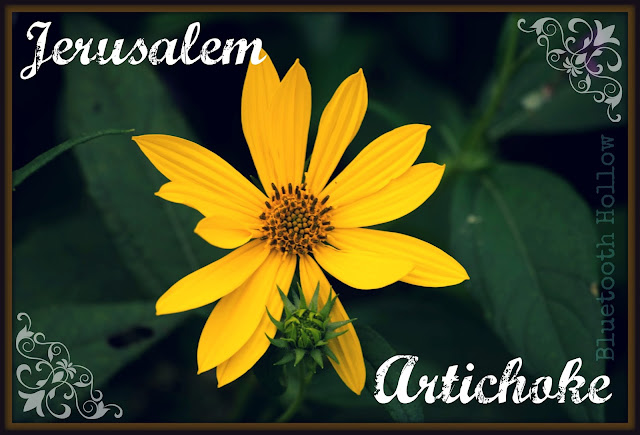 Native Sunflowers come in such a dazzling array of shapes and sizes, it's a wonder we ever buy non-native seeds in a packet.

I've known I wanted to cover one of these species all summer, but have had a difficult time selecting one.

Jerusalem Artichoke is probably one of our better known wild sunflowers, as well as one of the most common and widespread.

Their range covers most of the United States, absent only in the driest deserts. 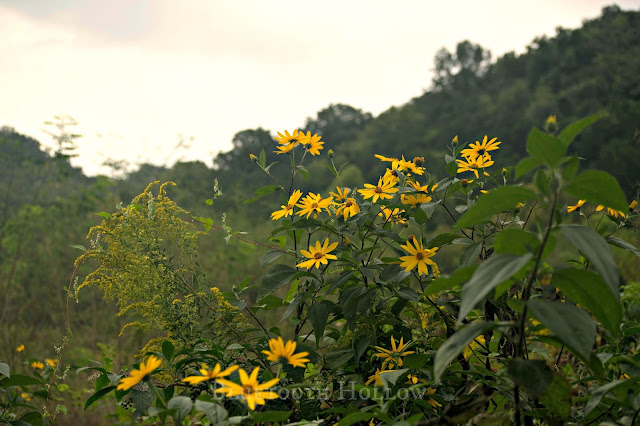 It averages 2 - 10 feet tall, sometimes branching in the upper half of the plant.

Its stems range from green to reddish, and are covered in short, stiff white hairs. 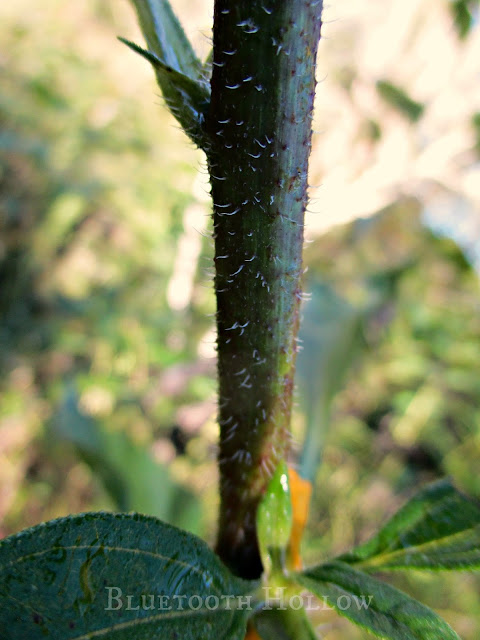 The rough leaves are lanceolate to ovate in shape, usually quite hairy, and have serrated edges. 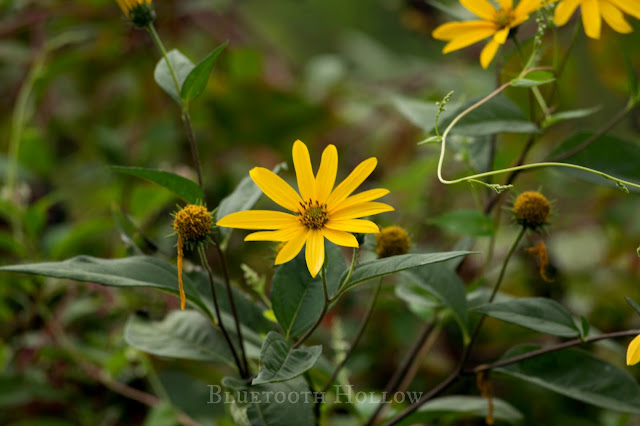 The bright yellow blooms measure 1 1/2 - 3 1/2 inches across, and are composed of densely packed disc flowers surrounded by up to 20 ray florets. 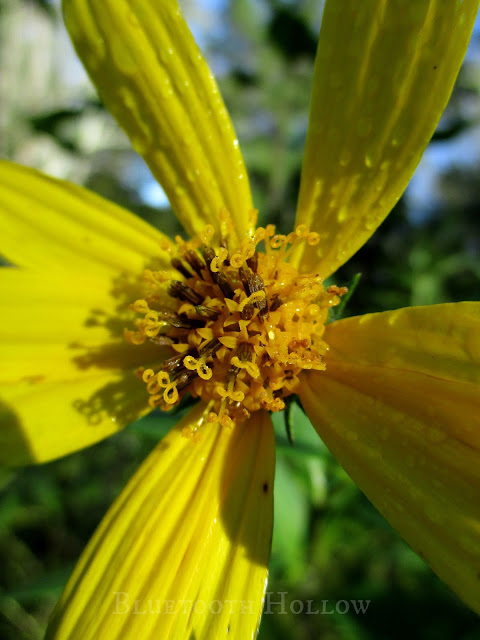 Its most distinctive feature is underground, but we'll get to that later.

Jerusalem Artichokes begin their bloom in late summer and continue into early Autumn.

Its name is memorable, but unfortunately, rather misleading.

It has nothing in common with the French artichoke (a thistle), nor does it have anything to do with the city of Jerusalem. It's not entirely clear where the artichoke reference came from, but early explorers to the New World were said to have likened the flavor to artichokes. The Jerusalem part of its name originated from the Italian word girasole, which means "turn to the sun." 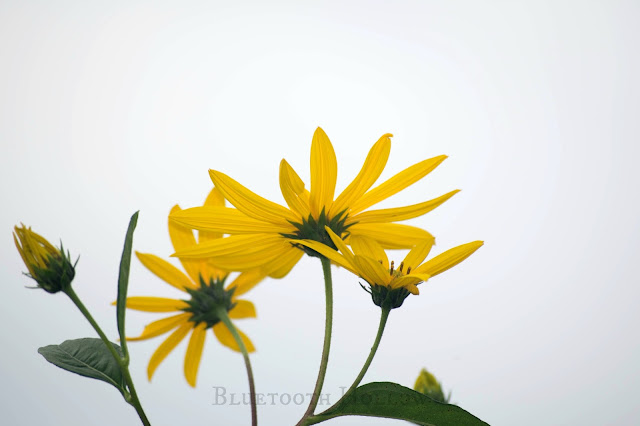 Like all sunflowers, the blossoms of Jerusalem Artichoke follow the sun like yellow satellite dishes - which of course, is the whole reason sunflowers got their name.

Tuberosus is Latin for "swollen" or "tuberous," in reference to its large, knobby rhizomes. 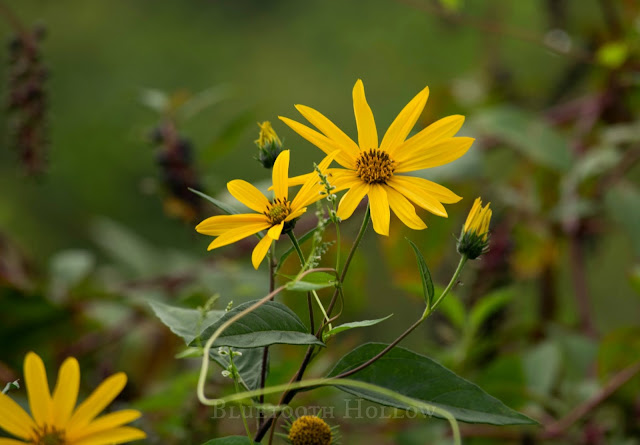 Unlike other Helianthus species, the Sun Choke doesn't put all of its energy and nutrition into its seeds, but its roots.

These rhizomes have given Jerusalem Artichoke its recognition throughout antiquity for their significant food value.

It was cultivated in large numbers by Native Americans, who traded with other tribes. This is how Jerusalem Artichoke wound up with such an expansive range, even though it is truly indigenous to the Great Plains.

In fact, it was the native tribes who introduced the Sun Choke to European settlers in the early 1600's, who then brought it back to the Old World. It later became popular for livestock fodder in France. It also happens to be the only significant vegetable introduced to Europe from North America. It has since naturalized and can be found growing throughout the European countryside. 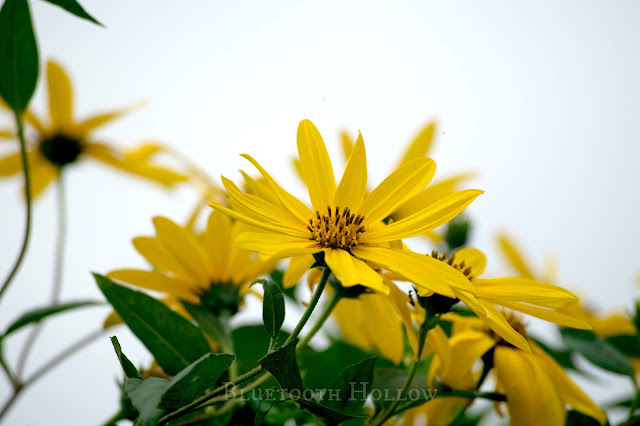 Jerusalem Artichoke could be one of our finest wild edibles.

The roots are best harvested during late fall or early winter when they are higher in sugars, but can be dug anytime beginning at least two weeks after the flowers have faded.

The clumped rhizomes resemble small potatoes or even ginger root, and can be scrubbed clean and eaten raw. There is no need peel them.

They make a crisp, refreshing addition to salads with a flavor akin to water chestnuts.

Otherwise, they can be prepared virtually any way you would cook potatoes: boiled, steamed, baked, mashed, roasted and fried (even though they don't really crisp up like potatoes).

The British turn them into a creamy soup and they are said to be delicious pickled.

You must watch them closely, however, because they will collapse and turn very mushy if they are overcooked. Some sources recommend nothing more than a light steaming to preserve their texture.

Sun Chokes are not only delicious, but nutritious. They contain fewer calories than potatoes, but are high in the starch inulin, which is a natural sugar that gives us that full, satisfying feeling after eating them. They are also very high in vitamin A and B-complex, potassium and phosphorus. 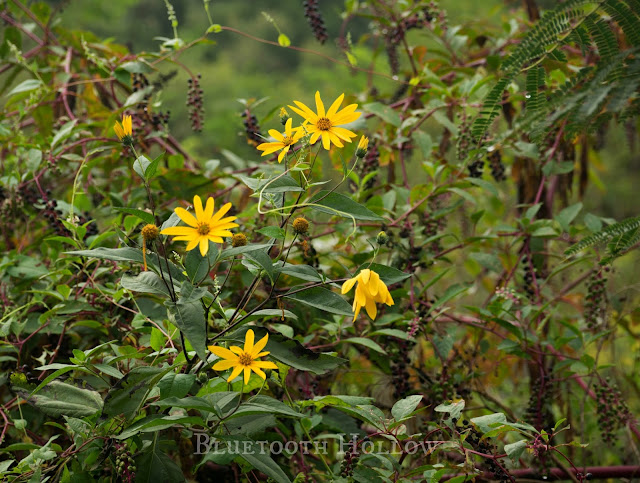 Inulin is a type of fructose, and makes Jerusalem Artichokes a good food choice for diabetics and hypoglycemics. Be warned, however, that it is indigestible, and can cause gastric bloating, pain and severe flatulence in some individuals.

This was obviously the case for the English planter John Goodyer, who wrote the following in Gerard's Herbal in 1621:


"which way soever they be dressed and eaten, they stir and cause a filthy, loathsome stinking wind within the body, thereby causing the belly to be pained and tormented, and are a meat more fit for swine than men." 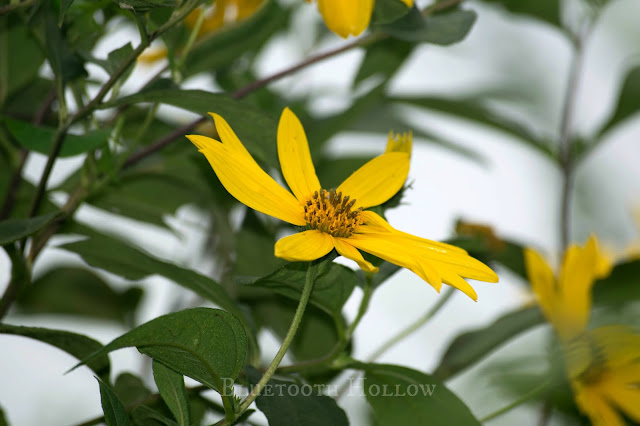 While food has been their primary purpose throughout the ages, the Sun Choke has had a handful of medicinal uses as well.

It was reported to be an aphrodisiac, diuretic and tonic, as well as a folk remedy for diabetes and rheumatism. 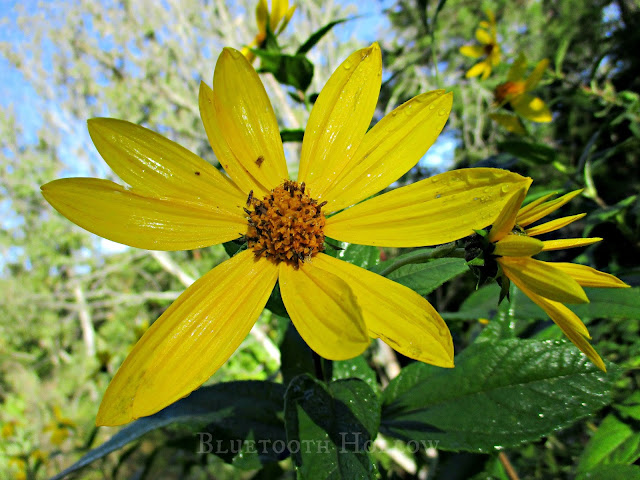 When it comes to wildlife, the showy blooms are a great attractant for pollinators, primarily native bees. Butterflies, wasps, beneficial flies and beetles can be seen visiting the flowers as well.

The foliage is consumed by a large variety of moth and butterfly caterpillars, such as the Silvery Checkerspot, which can sometimes be somewhat destructive.

Other insects such as grasshoppers, thrips, weevils, tree hoppers and aphids can also be found feeding on the plant.

White-tailed deer like to browse on the foliage, Pocket Gophers enjoy the tubers, and muskrats and beavers will use the plants to construct their dens and dams. Larger stands of Sun Chokes provide great cover and habitat for other wildlife. 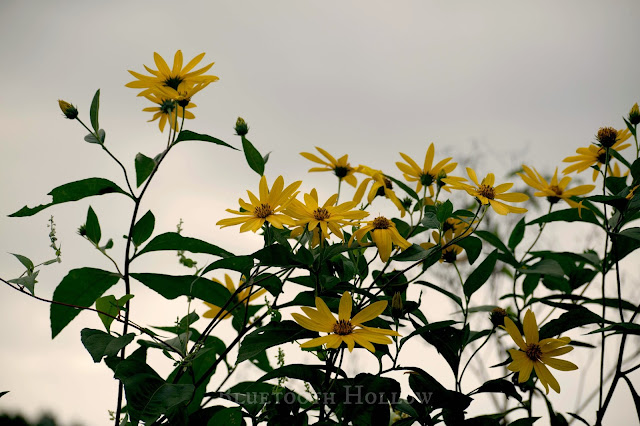 If you wish to include Helianthus tuberosus in your plantings, be aware that it can get pretty aggressive. In fact, I wouldn't plant it unless you were planning on harvesting it, and give it a garden bed away from your other plants.

Even if you don't intend on eating it yourself, your livestock will love it! Horses, cattle, sheep and goats love the foliage, and pigs go crazy for the tubers. The rhizomes can also provide a great winter fodder for your livestock, just leave them in the ground until you are ready to feed them, since they don't store well above ground. 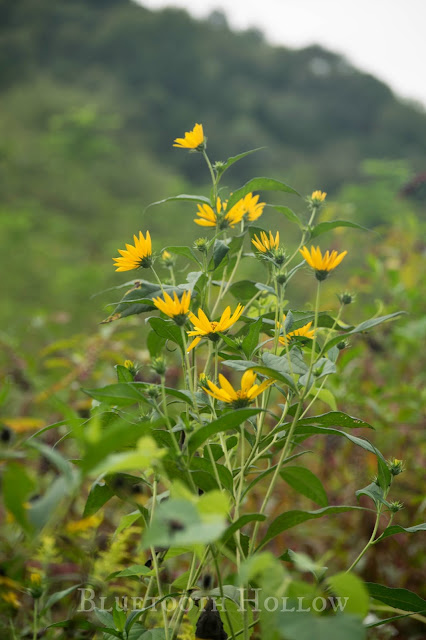 Even though the Jerusalem Artichoke isn't strictly native to most of the US, it has obviously been an invaluable source of nourishment for the human race throughout the centuries. 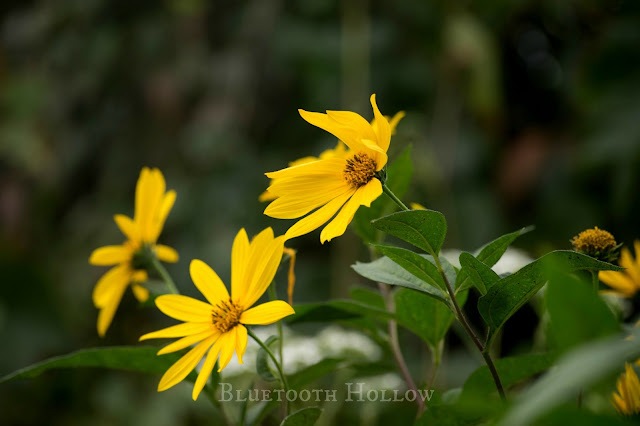 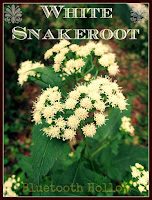 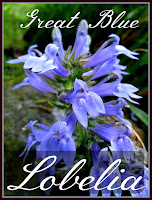