It has been a rather interesting week, around here.

It always seems like the crazy people come out in droves all at the same time. Is it the heat? The phase of the moon? Dunno.

Last week my sister's Pyrenees got hit by a car out at my parents' farm. Some loser sped right through and didn't bother stopping after he undoubtedly knew he'd hit the dog and left him flailing and yelping in the road.

It dislocated poor Fen's hind foot and the bone poked through the skin leaving a nasty wound. Luckily, because of the veterinary hospital my sister works at in Atlanta, she was able to get a good discount on his veterinary care - which will be extensive. He'll have to have multiple surgeries to make sure his ankle heals up properly.

On Sunday, we made our weekly trip to the farm to spend time with the family. Mark was working a split shift and took several hours off for lunch before heading back to the park later that evening.

After lunch I happened to walk out to the edge of the property and look over at our new house, and noticed two strange vehicles parked in our driveway. My first thought was that somebody had broken into the house and were stealing power tools and copper wiring.

I ran over to the house and let Mark know, and we went over to investigate. My dad recognized one of the cars as the woman who lived on the property next to us. We hadn't met her yet, but we were always curious about her living situation, as she didn't have a house, but was simply camping out in a lean-to.

Either way, I was livid that she and her guest thought it was okay to park in our driveway, blocking the entrance.

Mark walked down to talk to her (I stayed behind because I was pretty pissed and didn't want anything to escalate). Mark was in uniform, so she looked pretty scared when he walked up.

She was nice enough, apparently, and commented that she was glad to have a "safe neighbor."

She apologized over and over, saying she didn't know anybody owned the place. Which I don't buy - considering all of the noise that's been going on and that the grass had just been mowed.

She and her friend moved their cars shortly thereafter, and hopefully she doesn't try it again.

Nosy people that we are, we looked her up online to learn more about her (Mark considered running their tags to check for warrants, but decided that may not be the best way to make friends). Among other things, we soon discovered she was an outspoken vegan. Oh boy.

I can't help but wonder how she will react when she discovers we raise rabbits and eat them. I just hope she's not one of these crazy activists that tries to "set them free" or reports us to Animal Control or something (although I know for a fact that our AC officers would laugh in her face).

I'll hope for the best, and that we can make friends with her. Having good neighbors is such a blessing, especially in our remote neck of the woods.

So, that encounter made the day interesting enough, but it had only just begun.........

Later that night I was home and had just put Ian to bed. Around 9:30 Mark called and told me to lock all the doors. I could tell from the tone in his voice that something serious was going on. He let me know he had just caught somebody robbing the Park Office (about a 1/4 mile from our house) and chased after him into the woods heading in the direction of our house.

I was immediately scared for him, because I knew he was the only one on the park at the time.

Luckily, he called the other rangers for back up, as well as the Chief Ranger, the County, the Corps and TWRA. It made me feel better that he would have so much help.

He made the choice not to chase after the guy in the dark, since he didn't have a flashlight. The guy was wearing flip flops (LOL), so he wasn't going too far too fast.

I turned on all the outside lights (which are very bright) and listened for the dogs barking.

It took all of them (and the tracking canine) several hours to locate him, but in the end he just gave up.

It was easy to see why by looking at him - his feet were black with dried blood, and there was a huge gash on the top of his foot.

He lost his sandals pretty early in the chase, and ran several miles through the steep, dark woods (full of brambles, barbed wire and rocks) and along the road barefoot. He also collided full force into one of the guard rails, evidently catching his foot on an iron bolt or something.

Luckily, other than initially bolting from Mark when he tried to arrest him at the office, he was non-aggressive and cooperative with the officers; otherwise so many things could have gone wrong.

Mark later learned that there was a hidden crowbar easily within the man's reach when he surprised him going through the safe.

The guy's girlfriend was also arrested, as she was hanging around waiting to pick him up. Luckily Mark had confiscated the guy's cell phone before he took off, otherwise he would have been long gone.

After the search, the arrest, the trip to the hospital and booking him into jail, Mark finally got home at 5:00 AM and went straight to bed. So I spent several hours in suspense waiting to hear the story that morning.

Things turned out as best as they possibly could, and nobody got hurt.

Well, except for the perp, that is.


Mark asked him if running had been worth it. The guy hung his head and said, "No." 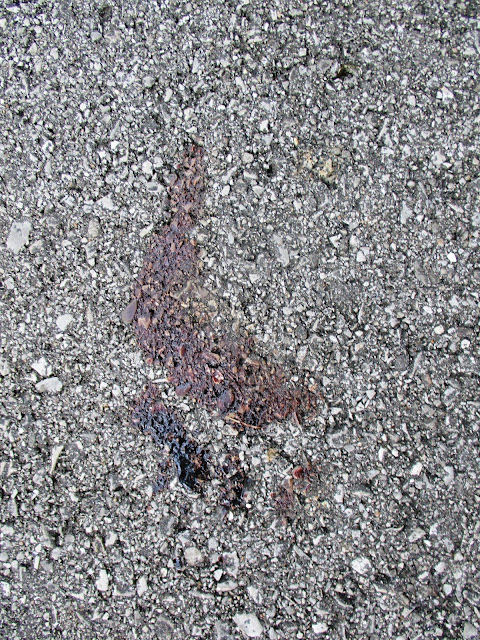 We also learned that he had narrowly missed stepping on a huge copperhead crossing the road.

I'm very proud of Mark for the way he handled his first two arrests at the park (even after 13 years of service).

We weren't the only ones who had a close brush with criminals that night.

I found out the next morning that somebody had broken into my brother's car and stolen work tools and his laptop (too far away for it to be related).

I hope things have been calmer for you, wherever you are. Never a dull moment, that's for sure!