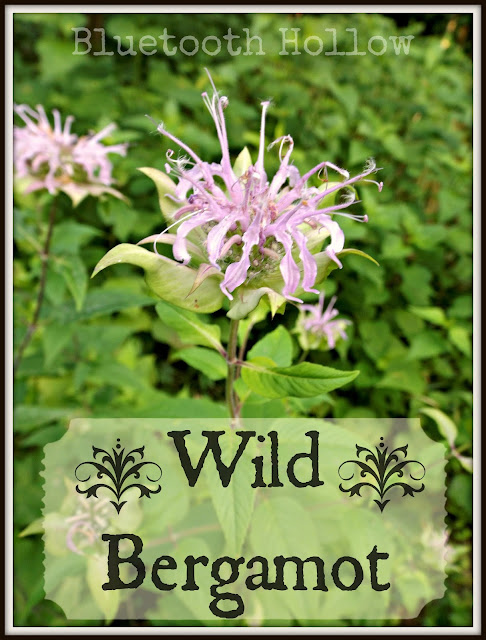 There are many mints that grow wild or feral throughout North America, and this one can be found in practically every state!

Wild Bergamot, or Monarda fistulosa, isn't too particular about its habitat. It likes to grow in dry clearings, roadsides and forest borders throughout its range, which includes nearly all 50 states and southern Canada. 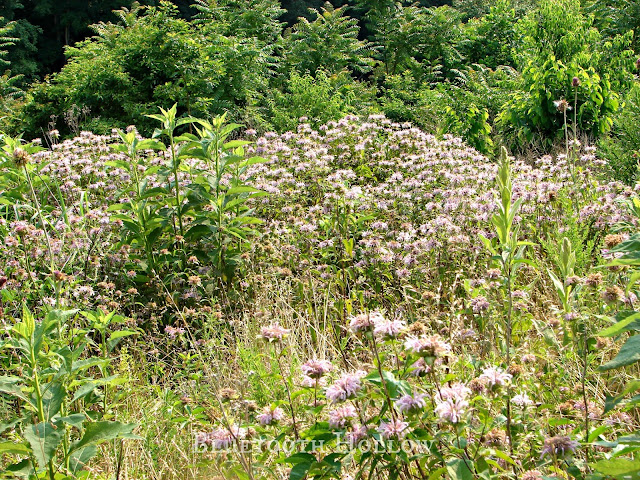 It isn't fussy about soil type, as long its feet stay reasonably moist and well drained.

It grows 3 - 4 feet tall, usually branching into multiple stems, and has opposite leaves that taper at the tips. 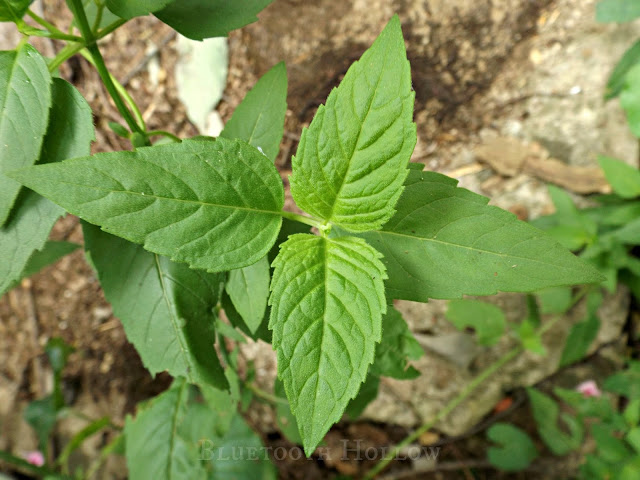 Like all mint species, it has a square stem (while this can be one way to help identify a mint, there are plant species that are not mints that have a square stem).

In mid-summer, the plants are crowned by distinctive, aromatic, pale to bright lavender blooms. 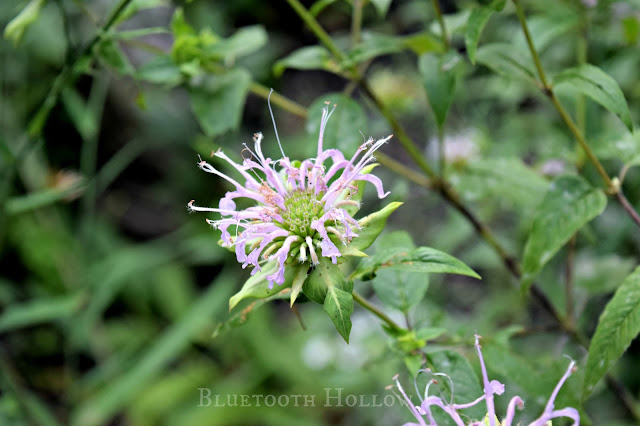 The flower heads are composed of numerous 2-lipped corolla tubes, which are filled with tiny white hairs.

The leafy bracts at the base of the flowers are usually tinged with pale purple, making an all-around very attractive plant.

The 1.6 inch flower heads bloom from the center outwards, beginning to look as though they are balding as they fade. 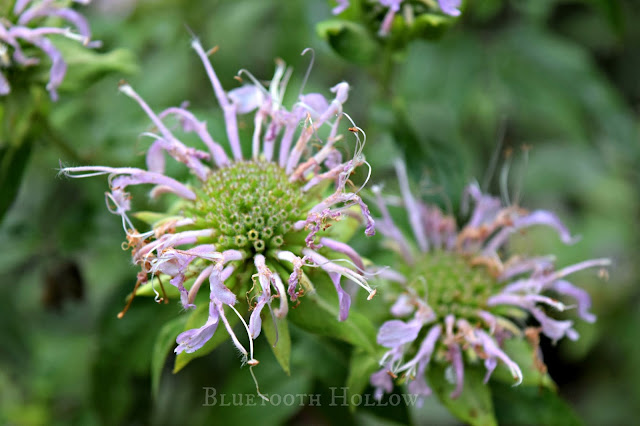 They self-seed quite readily as well as send out runners, so they can form nice stands if allowed to spread, although they aren't nearly as invasive as some of their mint cousins.

Speaking of which, the mint family, or Lamiaceae, is an enormous, broad sweeping group containing over 7,000 species, worldwide!

I could spend a lifetime discussing the merits and uses of the various mints found across the globe, but we'll just stick to one of them, today. 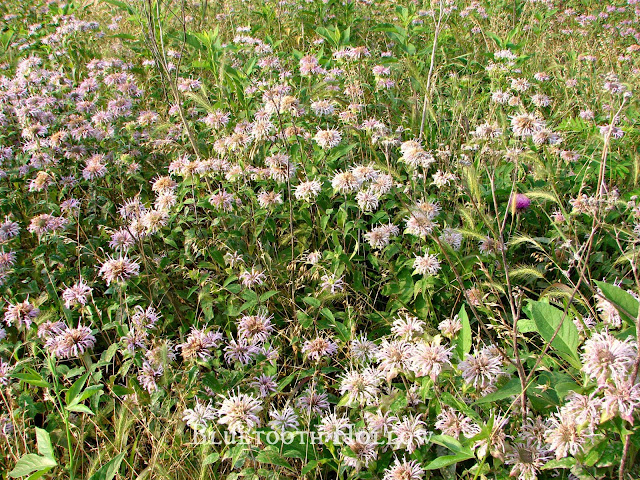 Wild Bergamot is known by many names.

The name Bergamot is referencing its volatile oil, which has a flavor and fragrance very much like bergamot orange (Citrus bergamia), a bitter fruit that is used to flavor Earl Grey tea, among many other things.

It also goes by the name Bee Balm, since the blooms are eagerly sought out by bumblebees (as well as butterflies!). 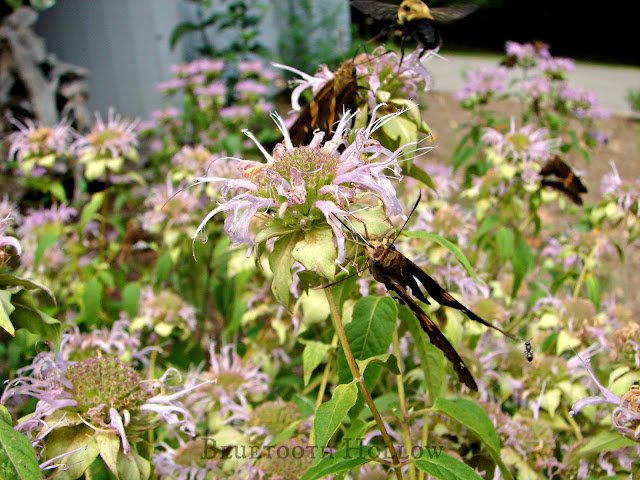 Its Latin name is Monarda fistulosa. The genus pays homage to the Spanish botanist Nicolas Monardes, while fistulosa is Latin for pipe or tube, referencing the unique hollow blooms.

There are 7 species of Monarda in Tennessee, and at least 21 nationwide.

Lemon Mint (Monarda citriodora) is a beautiful species with a pleasant lemon aroma, which can be found growing wild in the southern half of the US. (It is actually a prairie resident that has escaped eastward.)


Oswego Tea (Monarda didyma), or Crimson Bee Balm, is a popular bedding plant that is native to the Eastern United States and the Pacific Northwest, and can be found growing in the higher elevations in TN. (This one is most famous for its association with the Boston Tea Party in 1773, as its leaves were often used as tea substitute.)


Spotted Horsemint (Monarda punctata) is an especially showy Monarda found in sandy soils from New Mexico to Florida, much of the eastern US and northwards into Canada. It is considered a rarity in TN.

All members of this genus are excellent for attracting a wide variety of pollinators, and make a pleasant mug of tea.

Wild Bergamot and other wild mints can be used just like their tame counterparts.

To make a tea, simply steep the fresh leaves in hot water for 10 minutes.

The more pleasing the fragrance, typically the more tasty the resulting tea.

Chopped fresh leaves can be sprinkled on fruit dishes, sauces, desserts, cooked into meatloaf and added to salad dressings and cold drinks.

The flowers are both lovely and flavorful tossed raw into salads, mixed into butter and sprinkled onto soups and beverages. 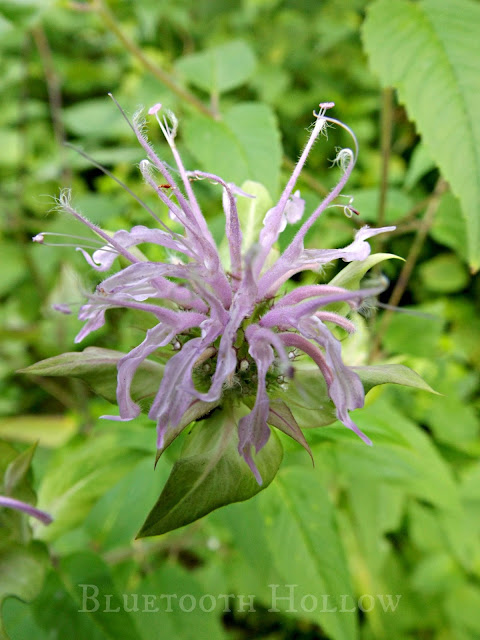 The leaves and flowers can also be dried for future use, and added to sachets and potpourri.

Wild Bergamot is strongly aromatic, and has a spicy, pungent flavor akin to oregano. (In fact, in the Southwest it is known as Oregano de la Sierra.)

In addition to its culinary contributions, Wild Bergamot has had many medicinal applications.

Because of its broad range, numerous native tribes employed Monarda fistulosa for their healing arsenal. 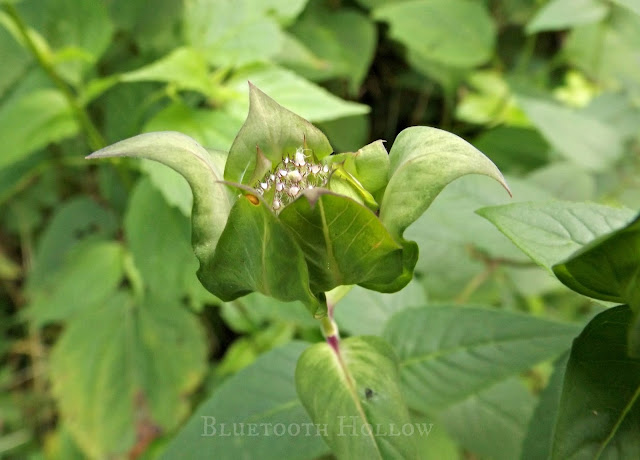 The Muskogee tribe called Wild Bergamot Sweet Leaf, and it was (and still is) one of their most sacred healing plants.

Like many ethnic groups, they relied on the Doctrine of Signatures to determine a plant's healing properties.

Because of its tube shaped flowers, it was believed Wild Bergamot was good for  treating "diseases of the tubes," especially the inner ear. The leaves resemble the human lungs, so it was used to treat tuberculosis. 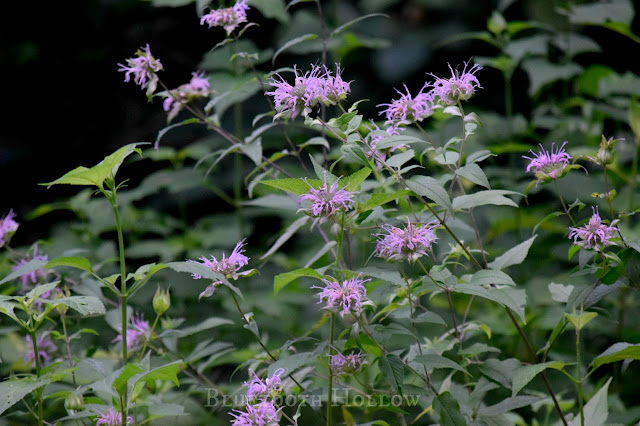 The purple color told them that it was good for treating the heart and nerves.

And lastly, the appearance of the flowers suggested a "person with their hair standing on end," thus it was thought to be useful in treating nervous conditions.

A strong tea added to bathwater is said to have a powerful calming effect. 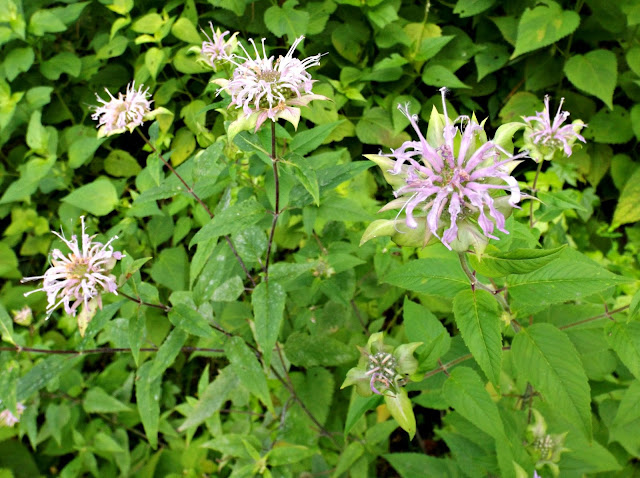 The Cherokee had many of the same uses for Bee Balm, in addition to making a leaf tea to treat measles, a warm poultice for headaches, and a root infusion for nosebleeds,

Many other tribes used Wild Bergamot in the treatment of a wide range of digestive complaints, as well as for treating colds, headaches, kidney pain, fever reduction, and for soothing sore throats.

The leaves contain the essential oil Thymol, which is useful for expelling gas from the digestive tract.

It was also used externally in the treatment of skin eruptions, cuts and bruises, and as an eye wash. 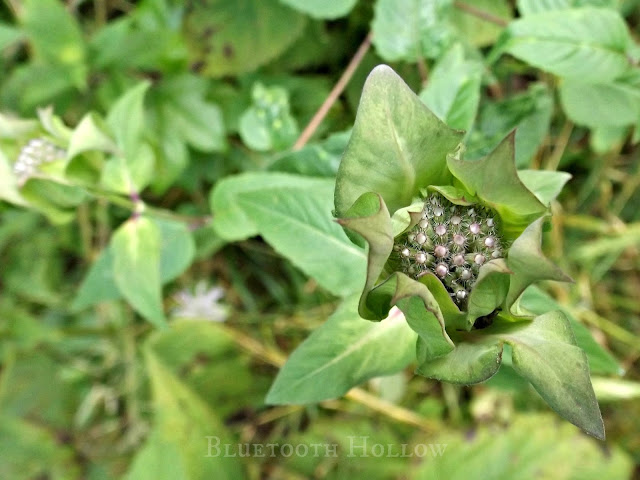 Any of the Monarda species make a most excellent garden plant, and often come in a variety of colorful cultivars. 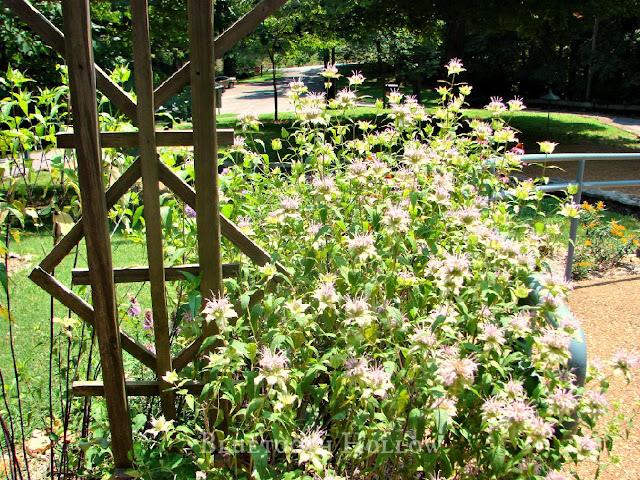 In addition to providing us with the occasional cup of tea, Wild Bergamot is great for attracting many types of pollinators, especially bumblebees, hummingbirds and long-tongued butterflies (they are the only ones that can reach the nectar).


As long as it is planted in a reasonably moist, sunny, well-drained spot with good air flow, it is a very hardy plant and tolerates drought well.

Its only weakness is its propensity for powdery mildew when under stress.


If you dead-head the spent flowers, you will usually get a second flush of blooms. Once they go to seed, Goldfinches and other birds enjoy eating the seeds.

Consider including Wild Bergamot or one of its close cousins in your gardens. I promise you won't regret it.

Whether you plant Wild Bergamot in your garden or stumble across it growing wild, it is a lovely and useful plant that deserves recognition. 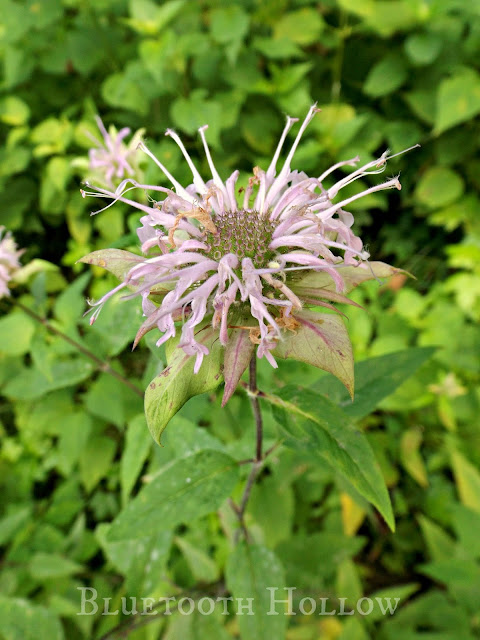 Be sure to join us for next Wednesday's Wildflower 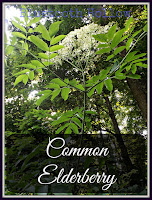 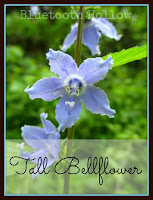 Cherokee Plants and their Uses - a 400 Year History - Paul B. Hamel & Mary U. Chiltoskey