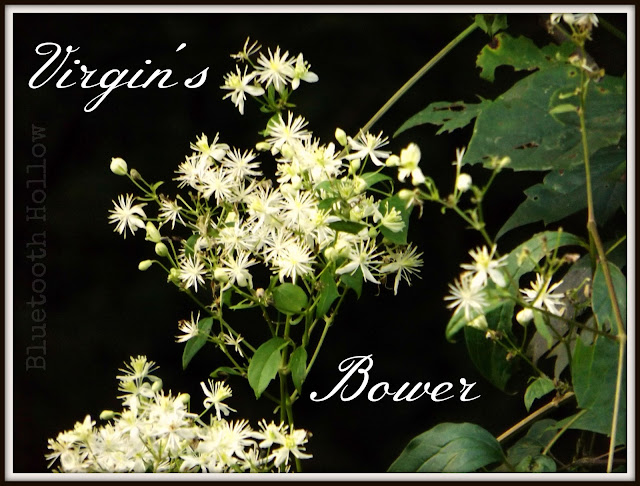 Many of us are so familiar with cultivated plants that we take for granted that they were once wild and untamed.

We never stop and think that their wild cousins are right beneath our noses or climbing above our heads.

One of these plants is Virgin's Bower, or Clematis virginiana. It is indeed a Clematis, and a close inspection yields the similarities. 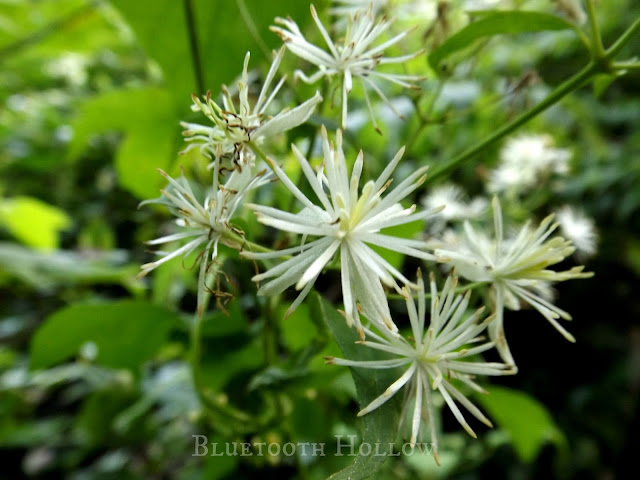 It is a denizen of moist forests in the eastern United States, its range extending north to Canada and south to Texas and Florida.

Virgin's Bower can be found draped over trees and shrubs along forest edges, stream banks and fence rows, using large plants as its trellis, although it isn't above trailing along the ground. 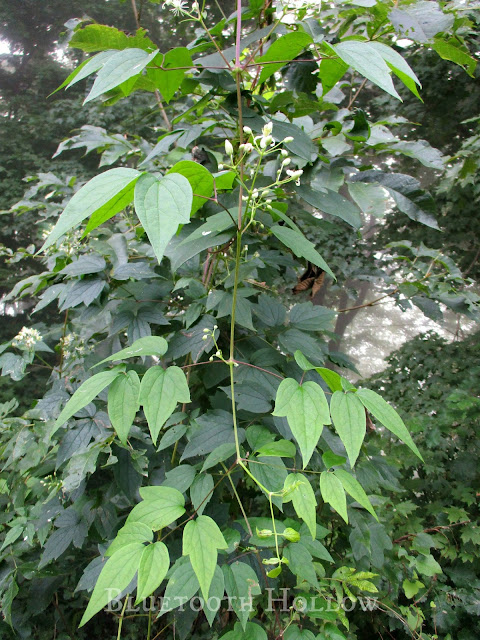 Its vine could be easily overlooked as we stroll through our eastern forests. Growing from 12-15 feet long, the angled stem is covered in long-stemmed 3-toothed, ovate leaflets. 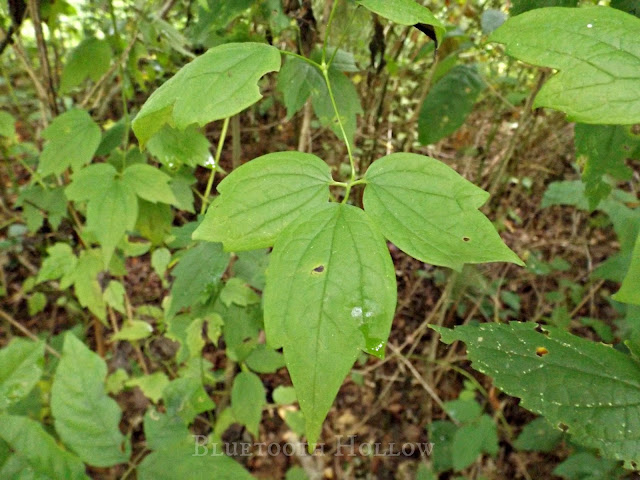 The vine's new growth is relatively weak and thin, turning woody after about three years. It climbs not with tendrils, but by twisting its leaf stalks around its supports. The new leaf stalks rotate in a circle, completing a revolution every 5 or 6 hours, until they find an object to latch onto. 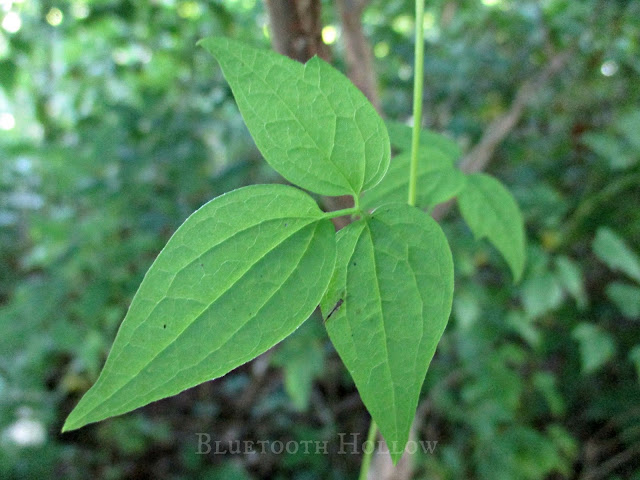 Although it can occasionally smother its living trellis, it is not parasitic, deriving no sustenance from its "host."

It is when they bloom that they are likely to capture your attention! In late summer the vines are covered in numerous showy, fragrant white flowers an inch across. One might even mistake this little Clematis for some type of exotic wild Jasmine.


The 4 petal-like sepals spread widely and are a shade of pale cream. 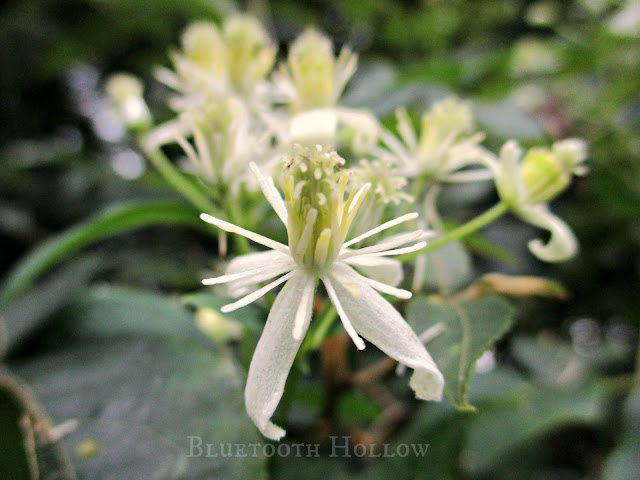 The genders of the flowers can get rather confusing.

Depending on this identity, the flowers will look different, under close observation.

Staminate flowers are the showiest, with their abundant long stamens with white filaments and pale yellow anthers. 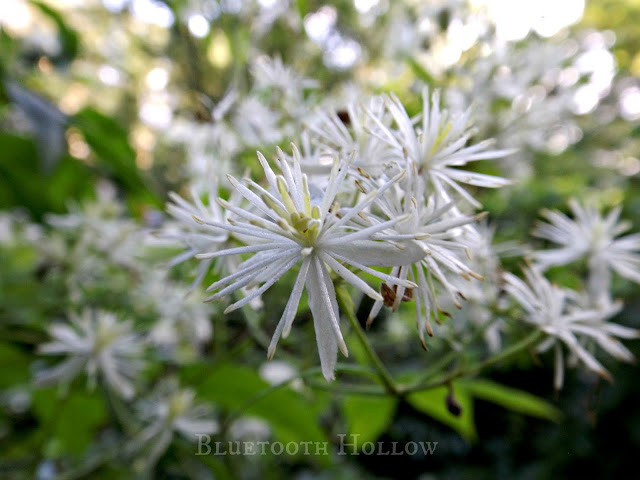 Pistillate flowers have a cluster of green carpels in the center, and each carpel has a short, curled style. These are surrounded by a cluster of sterile "pseudo-stamens."


Perfect flowers have a cluster of green carpels surrounded by two rows of stamens.

And we thought human reproduction was complicated!

Like our domestic garden variety Clematis, the seeds are just as showy as the blossoms - composed of numerous achenes, each with a long, silky tail.

Clematis are in the buttercup family, or Ranunculaceae, which contains a staggering variety of plants.

The Clematis genus contains over 250 species, mainly restricted to temperate regions in the Northern Hemisphere. Most of our familiar cultivated varieties originated in China, having been developed in Japanese gardens before making their way to Europe in the 18th century.

There are many native Clematis species to be found in the United States, including several interesting varieties in the Southeast.

Leather Vasevine (C. viorna) is one of them, and can be found growing in wet woods in the mid-South.


A similar Clematis, known as Leatherflower (C. pitcheri) is quite rare in my state (TN) but fairly common in the central US.

There is also a western equivalent to C. virginiana, and that is C. ligusticifolia; also known locally as Virgin's Bower, but more commonly as Pepper Vine.

The origin of the word Clematis is Greek, describing a vine with "long, thin branches."

Like practically every member of the buttercup family, Clematis are toxic. 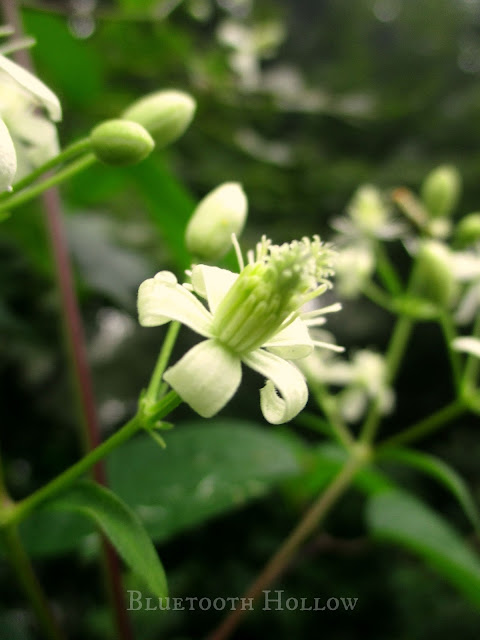 However, do you remember the Western Virgin's Bower, and how it was also called Pepper Vine? Its seeds were once used as a pepper substitute by early pioneers and Western explorers. The whole plant has an acrid, peppery taste, however it can cause internal bleeding in large amounts.

All clematis species contain an essential oil that is very irritating to the mucus membranes and can even cause skin irritation. 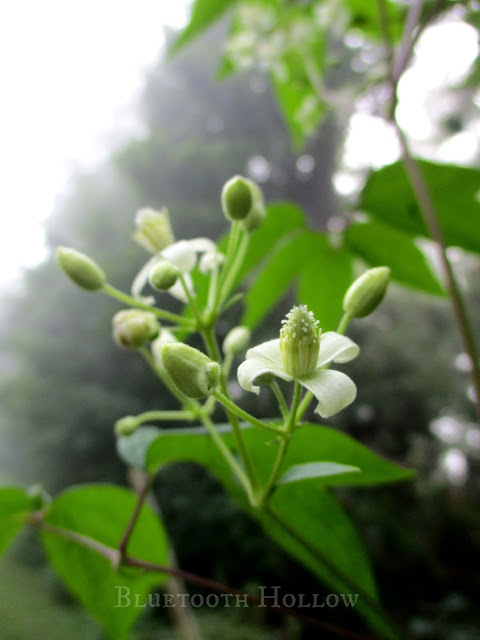 Despite its mild toxicity, it was valued for medicine by indigenous tribes.

The Cherokee would brew a root tea to aid the kidneys. They would brew a warm infusion with Milkweed to treat a backache. A root infusion was made to cure stomach troubles, and a tea was brewed to help calm the nerves.

Other Clematis species, both on our continent and others, have had some type of medicinal use. 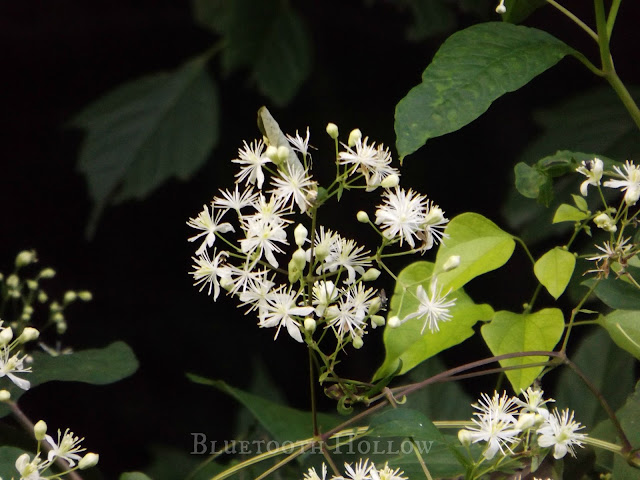 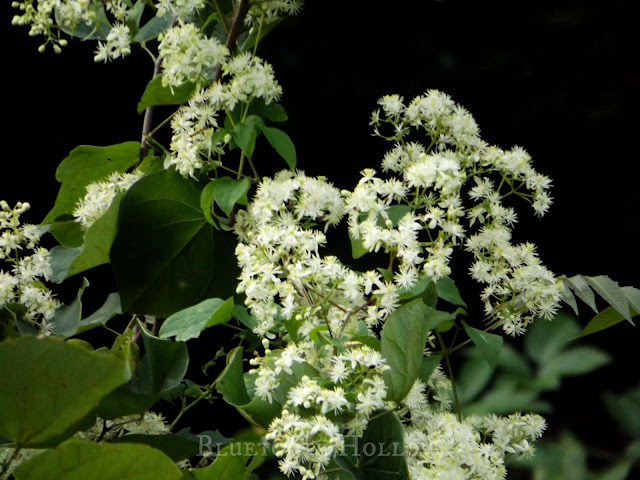 Some Asian species have been used in the treatment of dysentery, neuralgia, leucorrhoea and a host of other ailments.

When it comes to wildlife, Virgin's Bower in bloom is an oasis of pollinator activity, attracting numerous species of bees, moths and butterflies, and even hummingbirds. 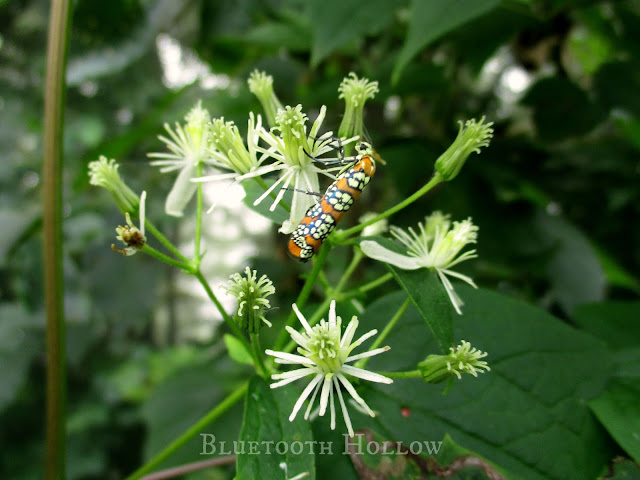 Butterflies swarming over plumes of Virgin's Bower high in the trees is such a serene and ethereal spectacle. 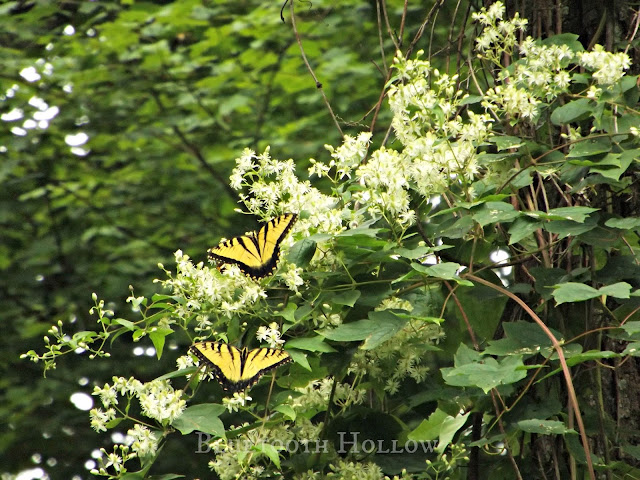 It makes a lovely addition to your landscaping, providing an attractive and fragrant showpiece on an arbor, fence row or trellis. 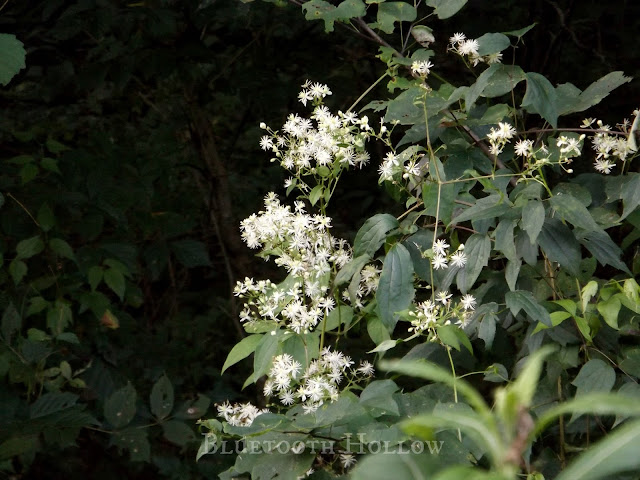 Like domestic Clematis, give it moist feet and sun on its blooms and it will stay happy.

The beauty and purity of Virgin's Bower rivals any expensive cultivar, and is always a welcomed discovery when we happen upon one during a Summer stroll. 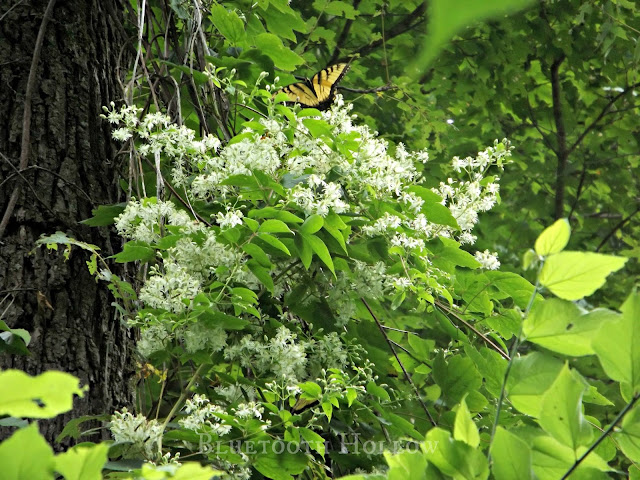 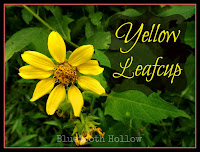 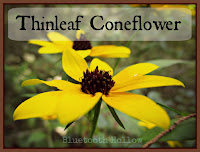 Wildflowers of Tennessee - Jack B. Carman