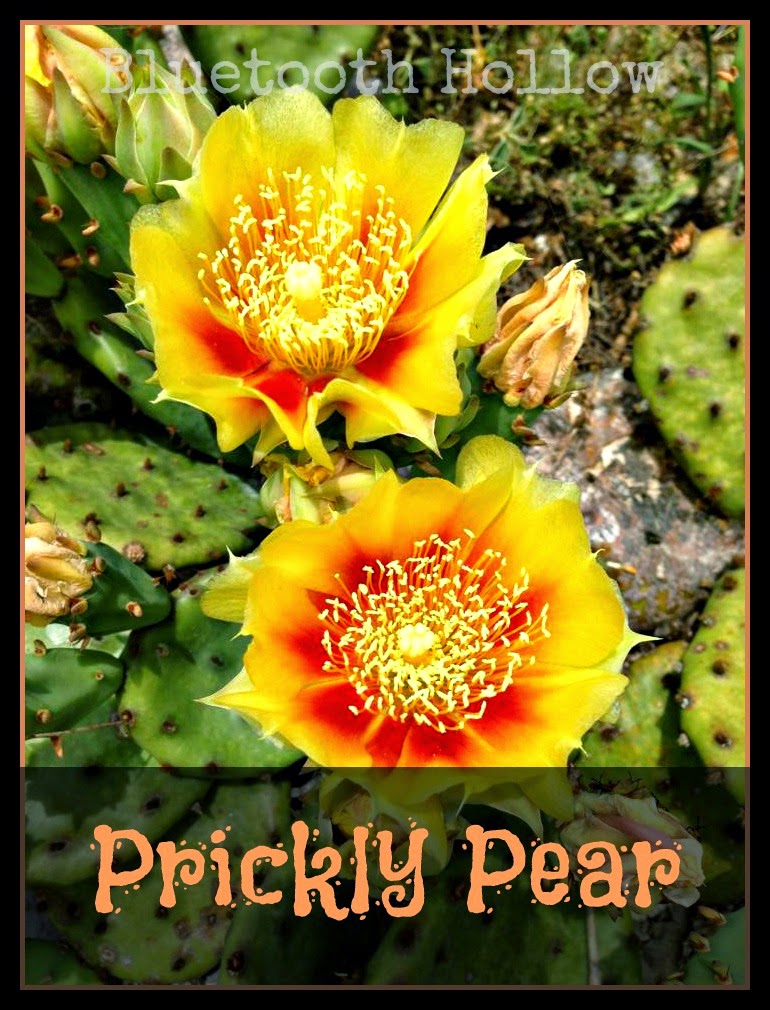 Sorry Wednesday's wildflower is so late this week!!

There are many who are surprised to find that there is a cactus native to the eastern US!

Prickly Pear can be found all along the east coast, south to South Carolina and west to Minnesota.

It is a smaller version of the western species, up to 8 inches tall with a sprawling growth habit.

Like its Western cousins, it prefers warm, dry growing conditions, so it is best found where the soil is porous and thin.


In Tennessee, it is a common denizen of Cedar glades and limestone bluffs, and can even be encountered growing in forests.

Like many cactus species, they have adapted to life without leaves. Their fleshy pads are far more efficient at storing water during times of drought. These soft, edible structures would be very vulnerable were they not armed with long spines and bristly, irritating hairs.

Prickly Pears typically bloom in early summer; and just like most cacti, the blossoms are show-stoppers! 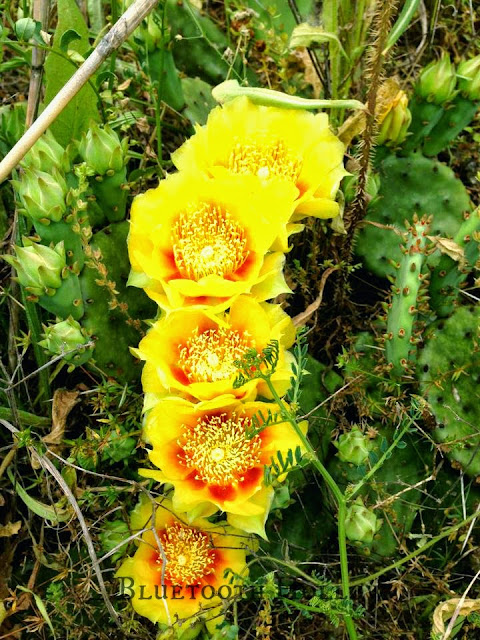 Radially symmetrical, they blaze bright yellow and occasionally sport red centers. The blossoms are enjoyed by a variety of pollinators, including butterflies and hummingbirds.

Once the blossoms fade, they are replaced by red, club-shaped fruits that ripen in late summer.

Virtually every part of the plant is edible, although harvesting can be a little tricky.

While the long spines look intimidating, they aren't the ones you need to worry about - it's those tight bunches of tiny barbed hairs. Once they get into your skin, they cause a surprising amount of pain and irritation. It takes tweezers, patience and maybe even a magnifying glass to remove them all.

To help avoid this misfortune, be diligent to handle the plant with gloves, and even then, be cautious of the spines as they can pierce rubber and leather. 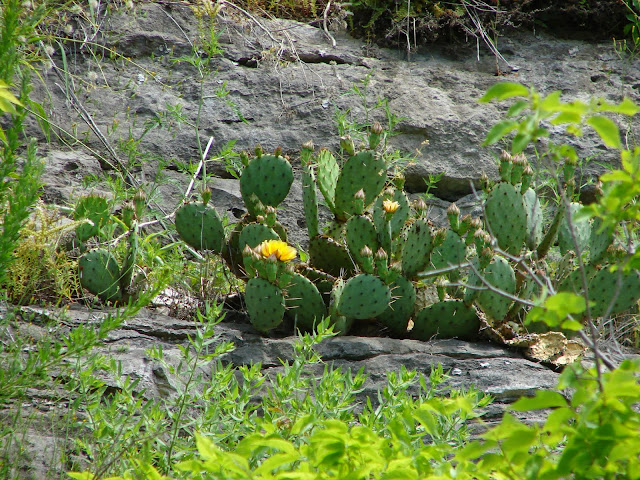 You can take a damp towel and vigorously rub the fruit to help remove the bristles. Then you must peel the skin off before you attempt to eat it. The pulp can be eaten as is, or you can remove the seeds and use it for sauces, puddings, beverages, or any other fruit recipe. They are high in vitamins and minerals, especially potassium and beta-carotene. (Prickly Pear fruit has the same effect on humans as eating beets, so don't be alarmed if you have red urine after eating!)

The seeds can also be used for food. They can be ground into a flour and used as a thickener, imparting a nutty flavor as well as protein and healthy oils.

The tender young pads are supposed to make a nice, mucilaginous vegetable, prepared as you would green beans. 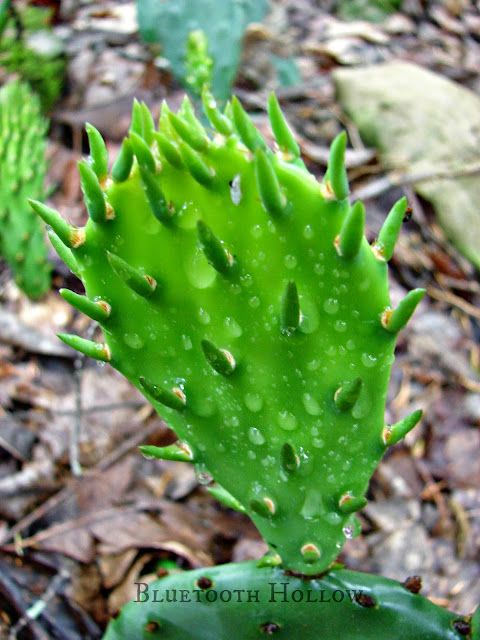 Even the mature pads can be used as food, and are traditionally prepared by singeing them over a fire (or your could use a blow torch). Much like ocra, the pads have thickening properties. If you dislike the slimy quality of the pads, they are reportedly much better sliced and pickled.

Besides being a valued food source, Prickly Pear has been esteemed as medicine for centuries.

The mucilaginous pads were especially good applied externally to wounds, burns and sores, having a soothing effect.

Juice from the fruits was used to treat warts.

A tea brewed from the pads was given to aid the lungs. 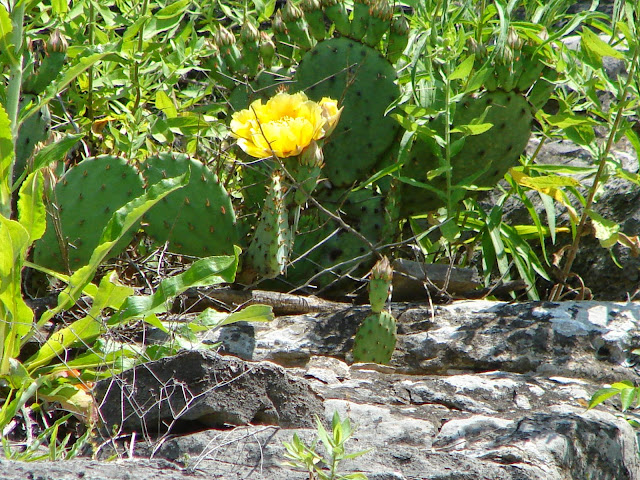 In its Latin name, Opuntia humifusa, humifusa means "spreading," in reference to its growth habit. 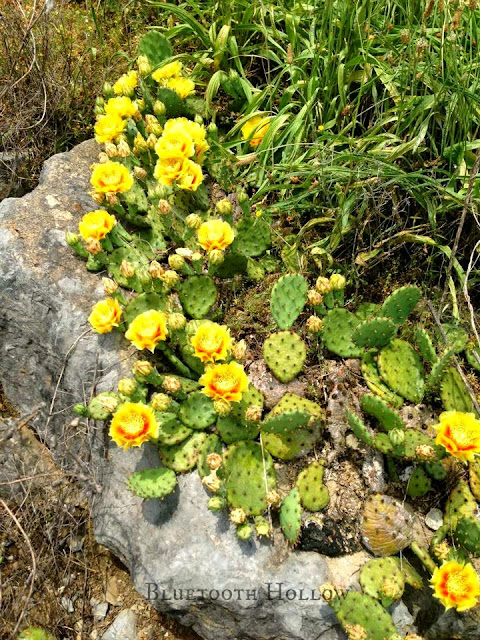 When you enjoy Prickly Pear's exotic blooms or bite into its fruit, it's easy to get whisked away to some desert in the American Southwest.

However, when you have another look around you, you can marvel at the diversity of our Eastern forests and the surprises that often reside there. 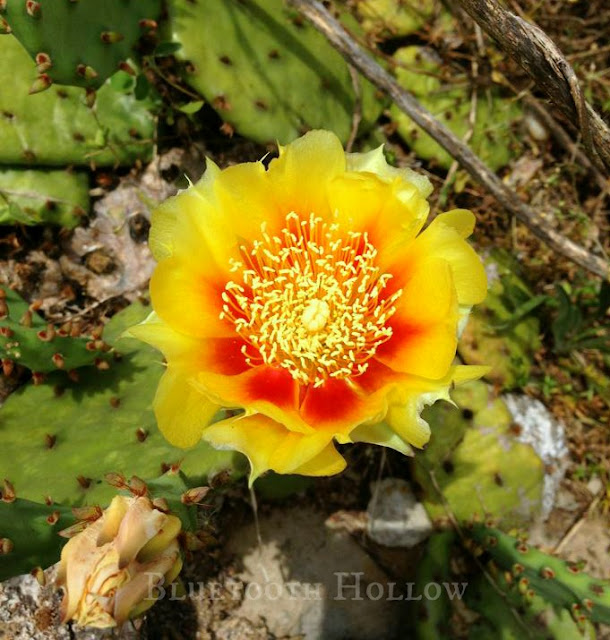 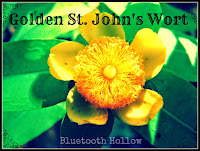