I wish this was an actual post about juggling rabbits. That would be amusing.

No, sorry - just trying to come up with a creative title for a fairly mundane post.

By the way, Mark gave me a Mother's Day gift early: 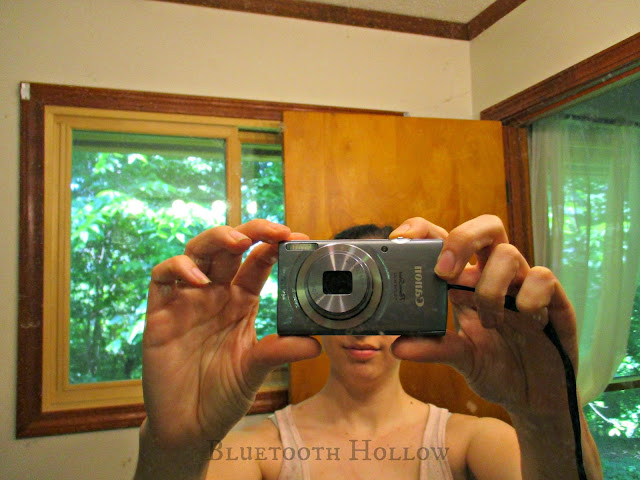 He wants me to play with it some and see if I like it. So there will be a lot of pictures in this post!

So far, it isn't bad, but I don't like it as much as the Nikon Coolpix I had last. The picture quality isn't as crisp, and it's completely automatic. There are no extra settings, which is kind of annoying. Lastly, I'm not as impressed with the macro. 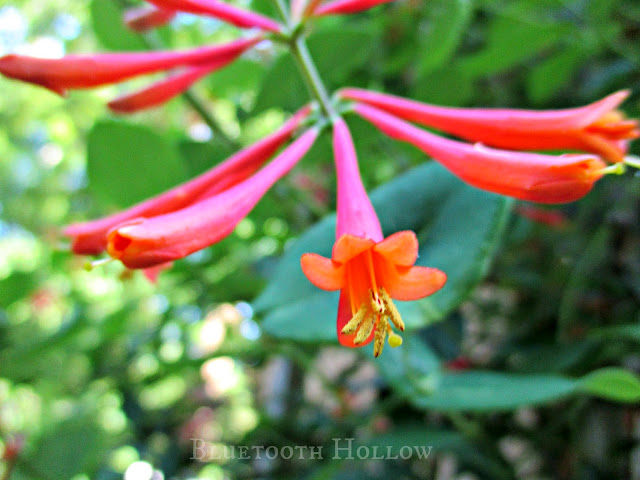 I have 13 days left to decide, but I think I would be happier with something closer to what I had last time. But I'll keep playing around with it. (Maybe I'm just too hard to please, lol!)

We were hoping to have processed our excess 6-week old bucks by now, but alas, time constraints prevail as always.

I had also hoped to hang more cages. The latter also hasn't happened, due to the former.

But I HAD to separate out the grow-outs. They were getting entirely too crowded in their cages (especially Acer's 11!), and with the unseasonable heat, I knew they were getting increasingly cramped and uncomfortable.

So I rounded up all my culls and hauled them over to the lonely grow-out pen. 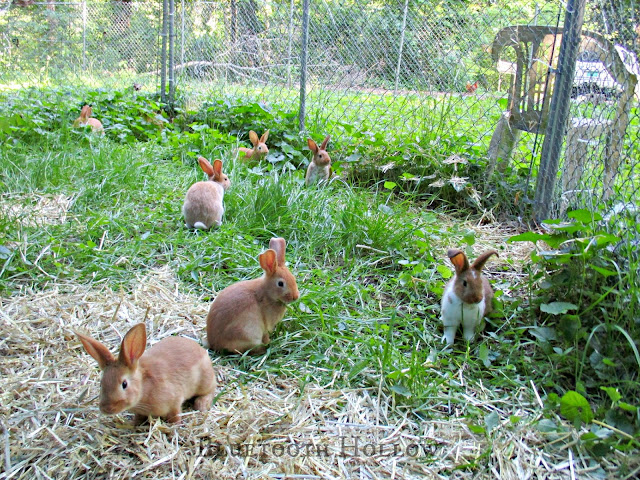 I never got to disinfect the floors as I intended, but since these guys will be going into the freezer very soon, it shouldn't matter too much. 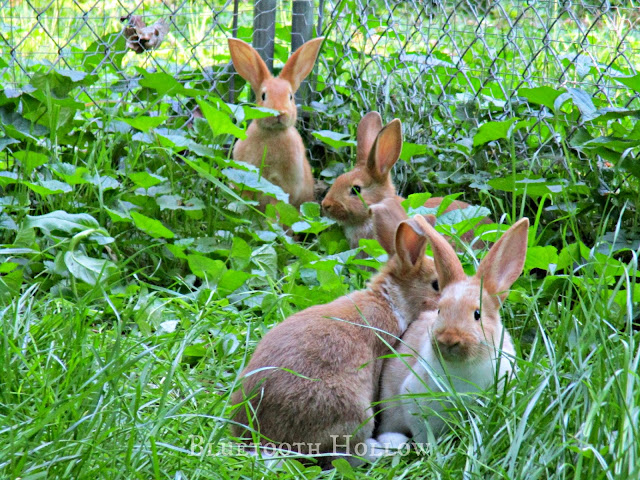 As you can see, it's become a bit of a jungle in there since the last time it was occupied. Not that they mind.


They are also sharing their space with Babette and her litter. 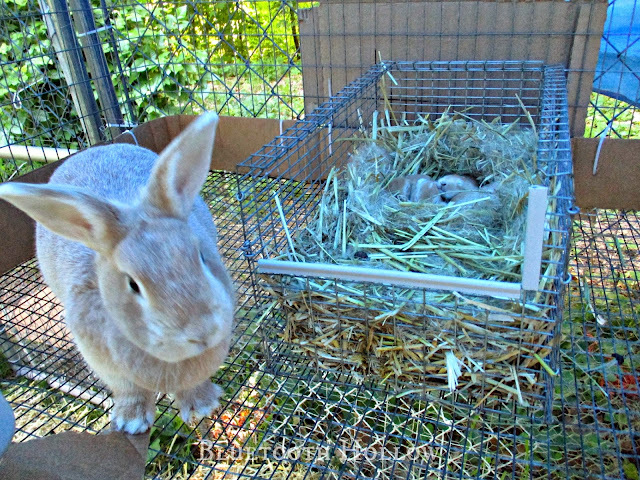 It's funny the things Ian picks up from watching me. 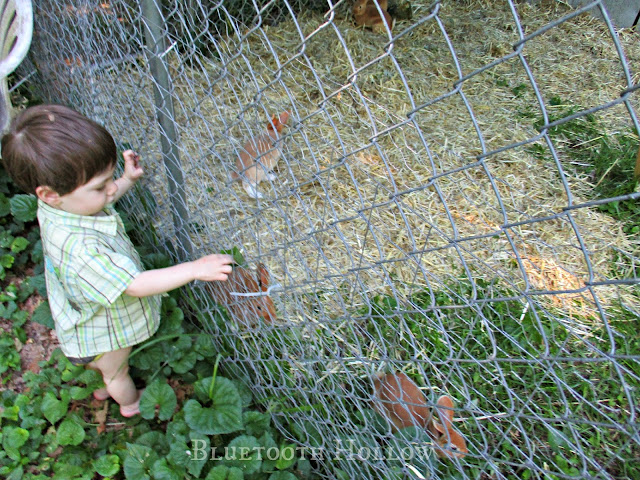 He managed to squeeze through the gate behind me...


I promptly removed him, since he likes to "pat the bunnies, firmly."

By the way,  as I was going through Acer's litter to divide the does from the bucks, I discovered I had SEVEN does, instead of 6! She was the one I was having difficulty discerning last week. I found out I was pressing too hard on her, um - lady parts. A little less pressure and, aha! a taco!

My cup runneth over.

So I have 7 NZ x does to choose from, the NZ pair going to Chattanooga, and one broken red buck I really like.  He's the biggest and fastest growing, and I really like his looks. But I don't need anymore bucks! I may offer him for sale. He would make a great herd sire for somebody. If not, he will make a nice meal. No real loss on my part, I guess.


She isn't nearly as snotty, but is still having sneezing fits. 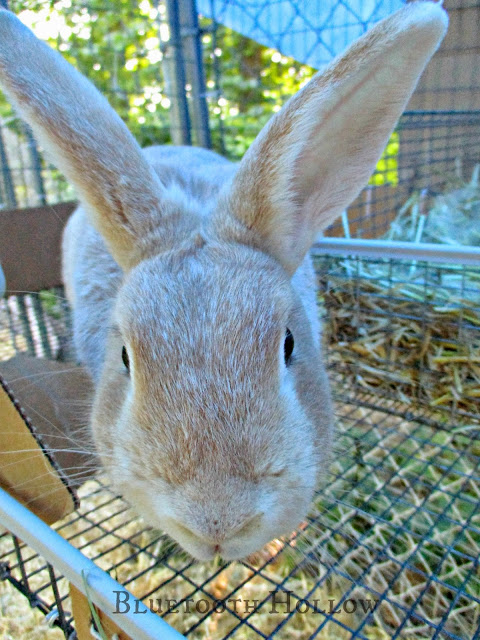 Ha, later I went back out to check on everybody and a certain tubby lady was out hangin' with the grow-outs... 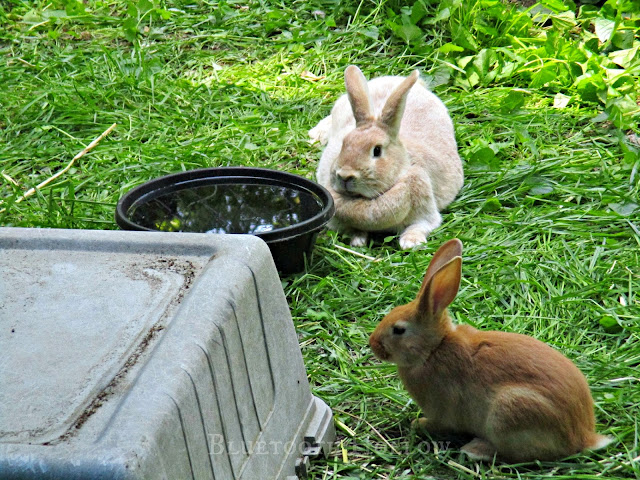 Yep - the perpetually distracted mom forgot to close her cage door again. Oh well, at least she was contained.

Ugh - looking ahead at the forecast, we aren't going to have a break from the heat for awhile. I wasn't exactly ready for summer yet. 90's?! COME ON!  It's early May and we've already caved and turned on the AC.

Oh well. The buns have their AC at least... 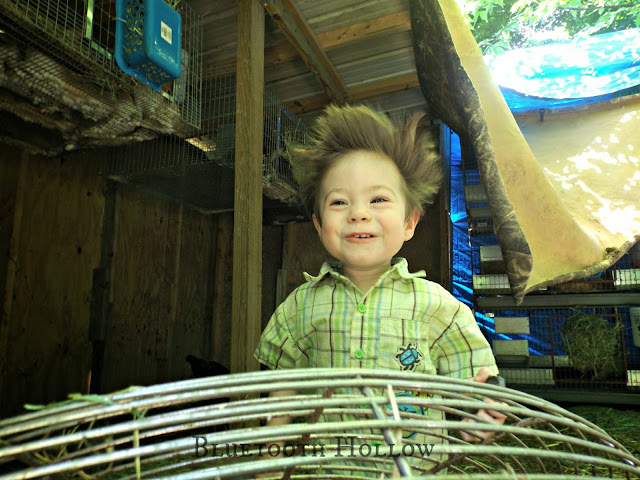