Comparing Cameras - and an update

I hope you're in the mood for pictures today, because it's going to be a photo bonanza!!

It's been nice having my own camera again! I have so many great photo opportunities throughout the day - what with a cute kid and animals and nature everywhere.

Even though I've been enjoying the Canon PowerShot ELPH 60, I'd like to exchange it for something different, since it isn't quite up to par with my standards.


Here's what I don't like:
Now, I'm still learning about all the technicalities when it comes to cameras and photography, but I know what I want out of a camera and I know what looks good!

Here is the best shot I've pulled out of it so far:

Pretty nice, huh? Now let's compare, for a second, with other cameras I've had/used in the past:

My last camera that I really enjoyed was a Nikon Coolpix L22. It was small and portable, had multiple settings and one HECK of a macro! The zoom was poor and it wasn't great at capturing motion, but I was still happy overall with its crisp, vibrant images.

My fist "nice" camera was a Kodak P850, and it was pretty awesome. I never even really unlocked its potential before it died on me, but this amateur still got some nice shots out of it. 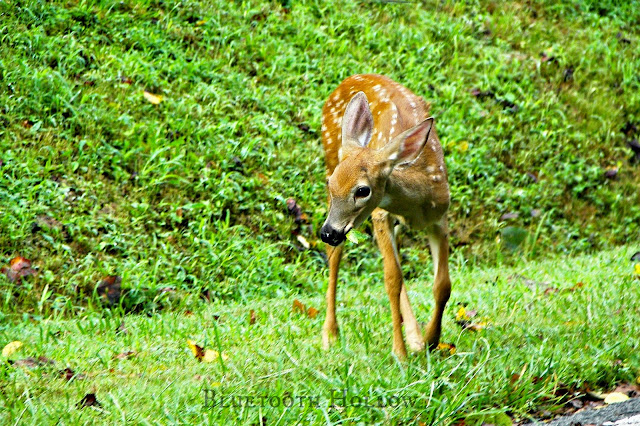 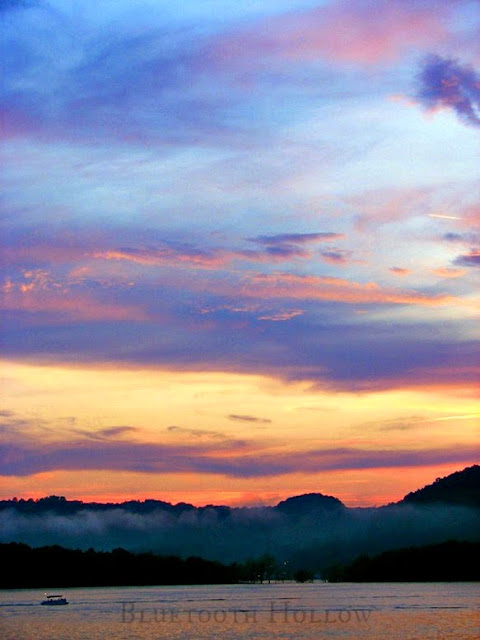 Another camera that I really enjoyed was a Sony DSC-H2. This one was bought by the park for the rangers to use (which really ended up being myself and Mark), and it took some kick-ass photos!

The latest one that Mark purchased is a Fujifilm FinePix S4850, and if the stars and moon align just right, it can take some pretty good photos. 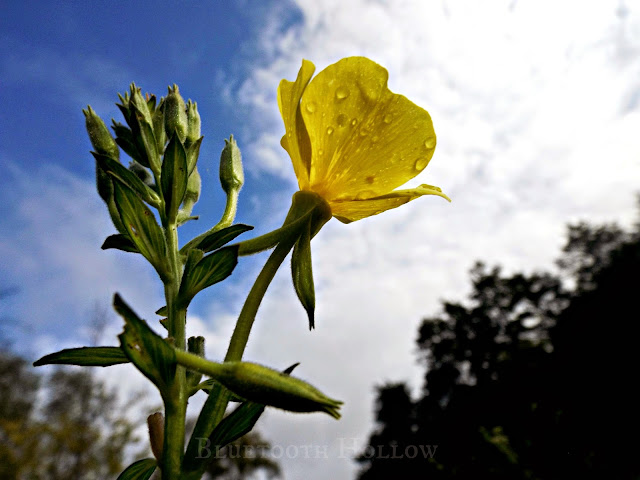 But this thing is SLOW. I guess it's the amount of time it takes to process a picture, but you will click the button and wait, and wait and WAIT for it to respond. Which is extremely frustrating when you are trying to get a shot of something. We've also had to send it back to the manufacturer TWICE to fix issues with it. Then, the strap fell apart and it hit the pavement a couple of weeks ago. Now it is permanently stuck in the Automatic function. So, not completely happy with that one.

Mark is waiting on his paycheck from his stint as Interim Park Manager so he can sell the FujiFilm and purchase his long-awaited DSLR - sort of a consolation prize, if you will. :) Of course, that's what I really want too, but we can't exactly each get one. Maybe he'll let me borrow it on occasion. But...... probably not. :)

So anyhow, the rest of the photos for today's post were taken with the new Canon, so maybe you'll see what I'm talking about. 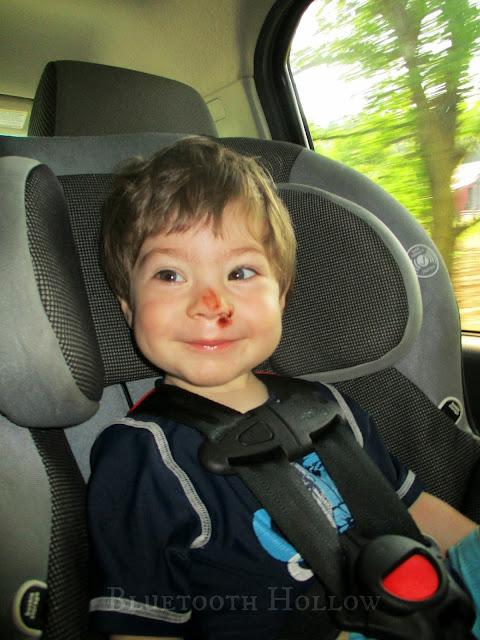 Ian took a tumble off the porch stairs onto the concrete, and got himself one heck of a busted nose (this was taken the day after). I was hoping to get some good Mother/Son photos in the spirit of the holiday, but it just didn't happen. Oh well. Poor kid, I actually had to give him Tylenol for the first time ever.

He and I did go creek wading at the farm, though. 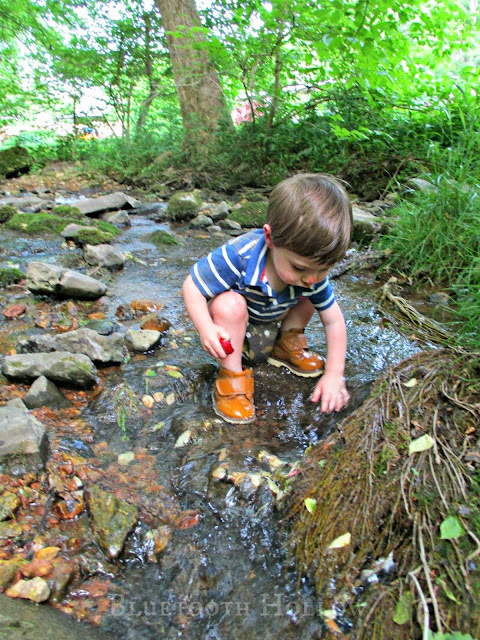 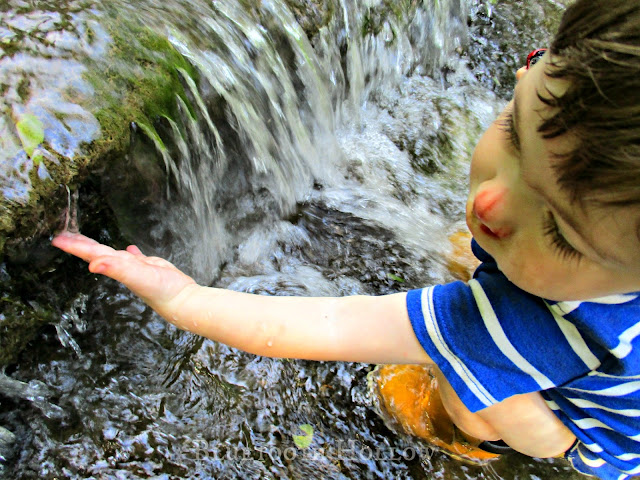 I don't know if you can see them in this quick video or not, but there were HUGE numbers of these butterflies out. 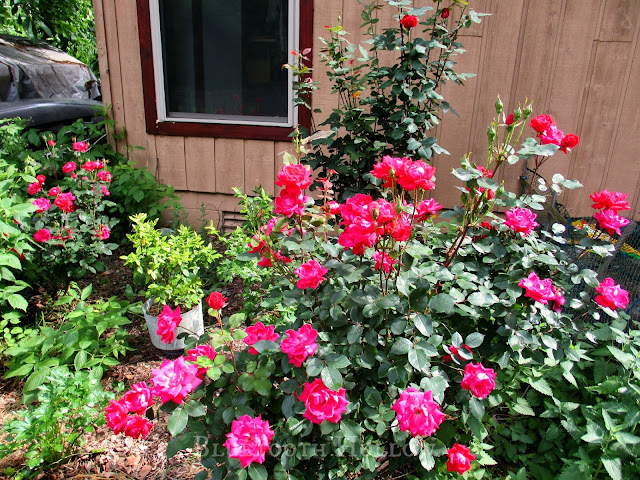 So I was able to put together a nice bouquet for my own mom... 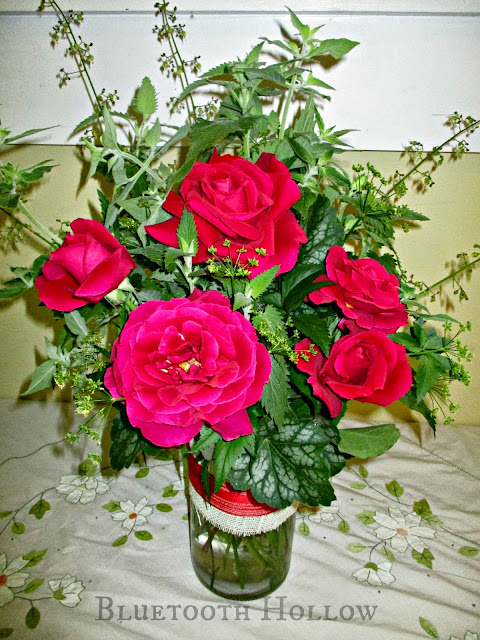 In addition to the roses I used alumroot flowers & foliage, golden alexanders, catnip and mountain mint. 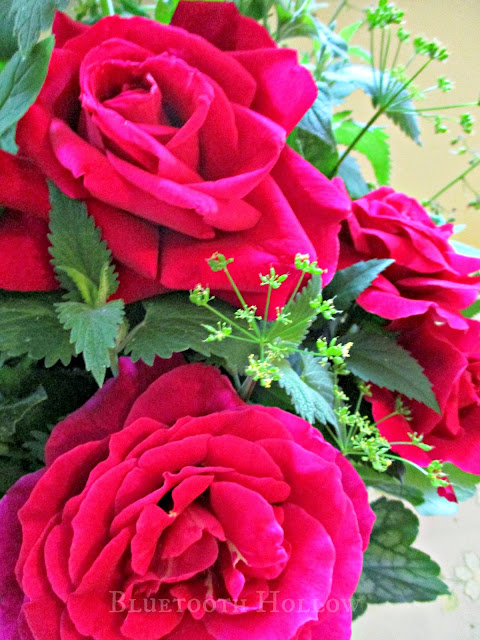 Outside time, or 'bah as Ian calls it (no idea why), is the order of the day.

He can't get enough of the outdoors, which I think is a very good thing. :)

I try to take him as many places as possible so he gets a wide range of experiences. Of course, anywhere with water makes it many times more fun for him. 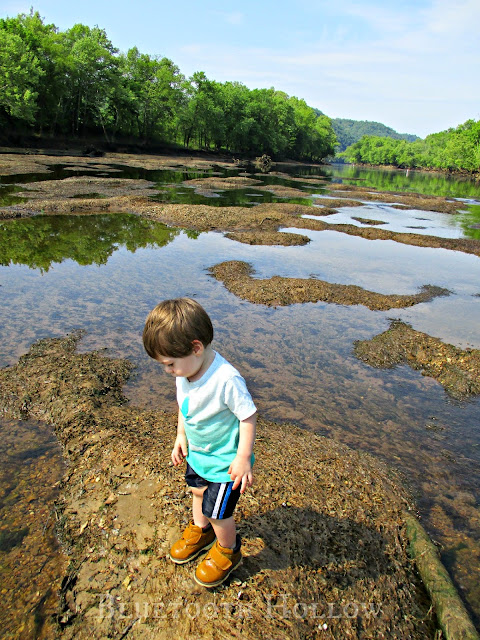 This was a short jaunt we took to the river. I was actually trying to follow up on some wading birds Mark had spotted down there, but didn't have much luck since Ian was charging through the pools, practically swimming. Oh well, it was great fun for him, so I don't really mind.

We try to take the dogs with us on our outings too, but most of the time that ends up making it that much more difficult - dogs + toddler = huge challenge. But, Ian really wanted to walk "his" dog, Mika. 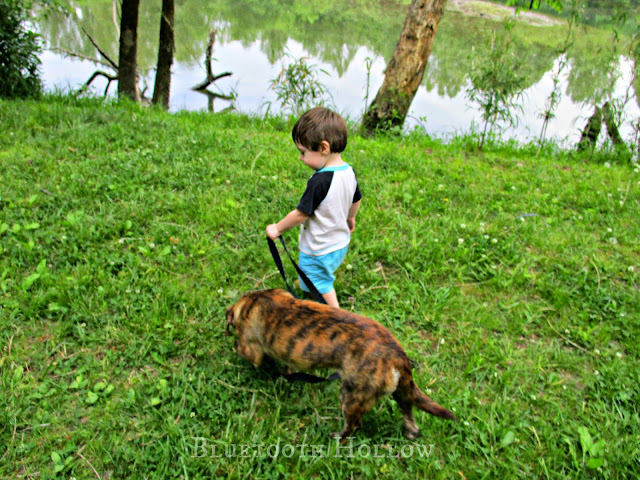 Luckily, she's pretty good on the leash. At least until she spots something in the woods. She about dragged Ian with her once or twice.

He gets plenty of dog time within the safety of the dog yard, too. 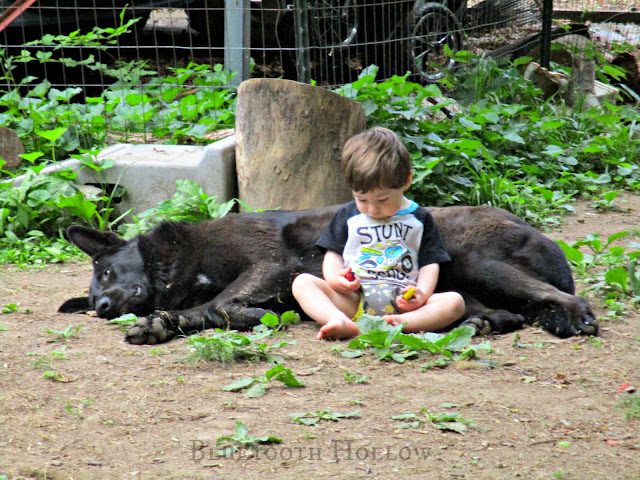 Even though Tala knocks him down all the time, simply from her massive size, she's very good with him. 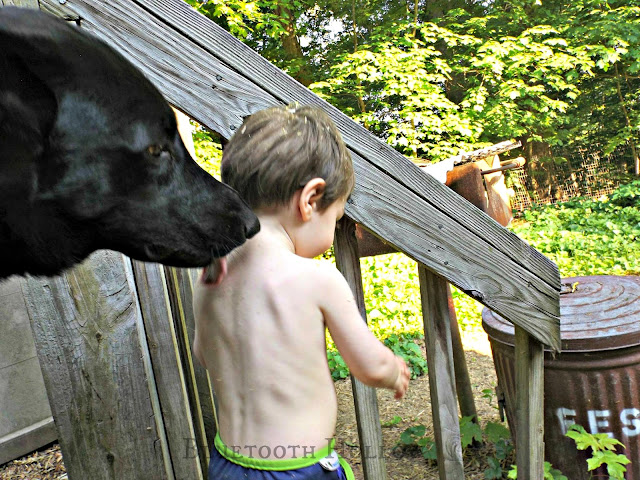 I've always known I wanted to be a stay-at-home mom, at least for my kids' first few years.

Though I admit, I do get restless sometimes. I am a self-professed work-a-holic, so photography and critters and the like help keep me occupied (other than mothering, of course).

I am so thankful that I am able to stay at home with him, so we can both enjoy the outdoors together.

We finally had a little bit of rain, and a brief break from the overbearing, unseasonal heat!

While it ain't exactly jacket weather, we have been able to stand having the windows open. Now this feels more like MAY!

Even though the cull rabbits were only supposed to reside in the grow-out pen for a few days, time constraints continue to put off their trip to freezer camp. 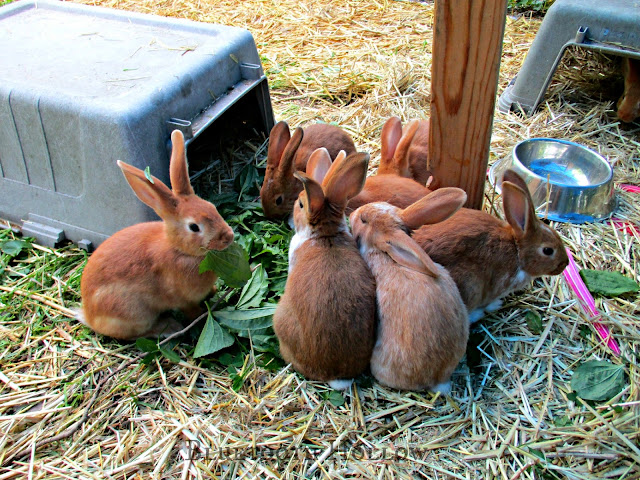 That's alright, though. They are very happy in there for the time being, and are showing no signs of digestive problems or snuffles.

With Mark's increasingly busy work schedule, it makes it really difficult to fit in time to process rabbits. It's one of those things I just cannot do on my own with a toddler. It'll just have to wait for now.

I did a poop check to make sure there were no signs of whatever the last batch of rabbits came down with, and I found this:

It appears as though the grow-out pen has received a visit from a pair of dung beetles.

Normally they will roll their poop ball away and into an underground cavity where mama beetle will lay an egg in it. I guess they gave up trying to roll it through the fence and just left it there. Somewhere I have a video I took of two dung beetles at work. Let me see if I can find it...

Mama beetle just hitches a ride while daddy does the rolling. I'm not sure if they ever made it up this steep bank, but he was giving it all he had!

One thing I find interesting is none of these kits have had eye issues, unlike all of my past NZ litters. I'm not sure if it's because it was the first time I didn't add the pine shavings to the box or something else. Either way I'll leave the shavings out from now on. They aren't really needed, anyhow.

While she still sneezes occasionally and has a crusty nose, Babs is still in good spirits, and eating well.

We can hopefully get in another good work day at the house this week. Just about all of the walls are down, so we should have it all ready for the drywall guy when he starts next month. In the meantime, we have been designing our kitchen layout and getting quotes on cabinets and counter tops.

We are all going to make the most of this cool weather while it lasts, and I am going to continue to try and enjoy my one-on-one days with this crazy kid: 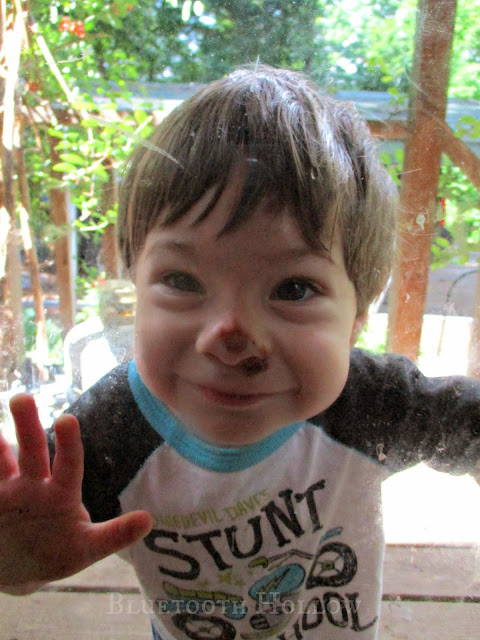 Shared on: The Homestead Blog Hop