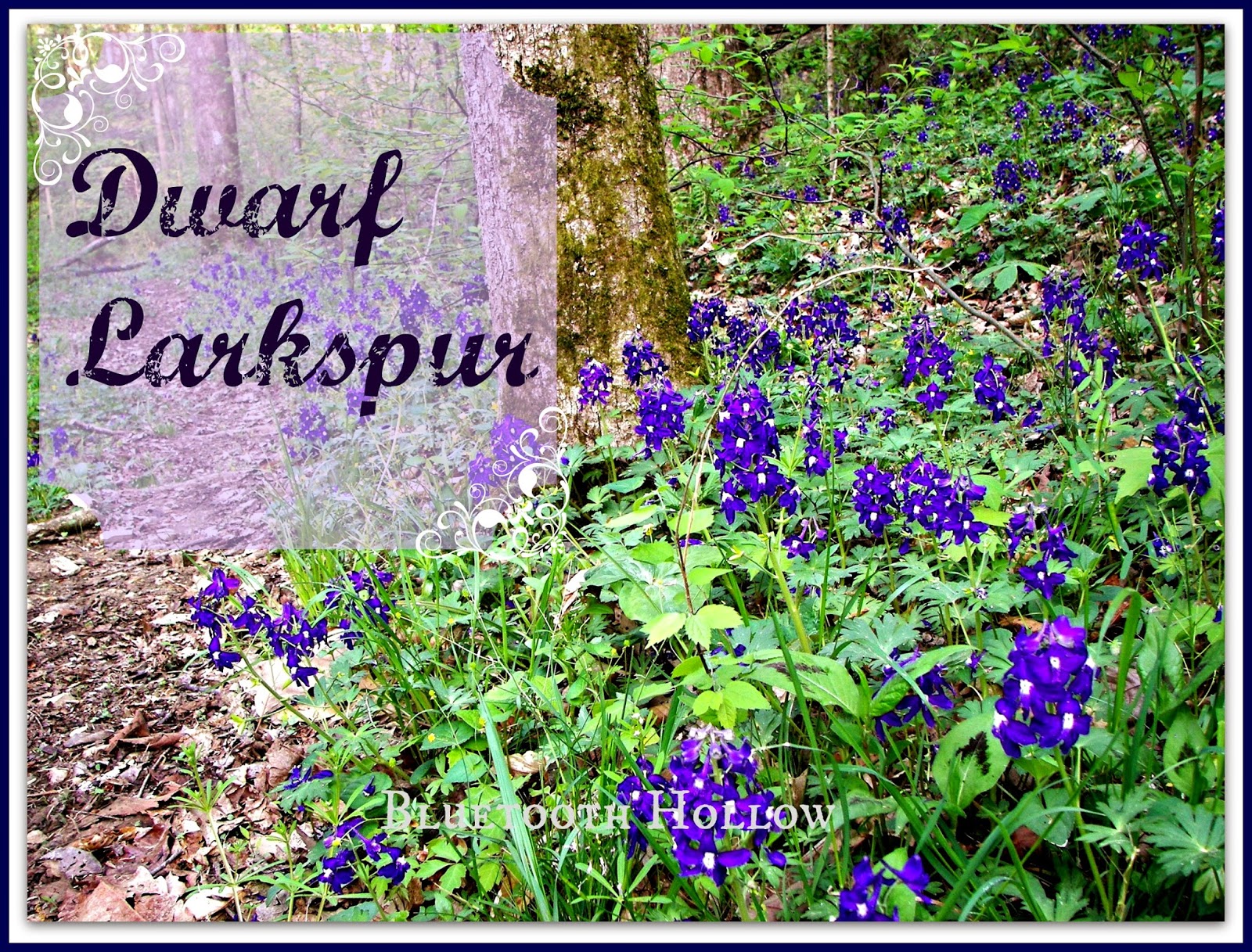 While there are some wildflowers that require a sharp eye and good observation skills if you wish to view them, there are others that nobody could miss.

When these plants bloom, there is no mistaking that indigo-purple swath stretching across the forest floor. The hue stands out like little beacons against the bright new greens and dusty browns. 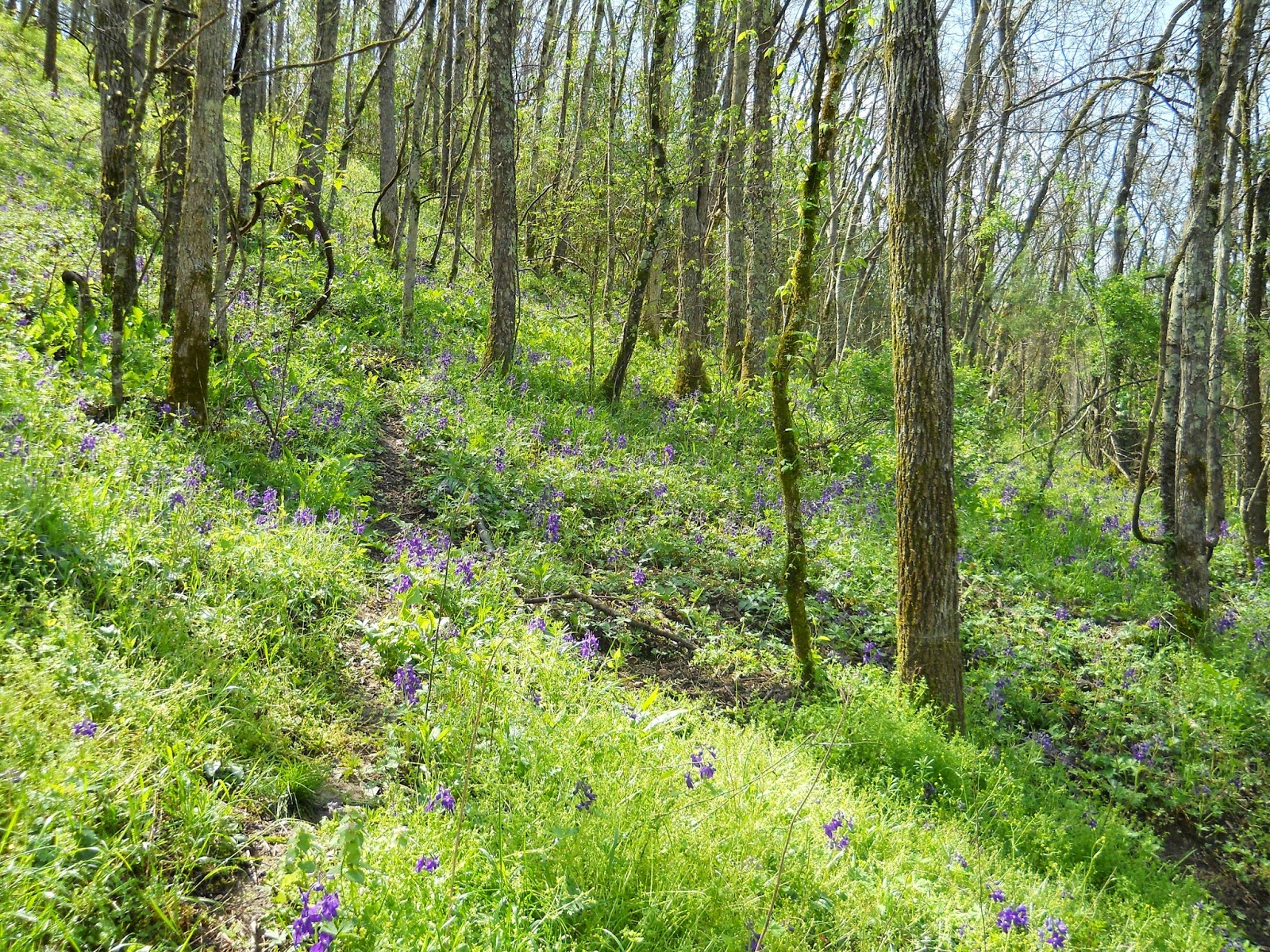 Early spring sunshine from late March to early April coaxes these handsome flowers out of hiding.

Damp to dry to rocky, they aren't too particular about their woodland homes, as long as the soil is calcareous. This makes them much easier to find if you live in the eastern half of the country.

They are unmistakable in their appearance.

The blooms reach no more than two feet high, and are usually a deep indigo blue with a white center. 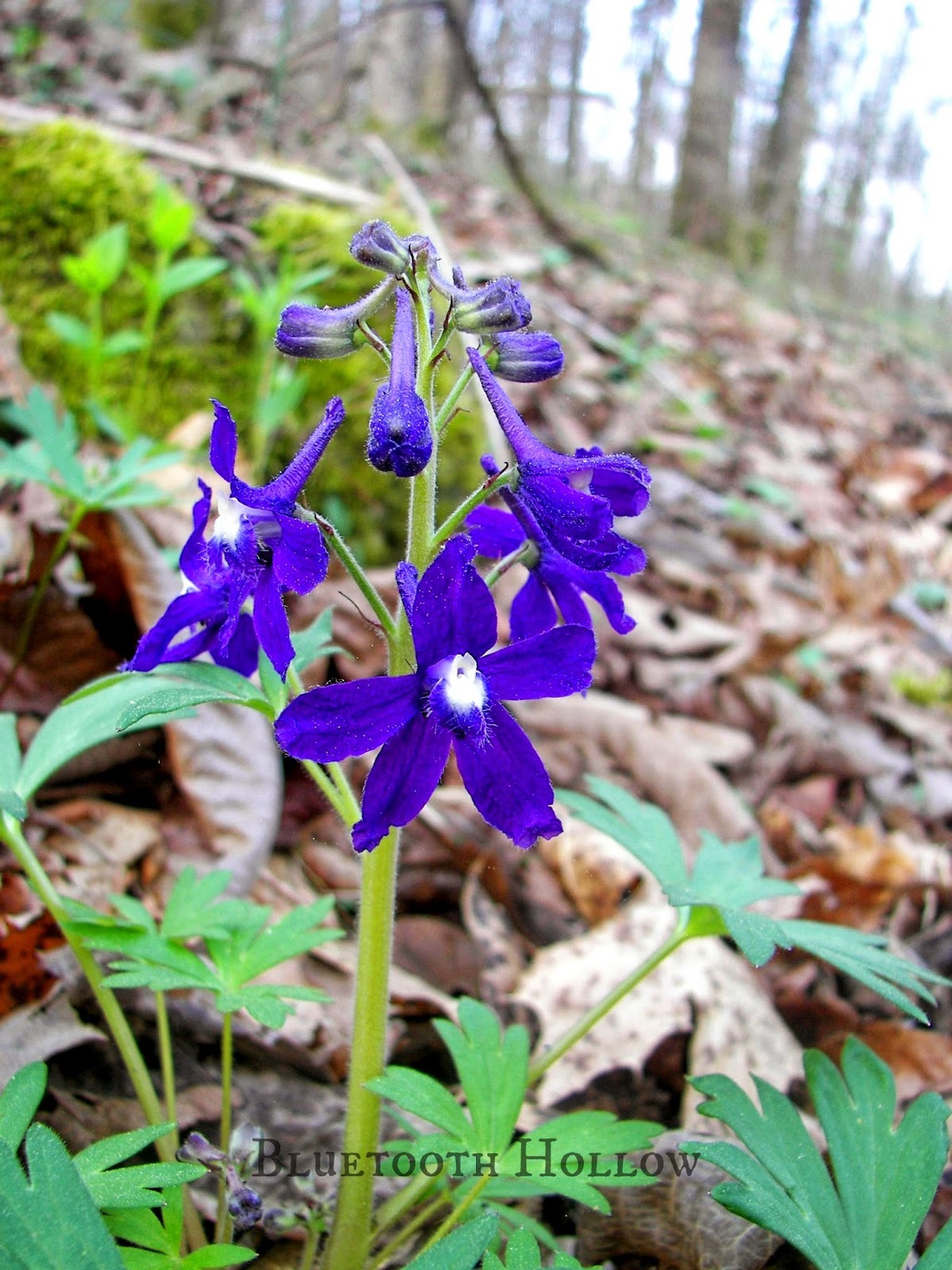 Individual flowers have five petals with a distinctive spur rising from the back (hence the name "lark spur".

Occasionally you will find blooms that are pink, white or bi-colored.

The palmate leaves are mostly basal (growing from the plant's base).

They are members of the expansive plant family Ranunculaceae, which contains buttercups, poppies and bleeding hearts (like our previous Wednesday's flower).

Dwarf Larkspur's Latin name is as descriptive as its common name: Delphinium tricorne.

Delphinium is from the Latin word "delphi" which means dolphin.

Take a closer look at the unopened flower buds and you can see how they somewhat resemble dolphins. 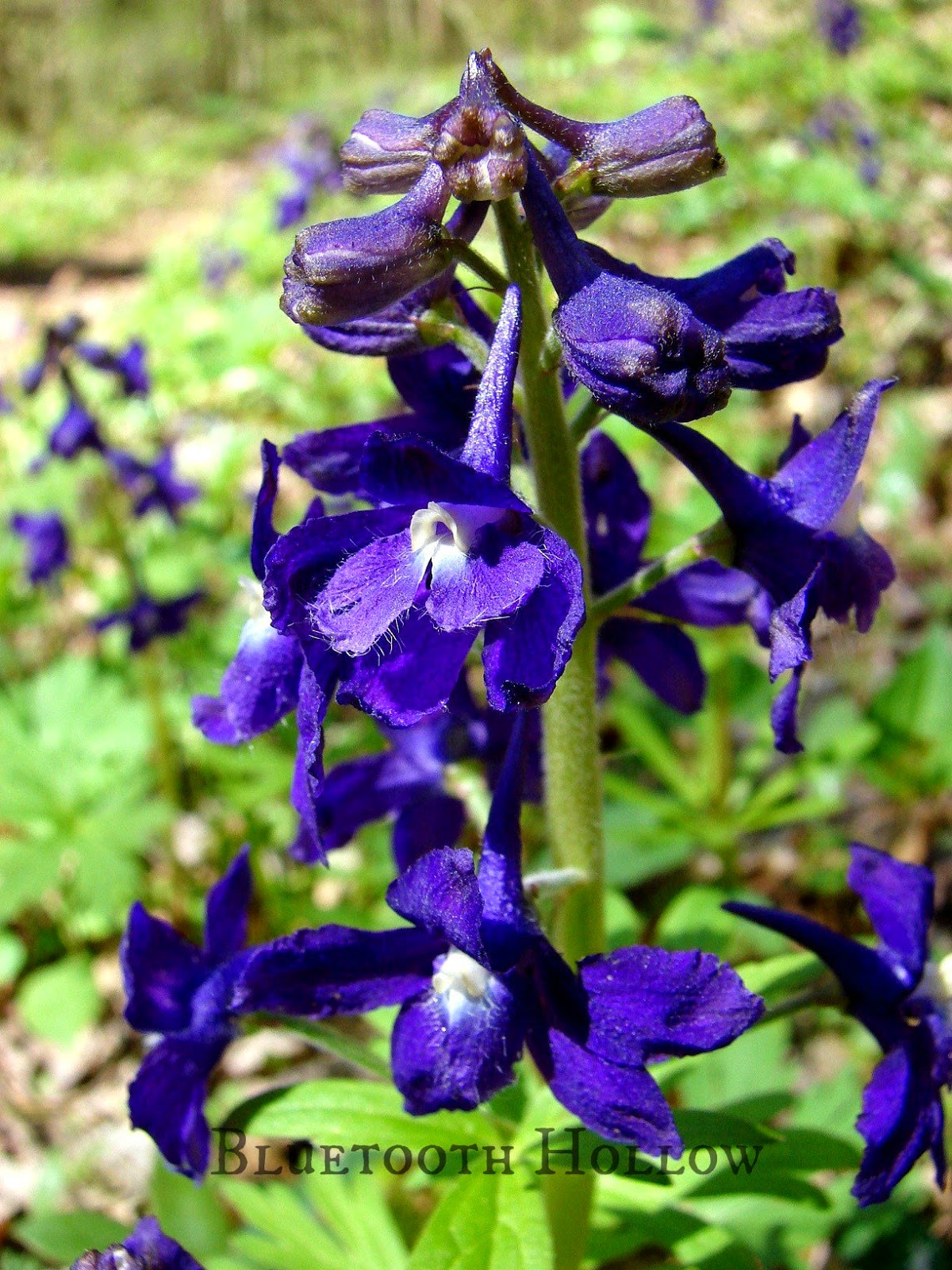 It takes a little imagination.

The tricorne part of their Latin name means "three-horned," in reference to the shape of its seed pods.

If you were to take a bloom and rub it across your palm, it would stain your skin blue.

The Hopi Indians would extract a dye from Southwestern Delphinium species, and the settlers learned to do the same. 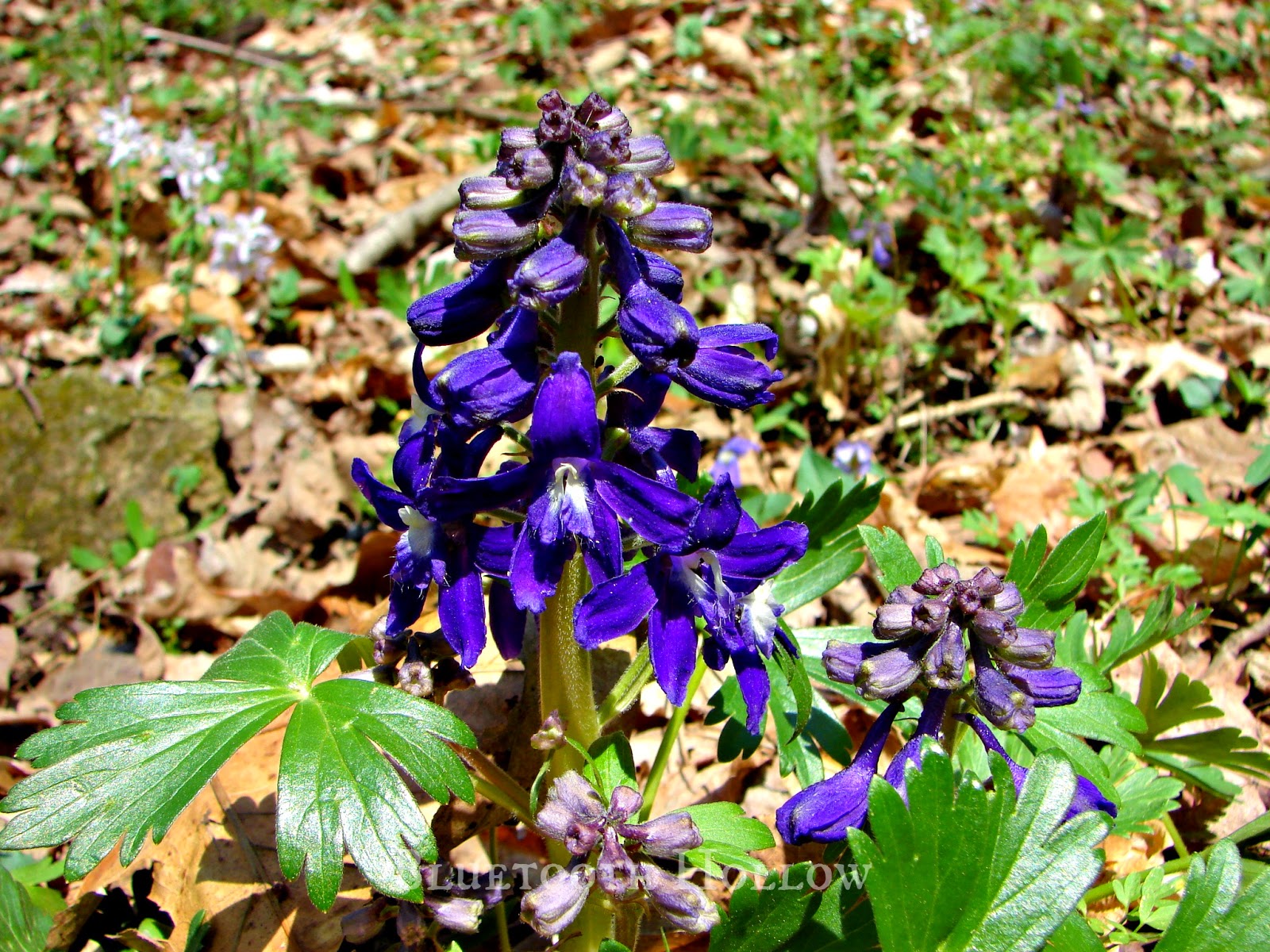 Dwarf Larkspur has had only a handful of medicinal uses throughout history, as it is very toxic.

The Cherokee would taken an infusion as a medicine to treat the heart. A little too much of the same however, and it could stop it from beating.

Other references state that the root given to cattle would lead to drunkenness and death.

European Larkspur species have been used to kill parasites in humans for hundreds of years, including the treatment of head lice for soldiers during times of war.

It contains numerous substances, some not yet identified by science, that are highly toxic, so you must never attempt to consume it.

Pollinators still appreciate its nectar, however.

The flower's tube is rather long, so only long-tongued pollinators like butterflies, bumblebees and moths can reach the nectar. 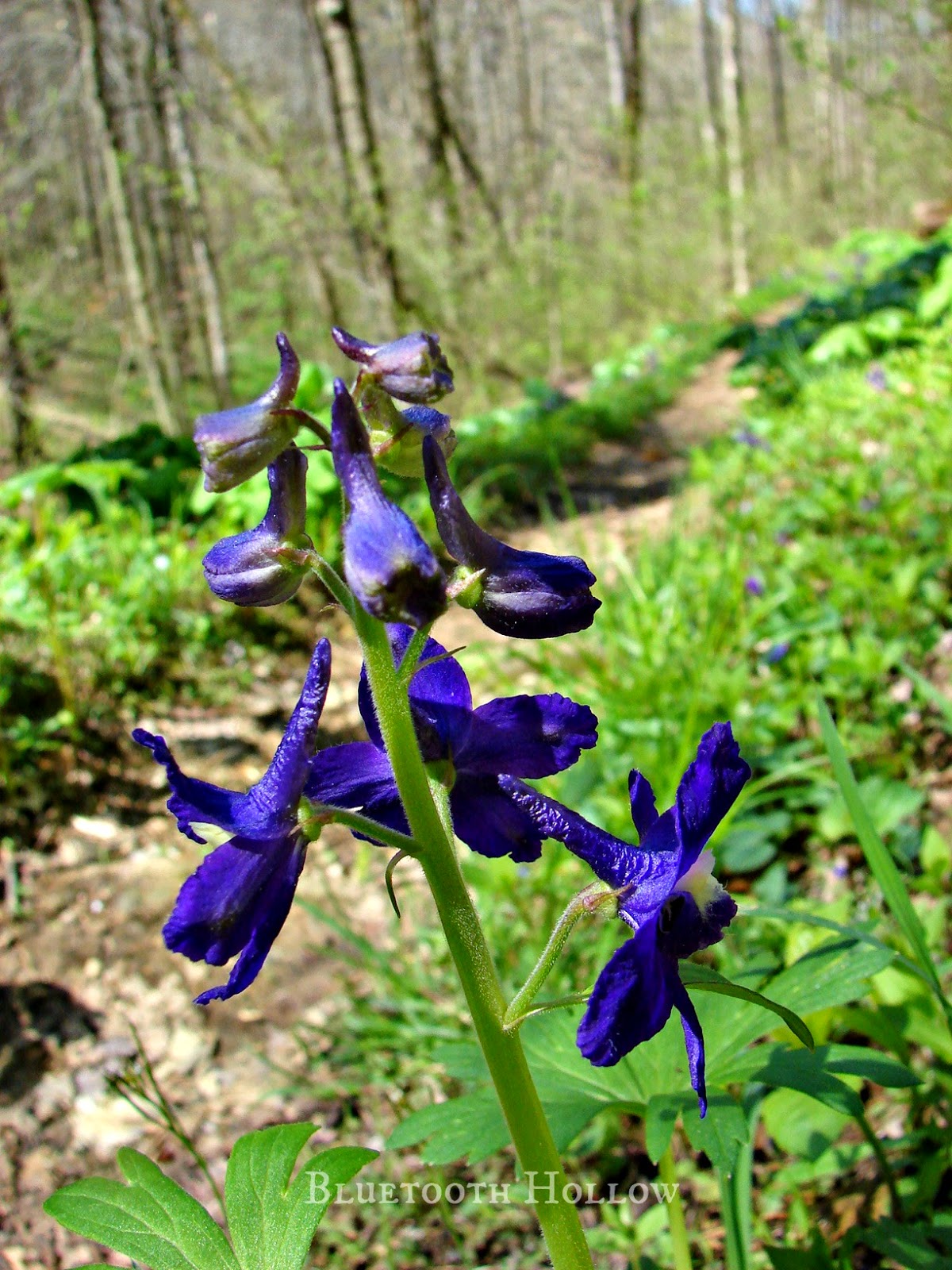 Their flashy blooms remain aloft for a couple of weeks before giving way to the taller foliage of summer.

They are a highlight of the spring bloom in our eastern forests! 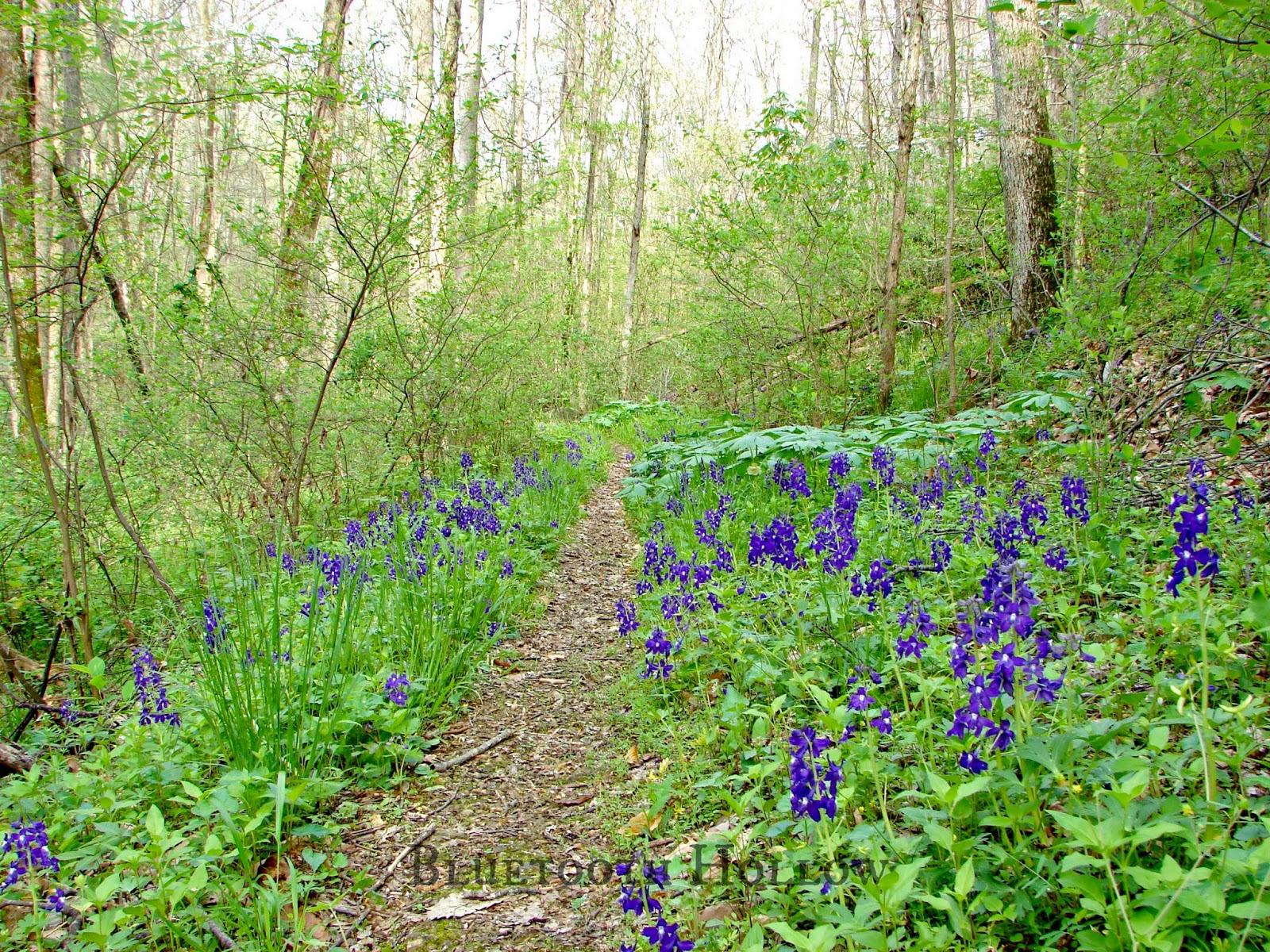 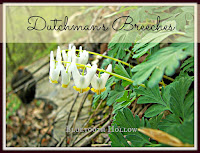 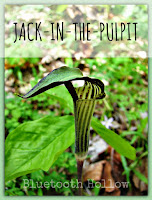 Wildflowers of Tennesee - Jack B. Carman