I haven't been bringing the nest boxes in and handling all the babies every day for the simple, lame reason that I don't want to get out in the cold more than I have to.

Which is kind of funny, considering temperatures like this felt warm a few weeks ago.

Both Ian and I are battling a head cold, like everyone else on the planet seems to be right now. These up and down temperatures really do a number on the immune system.

I've at least been peeking at them every day to make sure everyone is getting fed.

Today I finally brought everybody in to replace the nest box bedding and get some pictures... 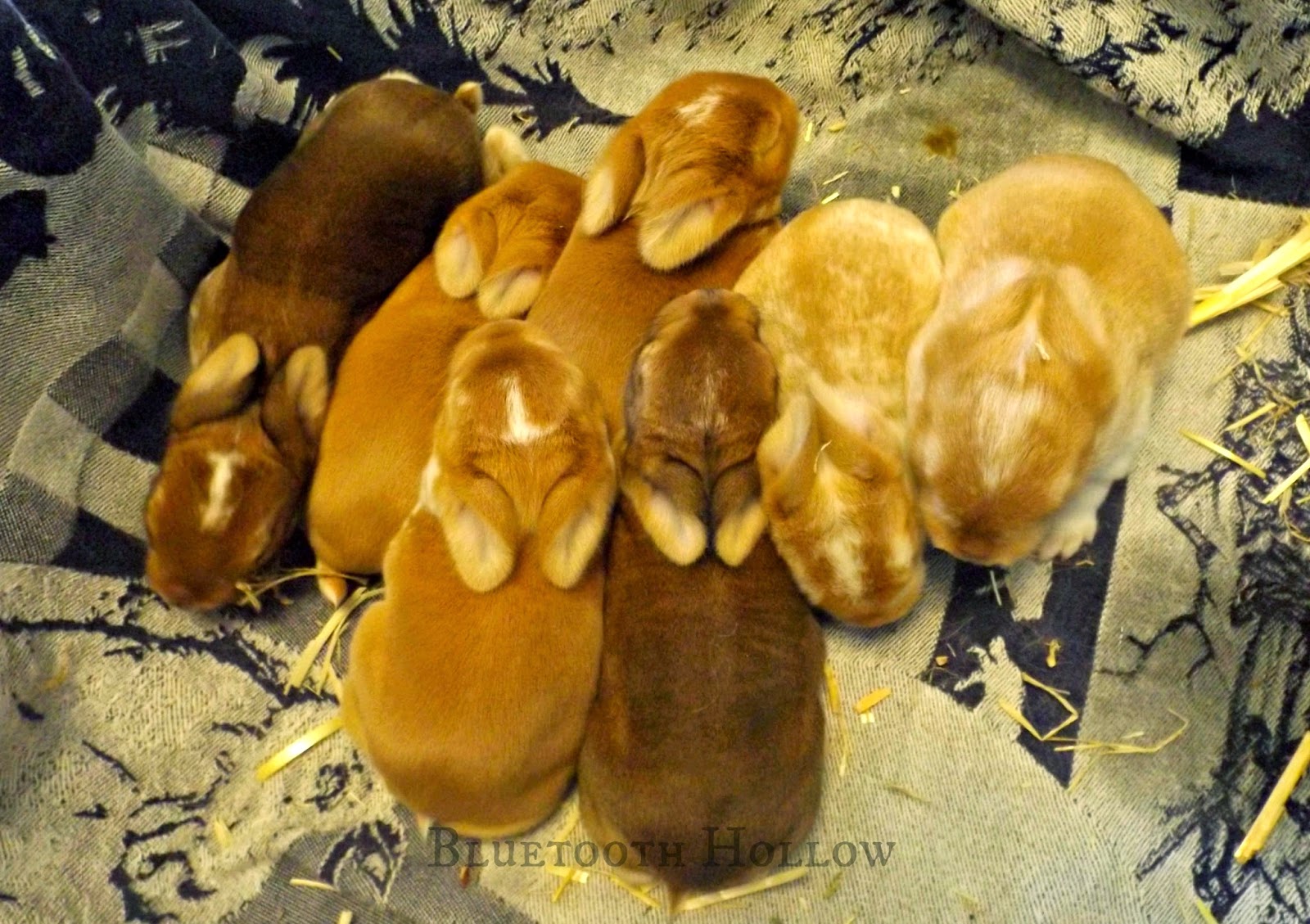 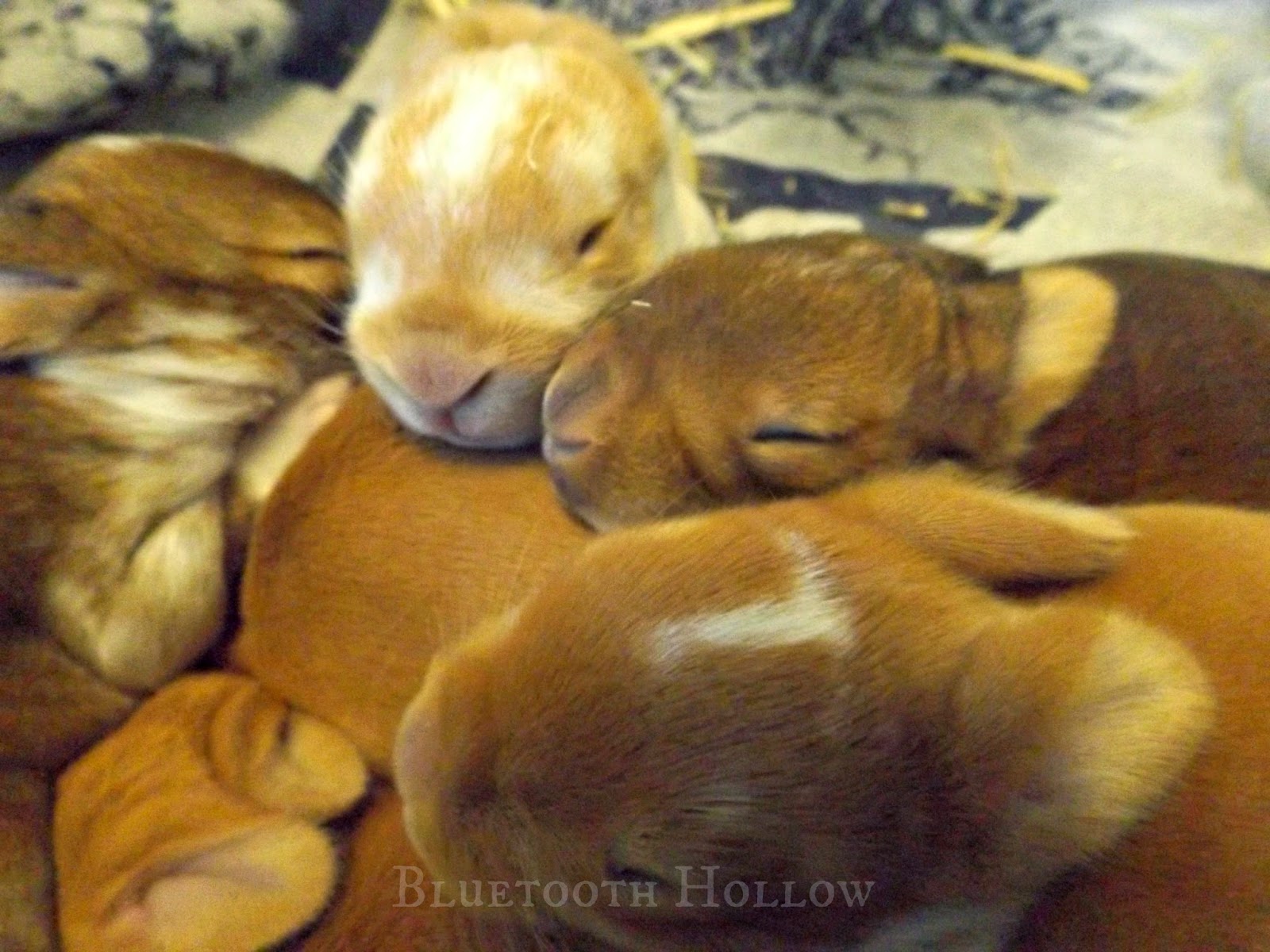 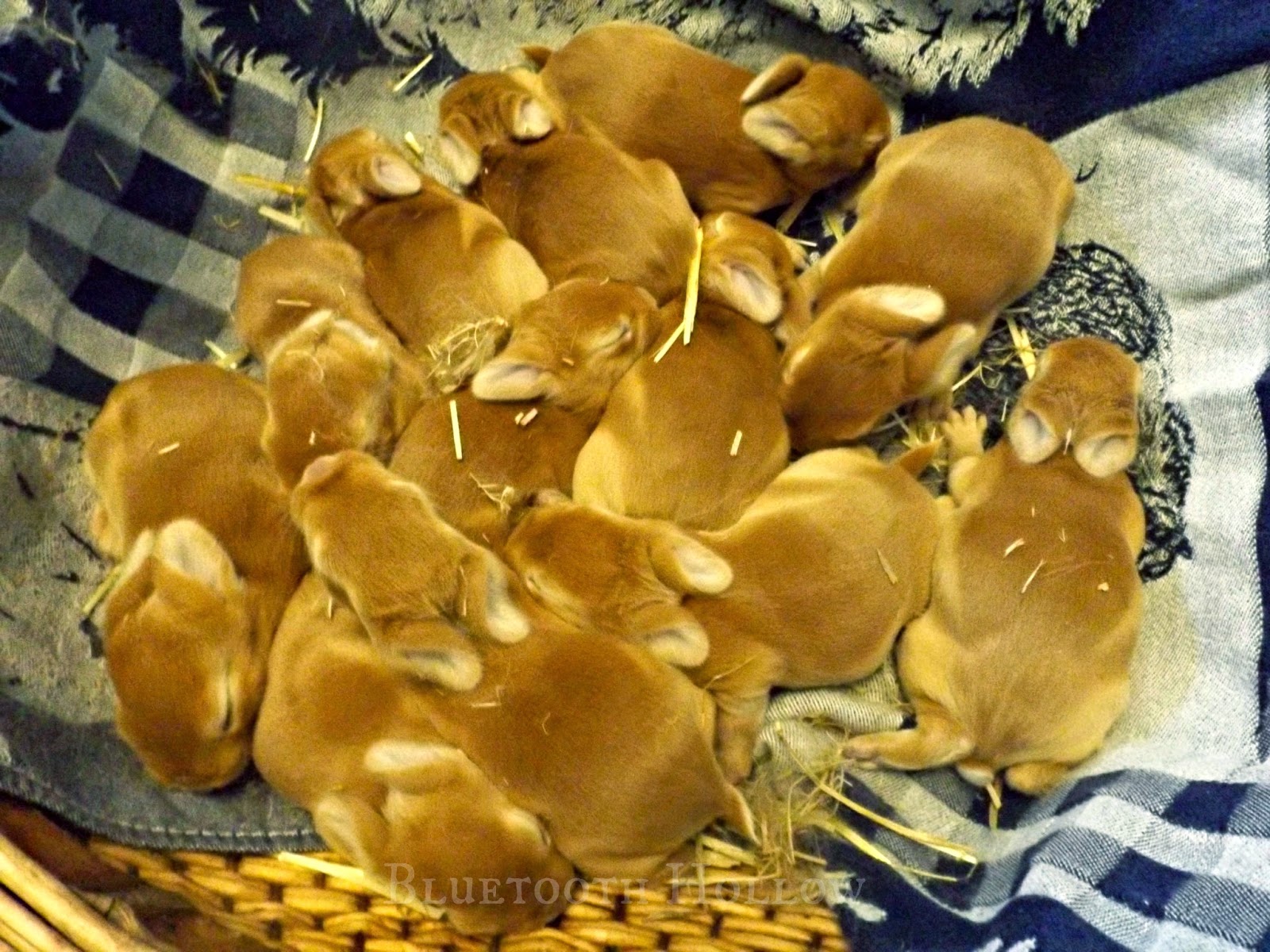 I'm guessing ole' "funk eye" didn't survive, since I only counted 12 alive. Today when I cleaned out the nest box I found one desiccated kit, which I'm assuming was him. It's just as well. The remaining 12 are fat and sassy! 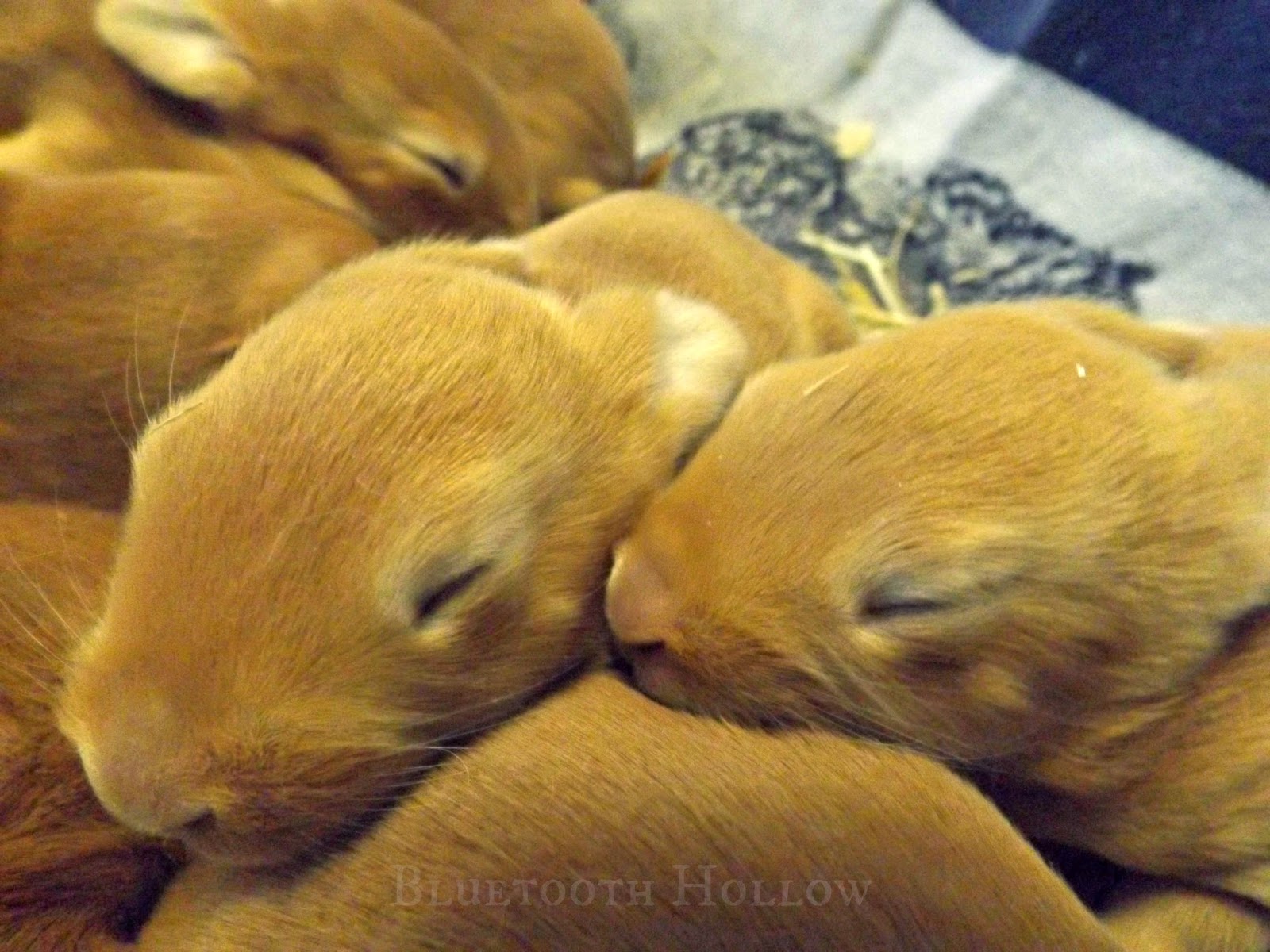 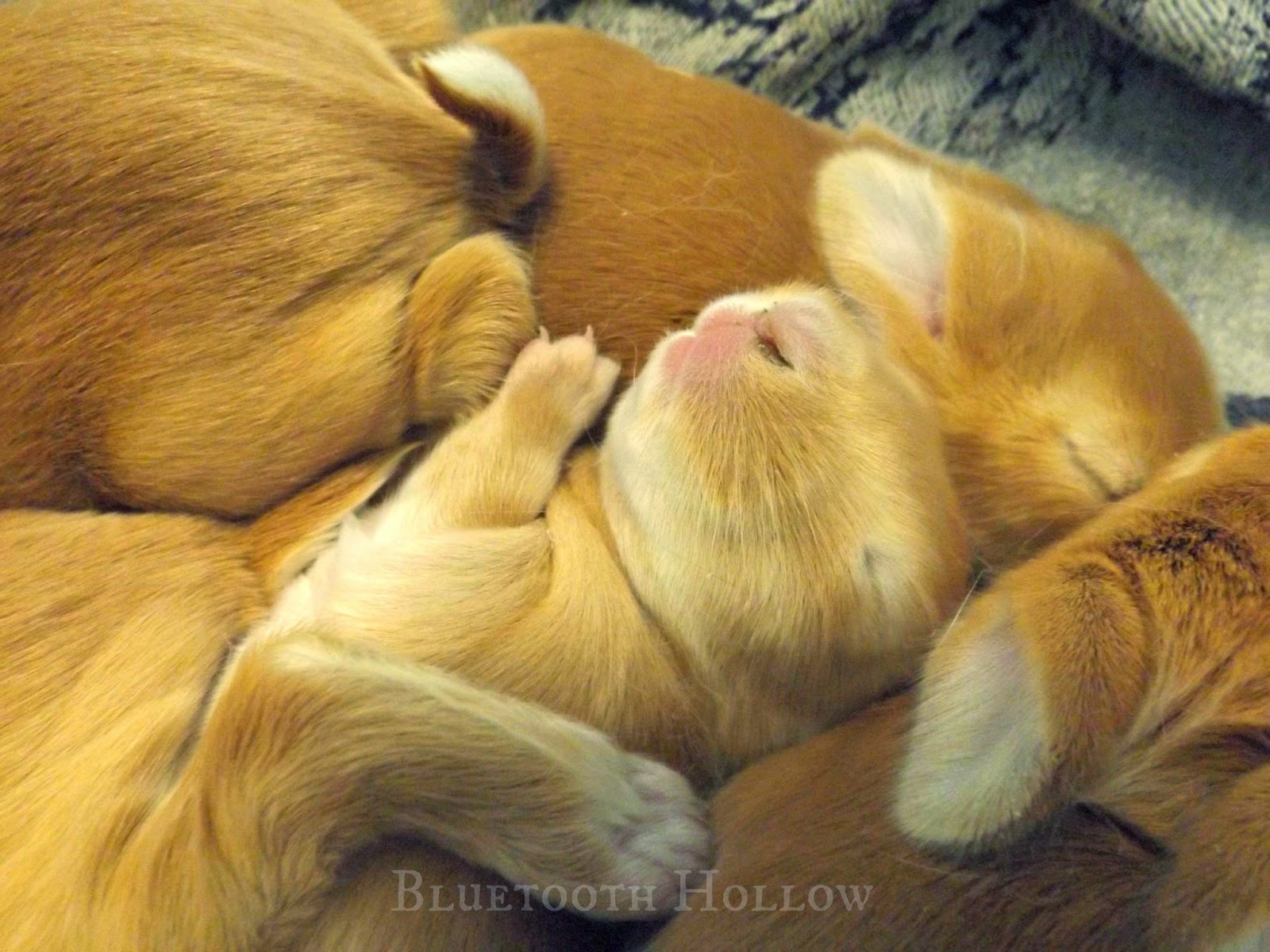 In the end, Babette's litter was just too unthrifty to survive. I thought they looked a little scrawny from the get-go, with bluish colored extremities. She spent a lot of time lounging in the nest box, but they never looked fed or seemed to grow any. I tried swapping them around the other doe's nest boxes, but they just couldn't seem to catch up.

I decided to go ahead and re-breed her, rather than wait 3 weeks and breed everyone at once. I realize it's a bit risky if she ends up botching another litter, but the hot season is fast approaching and I really need a second Creme doe for my breeding project. She really wanted to be bred anyhow, since she would flatten and lift every time I touched her. So hopefully the second time she'll get it all right. She really didn't even screw up as much as Cardamom did her first time, and she turned out to be a fantastic mother.

I cleaned out the grow-out pen the other day... 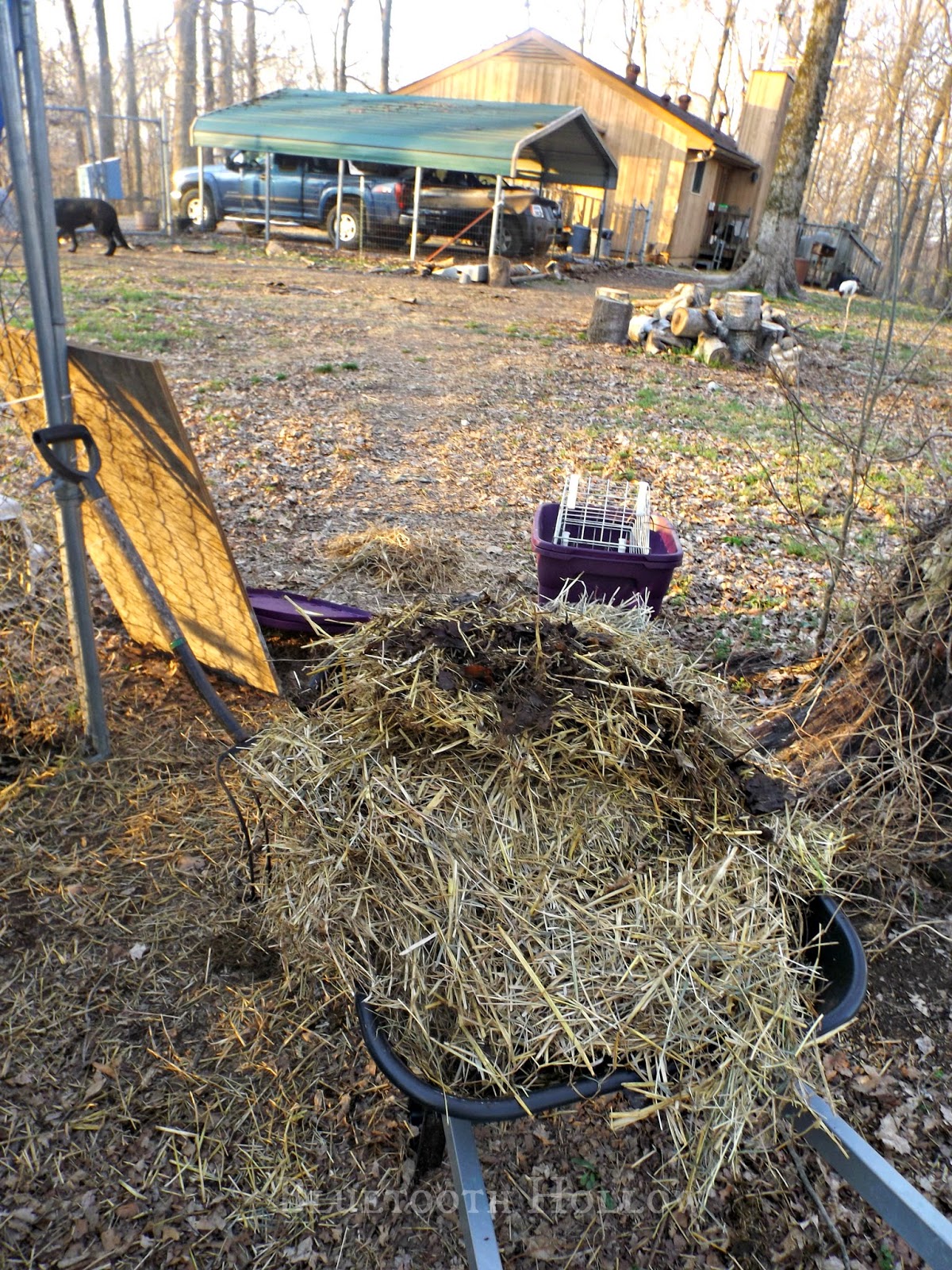 I removed all of the straw down to the soil and carted it away.

There's some really great soil under there, chock full of earthworms.

So now I'll just disinfect all of the feeders and boxes, and spray everything else down with a bleach solution.

We'll try to get a couple of more cages up and I'll only put a few of the grow-outs in the pen this time, just in case.

By the way, we are borrowing an old laptop from my parents, so we at least have a way to get online at home. We're going to see about getting mine fixed, which will hopefully be soon since I need it to teach a class on herps in a couple of weeks.

Despite colder temperatures, spring is still in full swing!

Shared on The HomeAcre Hop