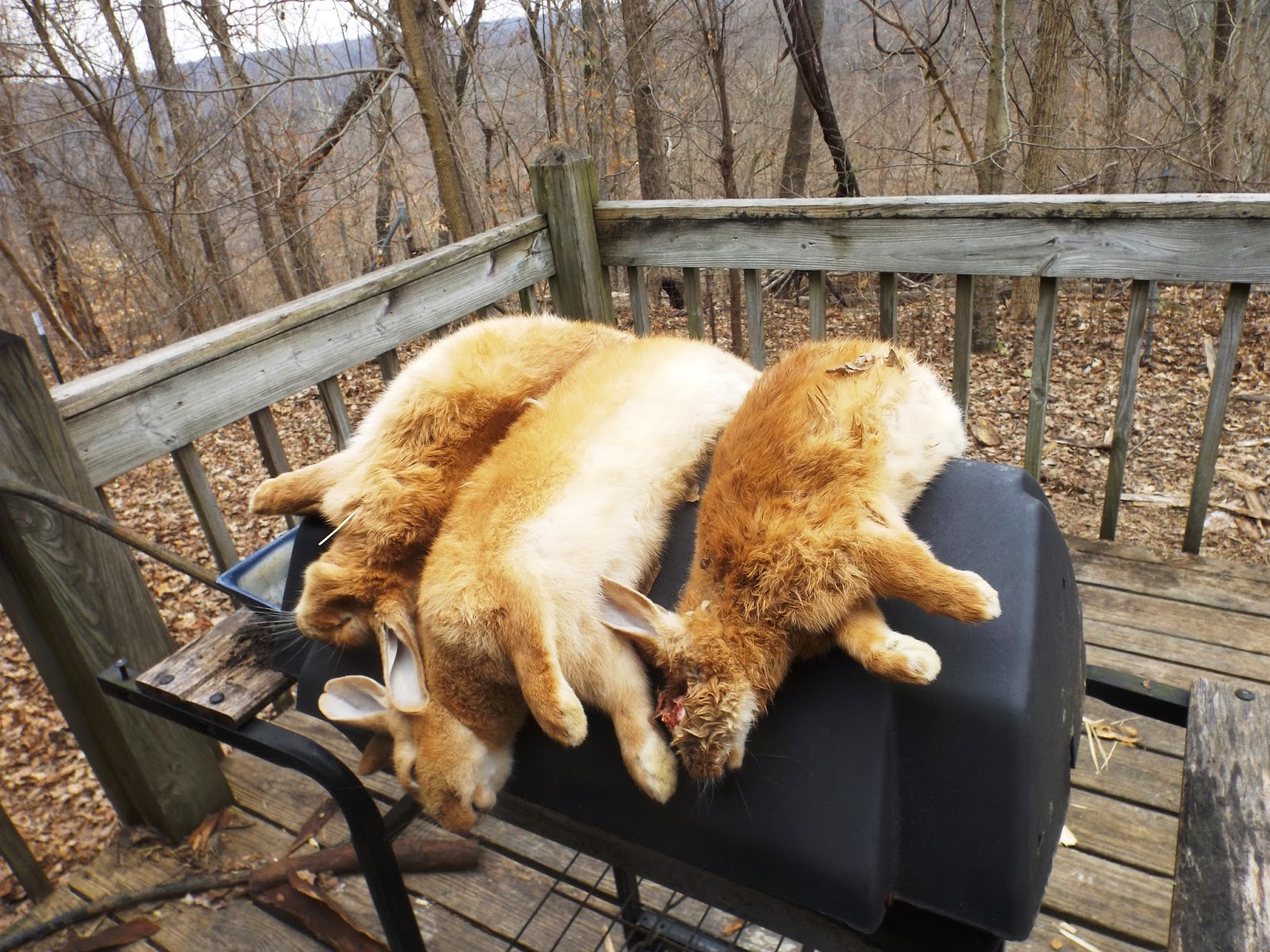 I knew something was amiss this morning when I stepped out back and saw Mika casually lounging - IN THE GROW OUT PEN.

It seems "somebody" had gotten in overnight, and helped themselves to a very generous rabbit dinner.

I discovered two remaining rabbits, hiding in a box. Even though her belly was bulging, I knew there was no way she could have eaten five rabbits.

I soon found three more scattered across the yard, with only their heads chewed.

We "reminded" all three dogs whose rabbits they were, just in case, but I really don't think the others participated. I know for a fact that the shepherd and the terrier would have consumed any and everything that they killed (just from past experience).

While it was a future plan to incorporate rabbits into our dogs' diets, this isn't exactly what I had in mind.

I thought I would at least try and see if the meat could be salvaged, although I had my serious doubts. All three were very badly chewed, and the intestines had already begun to break down inside. That became apparent when I pulled the skins down and the entire belly came open with it. Think "The Walking Dead," if you're into that show, only with smell-o-vision. It was................unpleasant.

Up until this point I was assuming Mika had eaten two whole rabbits. However, in the middle of processing I happened to look over at the back corner of the fence and see a very frightened little bunny sitting there, perfectly motionless. We managed to catch him and return him to the pen.

That, in my mind, confirmed Tala and Dioji's innocence, because I cannot imagine that rabbit escaping their attention as it ran across the entire yard.

At the end of the day, the meat wasn't any good for us, so the chewed up rabbits went to the rest of the dogs.

The question of whether or not to use the young doe for replacement stock has been decided for me, as she was among the unfortunate victims.

I was kicking myself this morning, because I just knew I had closed and latched the gate, yesterday evening. But then I discovered that the latched gate can be pulled open fairly easily, since it doesn't line up properly. So the gate got an extra latch, and I got a little skinning practice.

It's hard not to get too emotional when this sort of thing happens, but we have to consider that we ask a lot of our canine companions.

We cannot be shocked and disgusted when a predator with such a deeply ingrained instinct to kill and eat prey, decides to act on that instinct. It's quite natural, actually.

What is unnatural is to require them to suppress those instincts. That isn't to say we shouldn't, however.

Something else that is ingrained in a canine's psyche is pack mentality. As pack leader, you decide when and what to eat and who gets to eat it. You are in charge of the pack; and if you decide that a rabbit or a chicken or a lizard are to become a part of that pack, then nobody can touch it.

We'll keep working with her, but it's possible she may not fit well into a farm environment. She is such a sweet girl, and an all around great dog, so I would hate to give her up. But if it came to that, we shouldn't have any trouble finding her a good home.


The three remaining rabbits are pretty traumatized, but appear uninjured.

Next week it'll be their turn, and a few weeks later the next batch of bunnies will be ready for the pen.

And so continues the cycle of life... 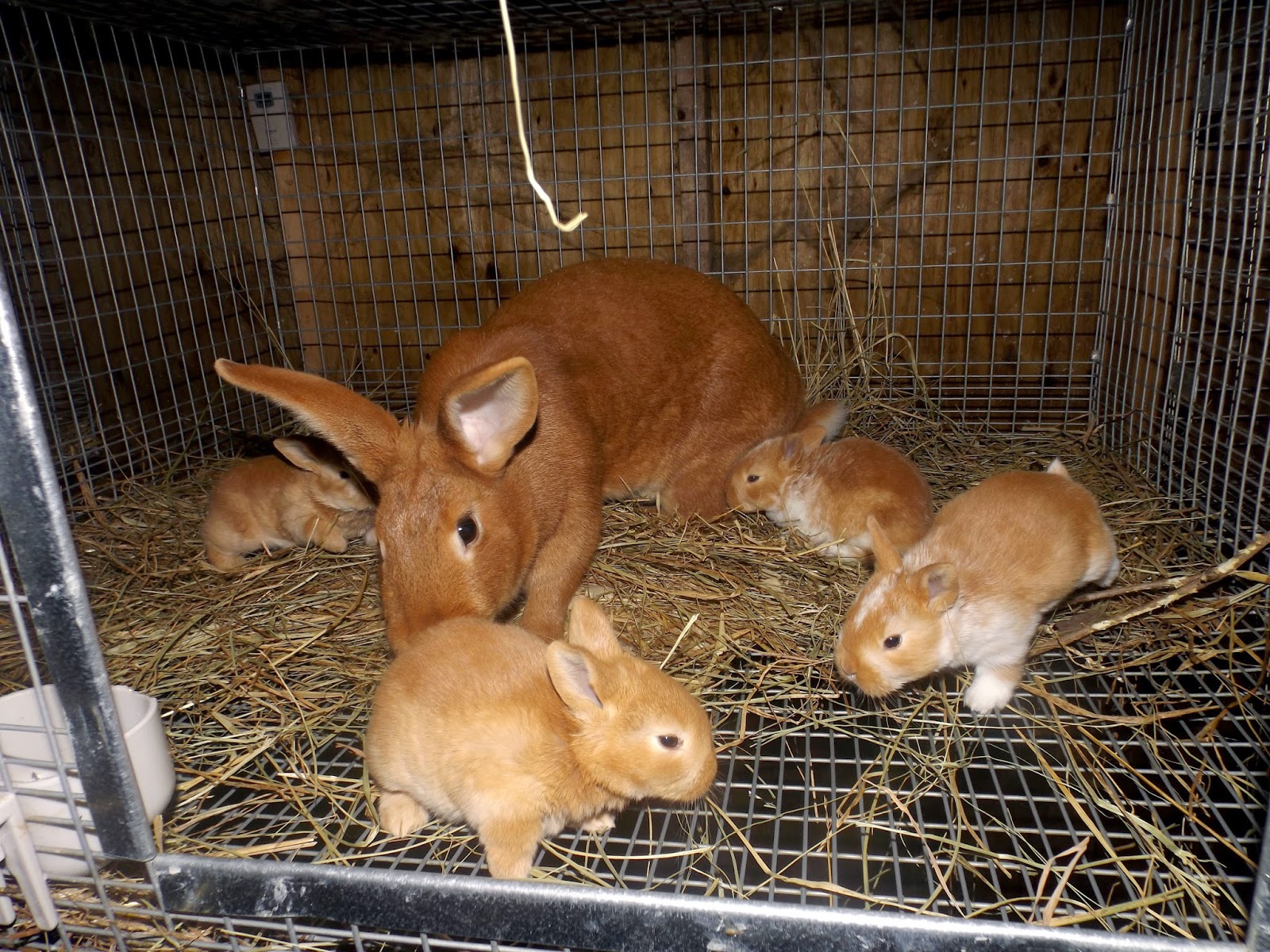