To Catch a Killer


All of us homesteaders run into predator problems, from time to time.

Losing animals is just an expected part of keeping them, especially if they are allowed to free range.

Last fall, we moved our young flock of Silver Appleyard ducks to my parents' farm, after raising them at our home on the park.

We really don't have the right set up here for ducks, and knew they would be much happier with a creek to swim in and lots of room to roam and forage. 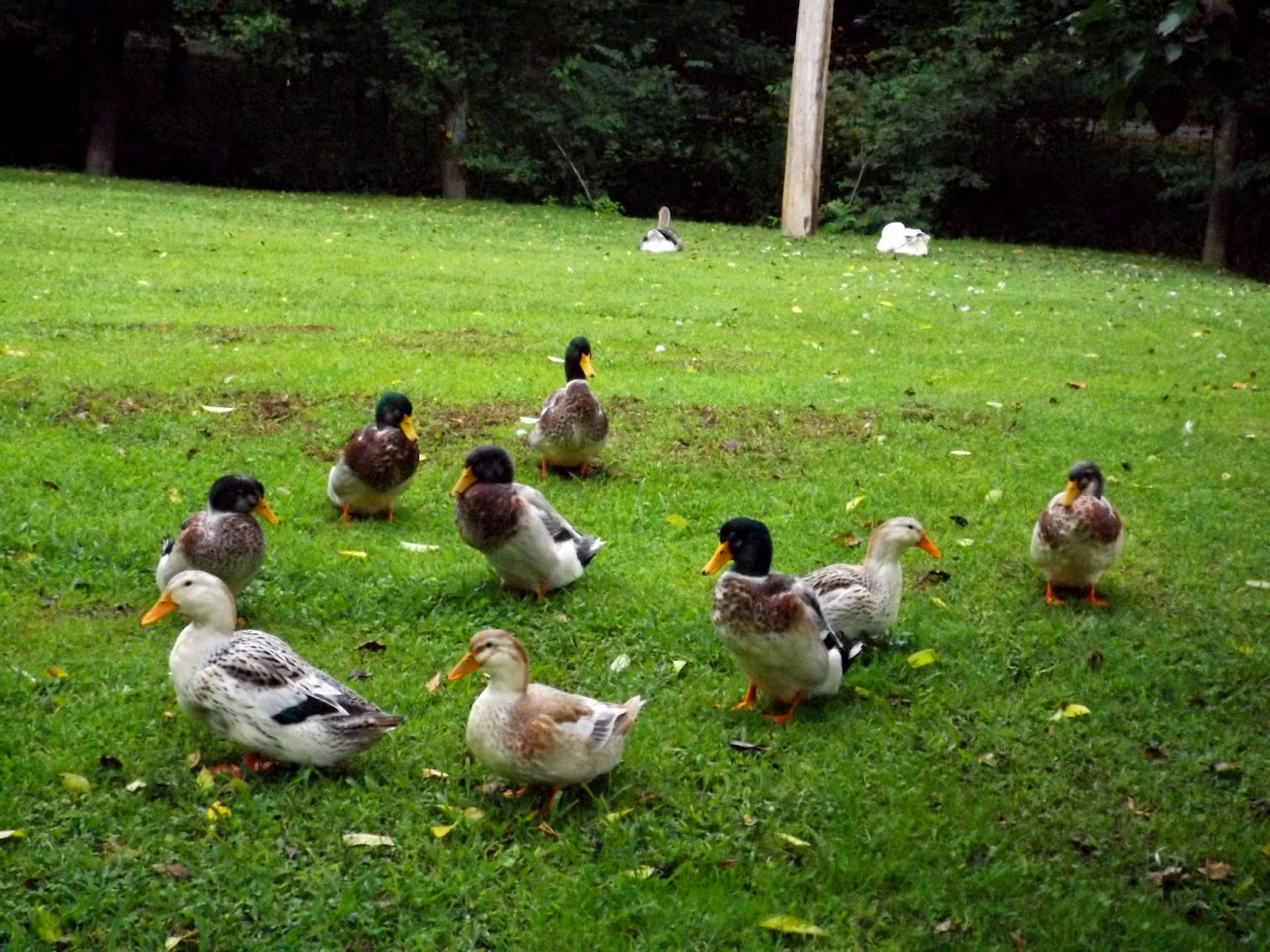 My plans were to keep and breed the best of the flock, eating the extra drakes. We still have 2-3 left to butcher, as we only ended up with 4 females out of a straight run of 13.

Unfortunately, the ducks have not been very cooperative for my parents about going into their pen at night. Ducks are very vulnerable to predation, since they tend to sleep on the ground and do not see well in the dark. (Thus, a"sitting duck" is aptly named.)

So, the inevitable finally did happen... 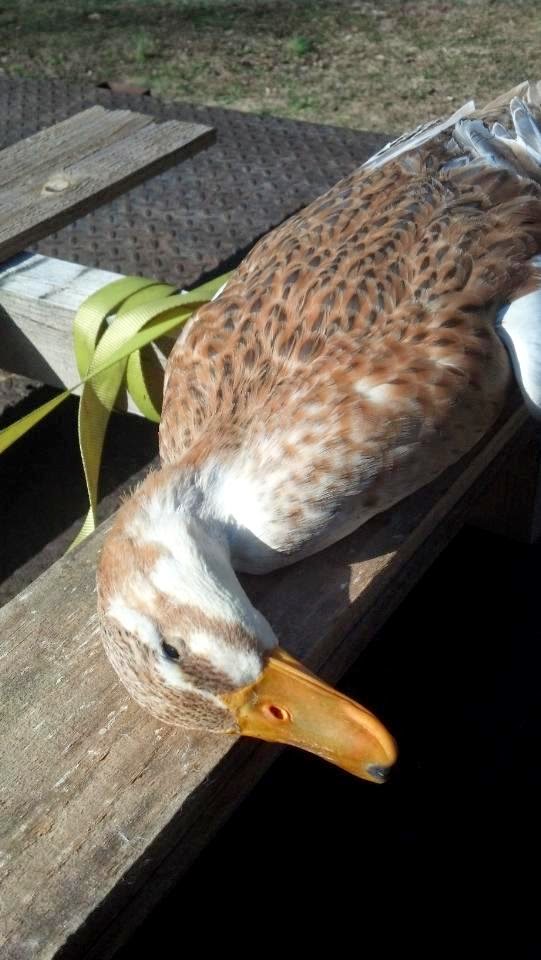 I was a little relieved when my mom sent me this picture, because it wasn't one of my future breeders.

But it was a hen, unfortunately, so that means one less egg they'll be getting every day.

Now, this was my original suspect: 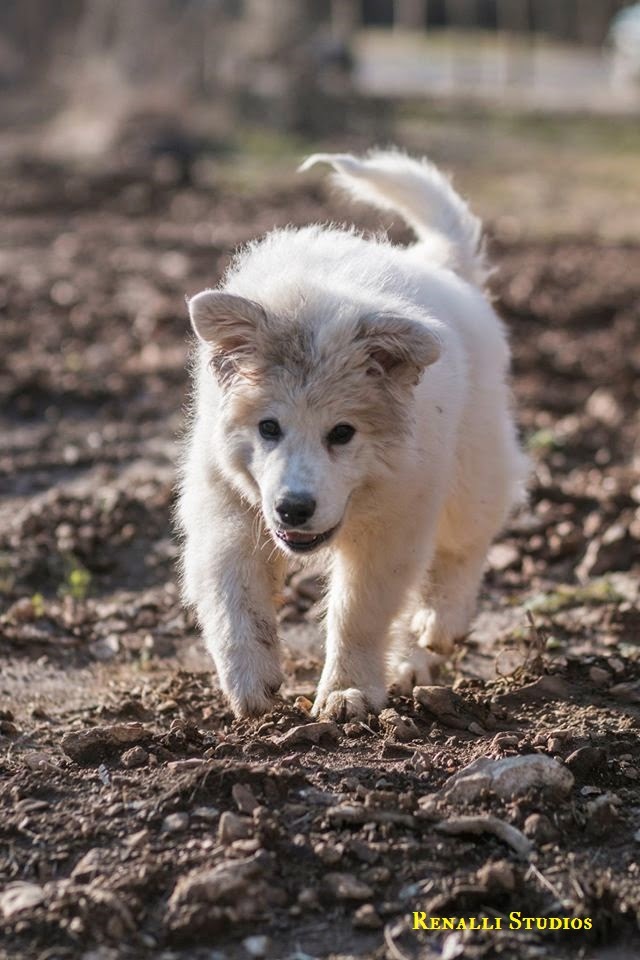 This is Fen, the newest member on the farm. He's a Pyrenees/Komondor cross, and is still learning to play nicely with the birds.

He's been caught red-handed being too playful with the ducks, and chasing guinea fowl.

Then the old Pilgrim gander was found badly injured a few mornings ago, with a bloody wound on his throat. We first suspected the puppy, as he tends to bounce around the geese playfully. Although he really does keep his distance, since he's been goosed on more than one occasion.

Sadly the gander passed away from his injury shortly thereafter, leaving a very bereft lady goose behind.

When I finally made it over to inspect him, I saw at least two sets of bite marks: 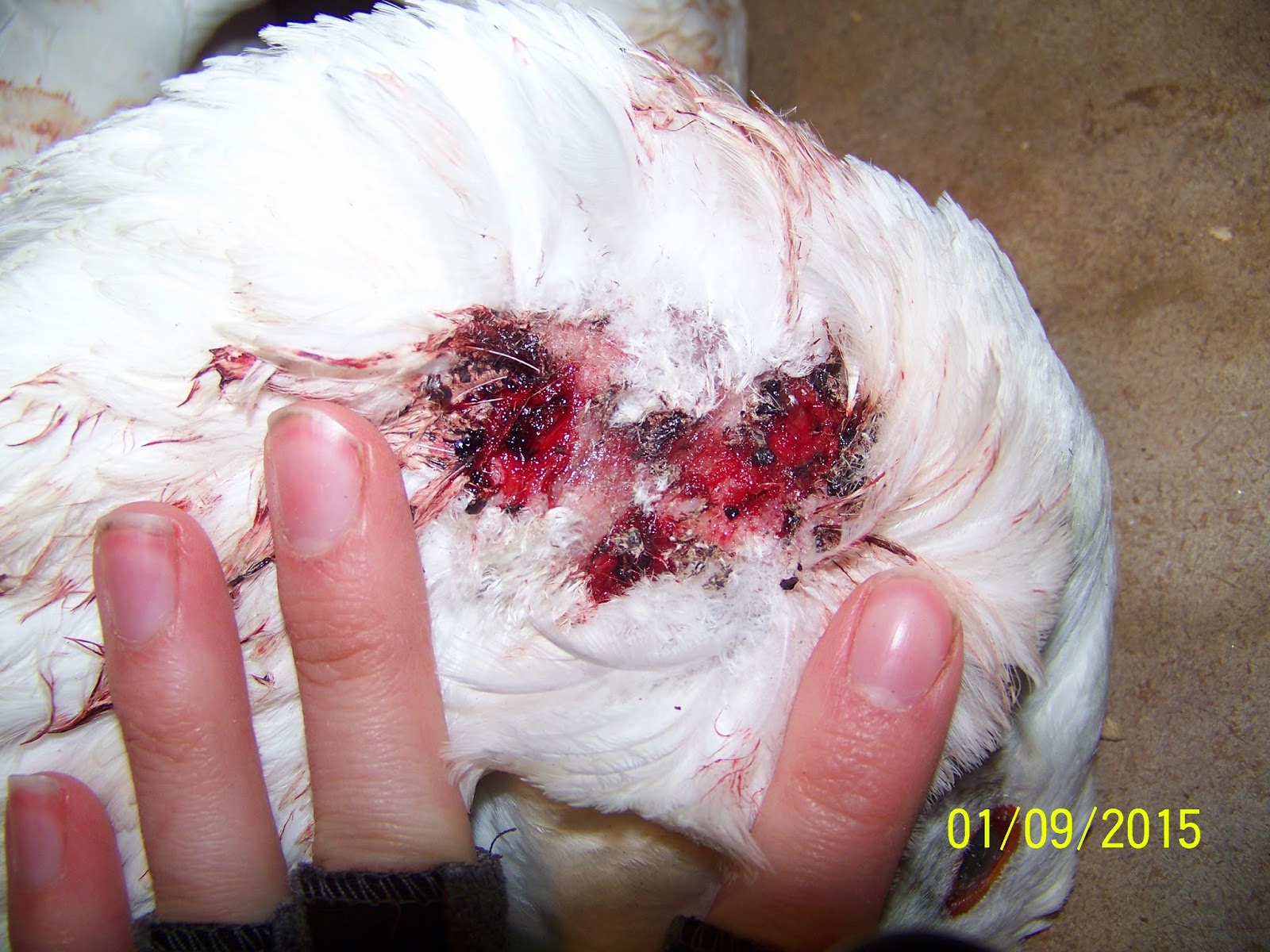 ... there was a corresponding set of bite marks on the other side, but not as gaping as these were. These were the ONLY injuries I could find on the bird. No claw marks, missing feathers - nothing.

It appears to me from these puncture marks that something latched on to his throat and he shook his head back and forth to free himself, causing the holes to tear further (I plucked out the feathers from this area so I could see better).

Then yesterday morning, the duck hen was found dead on the opposite creek bank.  It was again assumed that Fen was the culprit, and he was reprimanded and penned up. I then began to question my family further about the details surrounding the duck's death, and something didn't quite add up.

The unfortunate duck was found on the other side of the stream, which Fen only crosses with much coaxing and encouragement. She had nary a scratch on her, but upon very close inspection there were small puncture marks in the throat.

It was this particular detail that stood out to me, and I realized we had been accusing poor Fen wrongly.

Our true killer was a much smaller, much wilder animal. I strongly suspect it's either one of these:

... with the mink far more likely, since it is larger and lives in aquatic habitats.

So why not other predators? Identifying anything is a process of elimination.

All we know, is this was a skillful and experienced predator who made a very calculated strike on both birds, biting them in the exact same location. The distance between the canine teeth was approximately 1.25 inches on both victims.


The fact that each bird was killed on consecutive nights leads me to believe it was the same culprit in both instances.

Canine attacks on birds (I've witnessed many) typically involve lots of torn flesh and strewn feathers. A canine also would have been able to carry the birds (or at least the duck) further. So for me, that rules out stray dogs, coyotes or foxes.

What about cats? There are a few feral cats wandering around, but my parents' dogs chase them off any chance they get. While a cat will typically bite the throat or back of the neck, they will also leave claw marks.  And I have a hard time believing that a cat would swim into a creek to attack a duck, no matter how desperate it was. Bobcats have a much larger bite radius, and are extremely shy. Both attacks took place within 20 yards of their house.

Raccoons, skunks and opossums are typically pretty messy when they attack, mauling the animals pretty good. Opossums especially like to disembowel and eat the guts. Skunks like to eat heads. As far as the duck was concerned, the kill was instant - there was no sign of a struggle.

So that's the thinking that lead me to suspect a mink.

Although, I have a hard time believing that a 2-3 pound mink would take on a 20+ pound goose, but mustelids (animals in the weasel family) are known for being pretty bold predators.

I mean, just look at the stoat, over in Europe:


Wow! Is that amazing, or what?

Of course, there is another mustelid I hadn't thought of before: This is a previously extirpated species in Tennessee, and was reintroduced 63 miles east of here, in the Catoosa Wildlife Management Area, back in 2002. They are much larger than minks (up to 16 pounds), so it would seem a likely suspect. But I haven't heard of any sightings outside of the WMA, and really can't find any current information on the reintroduction project. So I am unsure of the likelihood that it was a fisher, especially considering this really isn't the right habitat.

My dad picked up a couple of live traps in town, and we baited the larger of the two with the dead duck last night, placing it in the exact location where she was found. 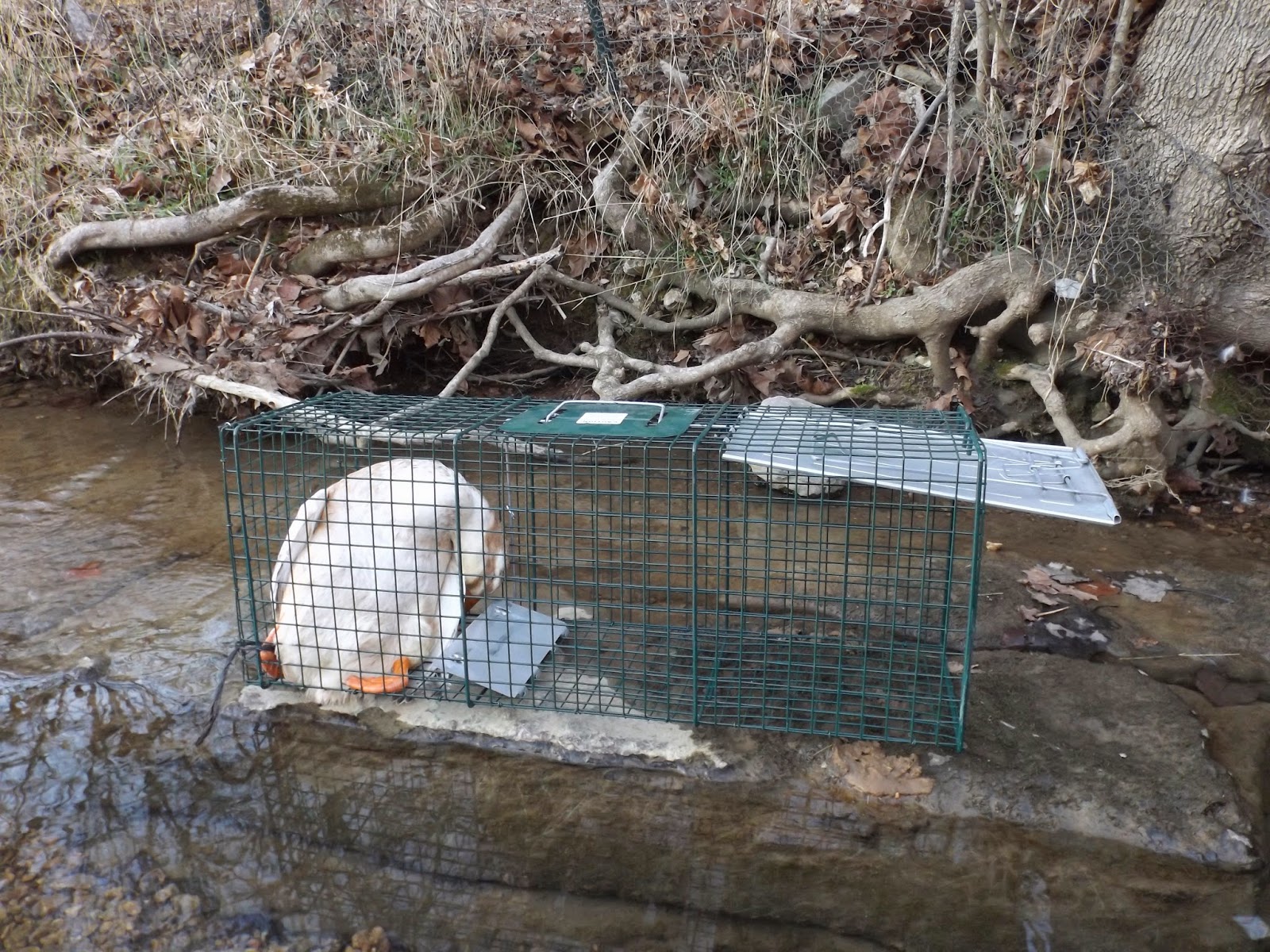 Luckily, mink are in season, so we don't have to worry about getting a depredation permit.

This morning the trap was empty, so we are going to try again tonight with the smaller trap, baiting it with sardines.

It's likely we will just end up trapping one of the many free-roaming cats in our holler, but we may luck out and catch our killer.

I don't relish the thought of trapping and killing a mink, as I really admire them. I always get excited when I see one on the lake or the river.


However, he is likely keep coming back for more, now that he's found an easy source of food. Besides, a mink pelt would be a great educational tool to have at the Park.

In the meantime, the ducks will be enduring confinement for a couple of days, along with the widowed goose. Hopefully they can be re-trained to go up at night, and will accept the goose as a member of their flock. 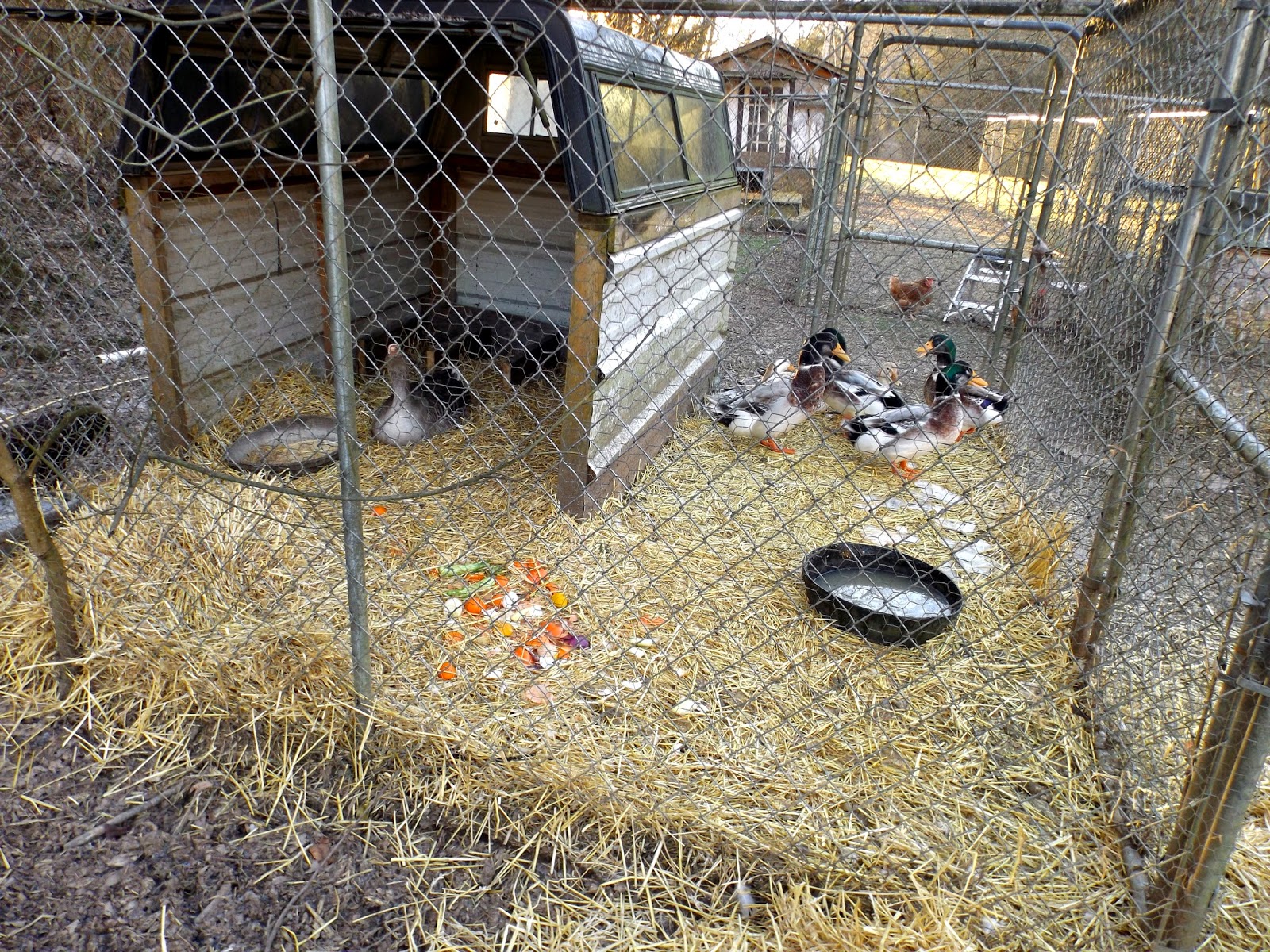 So in other news, we got the H VAC installed in our new house today!

Now that it is temperature controlled, we can get to work cleaning and painting Kilz on the sub-floors. With the air circulating, it already smells 100-times better in there!

We haven't been able to get in touch with the roofing company, so we will be having to go with somebody else. We have GOT to get a new roof on to stop those leaks!

In other, other news, I happened to take a walk on the farm this evening, planning to take some pictures of ice formations along the creek, when I decided to kneel down and get a picture of this guy... 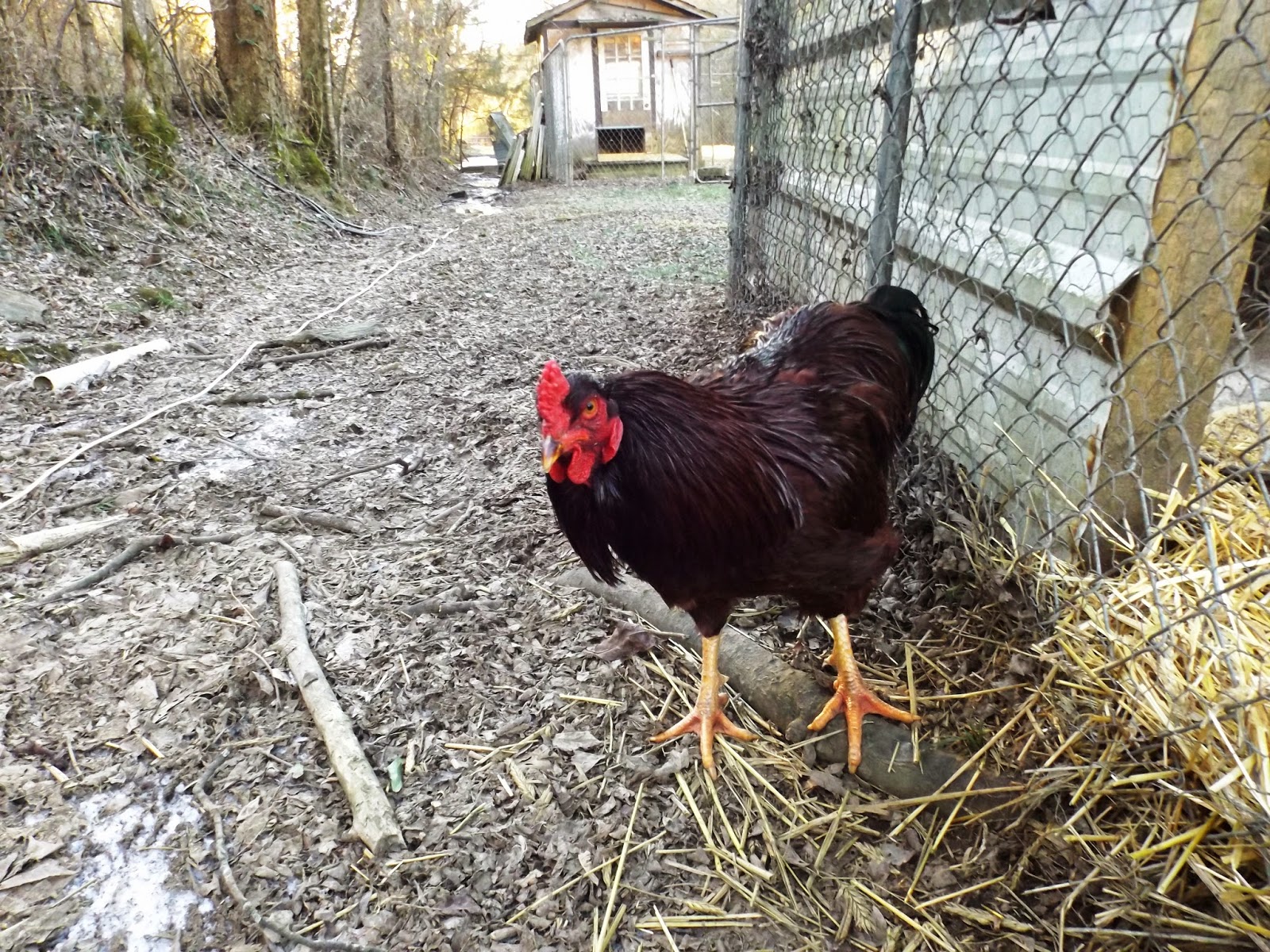 He's a young Buckeye rooster that runs loose on the farm. I've had my eye on him for awhile, as he's been starting to have a go at some of us. Well, right after I snapped this picture he tried to give me a full-on flogging.

Let's just say that didn't go too well for him... 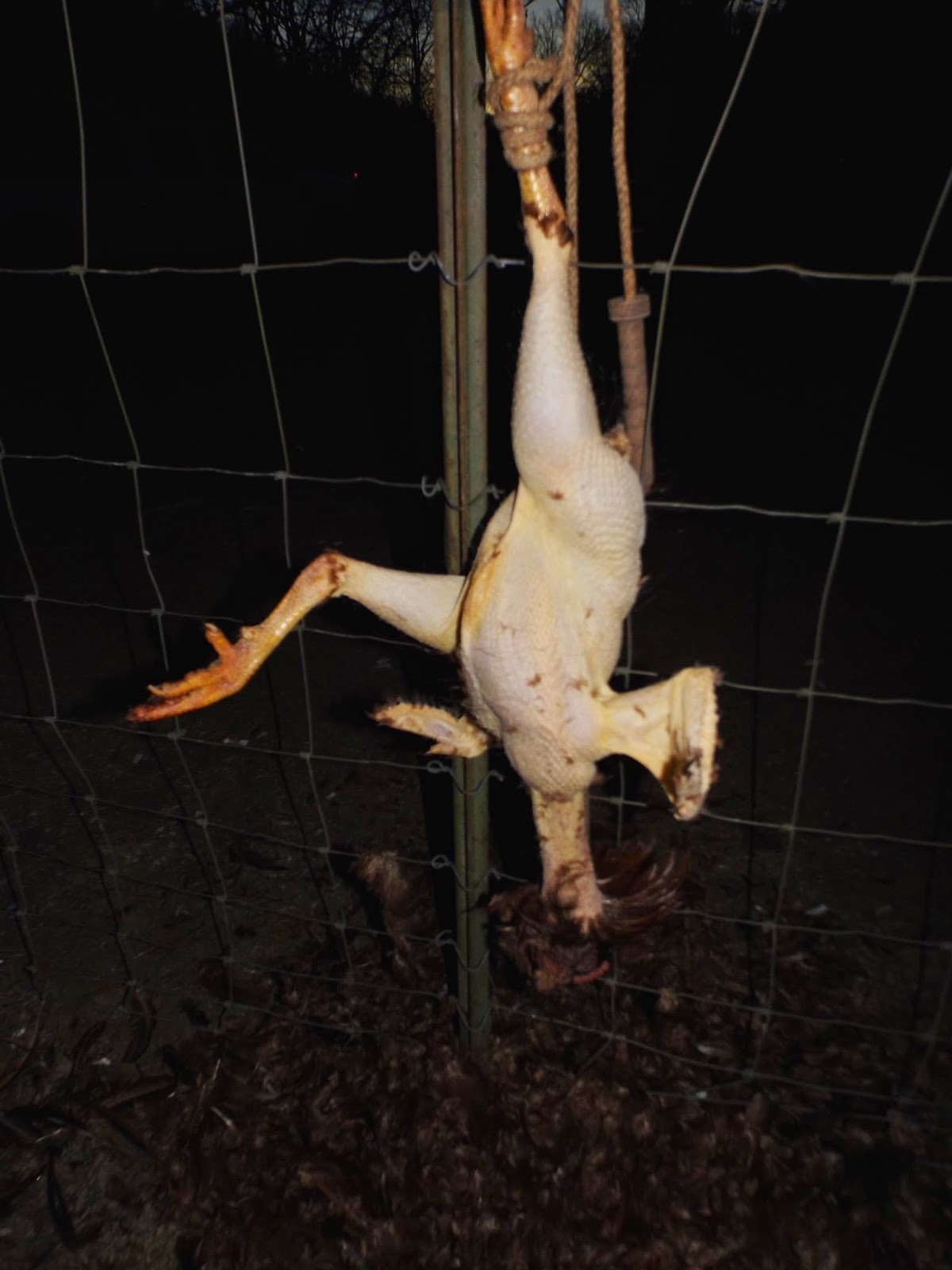 Not so tough now, are ya punk?!

He is spending the night in the warmth of our crockpot.