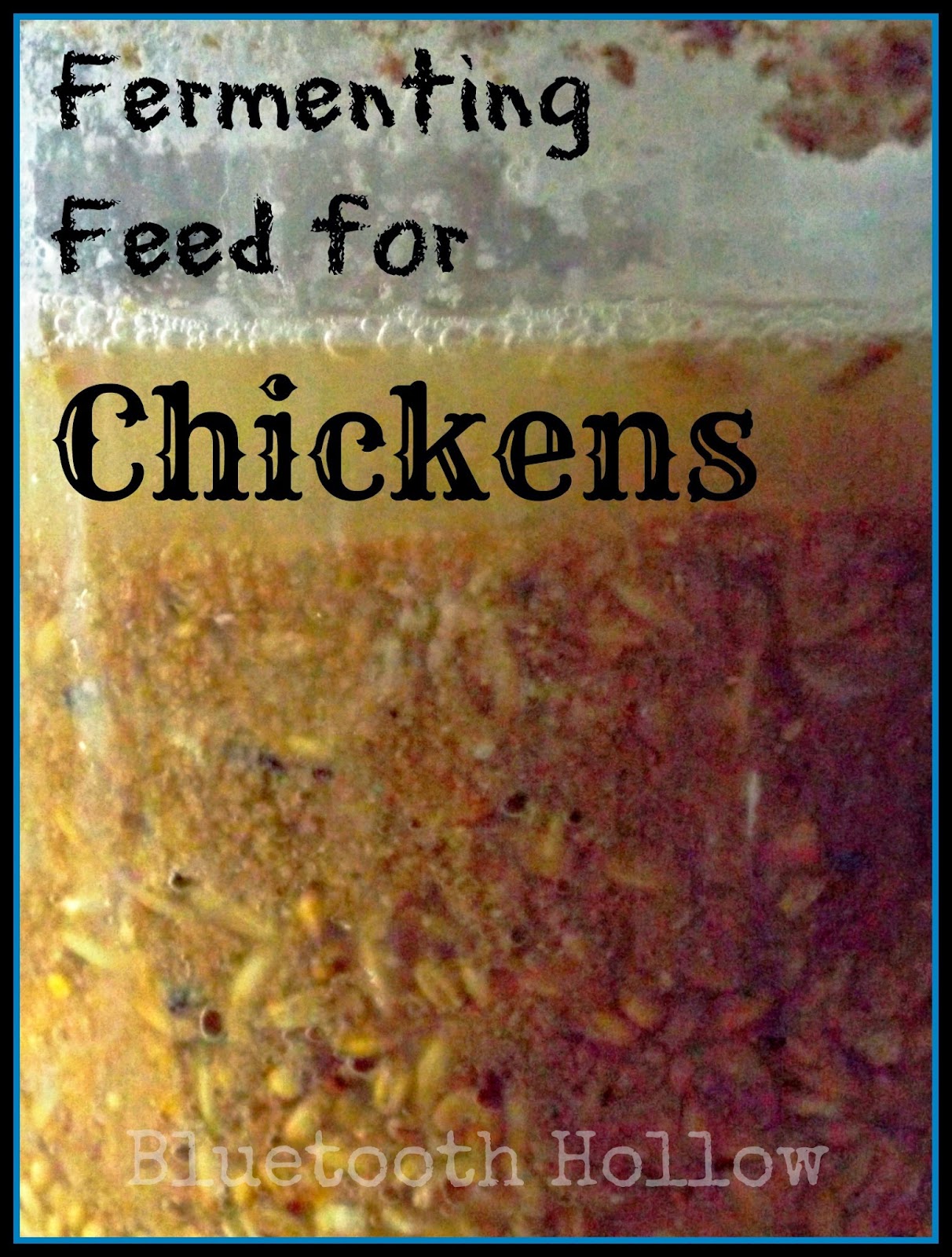 It's been awhile since I've posted anything animal related, so today I will share the latest ongoing experiment with our laying hens.

A couple of months ago, I was excited to find a locally milled, organic and soy-free layer pellet. 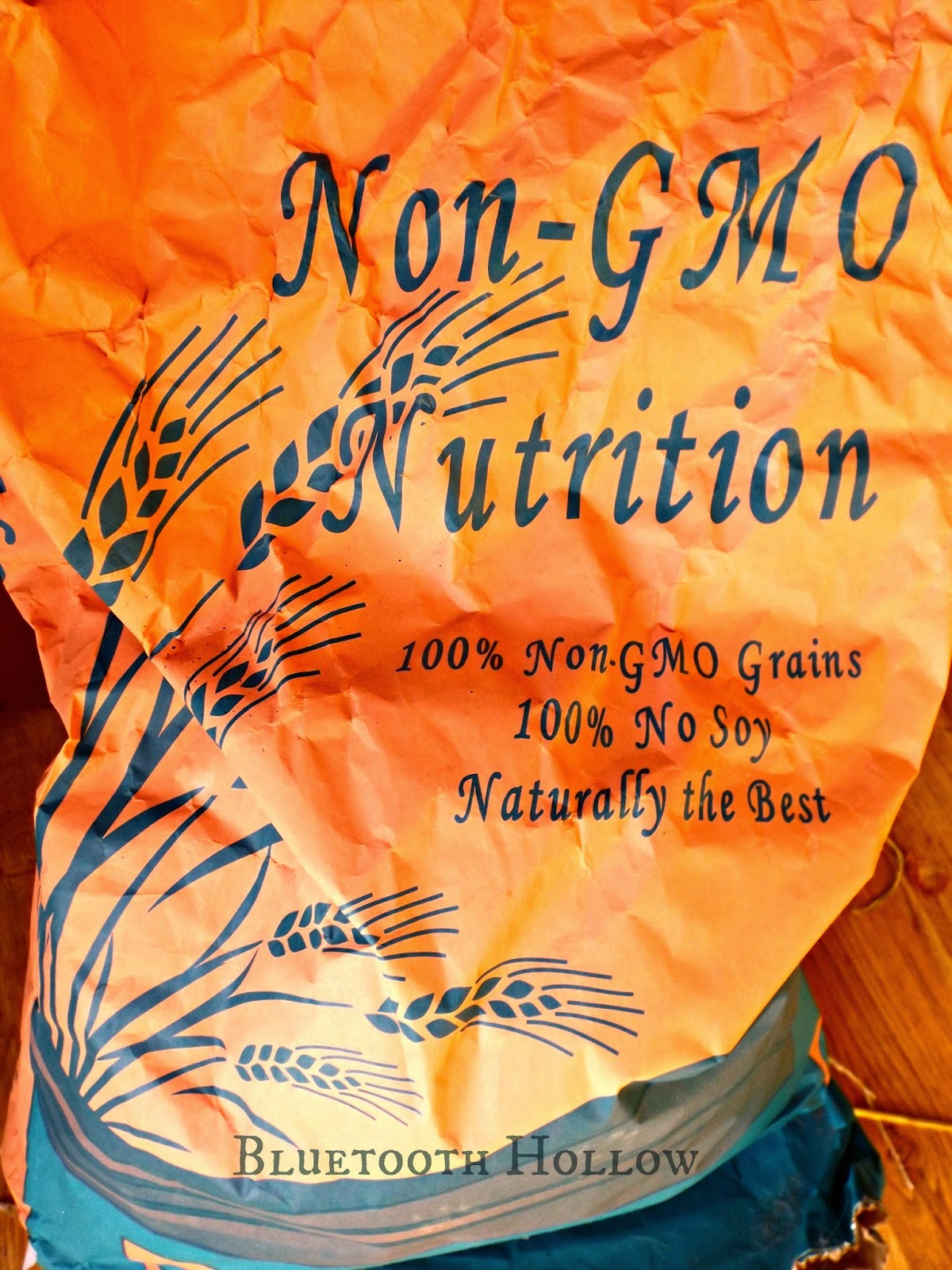 It was even reasonably priced! Score!

But my excitement wore off when I saw my chickens would NOT eat it. They would run up excitedly at feeding time, peck at it a few times, then look up at me like, "What the heck is this crap?!" Then they would walk off and resume foraging.

Things went on like this for awhile. When I picked one of the hens up, I was astonished to see how thin she was. Now I know laying chickens don't keep flesh like broilers, but I could tell that she was entirely too thin.  They acted like they were starving all of the time, and gobbled up their scratch grains like they were going out of style. Scratch grains alone don't provide everything a laying hen needs, nutritionally, so I kept offering the layer as well. It usually just got wasted (or the dogs would eat it).

I finally decided this feed wasn't all I hoped it would be. I checked for mold or spoilage, but couldn't find evidence of either. Even though it may have been made with the finest ingredients, it must have sat around too long and lost most of its nutritional value. I suppose I could have gone back and gotten another bag, but I decided to try something else first.

I was hoping to have sprouted wheat fodder to feed my hens by now, but like I posted earlier, it may be awhile before I get that up and running.

I considered just sprouting grains one or two days for them, but even that takes more time and management (and space) than I have available right now.

So that brought me to FERMENTED FEED. I had seen it pop up on my Pinterest feed from time to time, and decided I would give it a try.

It is VERY simple. You basically just need a glass vessel and some chicken feed, then you add water and let fermentation do her thing. Okay, well, there's a LITTLE more to it than that.

There are a couple of different approaches to fermenting feed for chickens. Whichever one you go with depends on the number of chickens you will be feeding, and how much space you have.

The first method is the BATCH METHOD, seen on this blog. For this approach, you use several half gallon mason jars, and fill each with one day's worth of feed, starting a new jar every day.

The other method is the CONTINUOUS BREW METHOD, which is what I am using.

The great thing about fermenting feed is you can use whatever dry feed you already have.

I got my 5 gallon glass crock ($10 at Wal-mart), added about as much feed as I thought my hens could eat in one day, and then added water. It's important that you pour enough water so that it covers the feed by an inch or two. This is what encourages it to ferment, rather than mold or turn rancid.

I used a little of whatever I had on hand. I added about three cups of layer pellets, two cups of scratch grains (cracked corn, wheat and milo), one cup of whole oats and one cup of wheat seed. I found that using a mix of layer and grains helped the mixture hold together, as the pellets disintegrated quite a bit in the water. 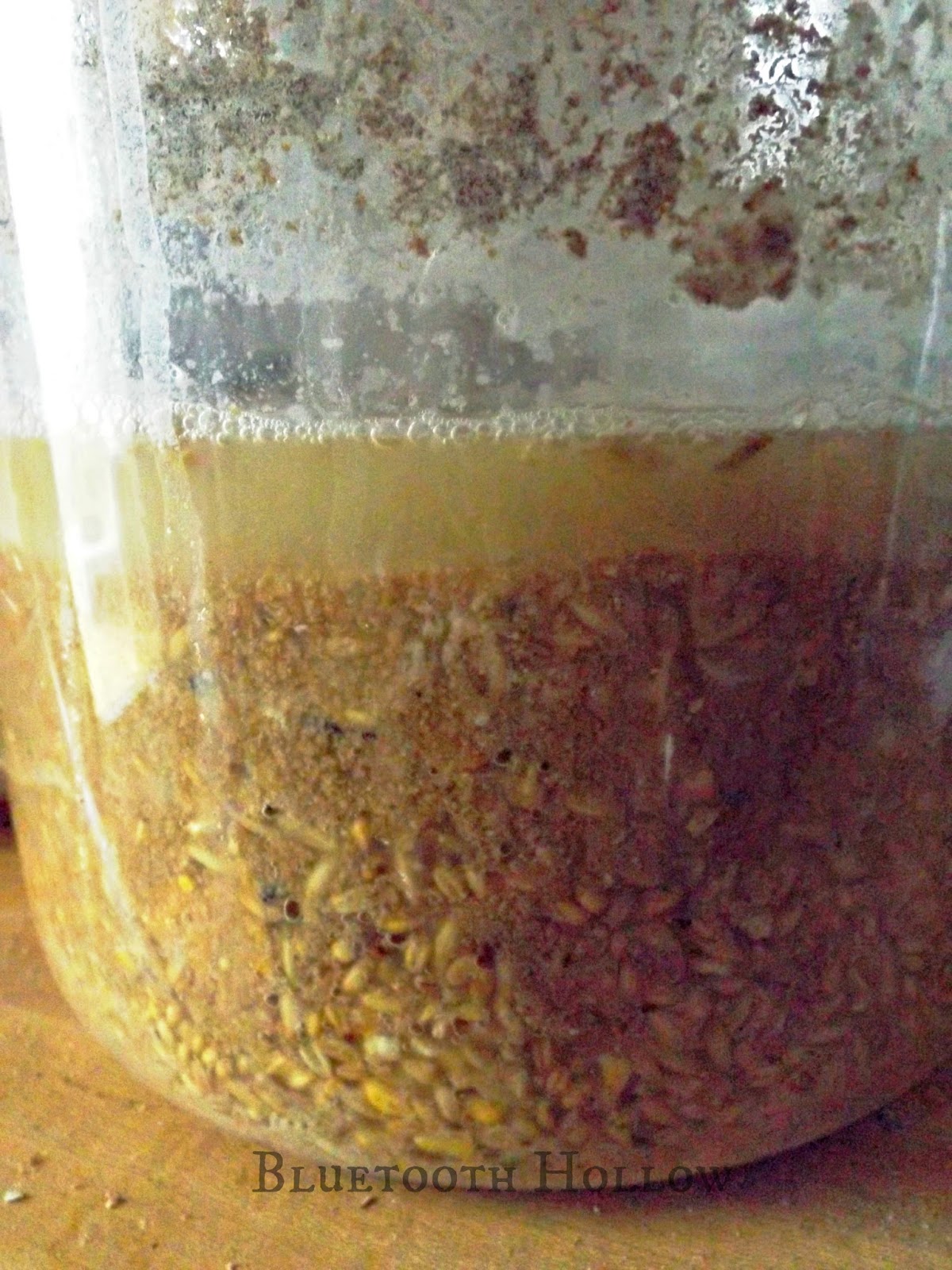 Once you add water, give it a good stir, then return a little while later to see if you need to add more water. The layer pellets absorbed a TON of water, and I ended up adding quite a bit. Make sure you cover it with something breathable, so that the bacteria have sufficient oxygen (I used a cotton tea towel secured with a long rubber band). Keep stirring it for a day or two, then leave it to do its thing. It's usually considered ready by the third day, but that will depend on the temperature of your house and size of your container.

My first attempt at fermented feed was a failure, but that was because I added black oil sunflower seeds. 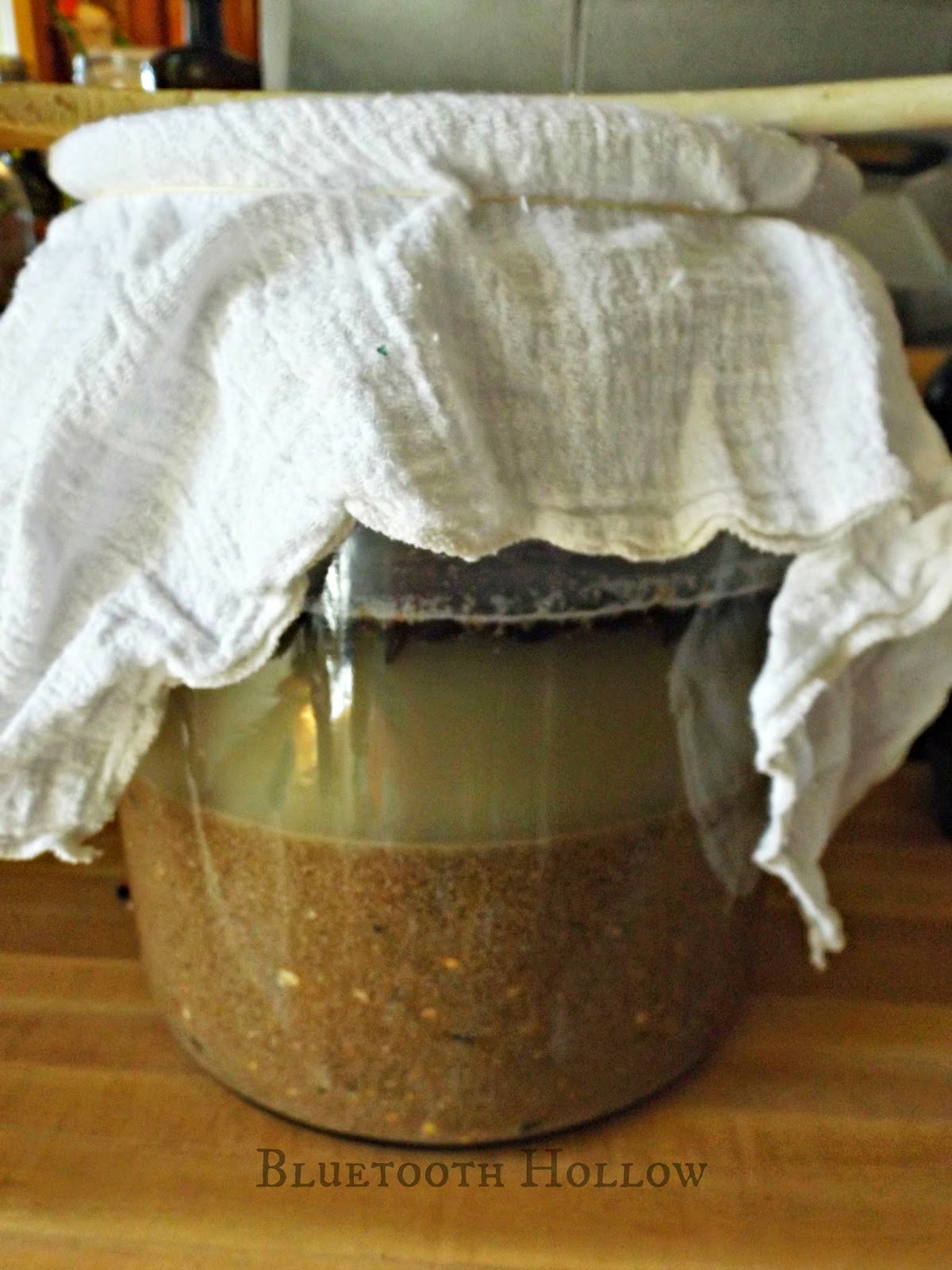 Not that there's anything wrong with them, it's just that they float. The floating layer of seed prevented the necessary gas exchange for fermentation, and formed moldy crust.

You will know it's a successful ferment by the smell.

If it smells tangy or sour, sort of like lacto-fermented pickles or sourdough, you know the lactobaccillus have won out.

If it smells rancid, moldy or alcoholic, then the correct ratios of bacteria were not achieved, and it wouldn't be healthy to feed the birds. (Incidentally, my first batch smelled rancid like vomit, so I tossed it out in the yard. The chickens still ate it with gusto, and suffered no ill effects.)

It'll start to bubble and you'll see some foam on top, like this: 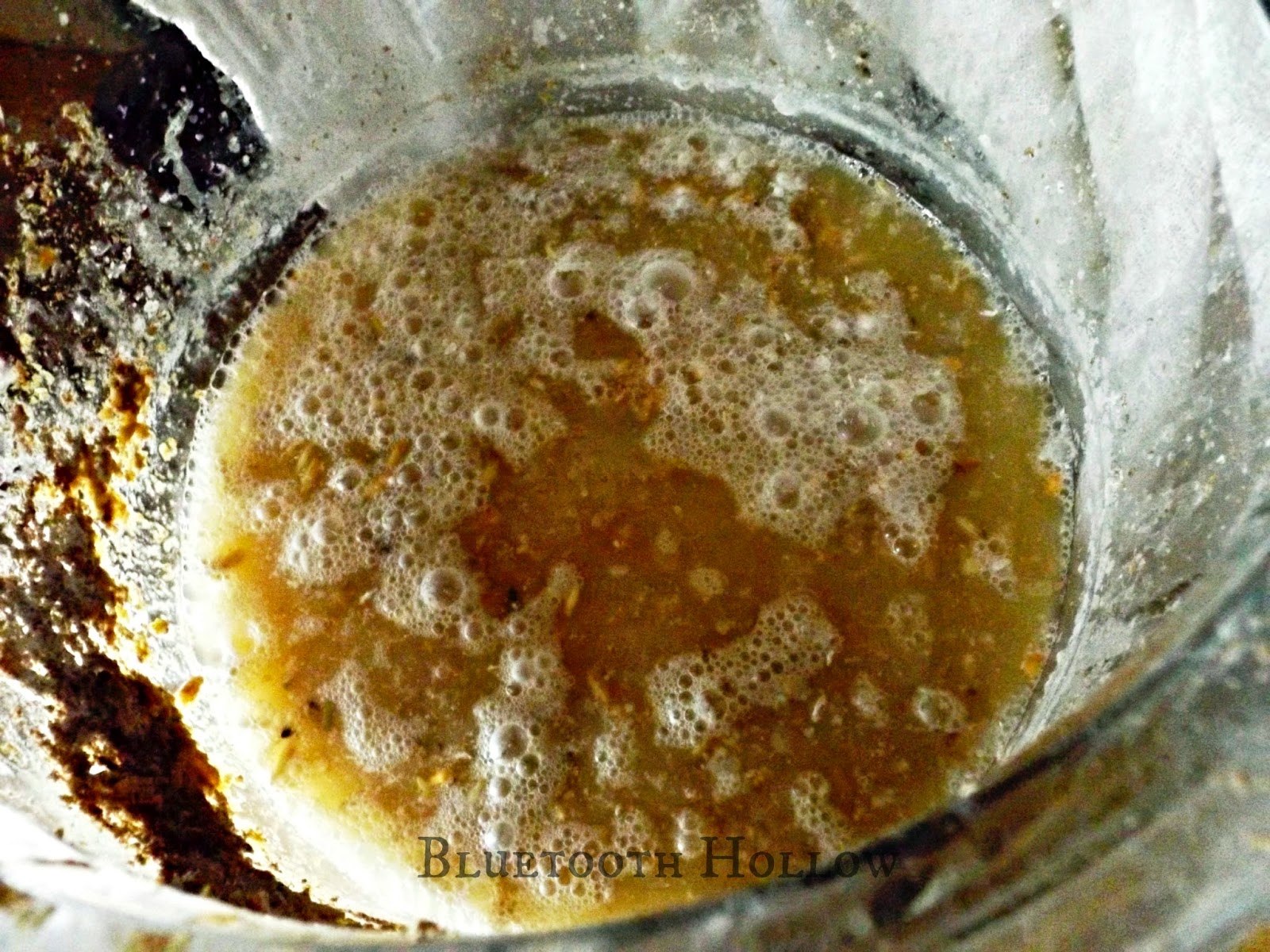 When I leave my batch undisturbed for 24 hours or more, it gets this interesting network on top, which I am assuming is a formation of yeast: 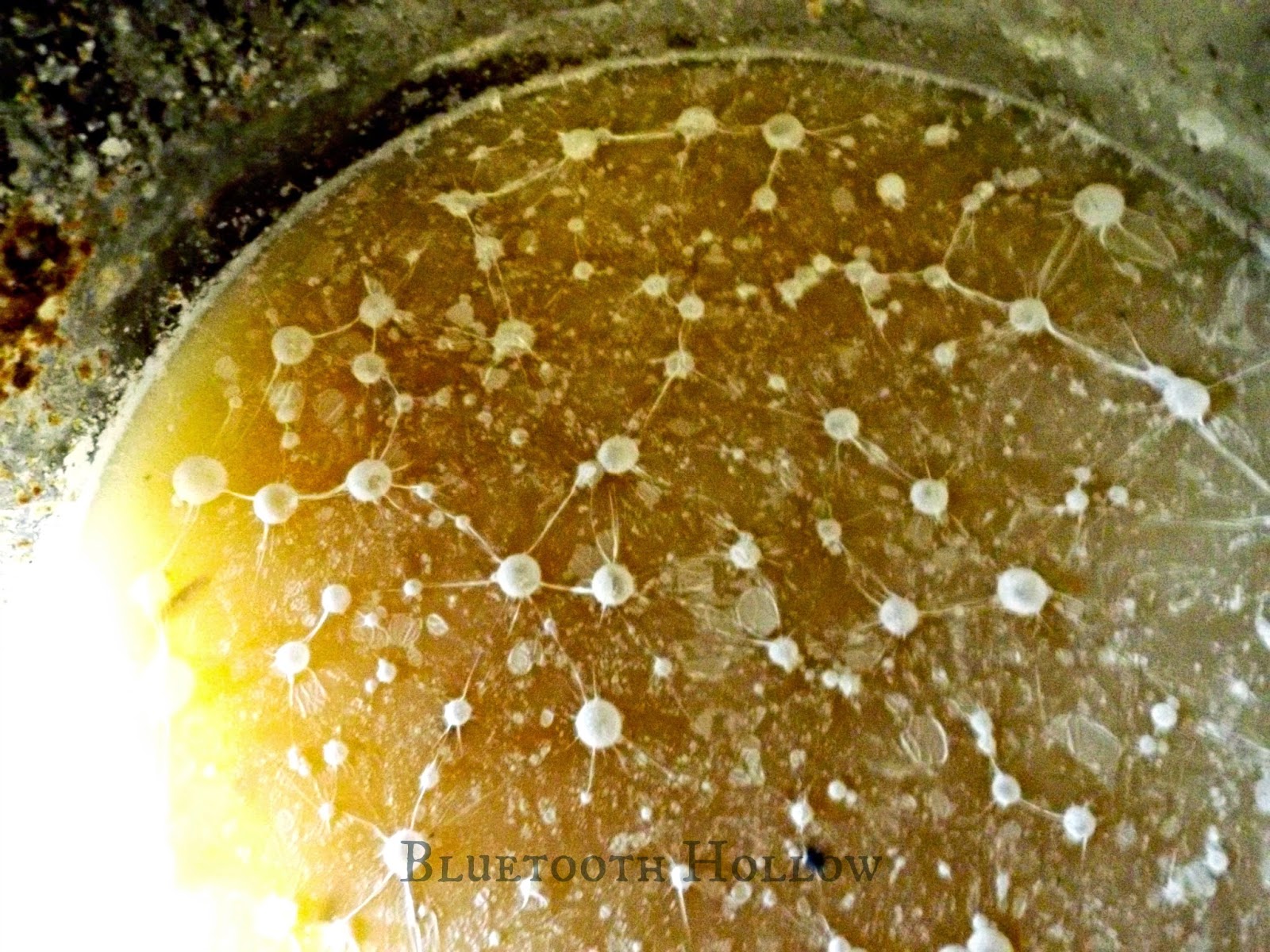 Once the feed is ready to go, just dip it out with a slotted spoon, allowing as much of the liquid to return to the crock as possible. 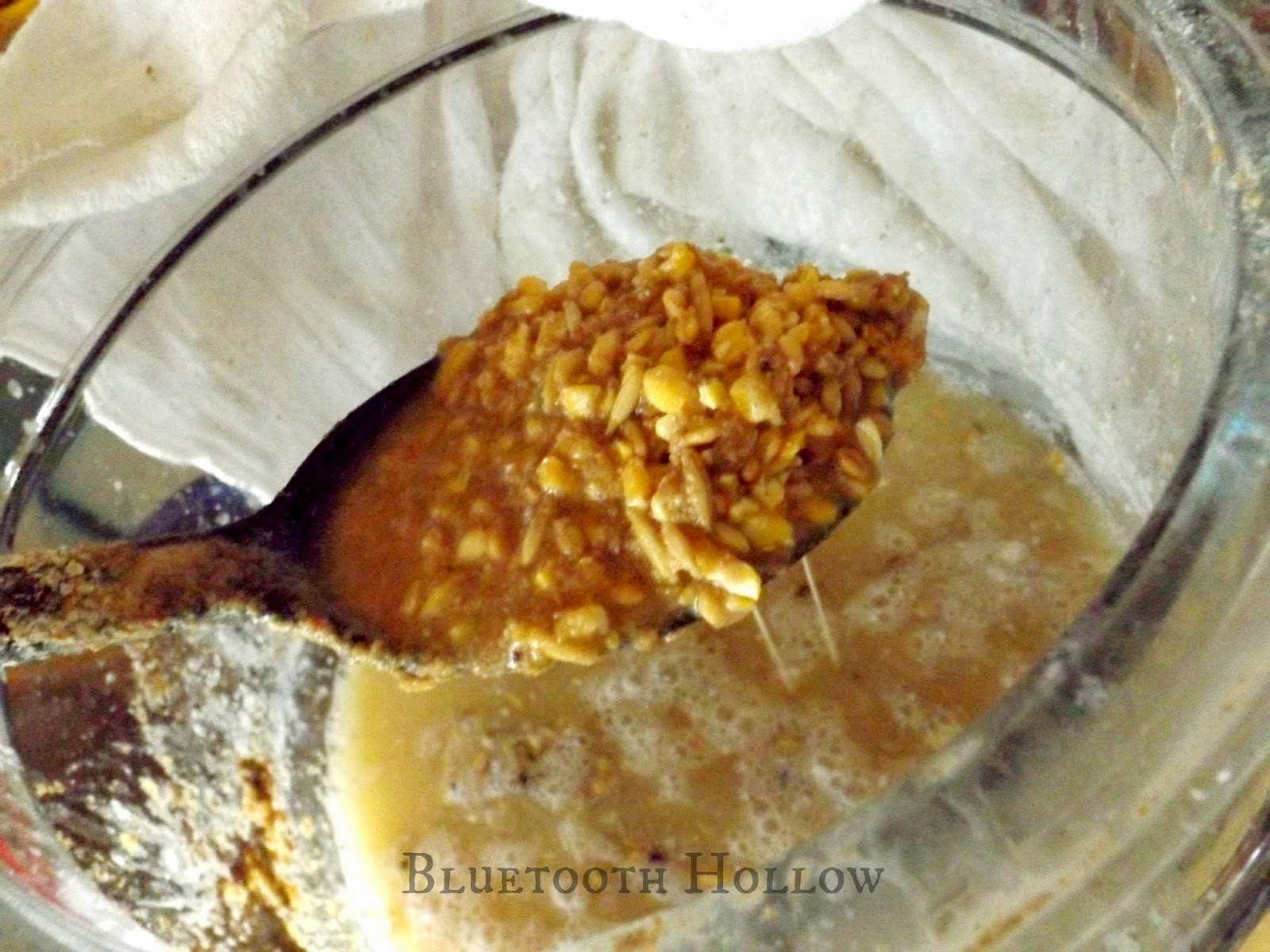 Not that it isn't good for the chickens, as they will slurp it right up. You just want to leave that slurry of good bacteria behind so it can digest the new feed you will be adding back in.

Just like sourdough starter, whatever you take out, you need to replace. Each morning when I feed my chickens, I dip out about three heaping scoops of feed. I try to add back in about the same amount of raw ingredients, and I give it a good stir, adding more filtered water if necessary.

**Side note: If you already have some ongoing ferments on your counters (sourdough, kombucha, kefir, etc.) you will need to keep the fermented feed far away from it, so they don't affect one another. Soured feed tastes great to the chickens, but you may not enjoy that flavor in your kombucha or sourdough loaf.**

So what if you don't have time to fool with fermentation? Even just soaking their food overnight is highly beneficial, and makes it more digestible. You could even throw in a capful of our good friend raw apple cider vinegar, for an added probiotic boost. 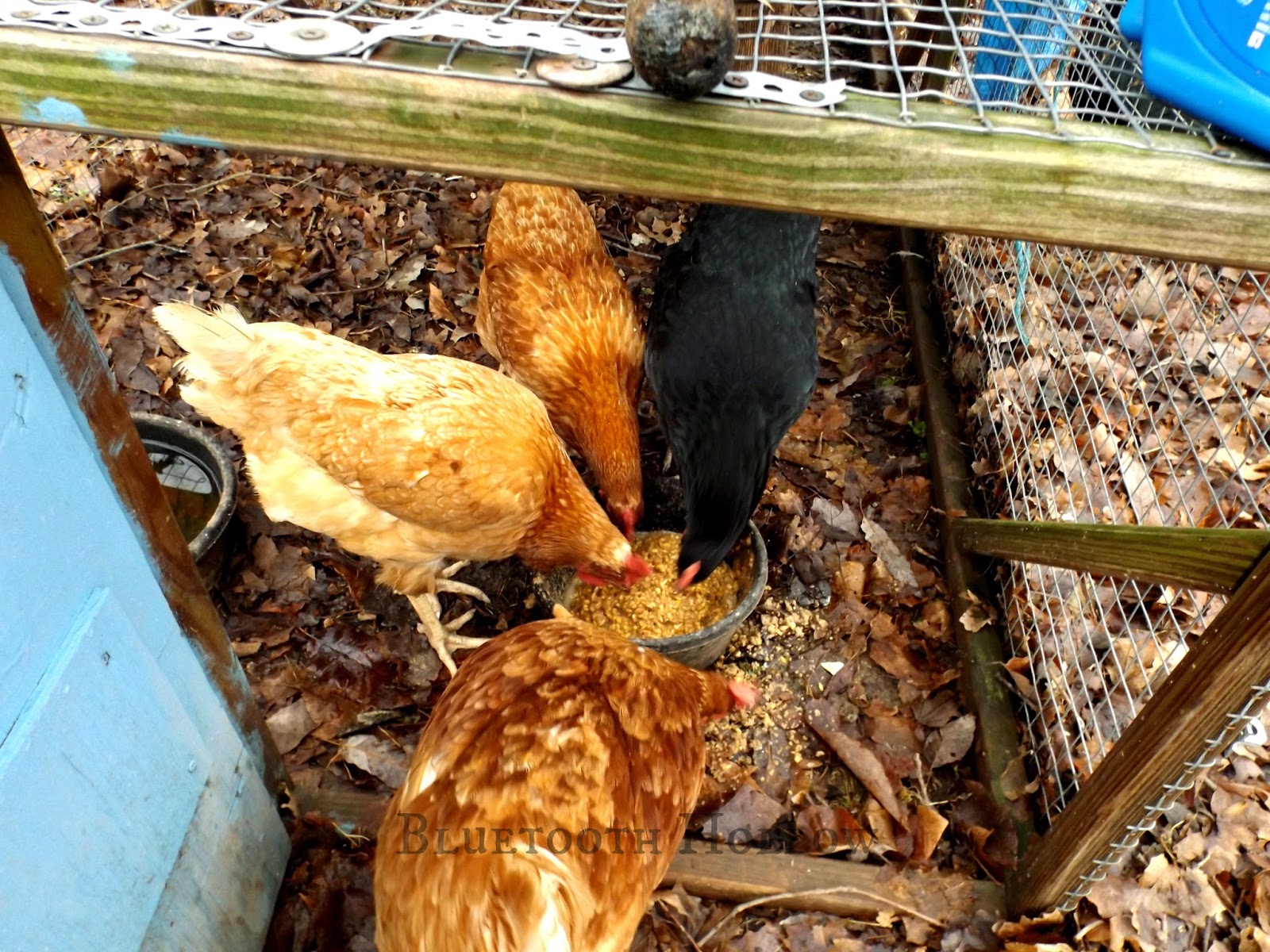 Let's just say that if a chicken could lick, their food bowl would be cleaned out.

My hope was that the boost in nutrition would help get most of the girls laying again.

The other big benefit of fermentation, is COST. This has been a great way to stretch their feed. That bag of layer that was getting largely wasted, is now brewing into a highly nutritious ration that they really enjoy.

After nearly a month of fermented feed, at least 3-4 out of 6 hens is currently laying, which is pretty good for winter. Before, we were only getting 1-2 eggs per day.

So, if you're looking for a new feeding method that utilizes what you already have, improves hen health and stretches a buck, [buck-buck, lol], why not try fermentation? 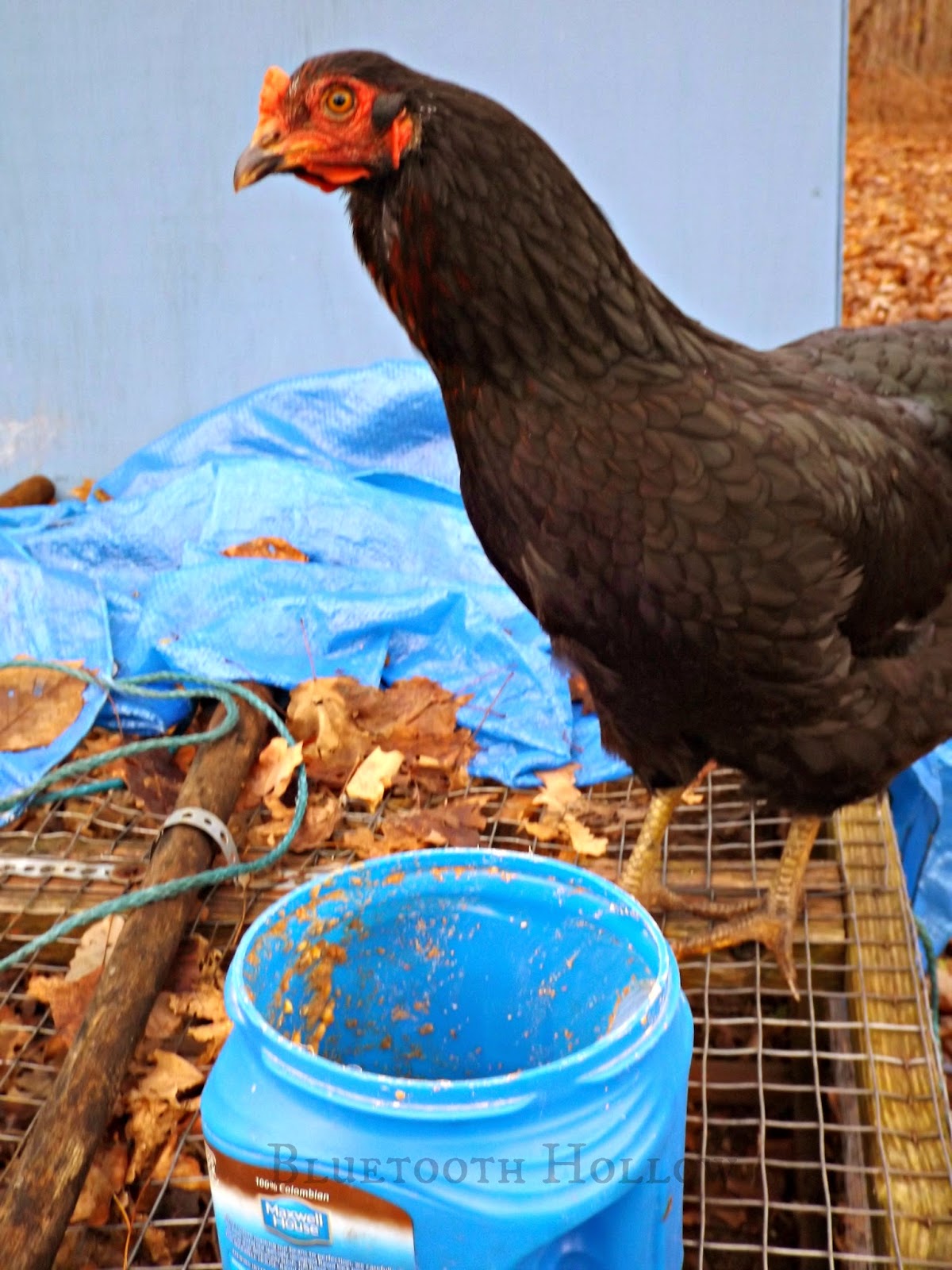 *UPDATE* : The only disadvantage I have really seen with this feeding method is when temperatures are below freezing. We've had several days with temperatures ranging from 5-25 degrees F, and the wet feed has been freezing into a solid block before the chickens could finish it. So if you live somewhere up North, you may have to get a little creative if you decide to go with fermented feed.

Shared on the Homestead Blog Hop, From the Farm Hop, Wildcrafting Wednesday and The HomeAcre Hop
Posted by Phacelia at 9:06 AM

Email ThisBlogThis!Share to TwitterShare to FacebookShare to Pinterest
Labels: chickens