For as long as we have lived in our Park residence, we have shared it with a host of other critters. I'm not just talking about our selection of pets, mind you. These would be critters of the pesky kind:

There is one beast, however, that is really beginning to try our patience and good will.

It wasn't until a couple of weeks ago that we finally discovered its true identity:

For seven years I have listened to them scratch and gnaw and scuttle and squeak in the walls, in the attic, and even under the bathtub (which makes it hard to enjoy a relaxing soak in the tub). At times the sounds could only be described as them playing ping-pong with acorns.

This cacophony typically takes place after my dear husband has already fallen into a deep sleep, and is perfectly oblivious to my tossing and turning as I try to block out the racket. In desperation, I finally bought a small fan to run in the bedroom, to help drown out their nightly activities.

Then things took a really frustrating turn when they began to gnaw into our new air ducts and start to nest in them. The air blowing through the vents brings up shredded ductwork and huge tufts of fur, which makes quite a mess, not to mention seriously aggravating my hubby's allergies. 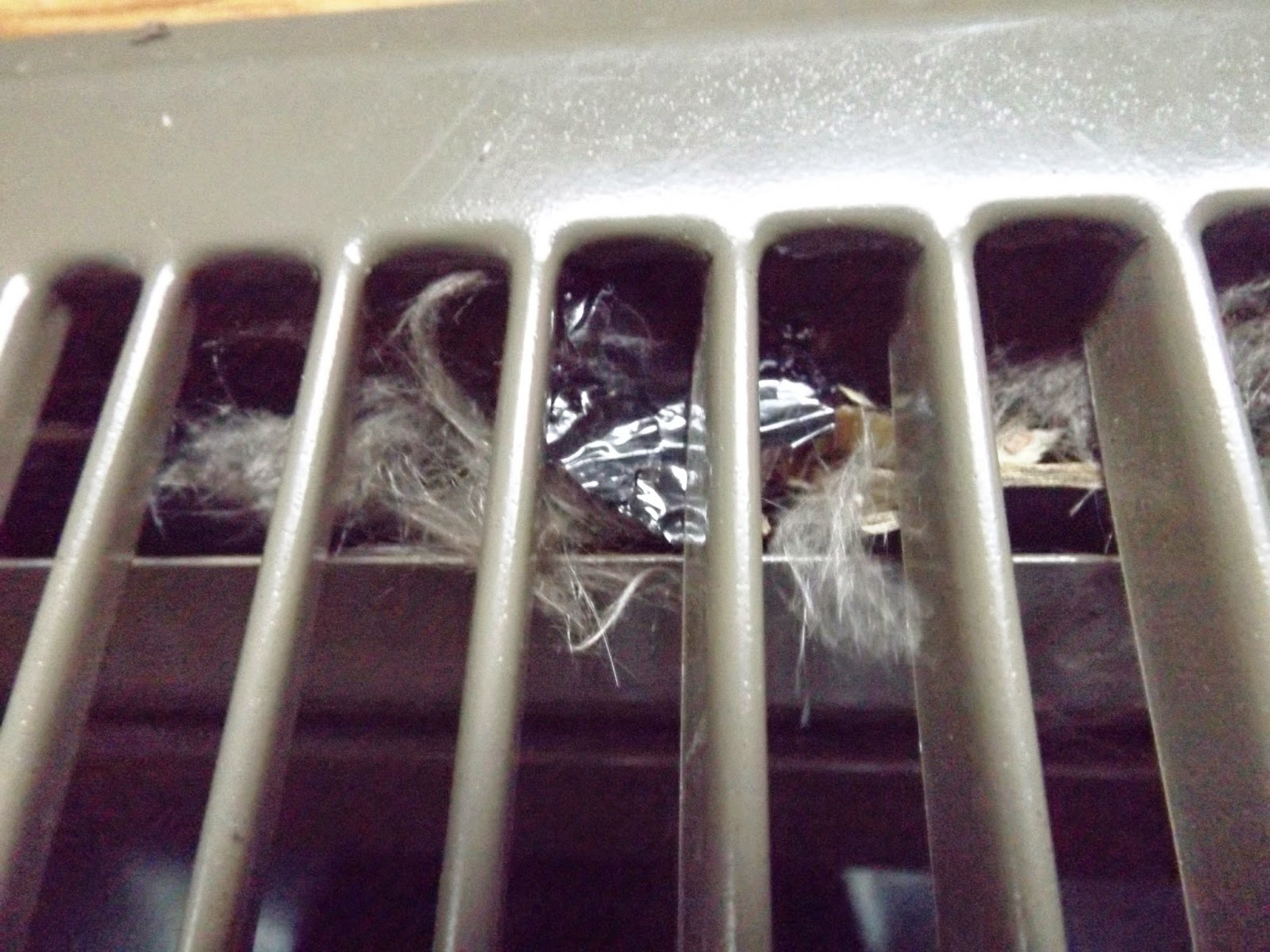 We were unsure whether these rodents were flying squirrels or rats, but a few weeks ago one of them finally breached our borders, and wandered its way into the house. We knew this invasion was imminent, as we had heard the little bastard gnawing underneath the kitchen cabinets, and started to see shredded foam insulation on the floor.

One night I heard things going bump and clatter in the kitchen.

The following evening we were gathered in the living room watching a movie, when the ruckus began anew. My husband tiptoed into the kitchen, expecting to see a mouse, but then exlaimed:

We found him hiding behind the feed bins, and decided there was one solution to this problem right outside the door, ready for action:

Dioji isn't exactly a seasoned rodent exterminator like my Tavi was (sniff), but I figured he could get the job done. 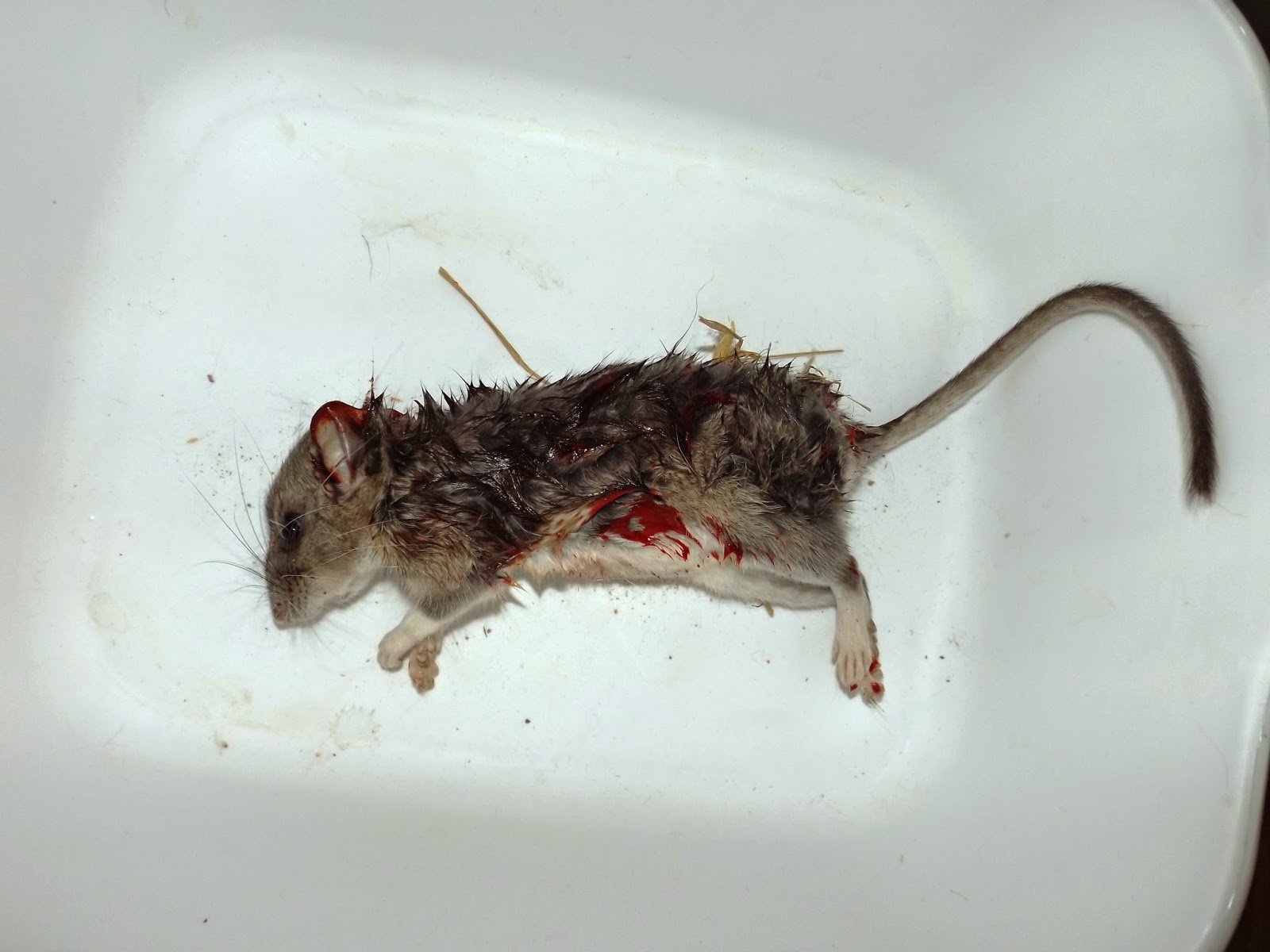 ... but not without getting a a good nip on the nose - that is HIS blood, not the rat's.

So we finally had a picture of our perpetrator. I have to say, I find them quite cute. But then, I am partial to rats, since I've had them as pets.

However, they have caused us enough trouble at this point, that we have to take action against them.

Mark filled the hole with more foam insulation, to help keep them at bay a little longer, but they were soon gnawing away at it again.

Last night I, once again, heard clattering coming from the kitchen, and knew another one had made its way in the house. I was busy nursing a baby, so I didn't bother trying to get up and address it.

This morning, sure enough, there was a big pile of shredded insulation on the floor, and a few "deposits" left on the kitchen counter. But that wasn't all.

Later on, I was getting some food together to take down to mama rabbit and her babies, and went to scoop out some black oil sunflower seeds from the bag. I was puzzled when something prevented me from digging the scoop into the seed. What IS that? I thought.

I opened up the bag and was surprised to see an odd collection of objects that had been purposefully stuffed in there. 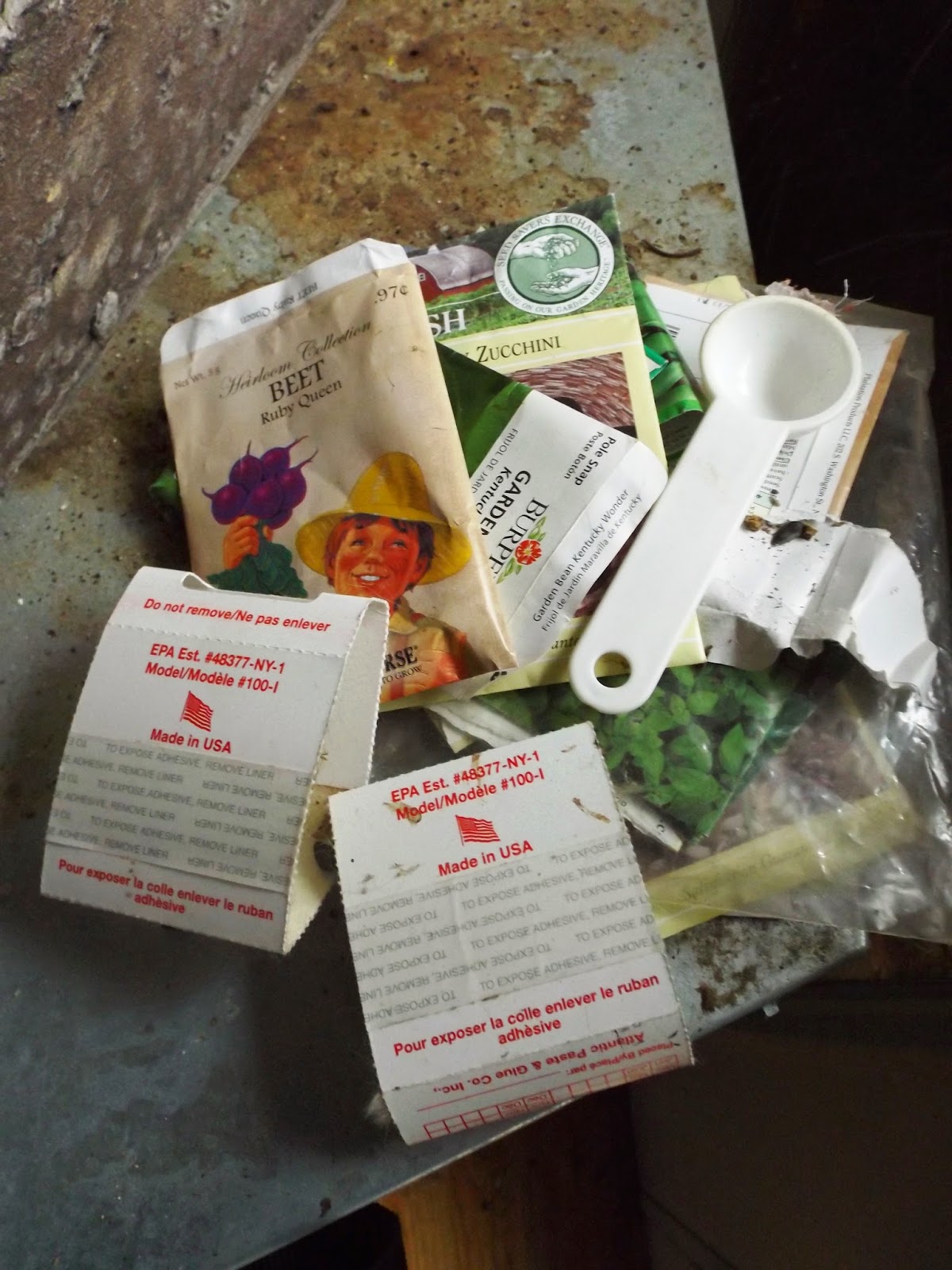 There were two glue traps (ironic, yes?), several packets of vegetable and herb seeds, and a tablespoon.

You see, woodrats are also known as "pack rats", since they have the same habit of collecting objects as their Western counterparts.

I was actually pretty amused by it.

I began thinking about all of the things that have gone missing over the years...

... socks, jewelry, flashlights, hair bands and a slew of other random objects.

We always attributed these inexplicable vanishings to "little gnomes," (or really, just our pathetic organization skills).

Perhaps, many years down the road, if this house is demolished, they will find all of our missing stuff crammed into the walls and attic.

Now, I really don't think they have gotten into our house before now, but it's still an amusing thought.

There are two species of woodrat in Tennessee: The Eastern and the Allegheny. Only an expert could tell the difference, as they are identical in appearance. Although I think the Allegheny is found further east and at higher elevations.

Both species are pretty uncommon, and listed as "in need of management" by the Tennessee Department of Environment and Conservation (which happens to be the hubs' official employer). On the one hand, it's kind of cool to live in close proximity with a disappearing creature.

Unfortunately, though, this invasion really cannot be allowed to go on. While they don't pose the same dangers as the introduced brown rat (also known as the sewer rat), they are still causing major problems for us.

So it looks like we'll be baiting underneath the house, unless we can find a better alternative.

In other news, we will be turning the power on at our new place, this week. Fingers crossed nothing bursts into flames (although I think Mark is holding out hope that the house WILL burn down so we can collect insurance money and buy a house that doesn't need so much work).