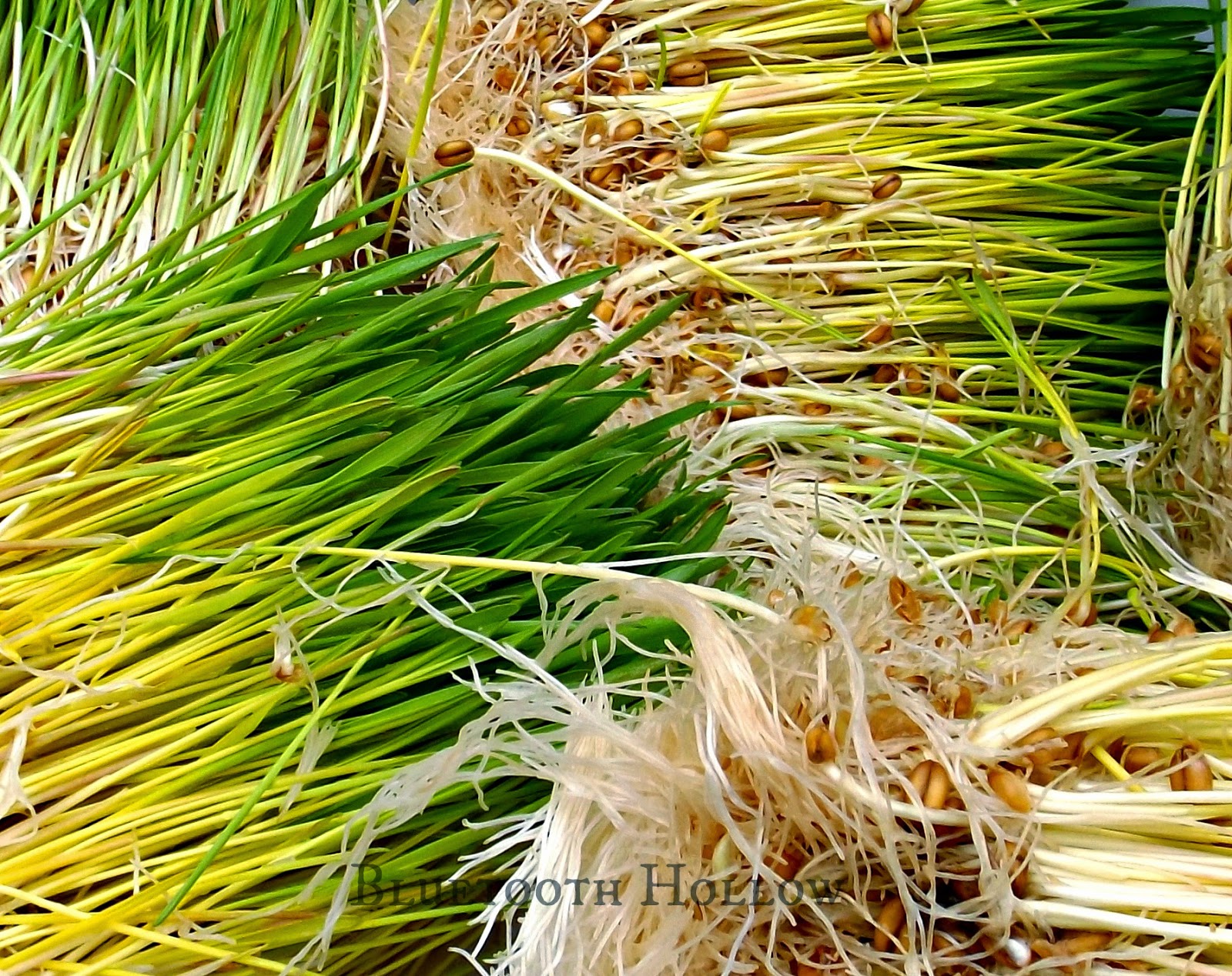 I'm very excited to report that the first batch of wheat fodder was a resounding success!

I decided it was ready on the 8th day - once the grass was about 6 inches tall, and just before it got its second leaf. This is the point at which the sprout has reached its maximum nutrition and protein levels.

It had transformed from 1.5 pounds of wheat seed, to a 7 pound mat of sprouted grass! Amazing! 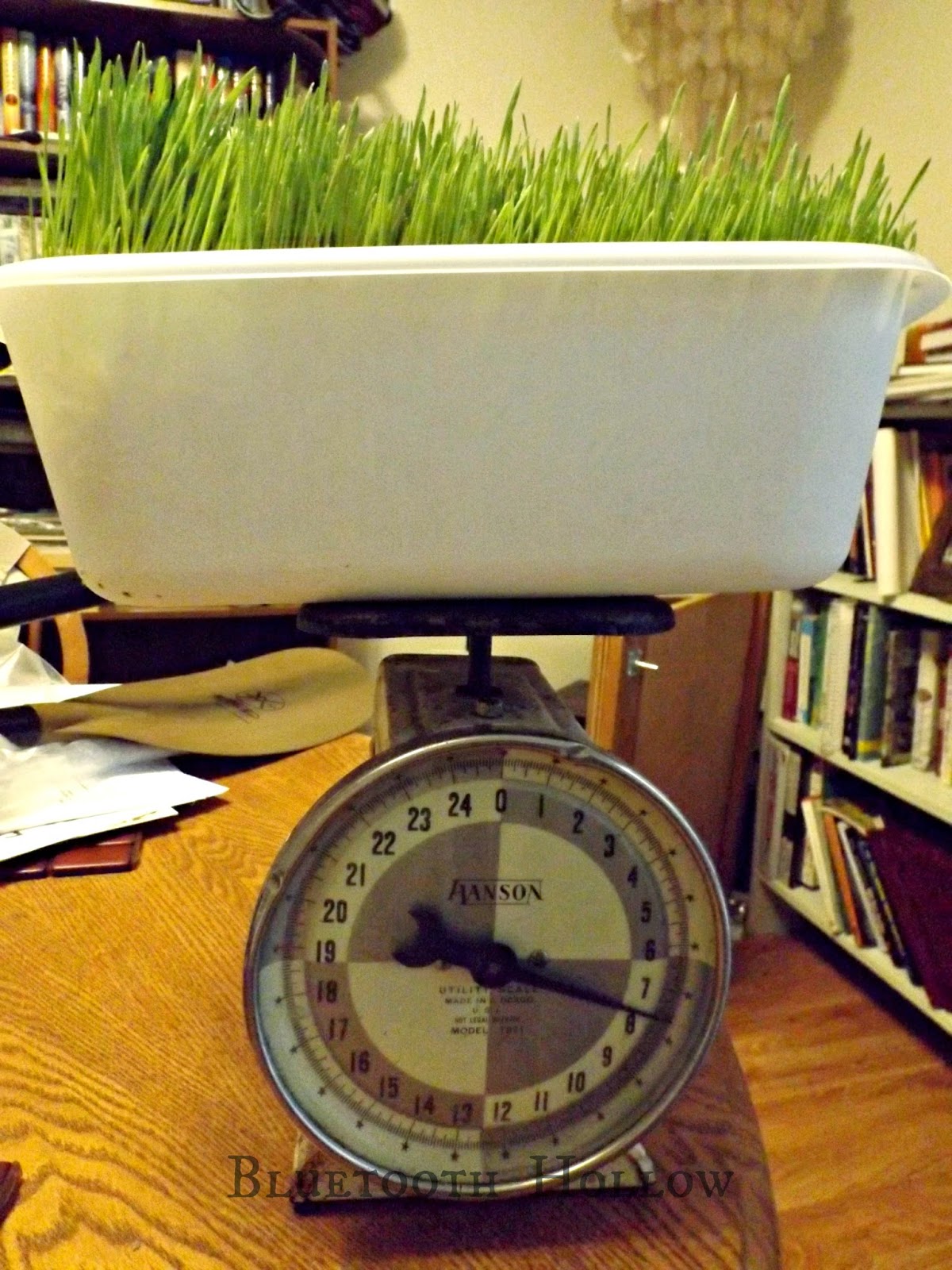 I used a bread knife to slice it up into portions weighing about 0.5 pounds each... 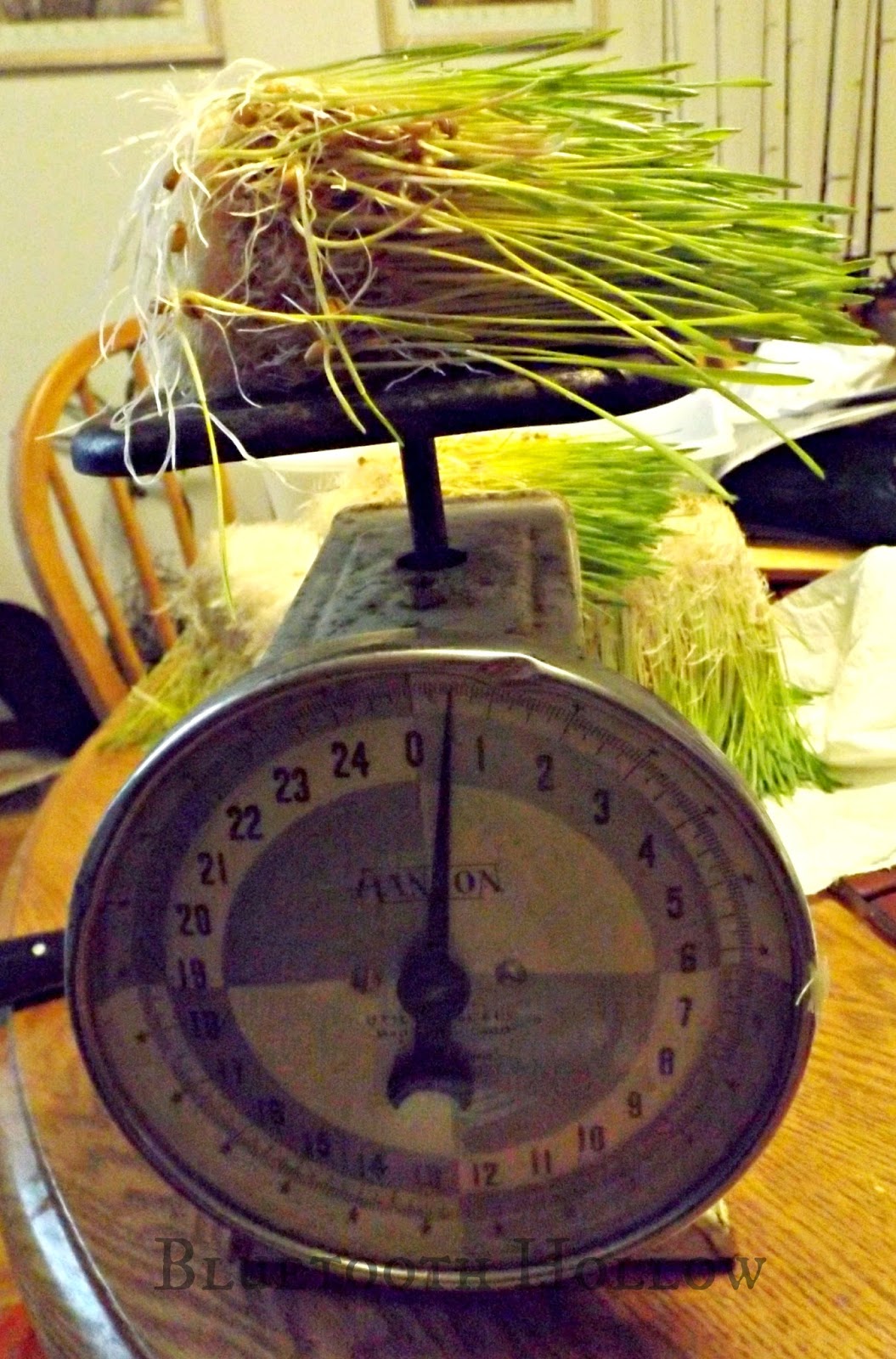 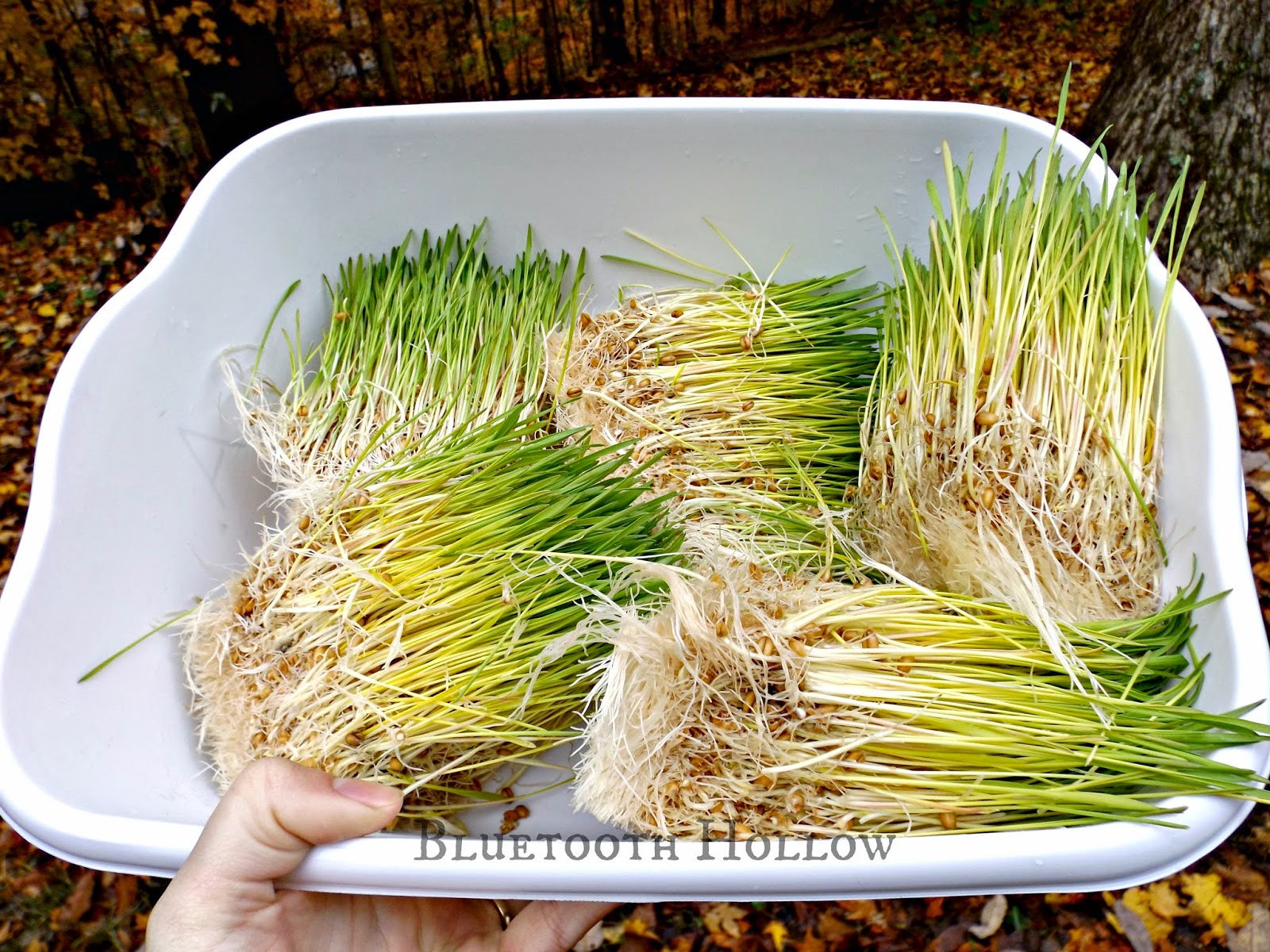 I only served half of the fodder mat, since I was only feeding five rabbits, and tossing the sixth piece to the chickens to see if they would show any interest.

So what did they think? 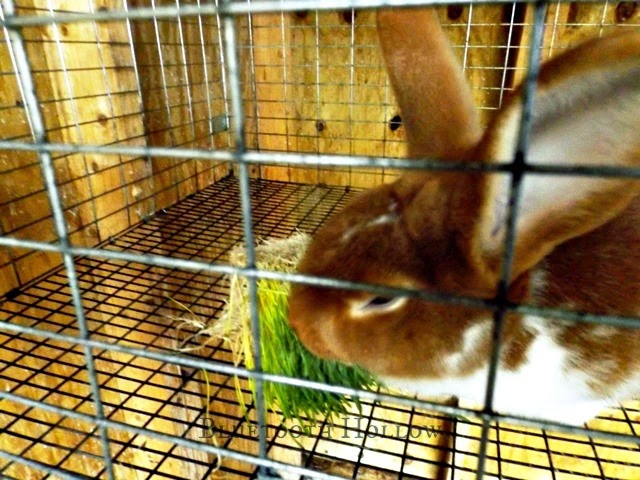 Ichigo was the most eager to dive in, munching up roots and all. 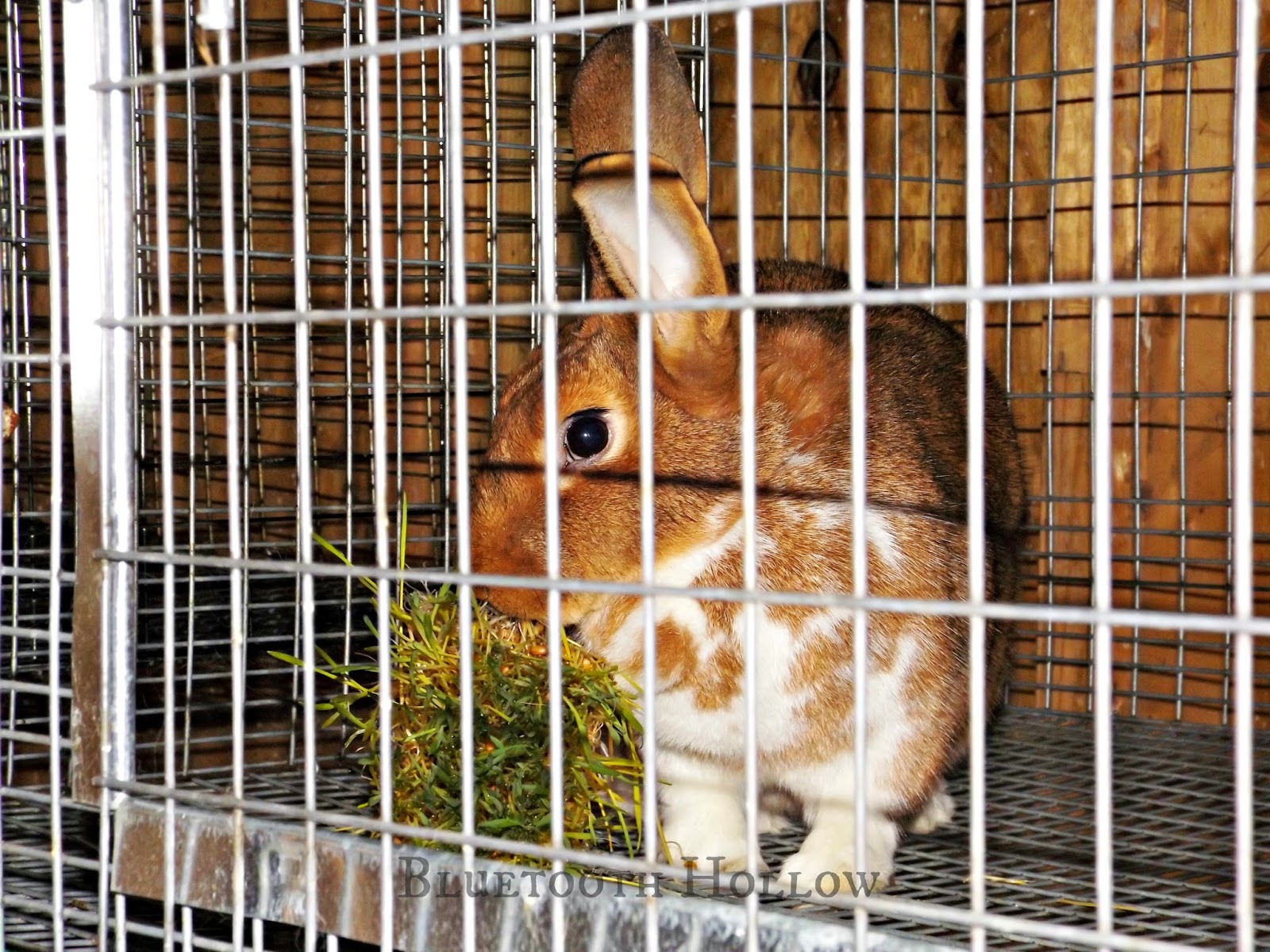 Cardamom tucked right in too.

The others were a little more suspicious, but eventually began to nibble away. I didn't really think the chickens would be very interested, but at least one hen stepped forward and began to eat it. I'll check later and see if they finished it.

Notice the uneaten layer pellets in their bowl. They have NOT been wanting to eat them, lately, even though I've tried two different brands. They'll pick through them, but then act like they are starving when I give them grain or turn them out to forage. I may just switch them to fodder as well.

I didn't linger outside very long to see how much the rabbits were eating, since dropped from 70 degrees yesterday to 32 this morning. Brrrrrrr!! Welcome to Tennessee, folks.

So it looks like, for at least five rabbits, one tray is more than enough.

I cut the rest of the mat into servings and put them in the fridge for tomorrow.

I can probably just plan to start one tray every other day, from here on out.

Once I've ironed out any problems with my system, I'll post a full tutorial on the process, so look forward to that in a few weeks!

I am FINALLY, at long last, getting my replacement Creme d'Argent does!

We'll be making the trip on the 23rd to pick them up! Yippee!

My rabbitry will soon be 7 rabbits with possibly two litters on the way!

We may be needing more cages soon.

I guess it's a good thing we'll be saving money on feed by switching to sprouted fodder!

Follow the chicken to join the Homestead Barn Hop!