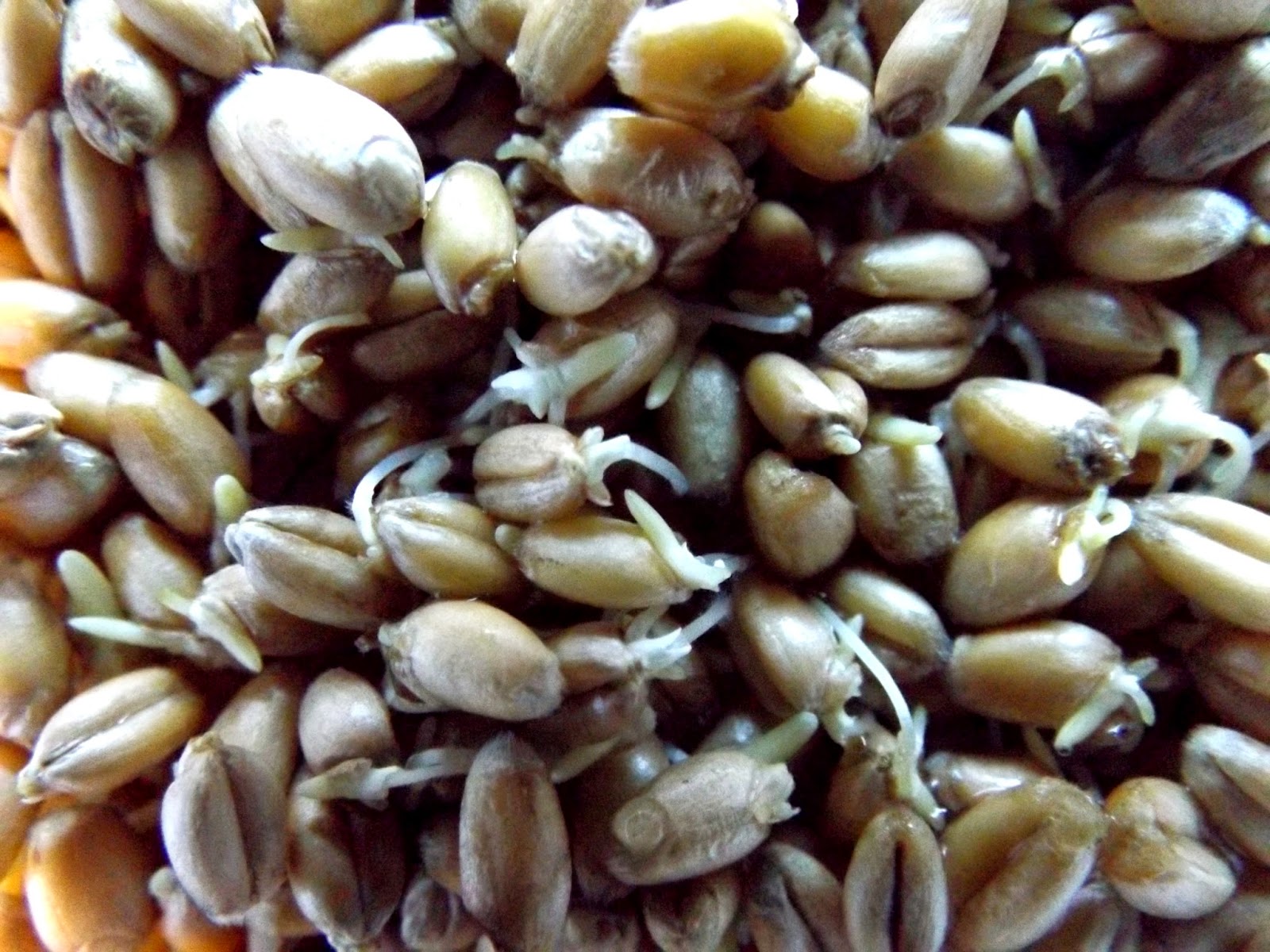 So awhile back I shared a post on my plans to start sprouting barley fodder to feed my rabbits.

My biggest obstacle has been sourcing the barley. It is apparently VERY difficult to find in the Southeast. Hardly anybody grows it.

I did discover that Windy Acres grows organic barley, among other things, but they are 1 1/2 hours away.

I asked around local feed stores, and finally found one that could order it. But, he said, it would be a two week wait and it probably wouldn't be available much longer with the planting season coming to a close. So I asked him if he had any wheat. Yep, $11.50 for a 50 pound bag.

I weighed my options: I made sure and asked the store clerk if the seed had been treated in any way, and he said we could grind it up and eat it ourselves, if we wanted to.

That's good enough for me. I'm sure it's probably doused with glyphosate and all that jazz, but it will still be far healthier than pellets.

Speaking of which, this came at a good time, because the last bag of pellets I bought I was NOT happy with. They were full of all kinds of crap and fines, and it gave half my rabbits loose droppings.

Thanks a lot, Manna Pro, I wash my hands of thee!

Of course, I'll need to transition the rabbits slowly onto the fodder, so I'll have to to feed them pellets a little longer.

I also spent a huge amount of time looking in every store I could think of for the right sized Tupperware trays to grow the fodder in. I looked in Dollar General, Big Lots and Wal Mart. No cigar.

So I finally checked Dollar Tree and found these white dishpans for a buck each. While they still weren't the size I wanted, I decided I could make them work. 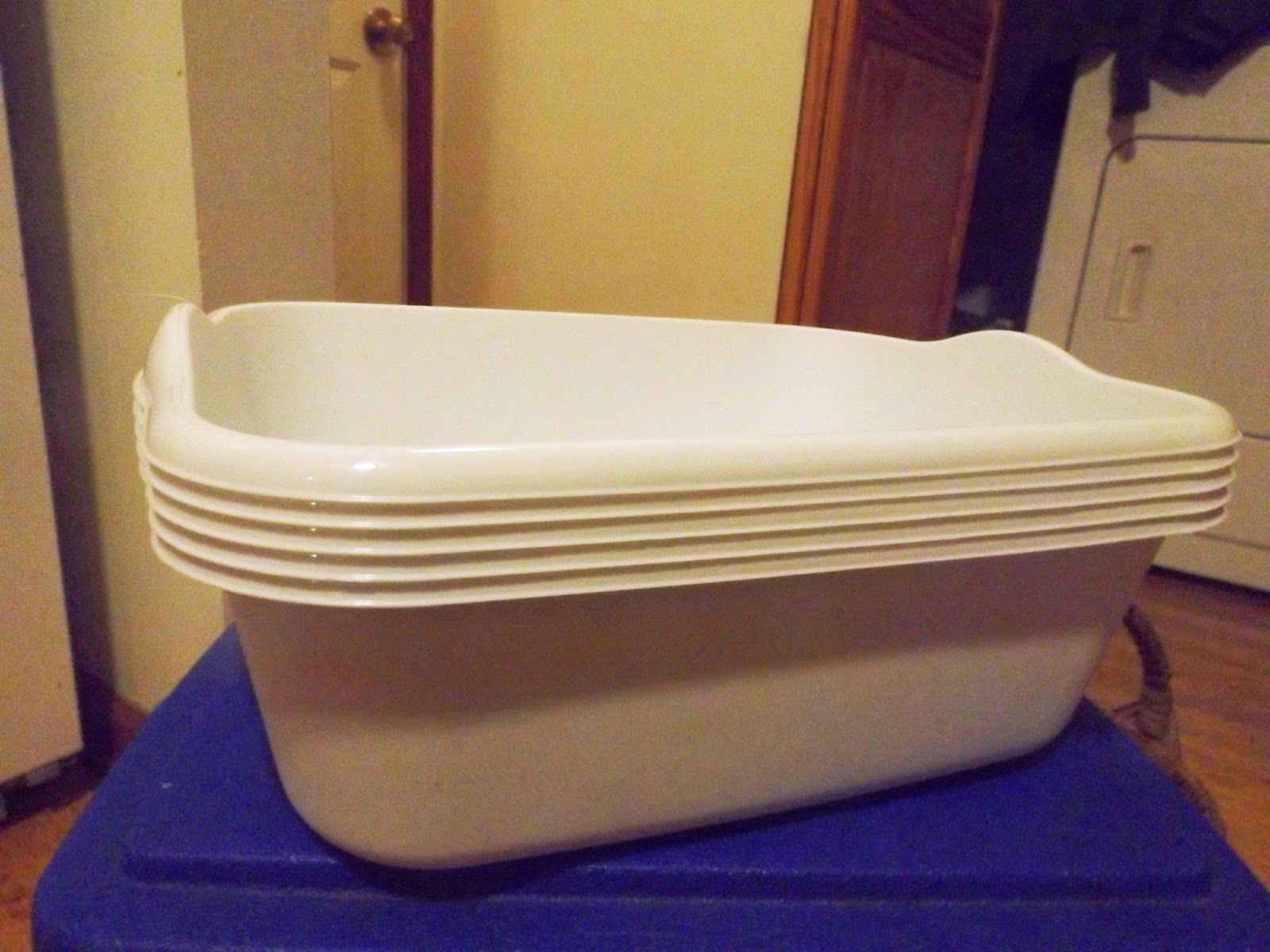 Besides, the little handles are kind of nice, and they're made of a sturdier, more flexible plastic than most Tupperware.

So here's what I did: 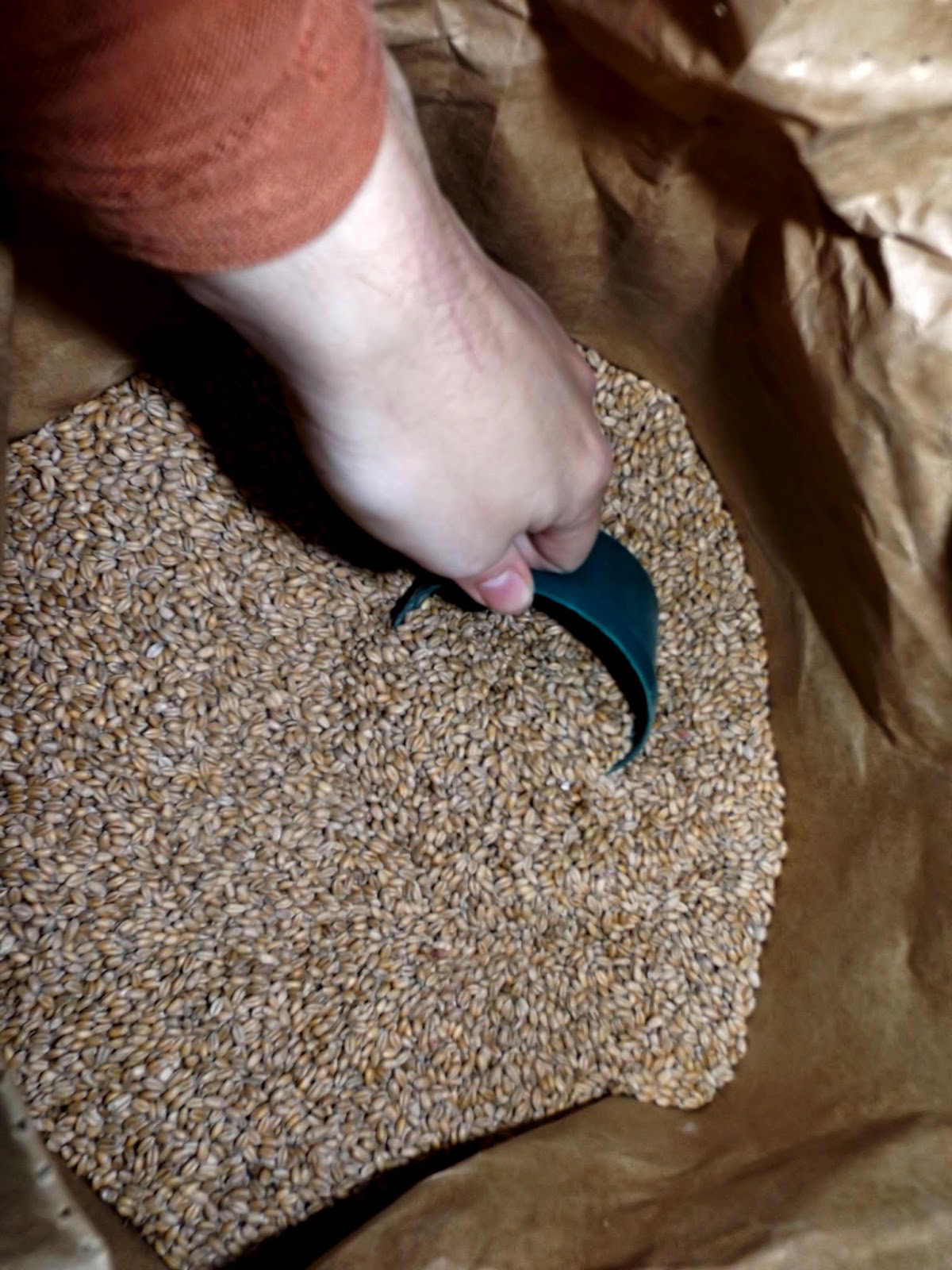 As you can see, wheat is much smaller and rounder than barley or oats.

You don't want your seed to be any deeper than a half inch in your trays. 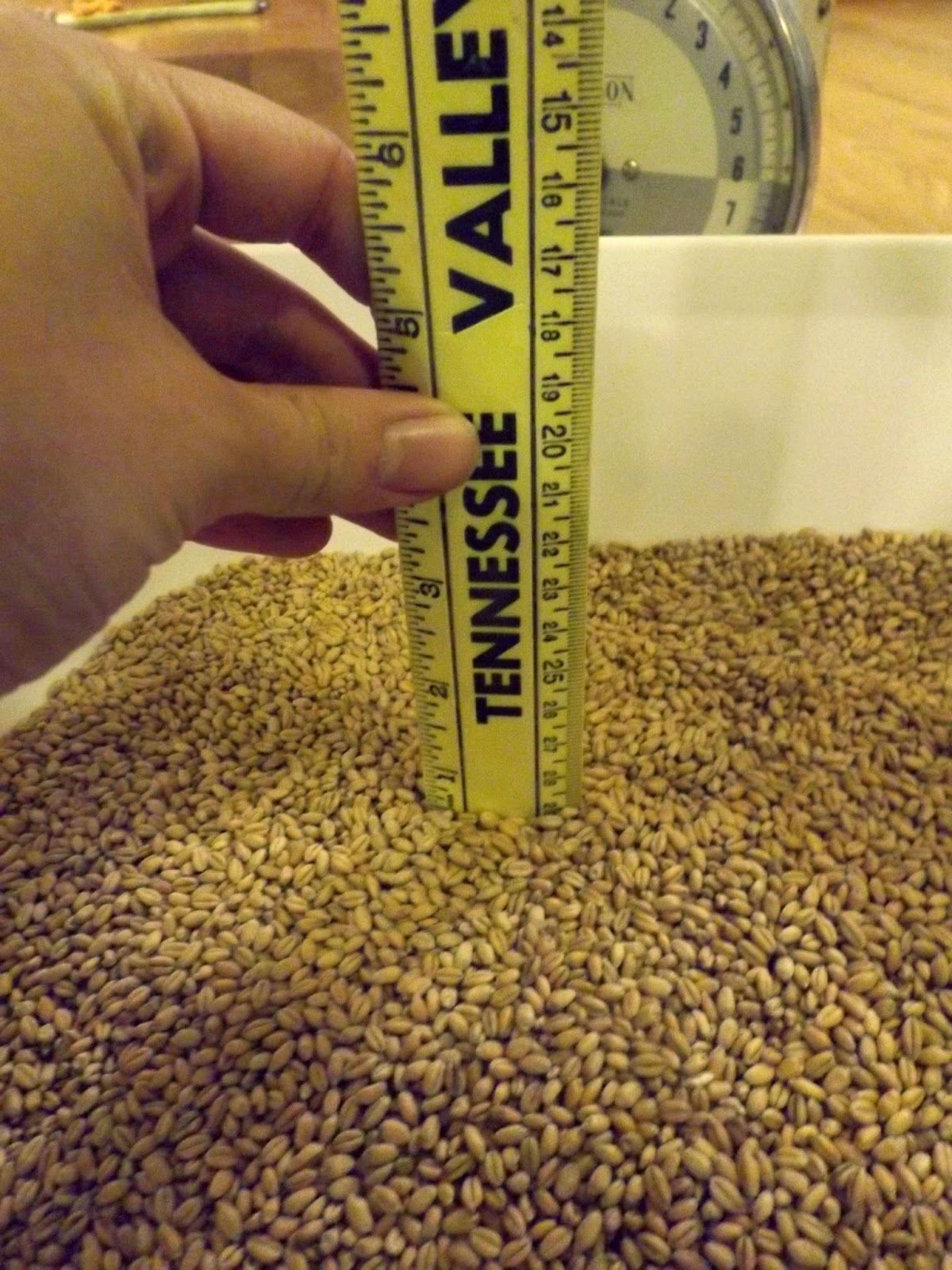 As it turned out, it took exactly 4 cups of wheat to fill the trays to the half inch mark.

Now you want to weigh it. 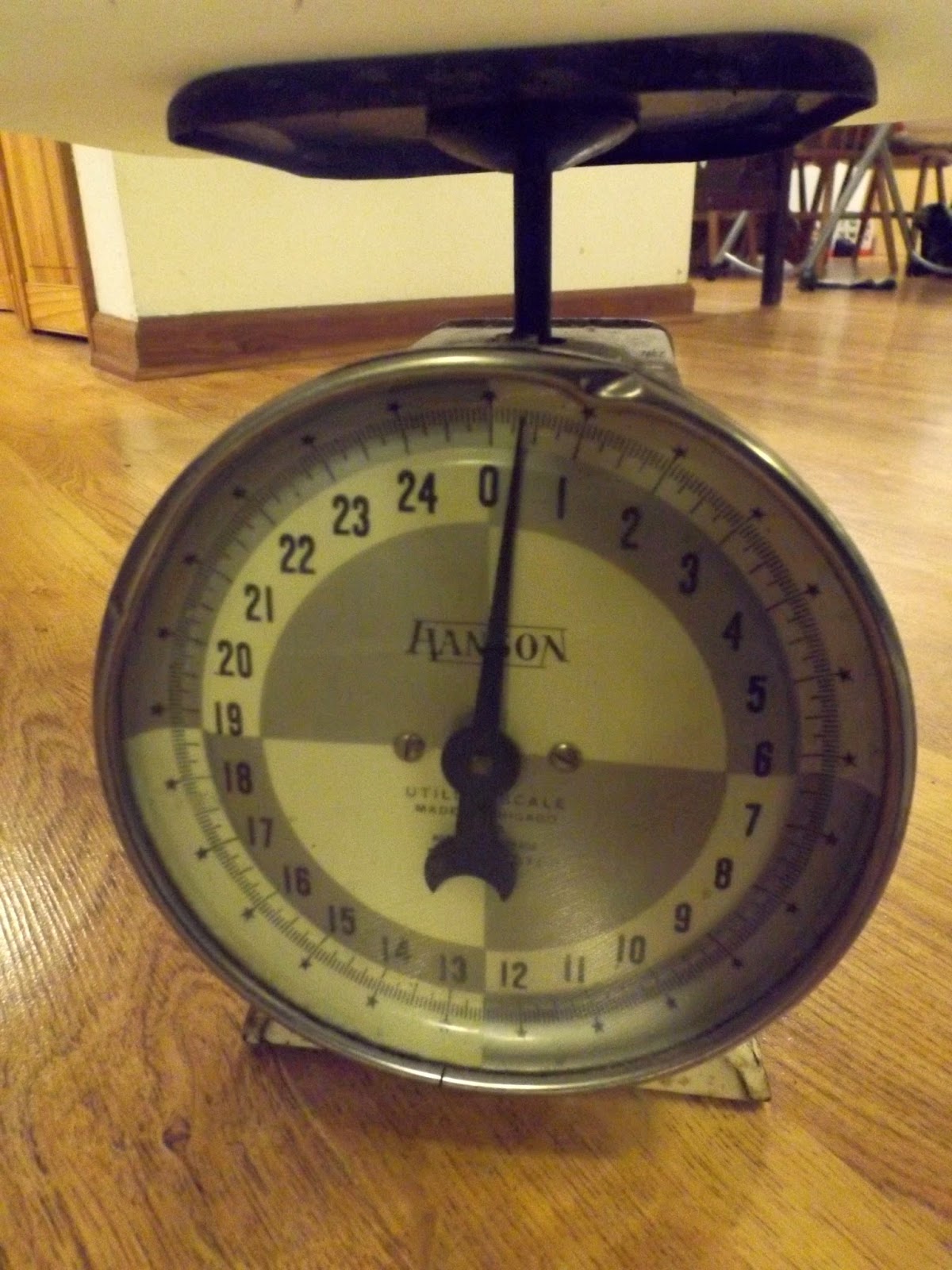 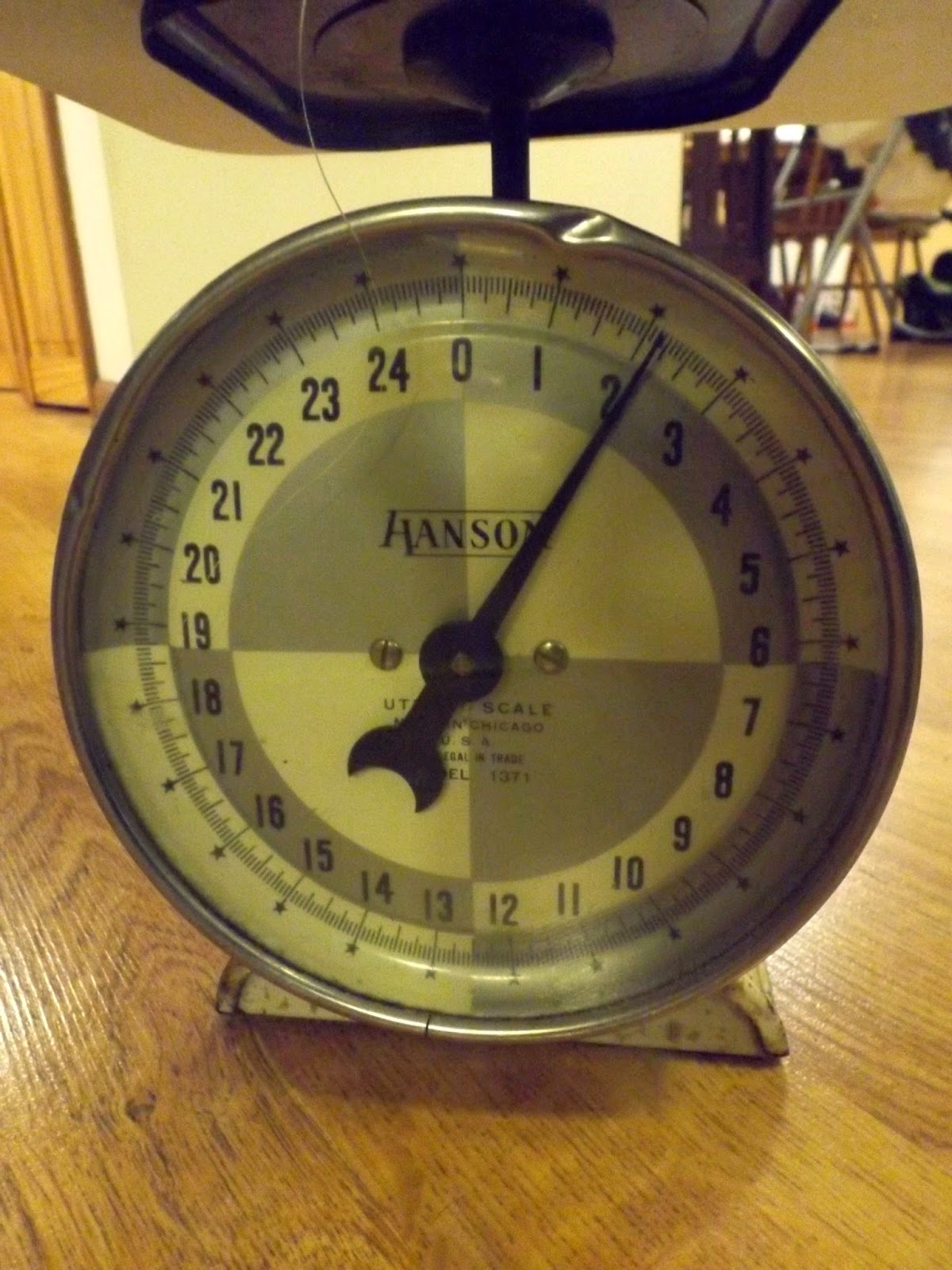 Now the grain. So it rounded out to 1.5 pounds dry grain per tray.

The trays won't work unless they have holes at one end to drain the rinse water.

First I tried burning holes with a heated wire (no soldering iron). I wasn't really enjoying the burning plastic fumes, so I switched to a drill.

Had to keep the holes pretty small so the wheat wouldn't fall through. 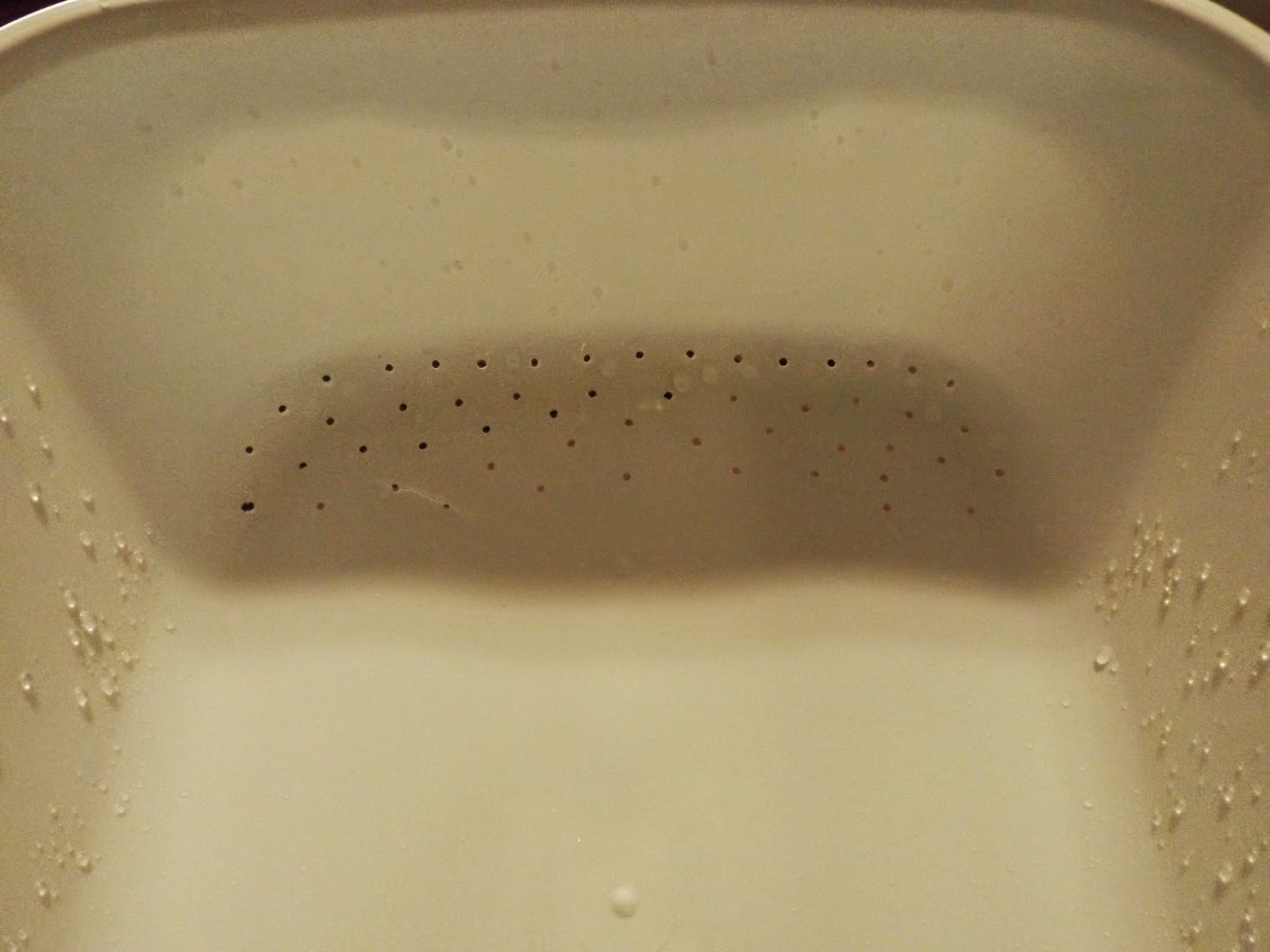 These holes, incidentally, were too small. I had to go back over them with a larger drill bit and then scrape away all the plastic shavings before the water would flow through freely.

I gave my 4 cups of wheat a good scrub and a rinse, and then left them to soak in the bucket overnight. 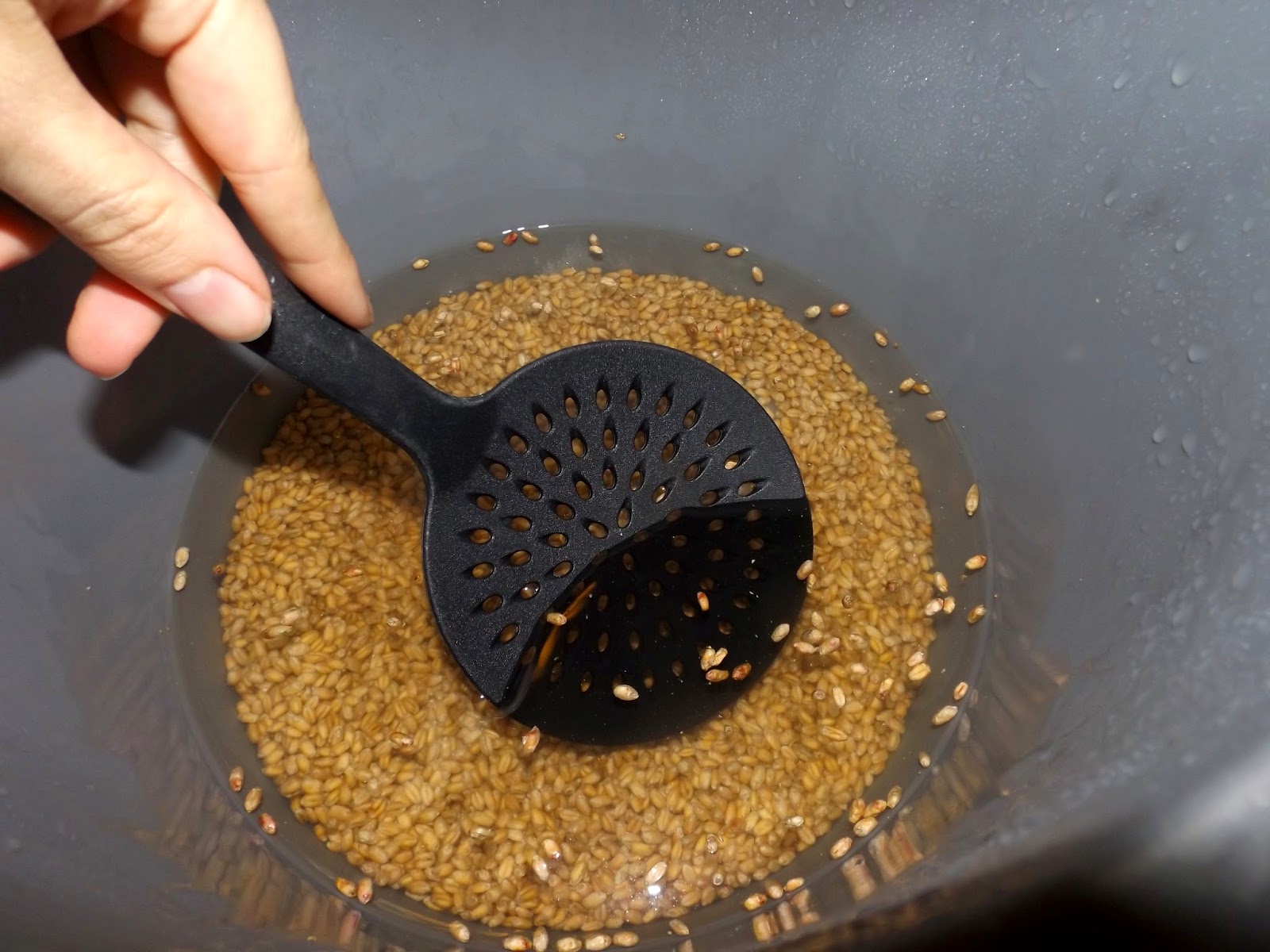 I skimmed away chaff and any floating seeds

It's best to use three parts water to one part grain.

The suggested soak times seem to very quite a bit. I've read everything from 8 hours to 24. Mine ended up soaking for about 16 hours.

I noticed the next morning that they were already showing signs of sprouting.

So I dumped the soaked wheat into the tray and then - GAH! I forgot to disinfect the tray first!

Hopefully it won't contaminate the wheat.

It's best to keep everything used for soaking and sprouting disinfected to help prevent mold.

I have 8 trays total, and will start a new tray every day to keep the cycle going.

I'm still in the experimenting phase, but so far it's looking good. 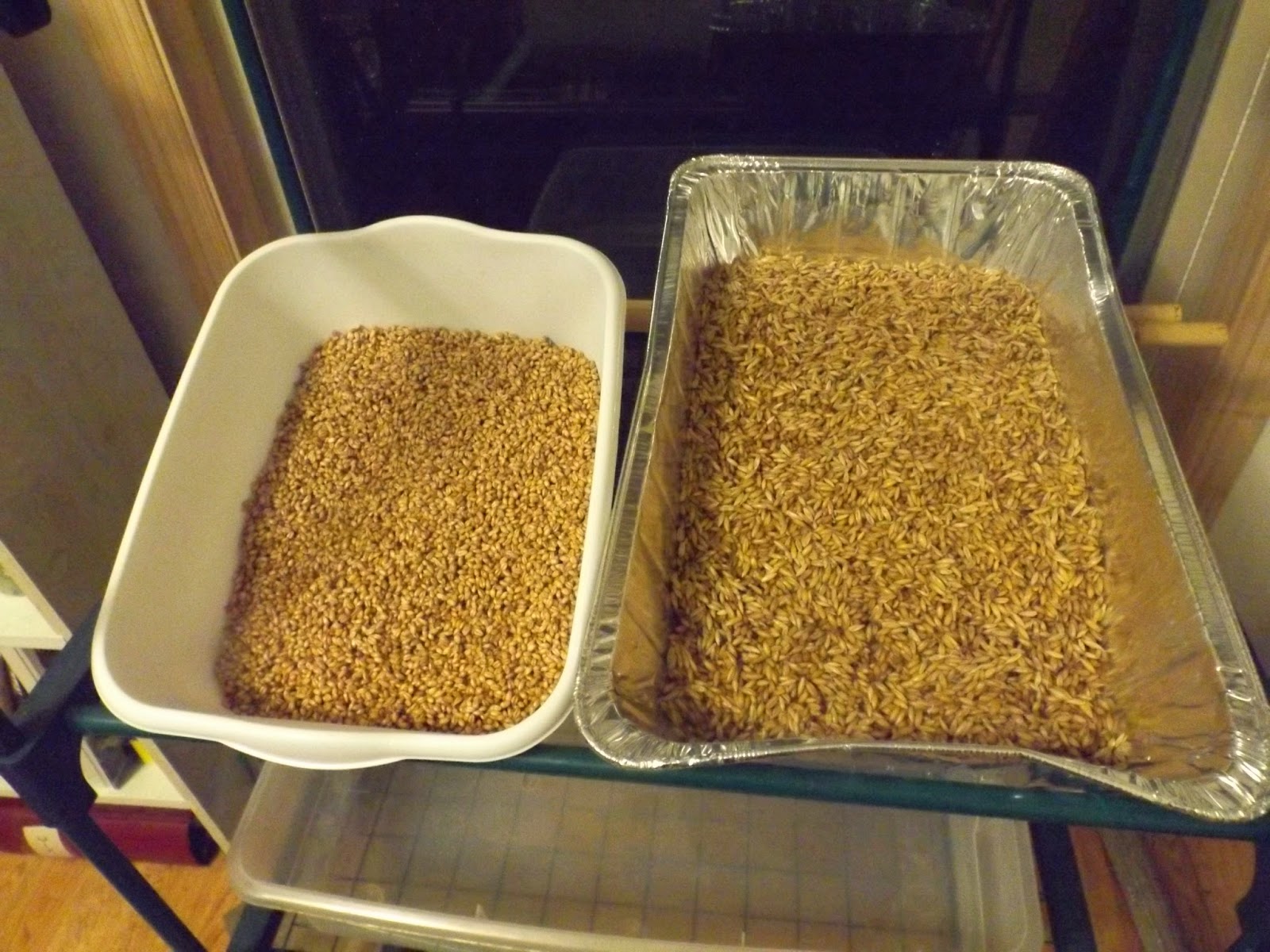 One the left is my first tray of wheat on day one. On the right is a tray of oats I am experimenting with. 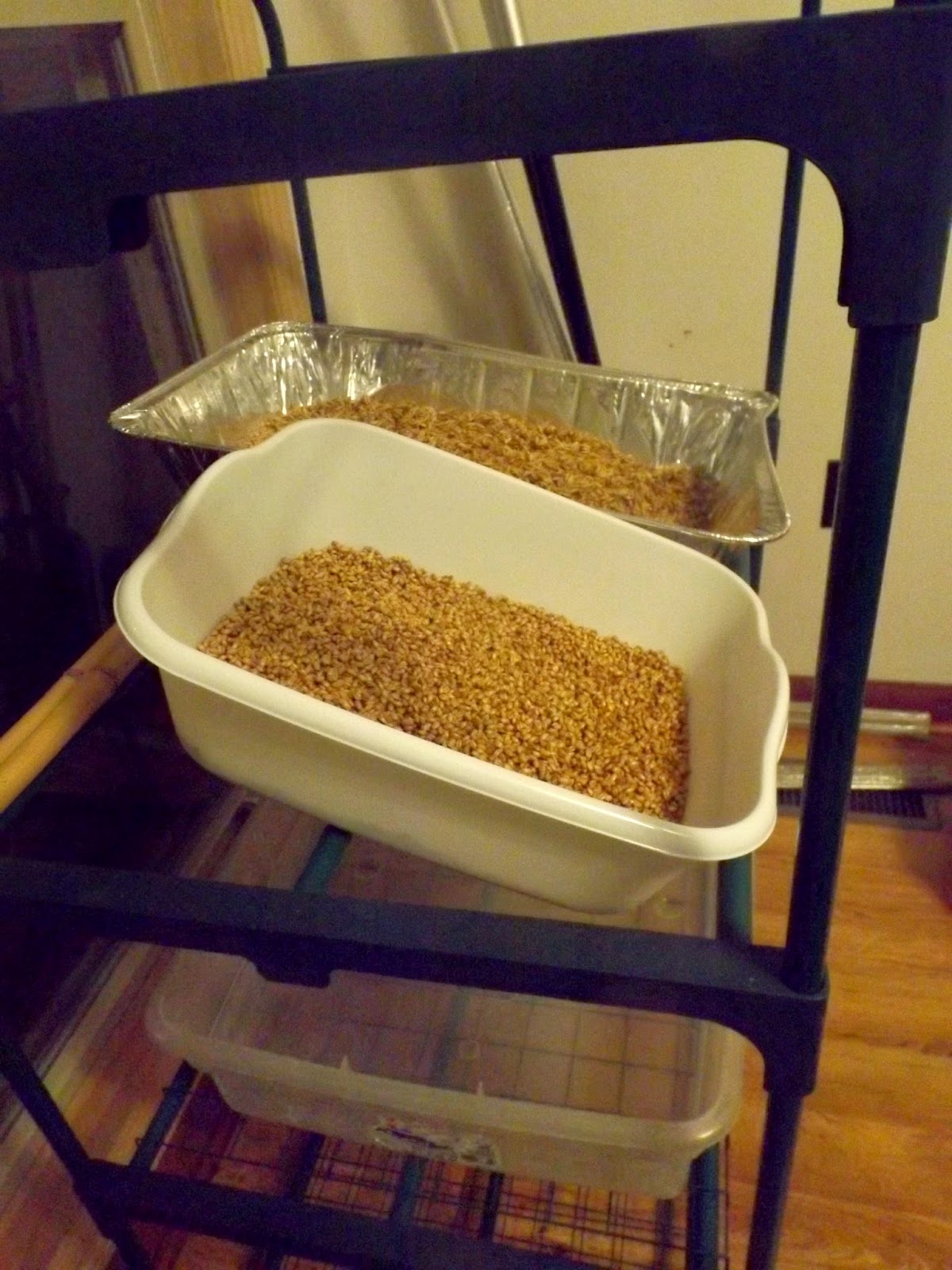 As you can see I've set the trays on a slant, with the drainage holes facing downwards. The tub below is to catch the rinse water. Twice a day rinsings seem to be sufficient.

It is recommended that rabbits be given 3-5% of their body weight in sprouted fodder each day.

I haven't actually weighed my rabbits, since I don't really have a scale good for that yet.

Sarah Cuthill at Fruhlingskabine Micro-farm made this handy-dandy chart for how much fodder each rabbit breed needs, relative to average body weight:

This is assuming that it is the same for both wheat and barley fodder.

I'm not sure yet how much fodder 1.5 pounds of wheat will yield, so it remains to be seen how many servings each tray will  grow.

I'll keep you updated on the progress of this project!