Pros and Cons of Deep Mulching with Hay All of us gardening homesteaders are always on the lookout for tips and tricks to maximize efficiency with the least amount of input.

Input = time, energy and resources that are always at a premium, with so many other things to do around the homestead.

Deep mulching with hay is a concept that's been floating around for awhile. It's nothing new, really.

But with a renewed interest in home gardens, it's had a bit of a revival.

I first ran across the concept on The Prairie Homestead, and I decided I would give it a try. As a new mom, with less time to spend weeding and watering, it really appealed to me.

We tilled up our garden space this spring and applied a thick layer of grass hay, since that's what I had on hand. Theoretically, once you apply your mulch you should never have to till again.

Tilling, albeit necessary to plant things, is actually pretty destructive to the soil. It exposes all those delicate microorganisms to the elements, destroying many of them. Those critters are essential to the health of your soil, and the plants you put in it.

Disturbing the soil also brings up weed seeds which gives them a chance to grow, adding even more work.

So after a season experimenting with hay mulch, here are a few things I've discovered.......... 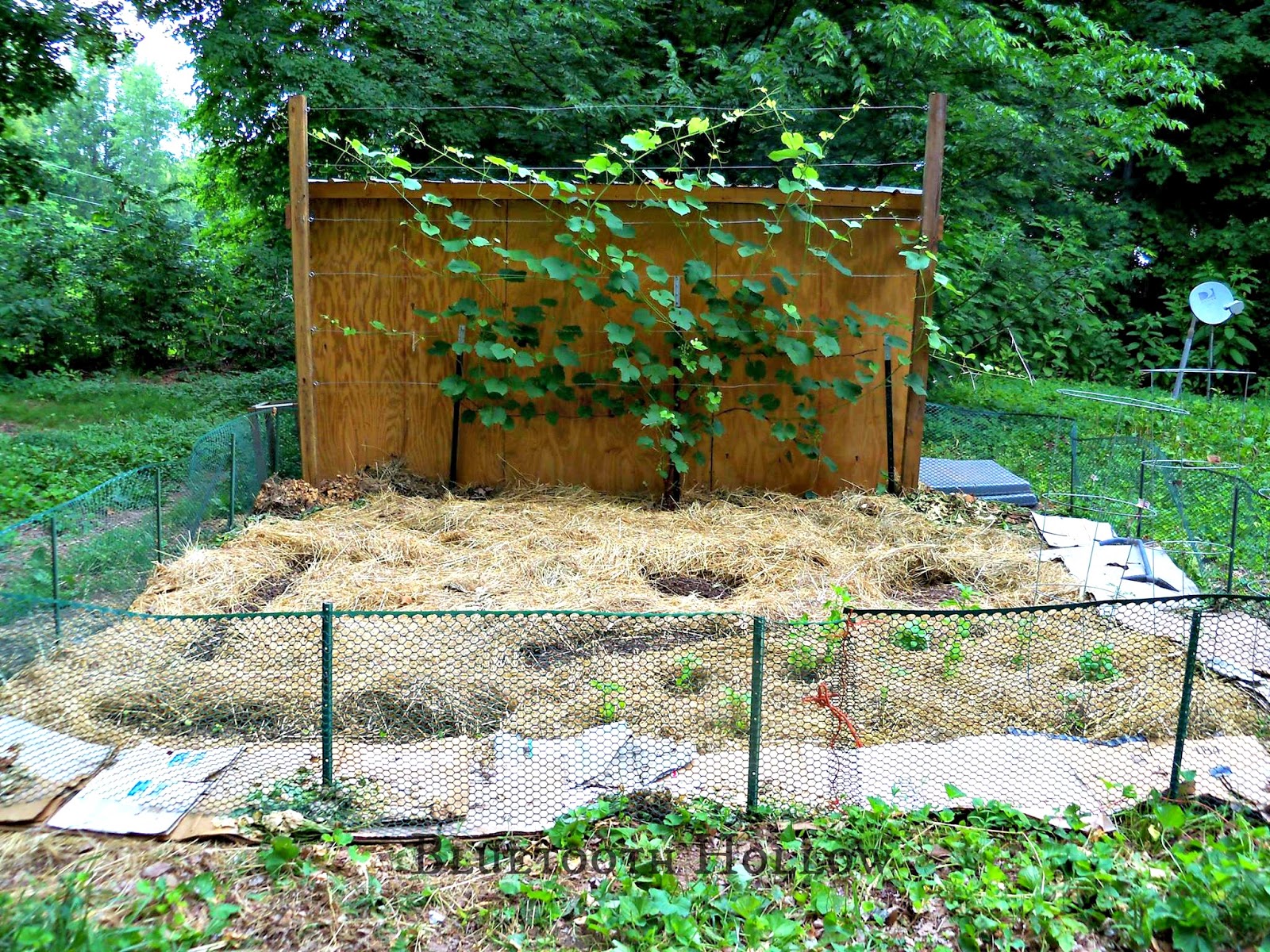 Now, when we spread our hay mulch right after tilling (I know, there always has to be a story), there was a storm fast approaching, and we had a little 6 month old out there with us.

My plan was to rake through it really well to remove upturned weeds and rocks.

We did well to get the hay spread before the storm hit.

In other words, I spent a lot of time fighting those weeds (mostly violets). With their roots in tact they were able to push through the thick layer of hay. If it weren't for them, weeding would have been minimal.

All the covered soil remained weed free. There were a few spots of hay seeds that sprouted, but they were easy to yank up and throw back down (a spading fork works well for this).

KEEPS WATERING AT A MINIMUM

This may not have been the best summer to test this theory, since it was unusually wet and mild like the previous year, but we did have at least two weeks of really hot and dry weather.

I still watered my plants daily for a week after I planted them; and then intermittently the rest of the month, just to help them get established. But that was ALL. Afterwards I didn't have to water them ONCE.

Even if some of the plants looked a little stressed at midday, they would perk right up later on.

I never once saw the soil look hard, dry and cracked like it usually gets in mid-summer.

There were days when I would go out to check to see if they needed water and was surprised to see the exposed soil was still dark and moist. 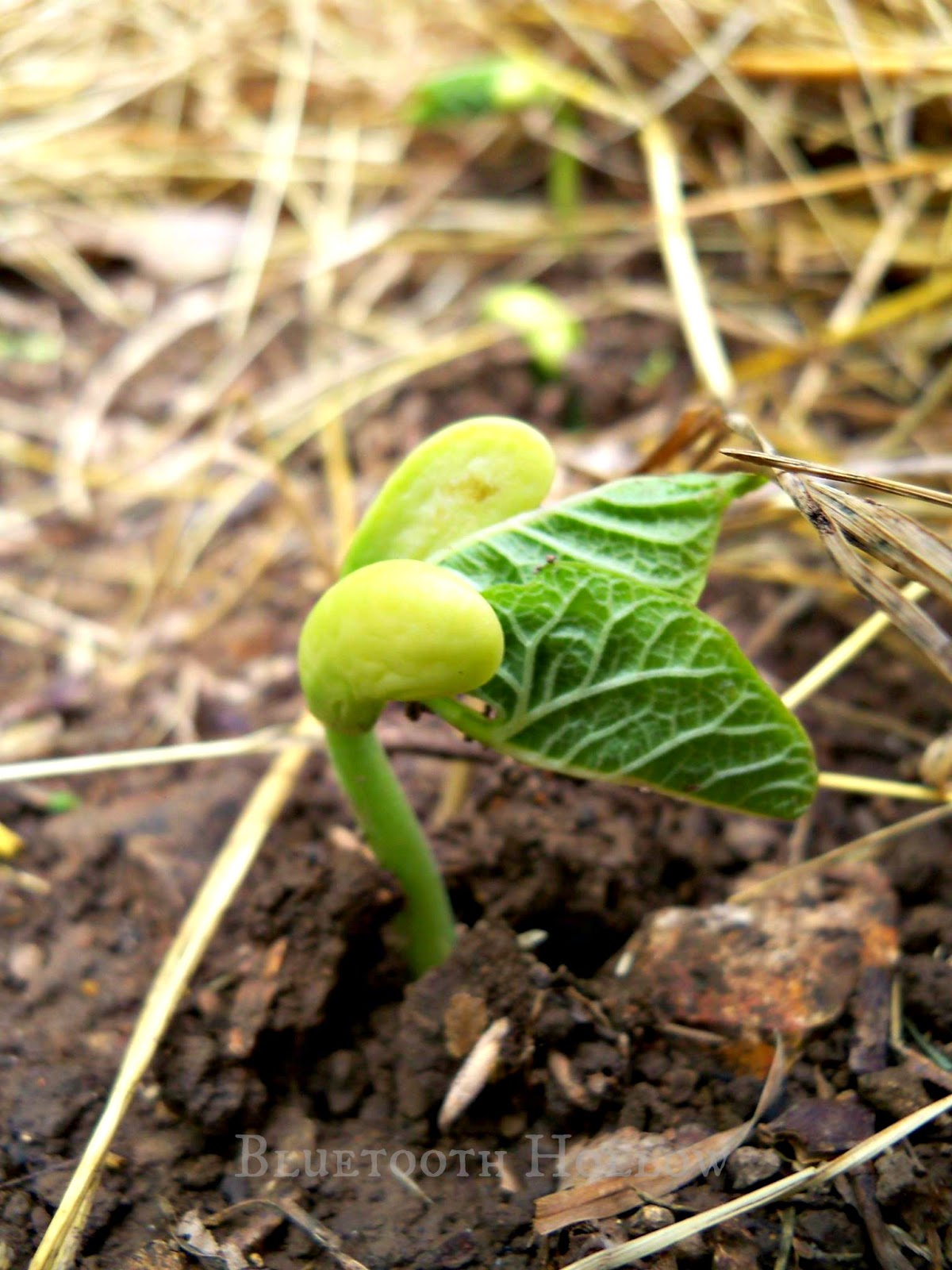 I've heard of homesteaders in drier climates having great success at conserving moisture with hay mulch.

NOURISHES AND PROTECTS THE SOIL

In nature, prolonged exposed soil is not a natural state. Any disturbed soil quickly becomes colonized with germinating weed seeds, beginning a succession of plant habitats which ultimately result in a forest (or whatever the native habitat is for that ecosystem).

With the natural cycle of plants dying and trees shedding their leaves, organic matter is continuously being returned to the soil. In a way, hay mulch mimics this process.

The thick layer of hay helps protect the delicate soil structure, allowing it to develop naturally.

Over time the hay mulch will break down, returning carbon and organic matter into the soil.

This is great for your plants!

NOT GOOD FOR ALLERGIES

This may go without saying, but if you're allergic to hay or sensitive to mold, you may need to wear a respirator whenever you're working in the garden.

Once hay is exposed to any amount of moisture, it becomes an ideal breeding ground for mold. This is why hay for livestock has got to be kept impeccably dry and well aerated.

You will have to rake back the hay from time to time to plant seeds. I noticed big clouds of mold spores anytime I disturbed the hay. I'm not terribly sensitive, but would cough and sneeze from time to time. (This is probably more of a problem in humid climates.)

While the hay is good for beneficial organisms, it is also very attractive to unwanted ones.

Garden enemies like squash bugs and potato beetles LOVE them some cozy hay to hide in. If you already have trouble with these pests, you may need to re-think deep mulch, as this will create a LOT more work for you in regards to pest removal.

A layer of hay is also very attractive to rodent pests who will burrow throughout. Snakes will follow and help remedy this problem, but if you are petrified of critters of the serpentine race you may need to re-consider.

We don't have gophers in this neck of the woods, so I'm not sure how the hay would affect their impact on the garden.

If you adore soil so loose and fluffy you could blow it away, you may not like deep mulch hay.

Looking again at nature, loose soil is not a stable environment. This would quickly wash away with the rains or be whisked away by the wind. Soil is held in place by networks of plant roots which help provide structure and stability. Worms and other microorganisms tunnel through the soil, providing fertilizer and aeration.

Because you aren't going to be tilling regularly when using hay mulch, the soil will compact down more than you may like. This necessitates using minor cultivation anytime you need to plant something.

Of course, this may also depend on your soil type.

Here in middle Tennessee, clay comprises a large part of our soil. Though fertile, it tends to compact easily.

I think this isn't such a big deal, since it's easier to cultivate by hand here and there than it is to drag out the big gas tiller and turn the whole garden under.

So there you have it.

My analysis of deep hay mulch.

Overall I am pleased with the results, and will continue to use this method for now. Have you tried the deep mulch method with hay?