Late Nights Kill Mornings - And Tomato Trials in the Kitchen 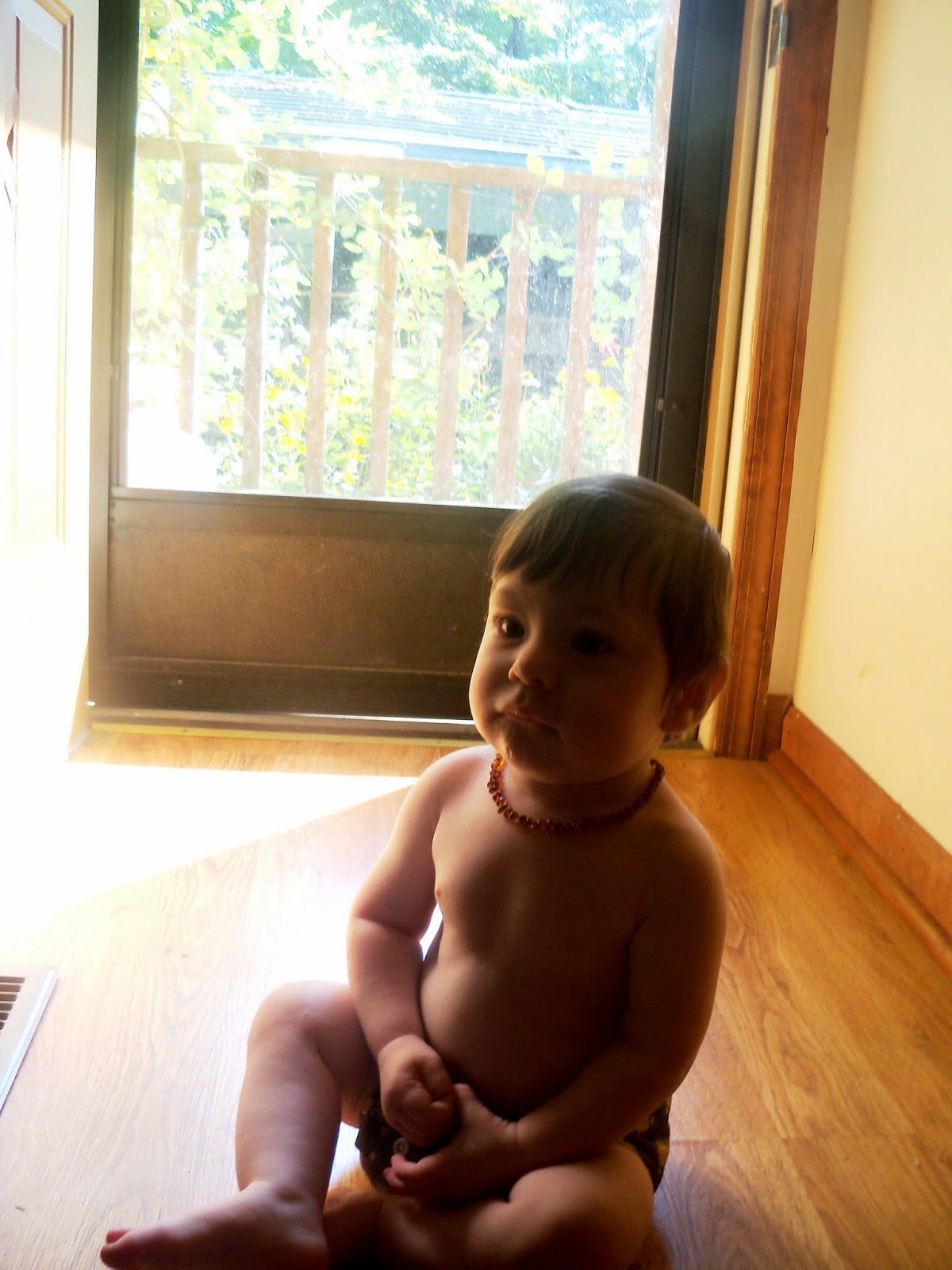 Our busy little man has been really fighting bedtime, these days. Part of the problem is that he refuses to nap until he is just EXHAUSTED, then crashes at around 6 PM. I start trying to get him to bed as early as 9:30, but it's been taking two hours to get him down. Then, it doesn't matter how late it is, once the baby is down for the night, I have a renewed energy and desire to get stuff done. So it ends up being after midnight by the time I get my hind end in bed.

Inevitably, we all end up sleeping later in the morning; and since the baby has been waking up multiple times throughout the night (teething pain I'm sure), I am exhausted in the mornings. If Mark has the morning off, I simply cannot resist the opportunity for an extra hour or two sleep, if he can take Ian for me.

Unfortunately, this sets the tone for the rest of the day, in regards to productivity.

Not very productive, in other words.

I did however, manage to do something with that mountain of plum tomatoes from mom's garden.... 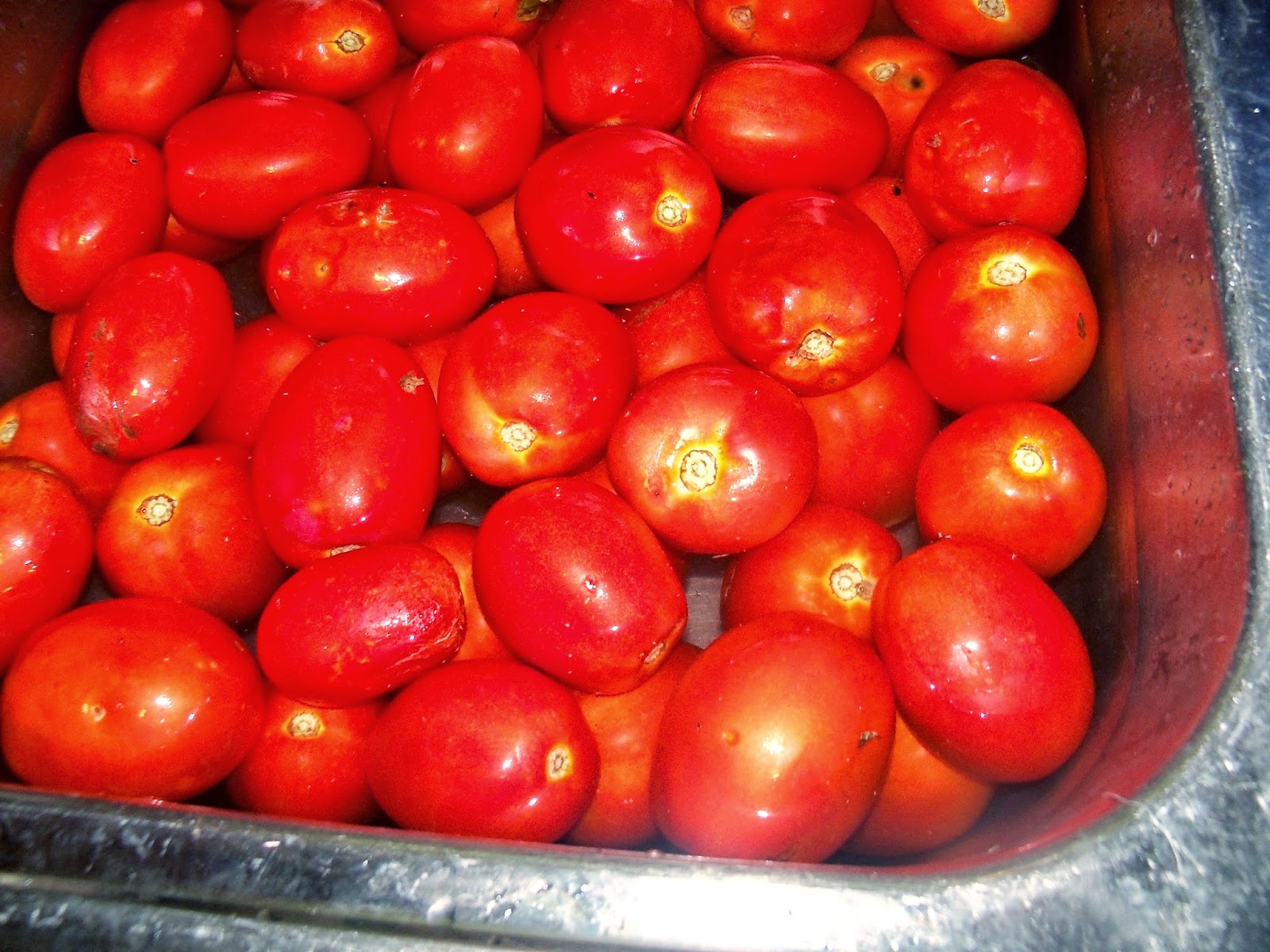 (By the way, some of the pictures on this post are from none other than the latest pavement fatality... 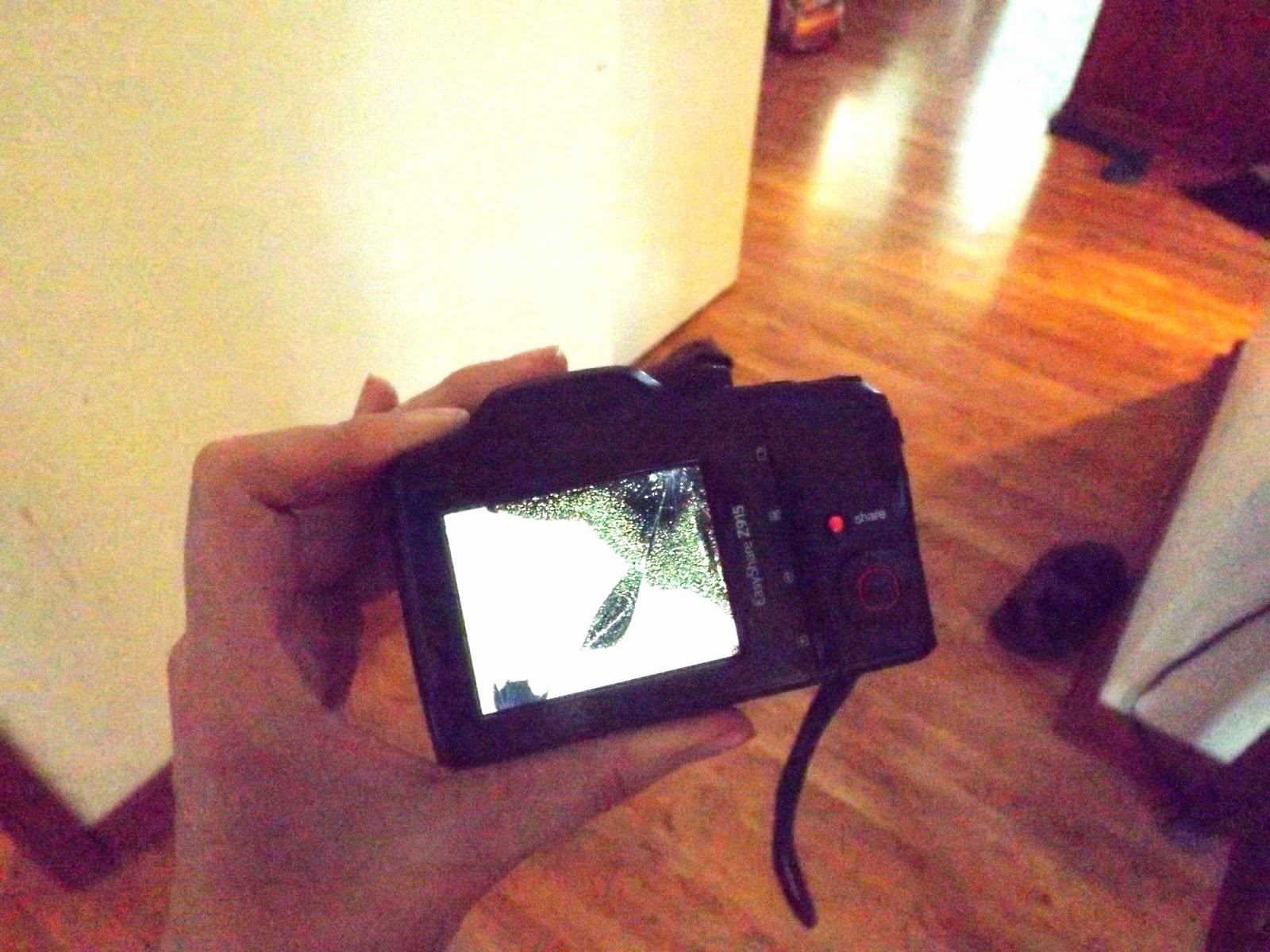 As it turns out, the camera itself works fine. I just can't see what the hell I'm doing! Haha!

I tried a few different methods of freezer prep, since I've not really ventured into the world of canning as of yet.

First I tried slow roasting in the oven with garlic and olive oil. The photo in the book made it look so enticing....... and how delicious would that be for sauces in winter?! 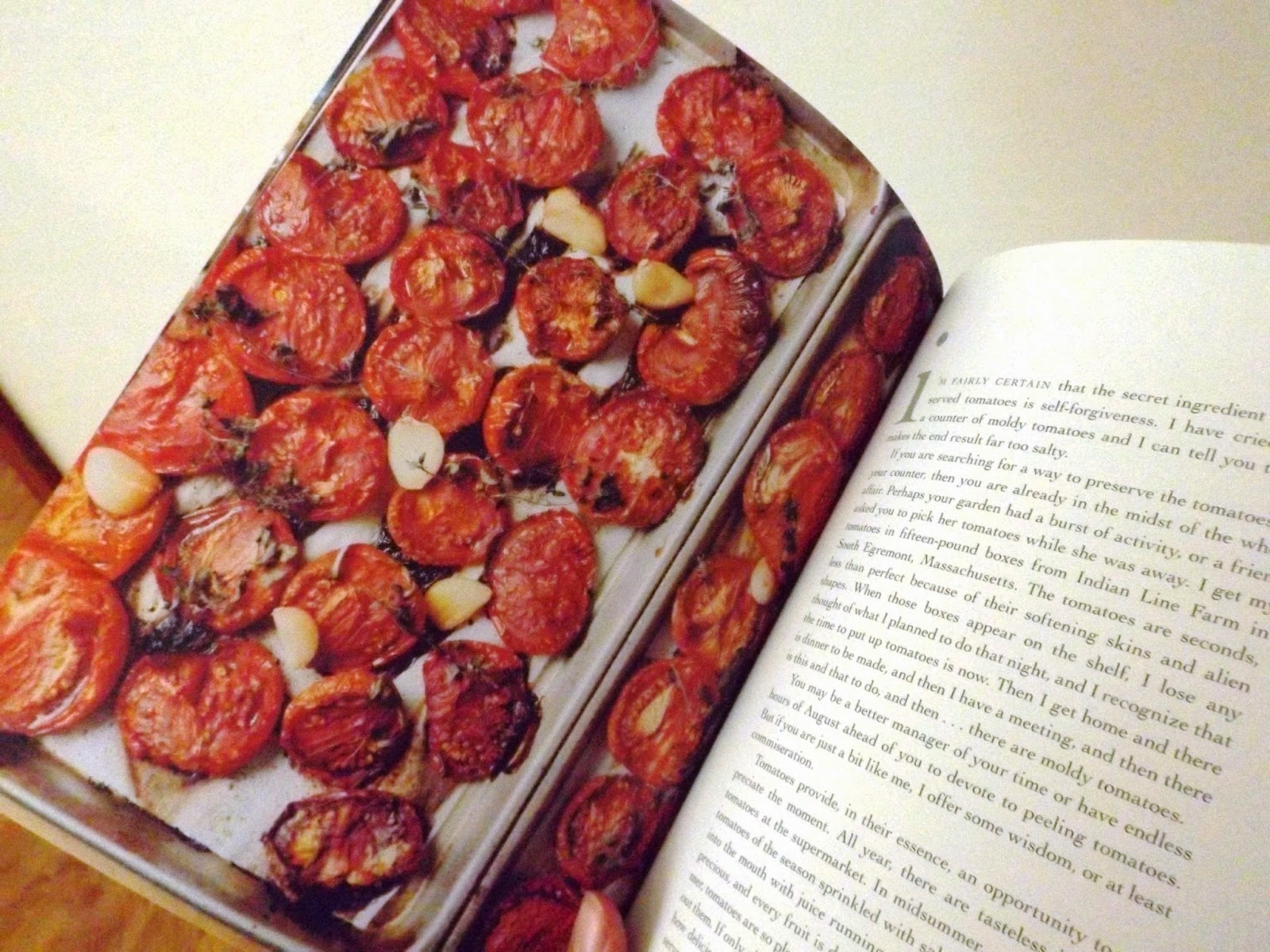 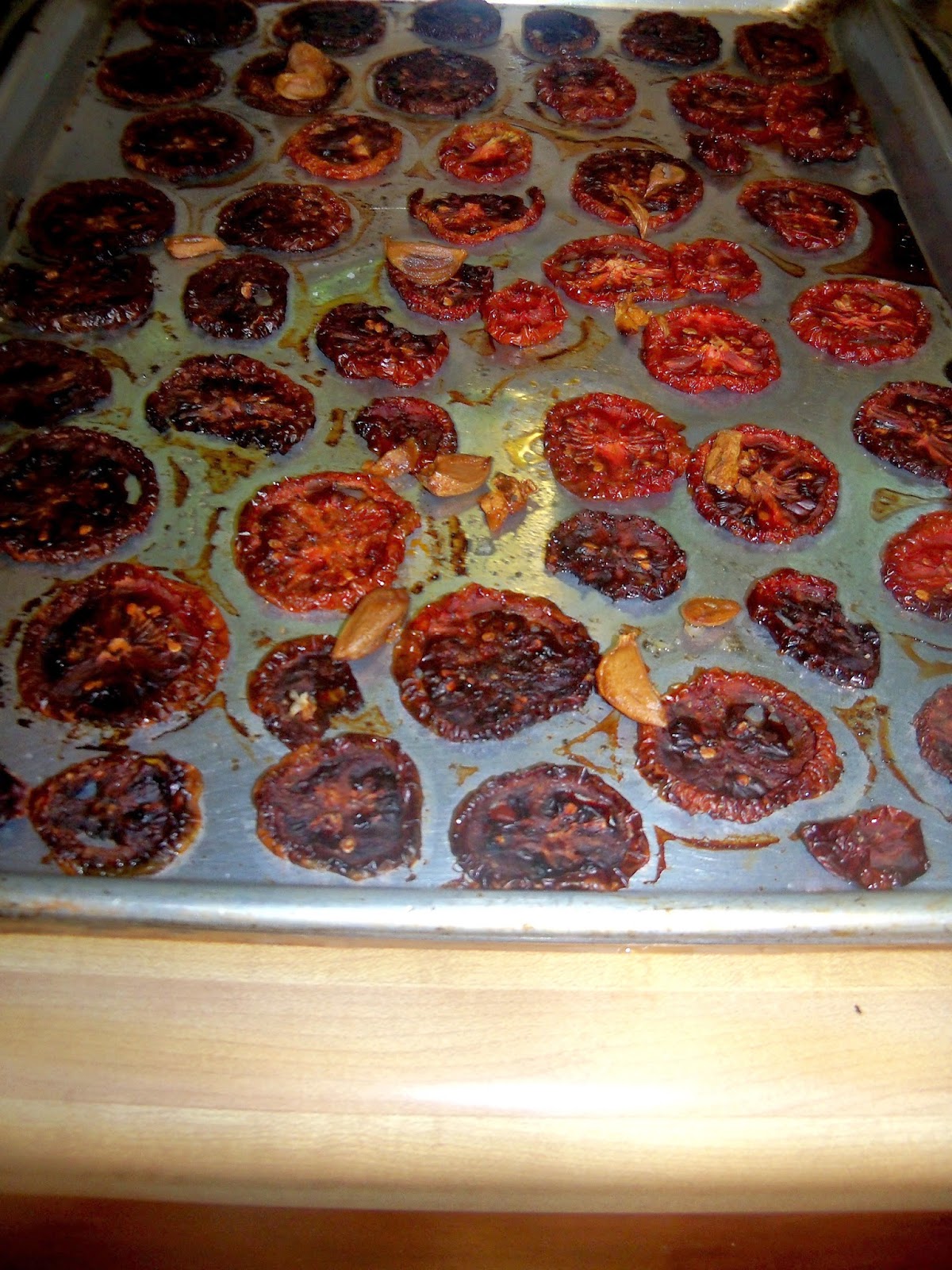 ... yeah, not so much. The recipe recommended 5 hours at 275. This was after 4.  Granted, I should have been keeping a closer eye on things, but Ian gets overwhelmingly clingy anytime I attempt ANYTHING in the kitchen. This makes things *stressful*, to say the least. (By the way, they didn't all go to waste; the few non-charred ones got tossed in the sauce, and the rest to the dogs.)

Simultaneously I was working on blanching, peeling & squeezing another batch.

Once I started, I realized that we had not made it home with the ice cube trays we just bought. So the only thing I had to make a cold water bath for the hot tomatoes were a few cold packs from the freezer. Not very successful.

I still got 2 quarts of tomato flesh and one quart of tomato juice from the process, but not without a lot of swearing and a crying baby clinging to my leg (or getting into things or disappearing into other rooms, etc.).

I kept thinking to myself, how on earth did the women in the days of yore get this crap done ALL DAY?! I guess they had enough kids to keep each other busy. Or more family members to help out, perhaps.

The following day, I had the second half of the tomato pile to do something with. This time I decided to just cook them down in to tomato sauce. I used 4 onions, 6 cloves of garlic, dried oregano, butter, olive oil, Worcestershire, balsamic vinegar and a touch of brown sugar, with added salt and pepper. 10 pounds of chopped tomatoes made about a gallon of sauce. It would have been better without the seeds, but removing them would have been too labor intensive. 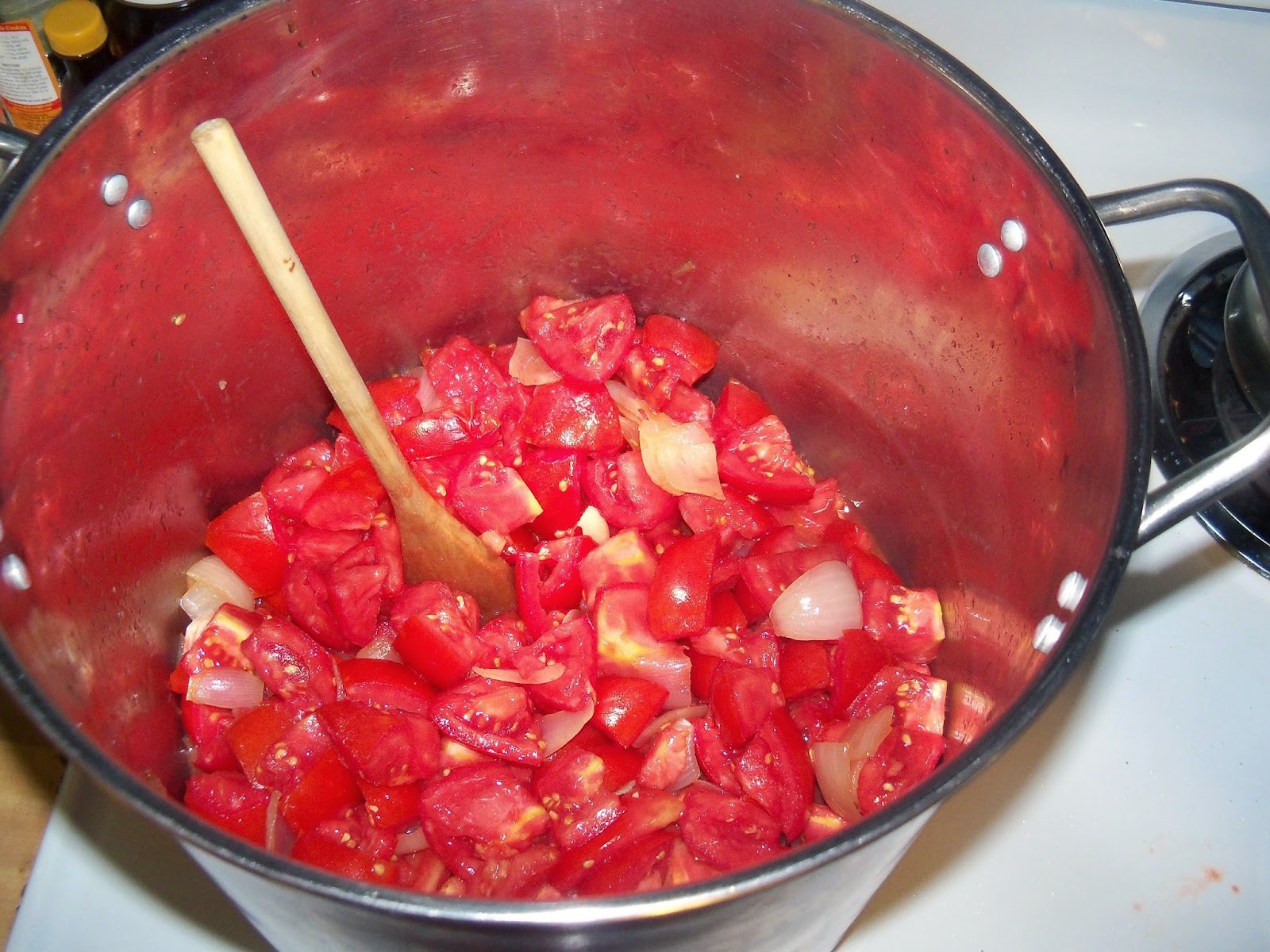 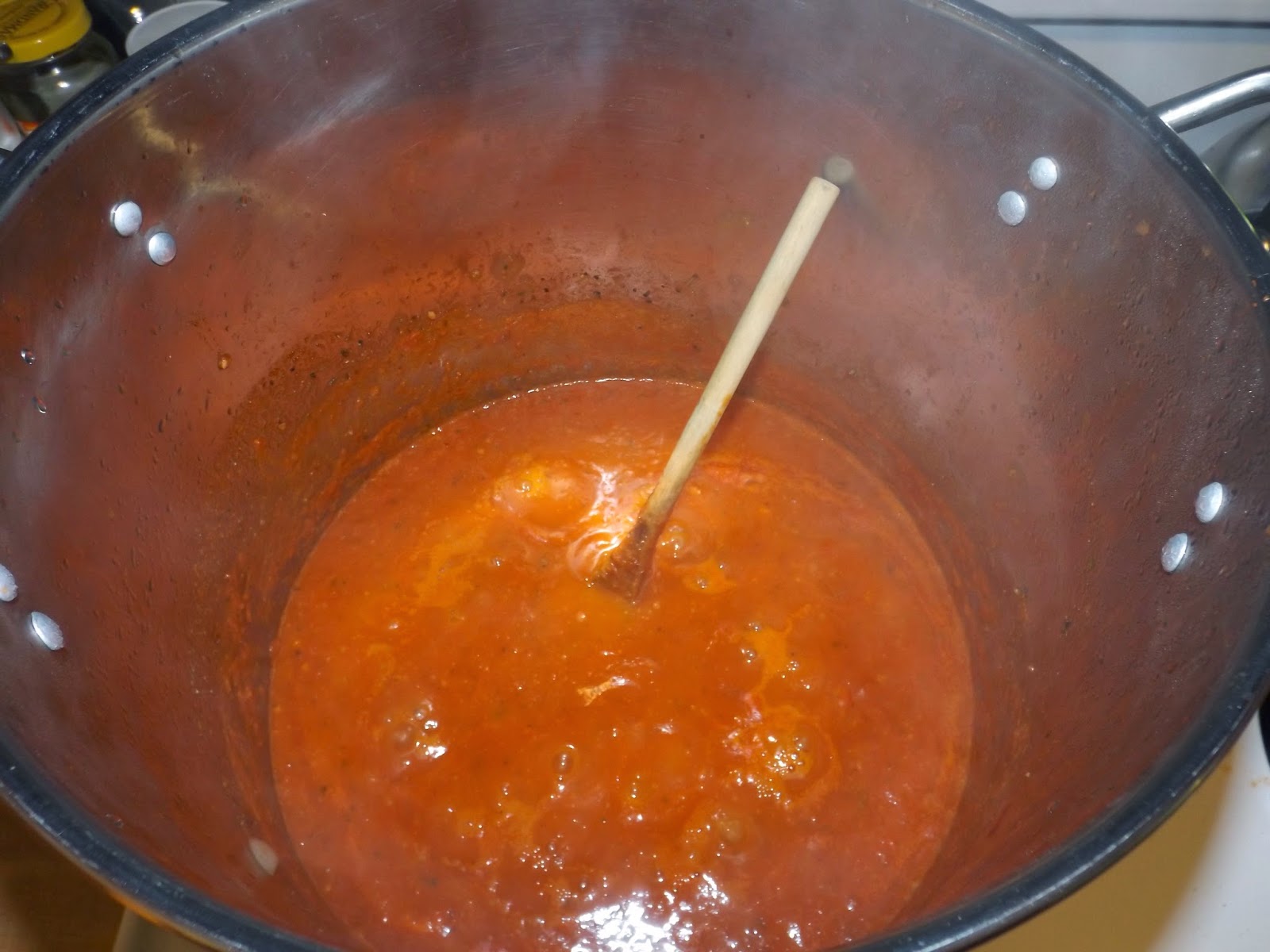 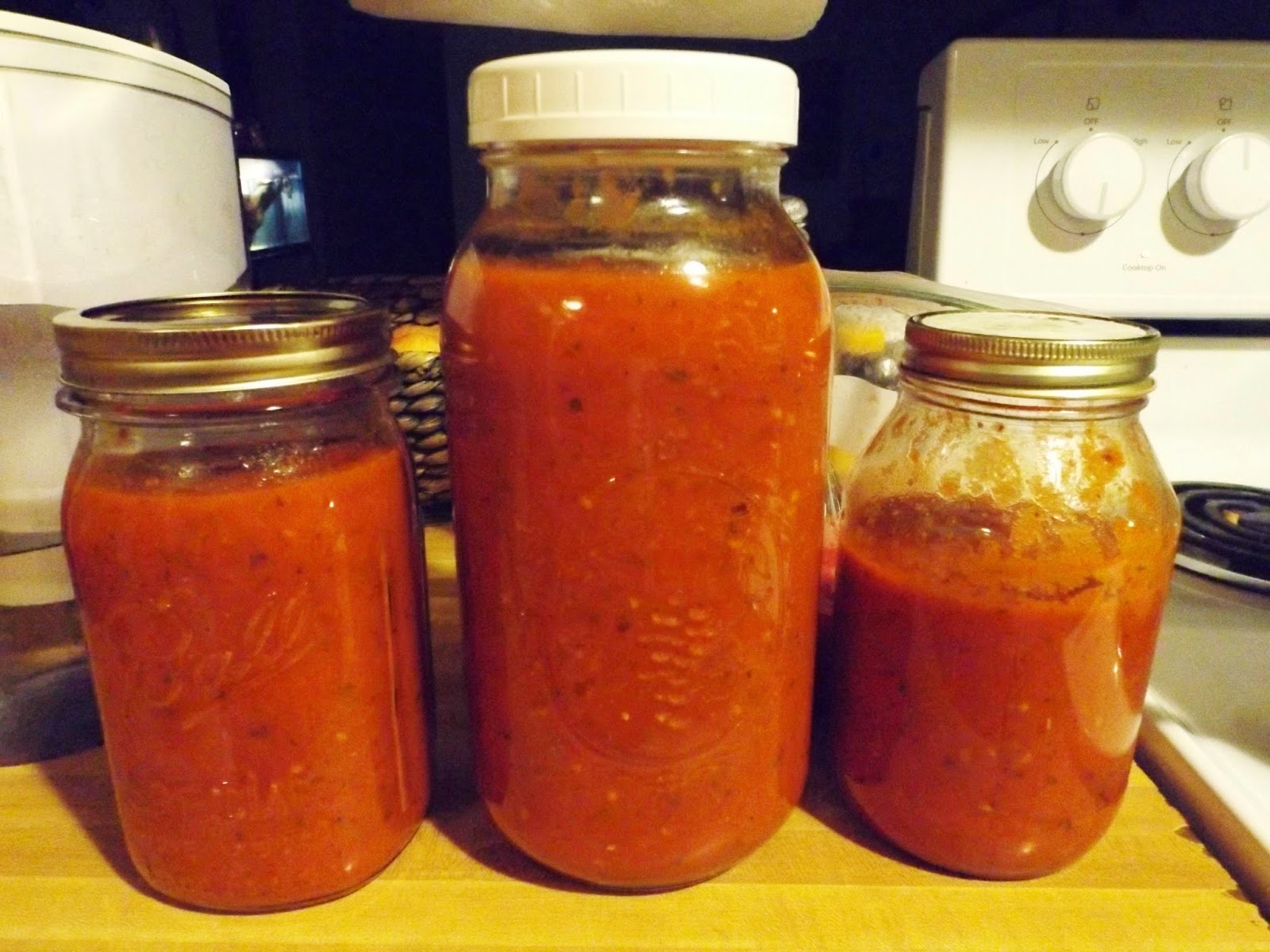 At least those beautiful tomatoes didn't go to waste.

I also managed to grate up 4 cups of zucchini to freeze last week.

I had all these aspirations of preserving mountains of produce to fill a sparkling larder, but I don't feel like I've accomplished much.

But I suppose a little is better than none. Especially considering accomplishing a daily shower is much celebrated, of late.

Now to do something with this small pile of yellow squash. And - OH GOD! My tomato pile is growing again! Help! 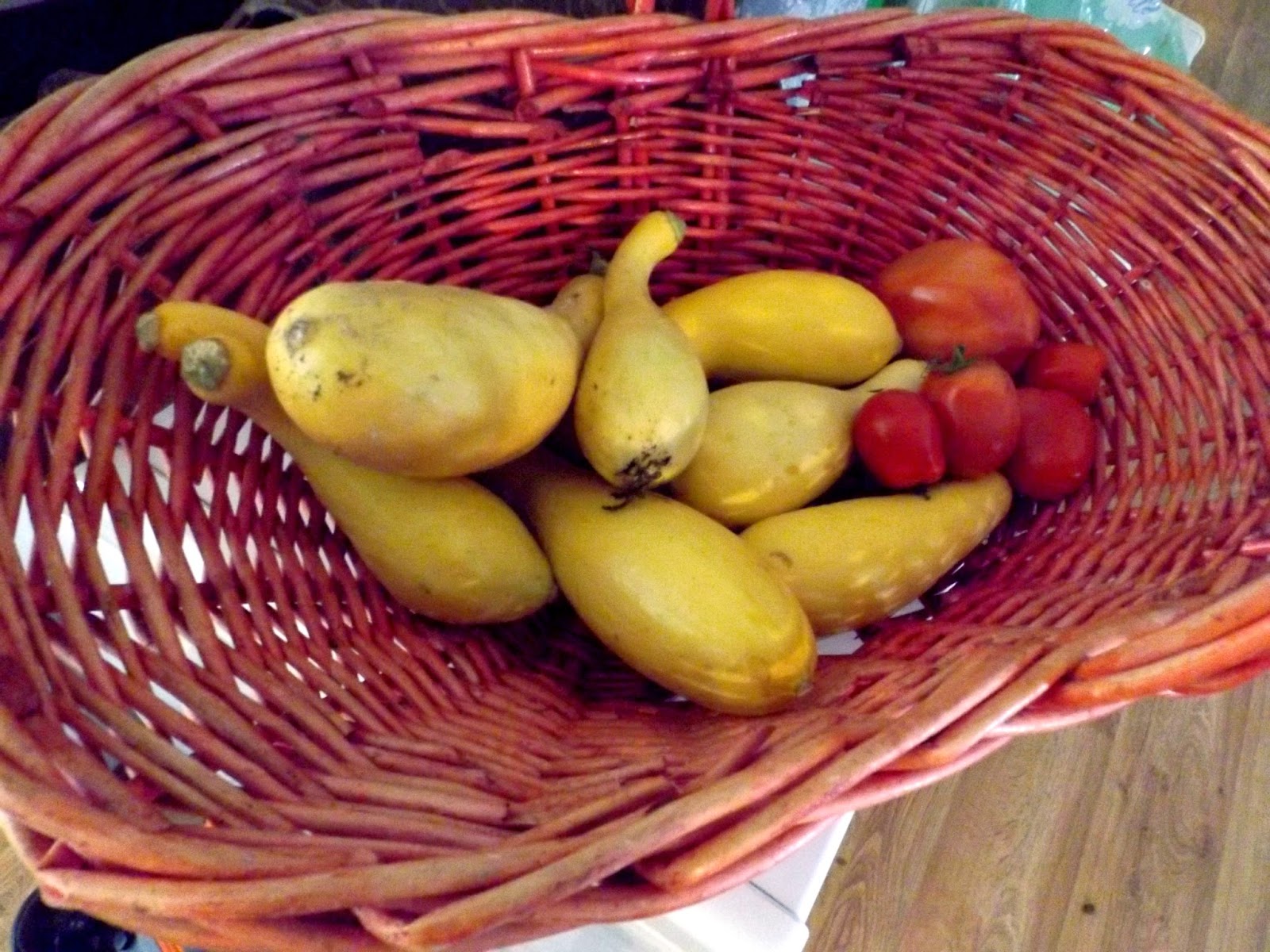 I got tired of picking beans, so I decided to let the rest dry on the plants. Hurray for dual-purpose beans!

Here is a glimpse of our first Painted Pony bean: 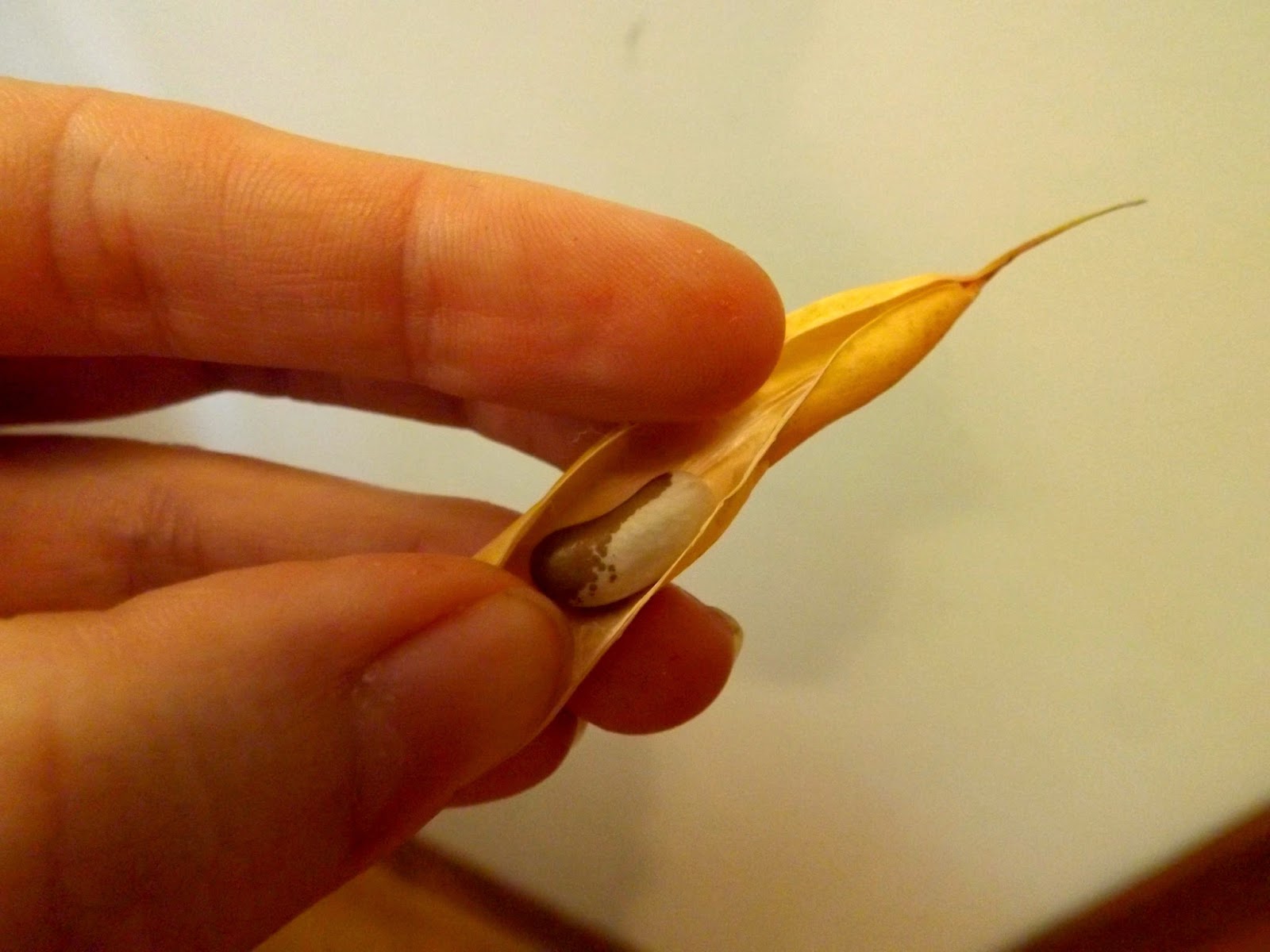 How cool is that?!


In three short weeks we'll be leaving for our annual vacation in the Gulf. While I am eagerly anticipating white sandy beaches, fresh seafood and casting a line into the surf; I'm looking ahead to our long drive with a 10 month-old with much trepidation. How could it possibly be a pleasant ride? That question is rhetorical, by the way. The short answer: it won't be. No. Freaking. Way.

But as always, I'm trying to focus on the positive.


A tiny update on the house:

We are at the negotiating stage, currently. This is taking a lot of patience and restraint, on our part; not to mention all the long discussions and crunching numbers. Buying a house is no small task. Nor is it a simple one. It's a great learning experience though.

Not to say that learning experiences equate to rollicking good time.

I'll report more on that subject when there is more to report.