What's Brewing at Our House?

A new organism has taken up residence at the Taylor house.

It’s pretty quiet. Doesn’t need daily petting or attention. Exercise is unnecessary, and there’s no waste matter to deal with. It just floats in its jar, uncomplaining, while fermenting tea and sugar into a healthful beverage rich in probiotics and detoxification properties. 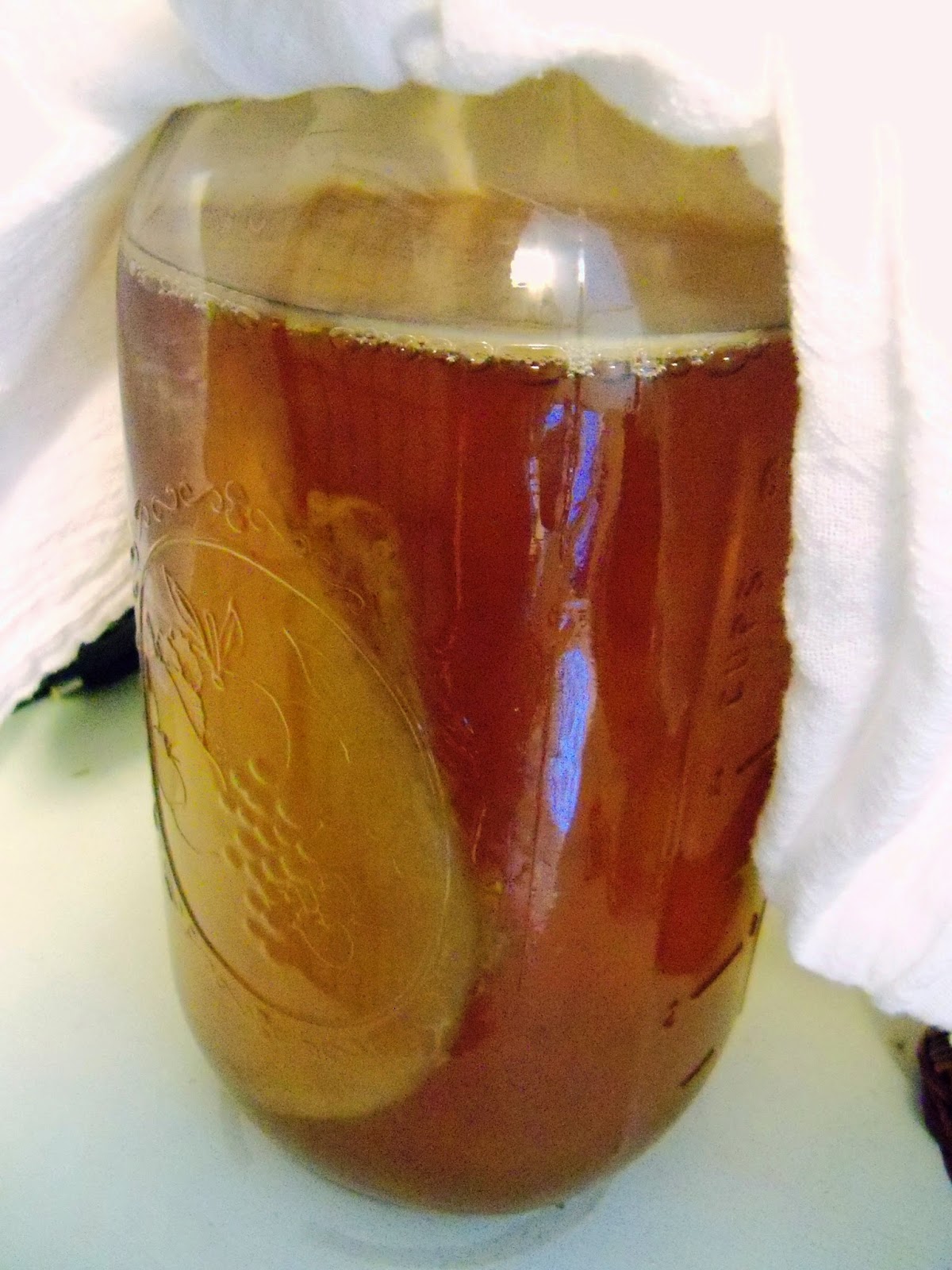 I met somebody via a local Facebook group willing to give me one. It just so happens we get milk from the same milkman at the same drop-off in town. So one day there was not only our milk waiting for us in the coolers, but a bag holding a snotty pancake floating in a pale brown liquid.

Kombucha, by the way, is actually quite good. It tastes somewhat like apple cider, only a little less sweet. This taste can vary, depending on ambient temperature, location and brewing time. Supposedly even the phase of the moon can influence it, as well as chaos in the household. It is, after all, a living thing.

I brewed kefir on a regular basis a couple of years ago. It was easy enough. The hard part was slinging the stuff back. Then, of course, I sort of left my kefir grains in the fridge and forgot about them. They weren’t too happy. Well, they were dead, actually. So we’ll see how long I can keep this critter alive. I’m sure it will depend on how much we enjoy the finished product.

It is usually finished in 7-10 days, depending on all the aforementioned factors. In the process it also forms another culture. (SCOBY by the way stands for Symbiotic Colony Of Bacteria and Yeast.) This second SCOBY is called the “baby”, and can either be used in brewing additional batches, given away to people (e.g. my adopted culture), fed to livestock, composted, or even eaten yourself (um, gross).

We also tried out the lacto-fermented ginger ale recipe from Nourishing Traditions. This stuff was STRONG! We found it was best enjoyed 3-1 in seltzer water. I also found that some honey improved the flavor. Some fruit juice mixed in would have been good too.

So that’s what’s brewing on an aerobic level. I also have some simpler, anaerobic processes happening….
… basically just tossing stuff in vodka. In other words, EXTRACTS! These are so simple to do, I can’t imagine ever having to buy an over-priced extract from the store again. 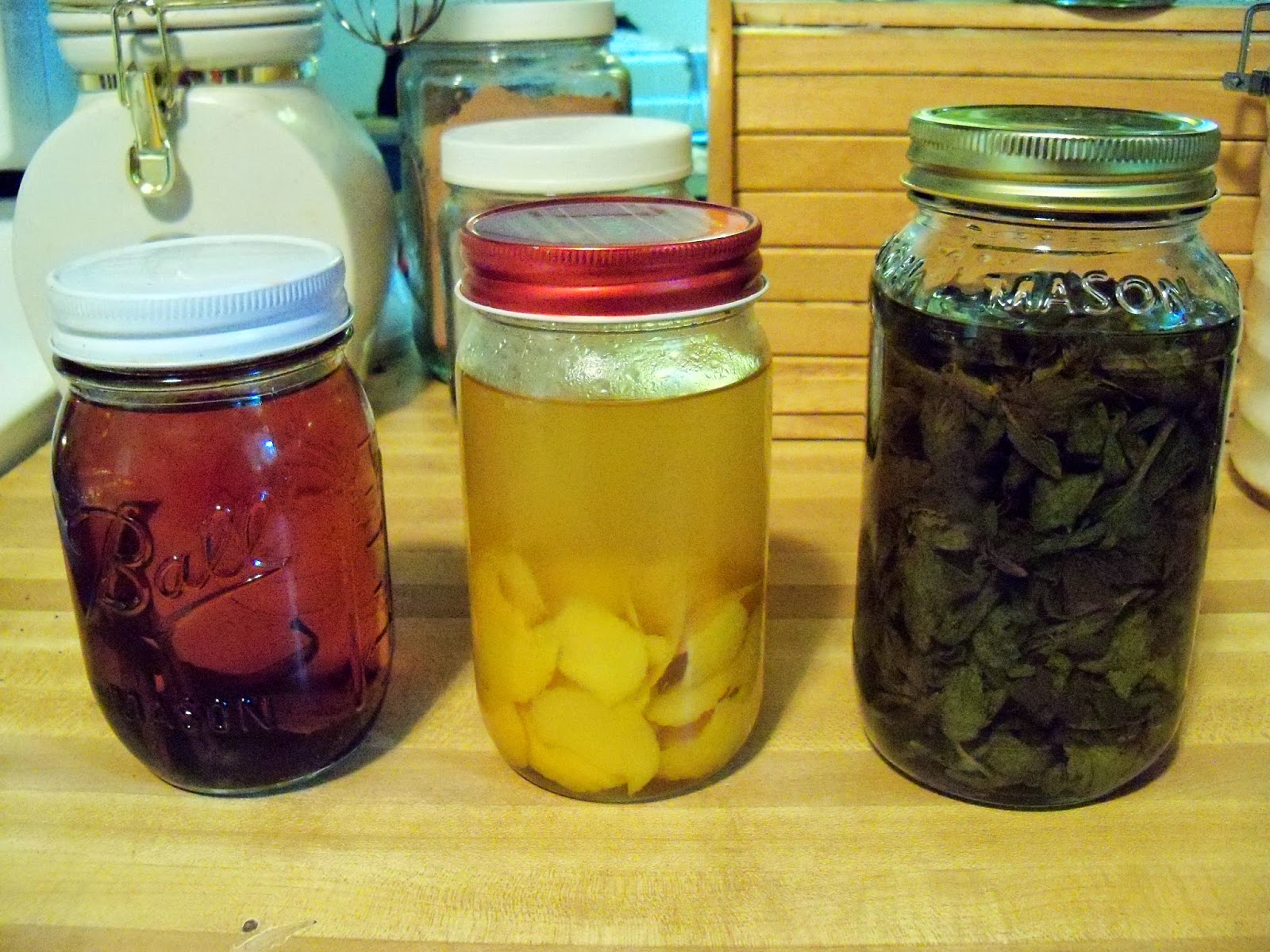 Vanilla, orange, and mint (spearmint, I think. Whichever mint is taking over my mom’s flowerbeds.)
These will all be complete within a couple of weeks.

Another critter I’ve tried (and failed) with in the past is sourdough. Well, I didn’t even try, to be honest. It just sat in my fridge and died along with the kefir grains. (Of course there was that one time, long ago in 4-H that I baked a successful sourdough loaf.) Let me just get something off my chest right here and now:

(There. I feel better now.)

Bread baking is messy, time-consuming, and SO unforgiving. I can screw up even the simplest, most foolproof of recipes. There is much weeping and gnashing of teeth (lots of swearing, in other words.)  It always seems to end with me throwing my flour-pasted hands up in exasperation and swearing I will never do it again. There has been one success on record. Many years ago. None since. I’ve baked bricks that could knock out a gorilla. 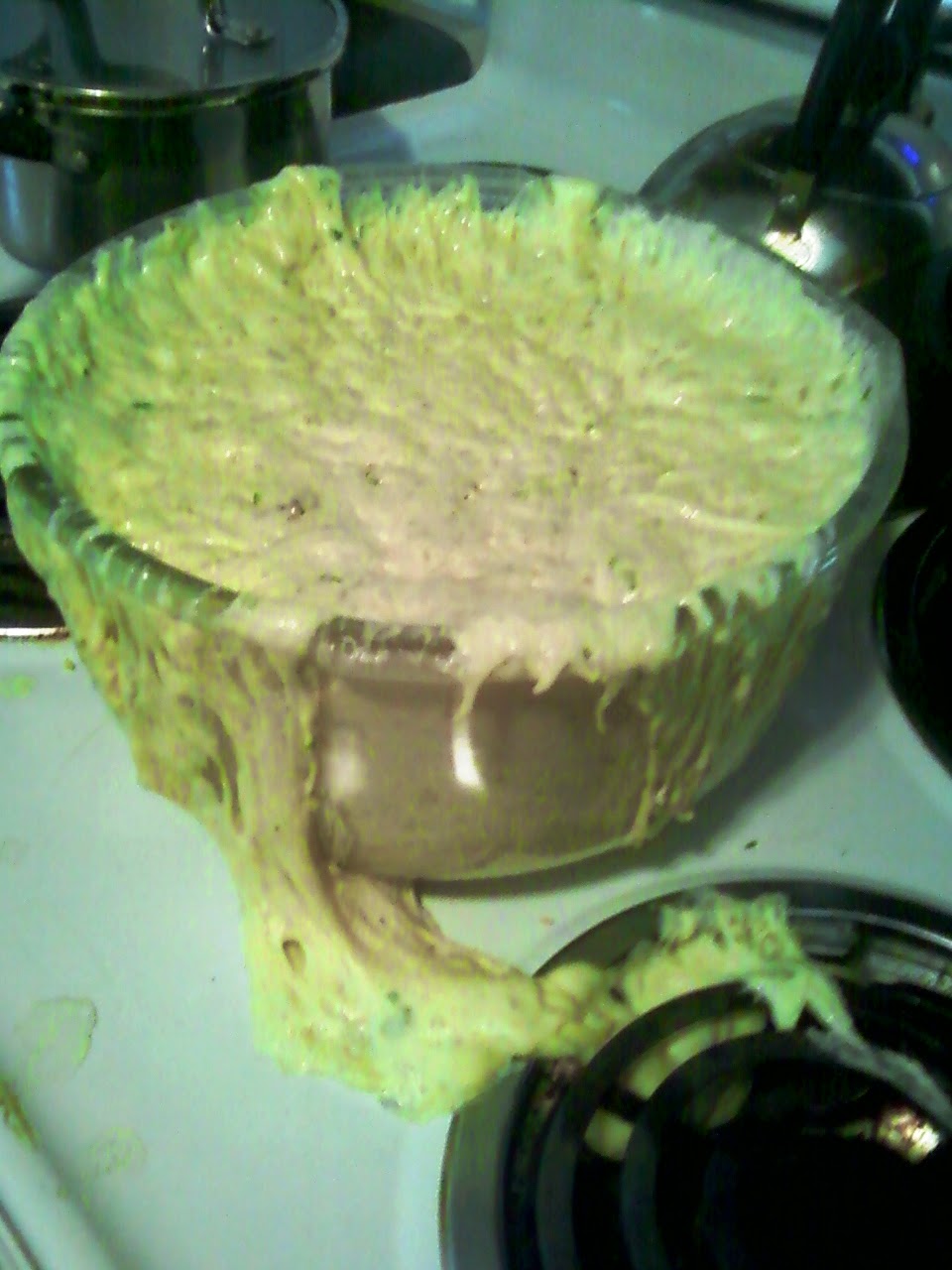 My latest escaping loaf. End result, not so good. Neither was cleaning my stove.

Unfortunately though, we do eat bread. And my husband loves fresh-baked bread. (So do I, when it turns out to be edible.)

So once the flour settles from my latest attempt  failure, I resolve to try yet again.

This recipe seemed easy enough. And look at all the happy comments heralding success!

I think I broke the record for the world’s heaviest loaf.

I’m sure some bread-baking artisan could approach me and tell me all the things I’m doing wrong. They are probably laughing at me right now.

Maybe I’ll give it another go, some day. And maybe, just maybe, I’ll get it right.

For now I’ll stick to what I’m good at. Hopefully brewing kombucha is somewhere on that list.

*UPDATE* The kombucha turned out great, and I have started my second batch!
Posted by Phacelia at 6:49 PM