Things are really growing around the homestead!

While this doesn't include succulent fryer rabbits, sadly enough, there are plenty of other things developing into food.

We finally got a hold of my dad's tiller, and tilled our little garden space. I was having doubts about even fooling with a vegetable garden this year. With a thick carpet of weeds and the spot only receiving a maximum of 5 hours direct sun per day, I was beginning to wonder if it was even worth it. But we decided to go for it anyhow.... 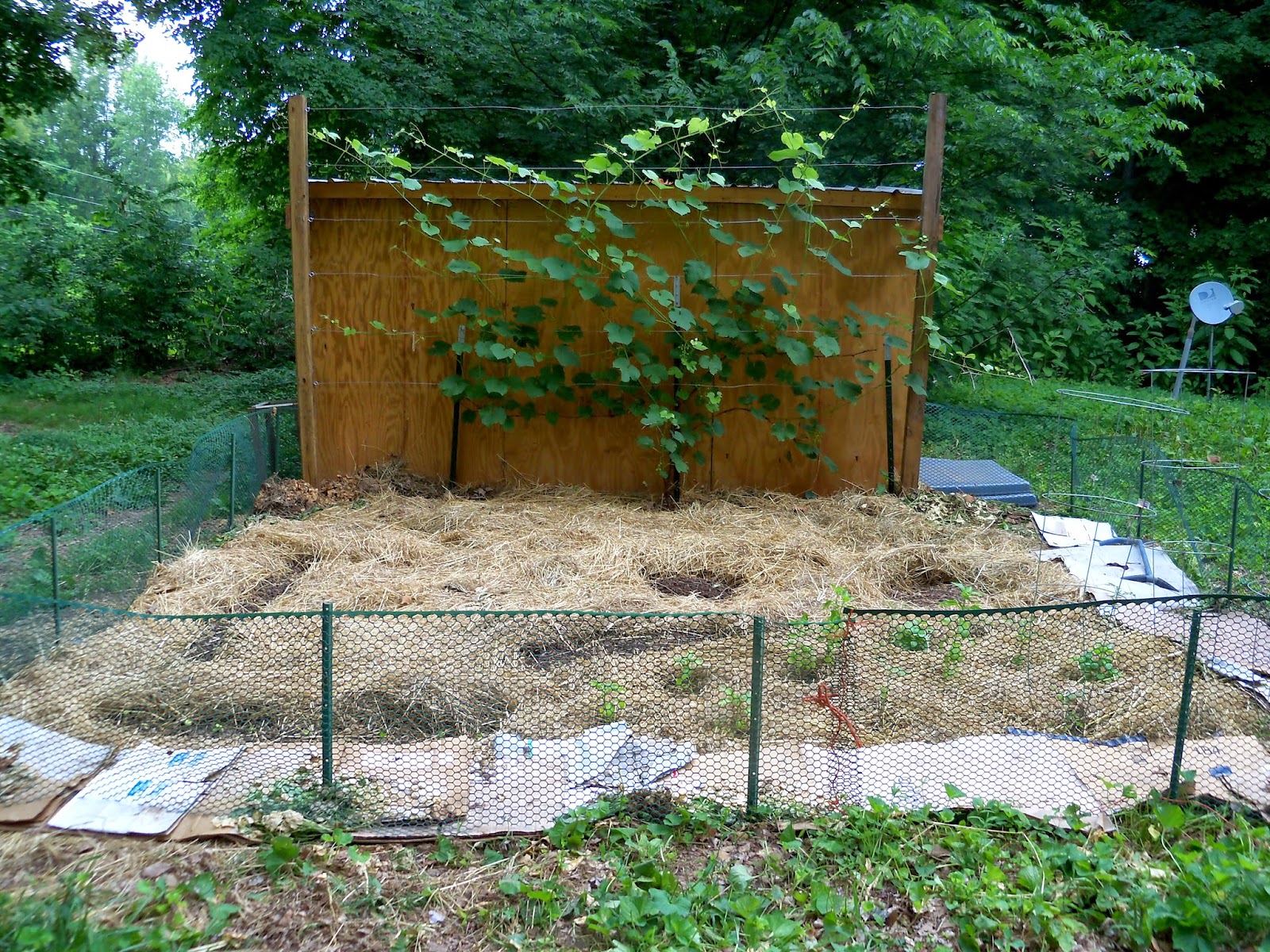 
In addition to finally getting the soil well worked for the first time ever, we are experimenting with deep mulching with hay. I considered buying a big roll of cheap cattle hay, but decided to just use a couple of bales we already had stored away for rabbits. Considering I only have two rabbits and we've not even gone through an entire bale yet, I decided we may as well use them. It still seemed like a shame to use such fine, sweet-smelling hay for mulch. But hey, it's not really going to waste. 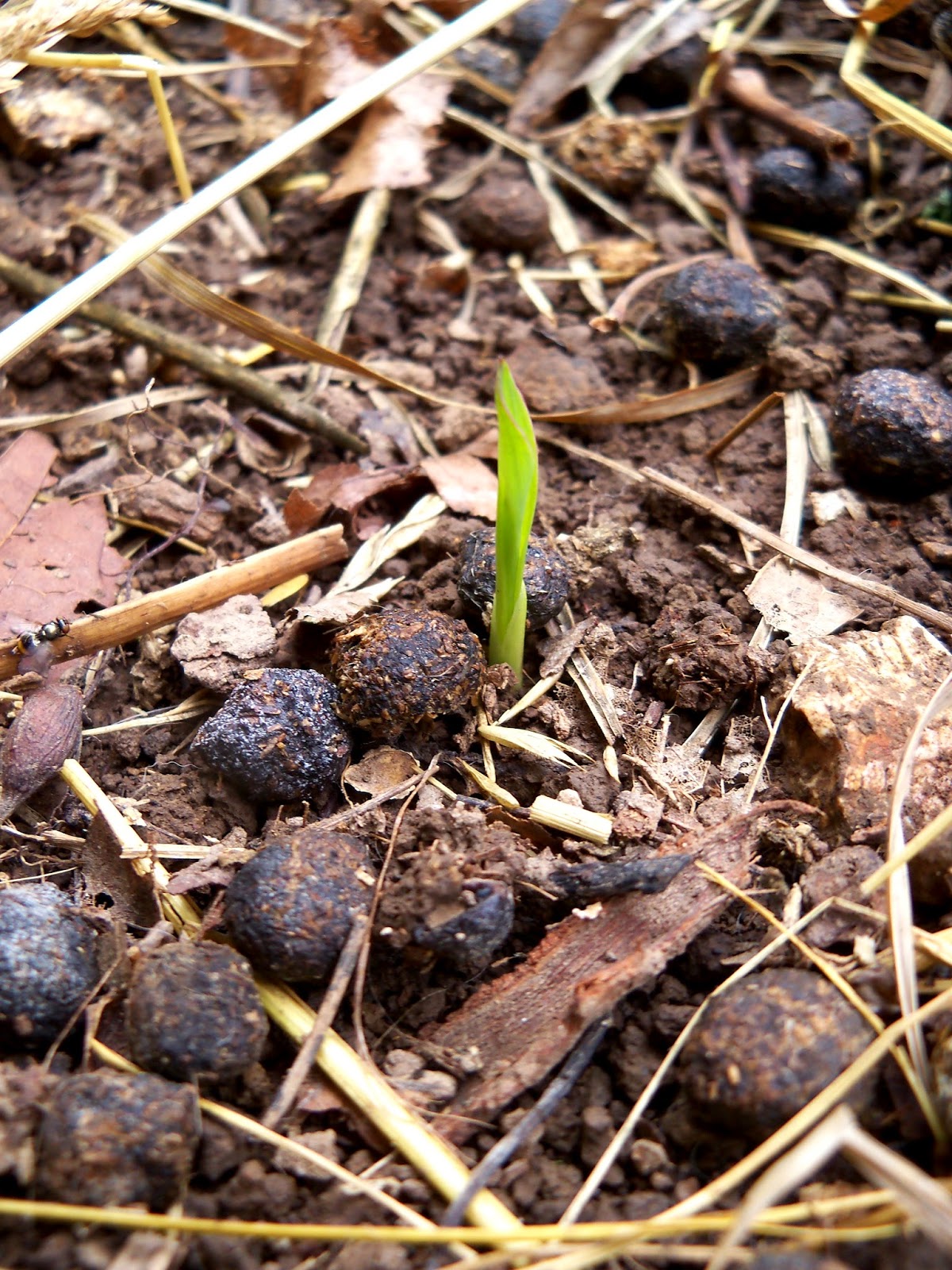 Notice I'm putting the "bunny berries" to good use

It already seems to be holding more moisture. I think it's still too thin in spots to keep the weeds from sprouting through, so I'll probably add some more hay in places. We also didn't have time to rake through the soil and remove all the existing weeds since we were trying to beat an oncoming storm. We got the hay strewn out just in time! If things go well this season we shouldn't have to ever till again. We shall see.

I didn't plant a whole lot this year, just in case things don't do well. A majority of my heirloom seeds got planted in my parents' big garden space at their farm. I planted a row of Painted Pony beans, Edmonson cucumber, Strawberry popping corn, and a hill of Black Beauty zucchini. I bought some Cherokee Purple & Amish Paste tomatoes, as well as garden salsa peppers. So far everything looks great, but we'll see what the yield is like. 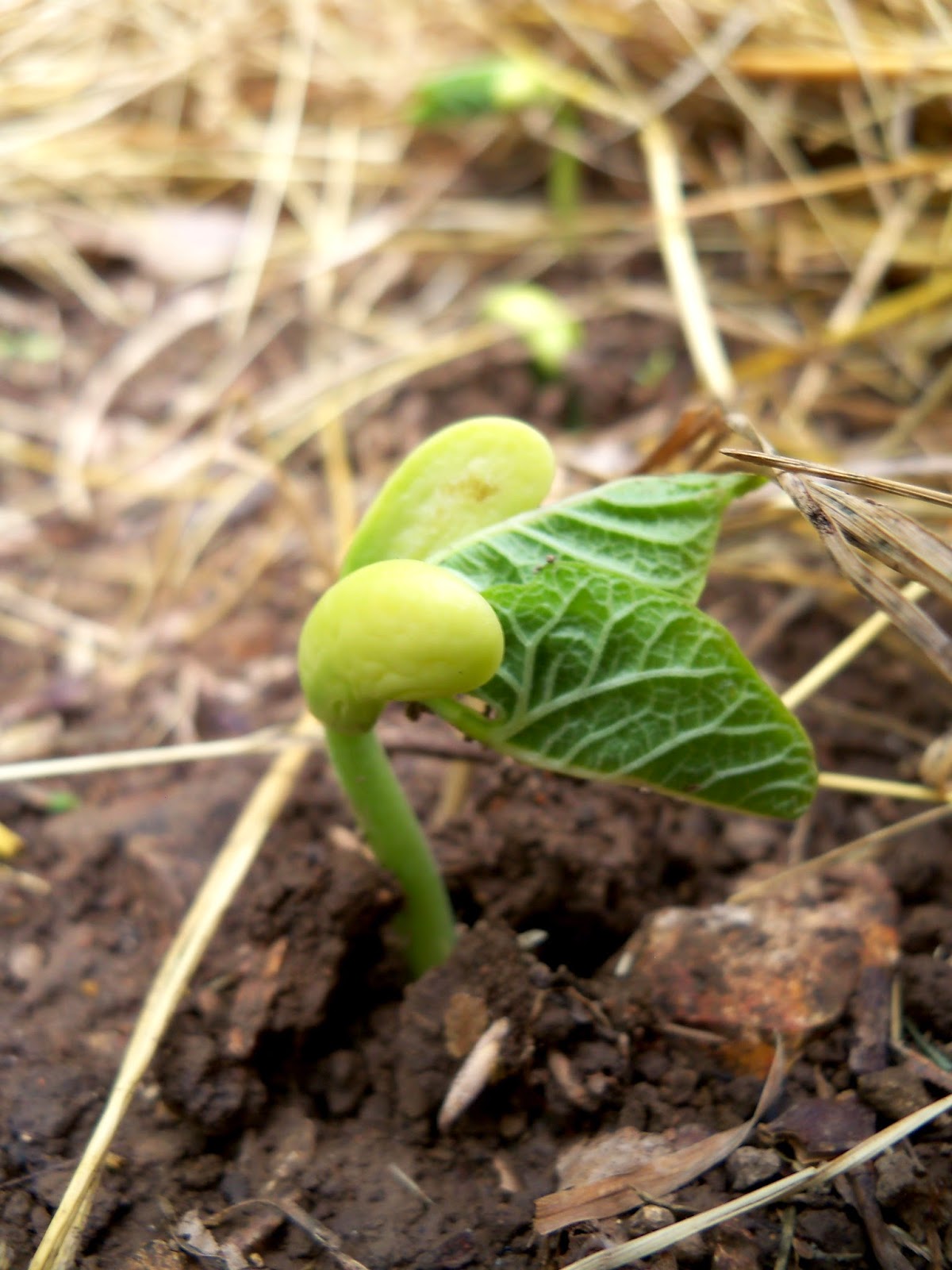 I planted a patch of basil and cilantro as well, and have a little space reserved for some dill.

Since I didn't have a whole lot of space in the garden, I have some other veggies in pots: 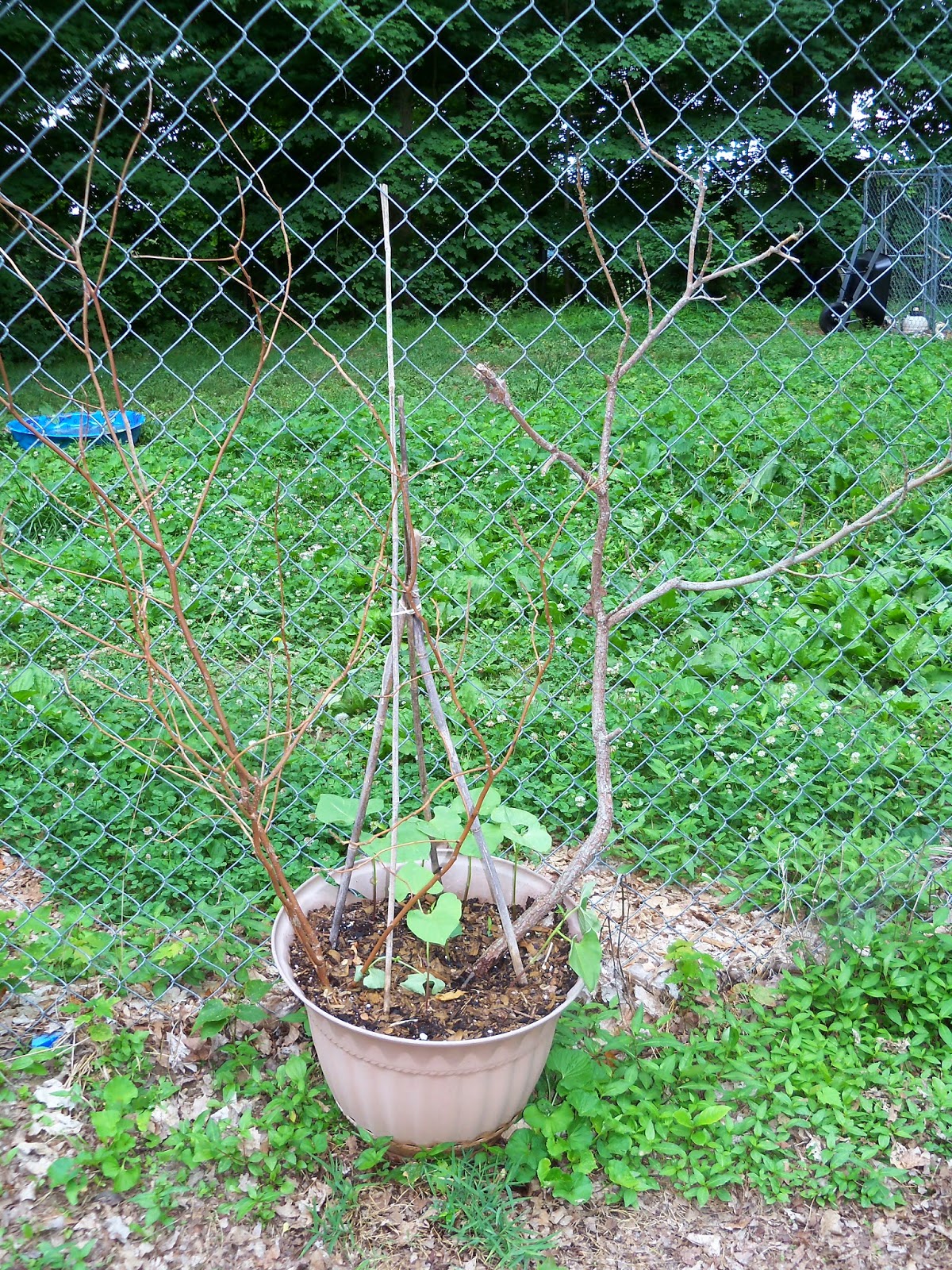 It's kind of an experiment as well. I want to see if the plants do better in pots with more sun, than in the garden with less sun. That will help me determine whether it's worth it to plant sun-loving veggies in the ground next season.

I went ahead and ordered heirloom garlic to plant in the fall, and will be on the hunt for seed potatoes as well. This will be my first year with cold-weather veggies, so I'm excited!

My herbs are all faring very well, especially now that I've successfully fenced out the chickens.

The fence is ugly, but effective. Here's my current collection:

I've also sewn some calendula and nasturtiums, and added catnip, hyssop & chervil to the mix this year.

I'm trying to utilize my herbs more. I dried some sage in the dehydrator, and have already used it in cooking. I want to start making herbal extracts, teas & vinegars as well. 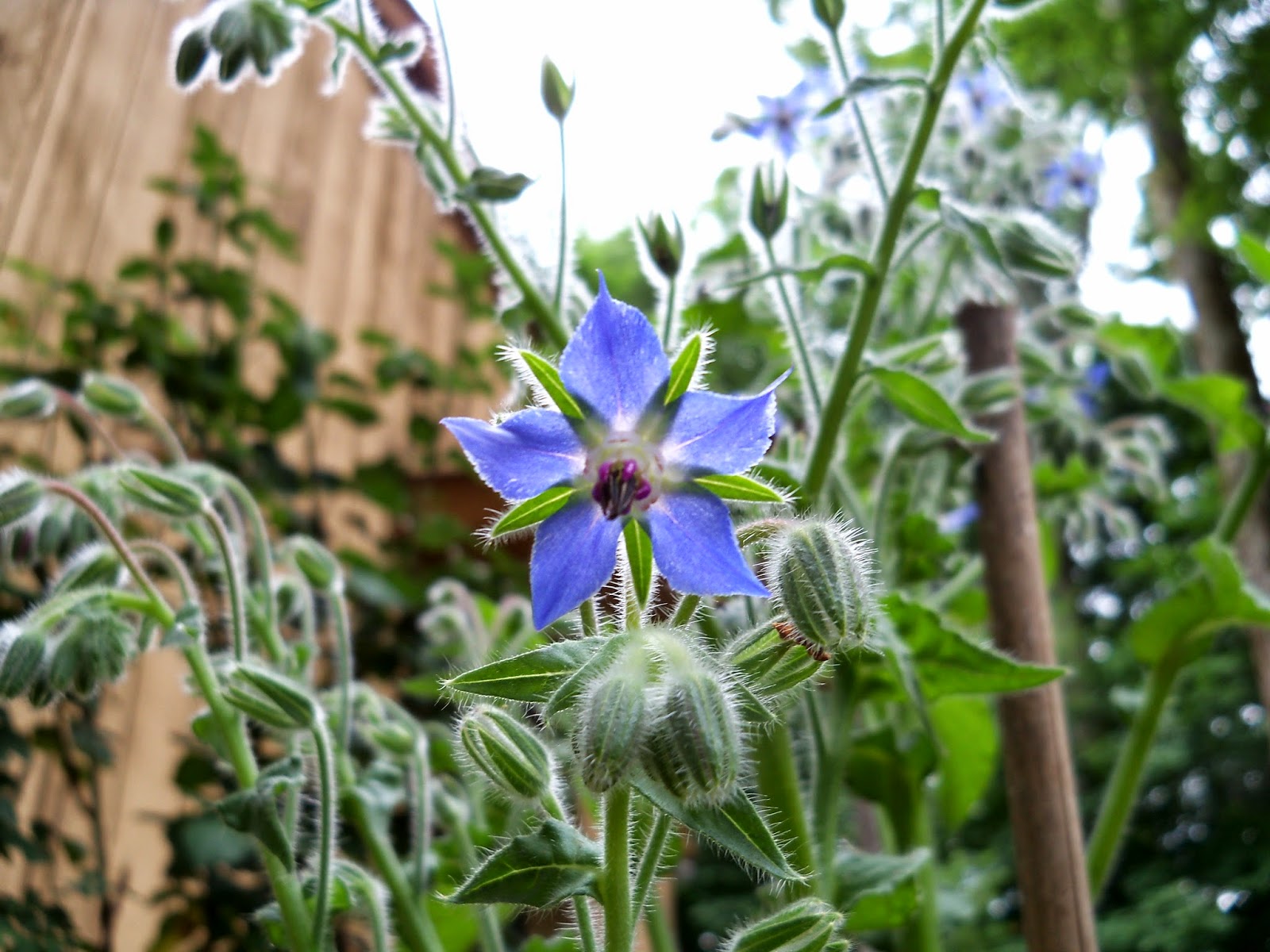 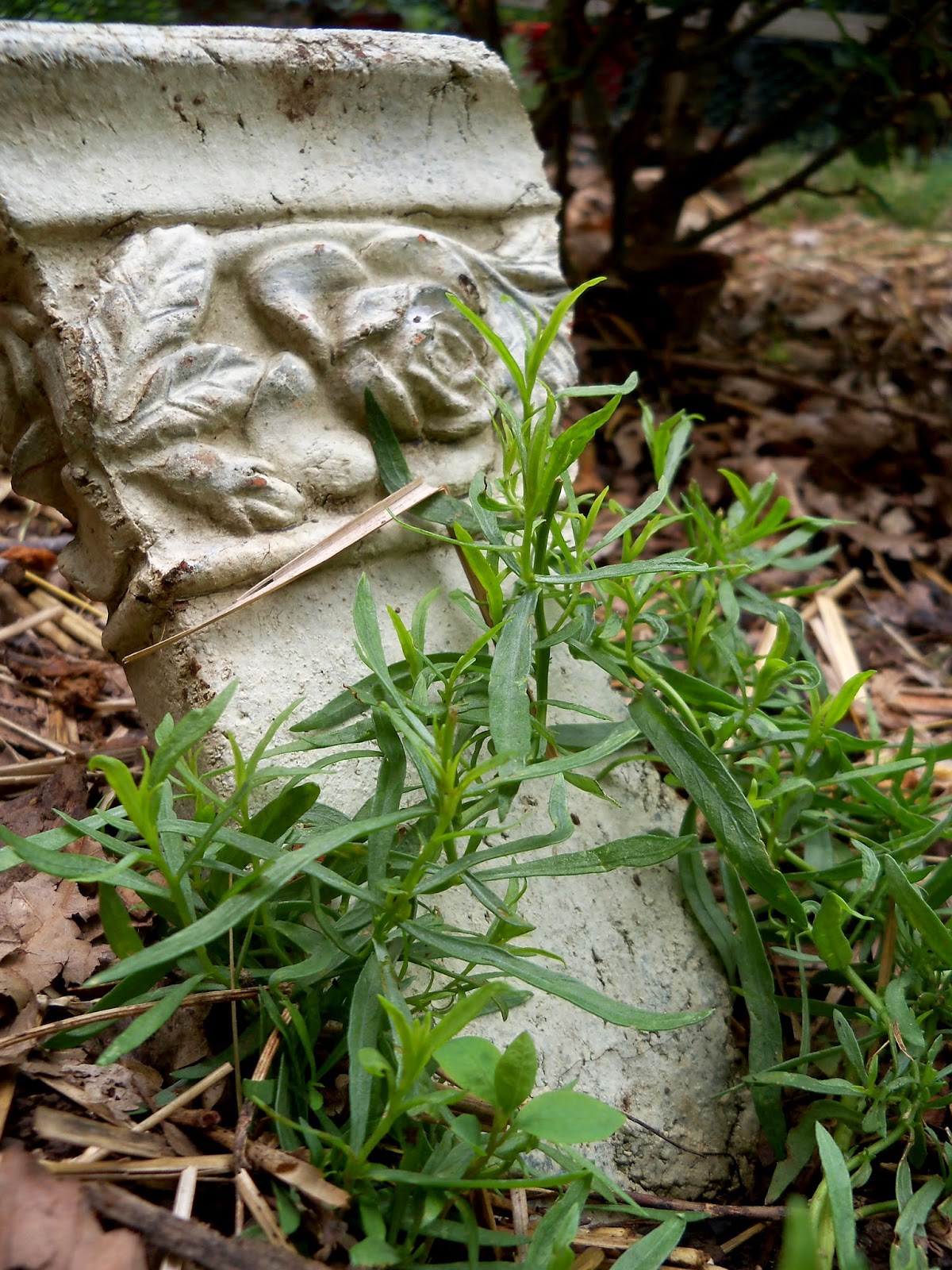 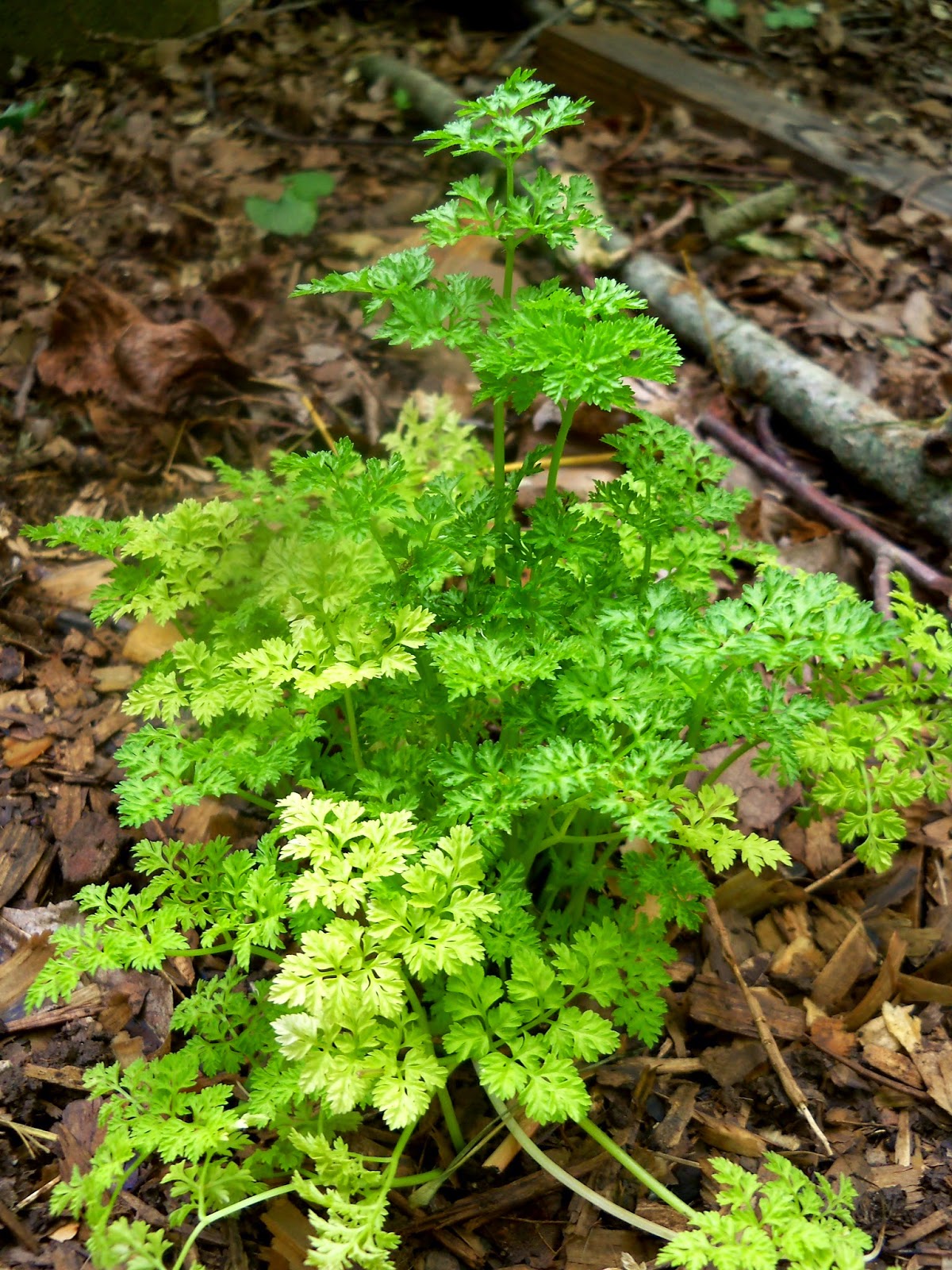 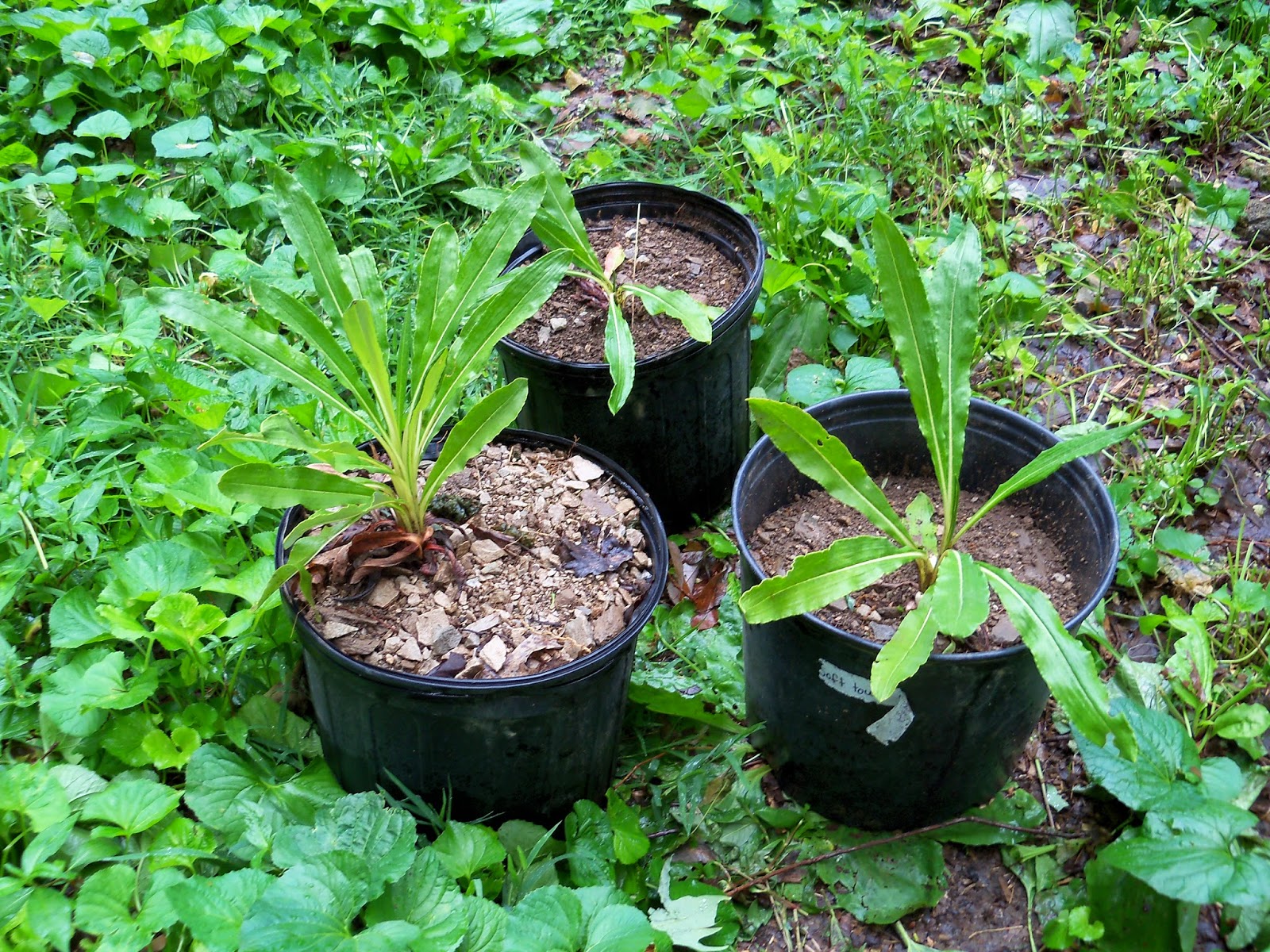 There are a total of 13 he is attempting to transplant

These Harper's Umbrella plants are in the process of being rescued from a Roundup soaking over by the dam. Mark has become the park biologist, and the Corps has been working with him to help preserve habitats and species in the wake of their projects. The hillside where the Umbrella plants are growing needs to be stripped of vegetation so the dam can be inspected. I was impressed that they were willing to  hold off so Mark could attempt a rescue and relocation effort. We've been consulting with botanical experts to try and determine the best way to go about it, because as far as we can tell nobody has attempted it before. If it's successful it will certainly need to be documented.

Harper's Umbrella Plant by the way, is considered critically endangered in Tennessee, and is only found on the limestone bluffs around the Caney Fork River basin. Otherwise it's only found in similar habitats in Alabama and Kentucky. They have very specific habitat requirements, and very deep taproots, so it will be interesting to see if this project is successful. 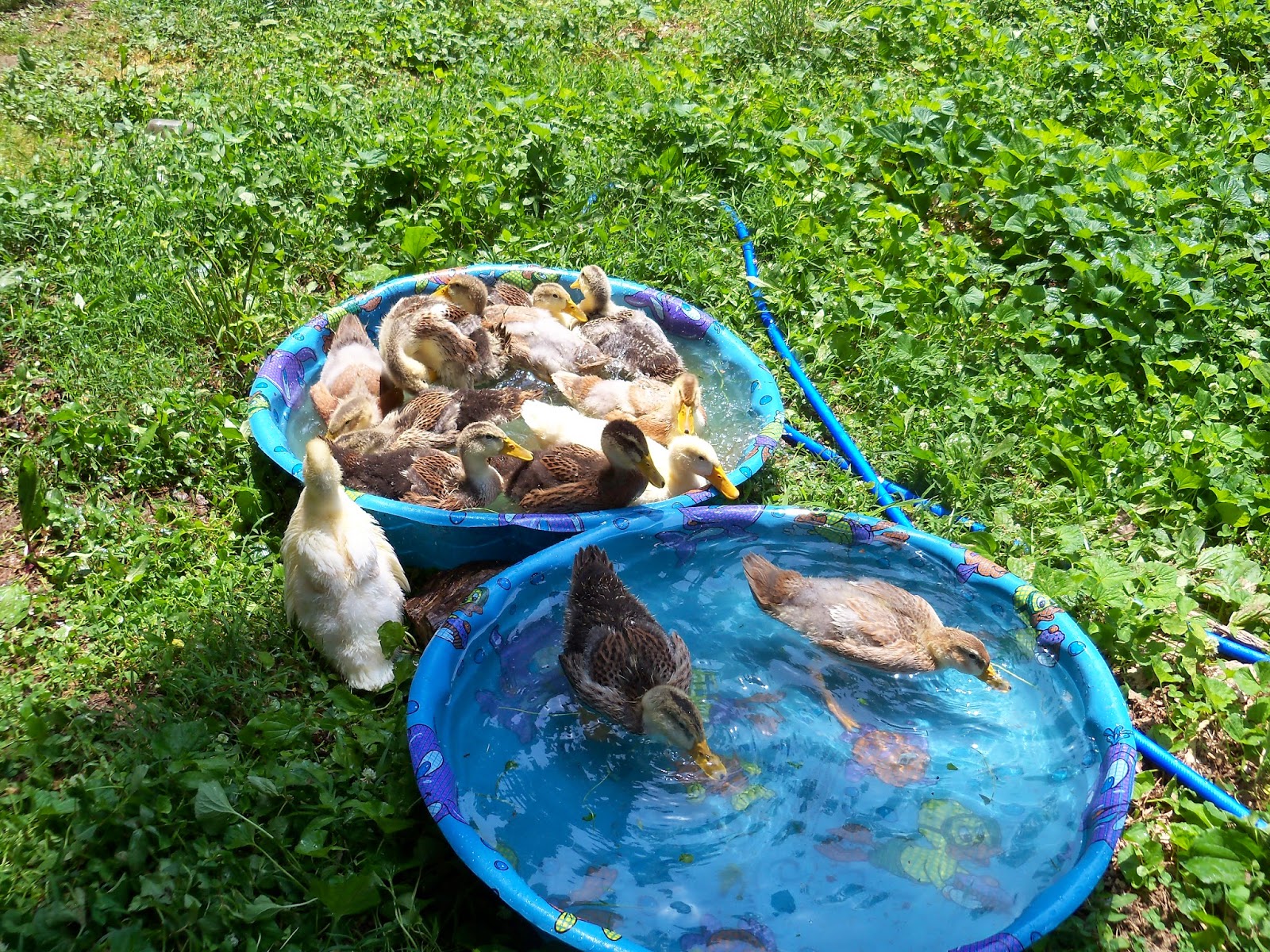 Well, not in this picture... this was when I introduced them to their swimming pools a few weeks ago. I love how most of them wanted to cram into one. 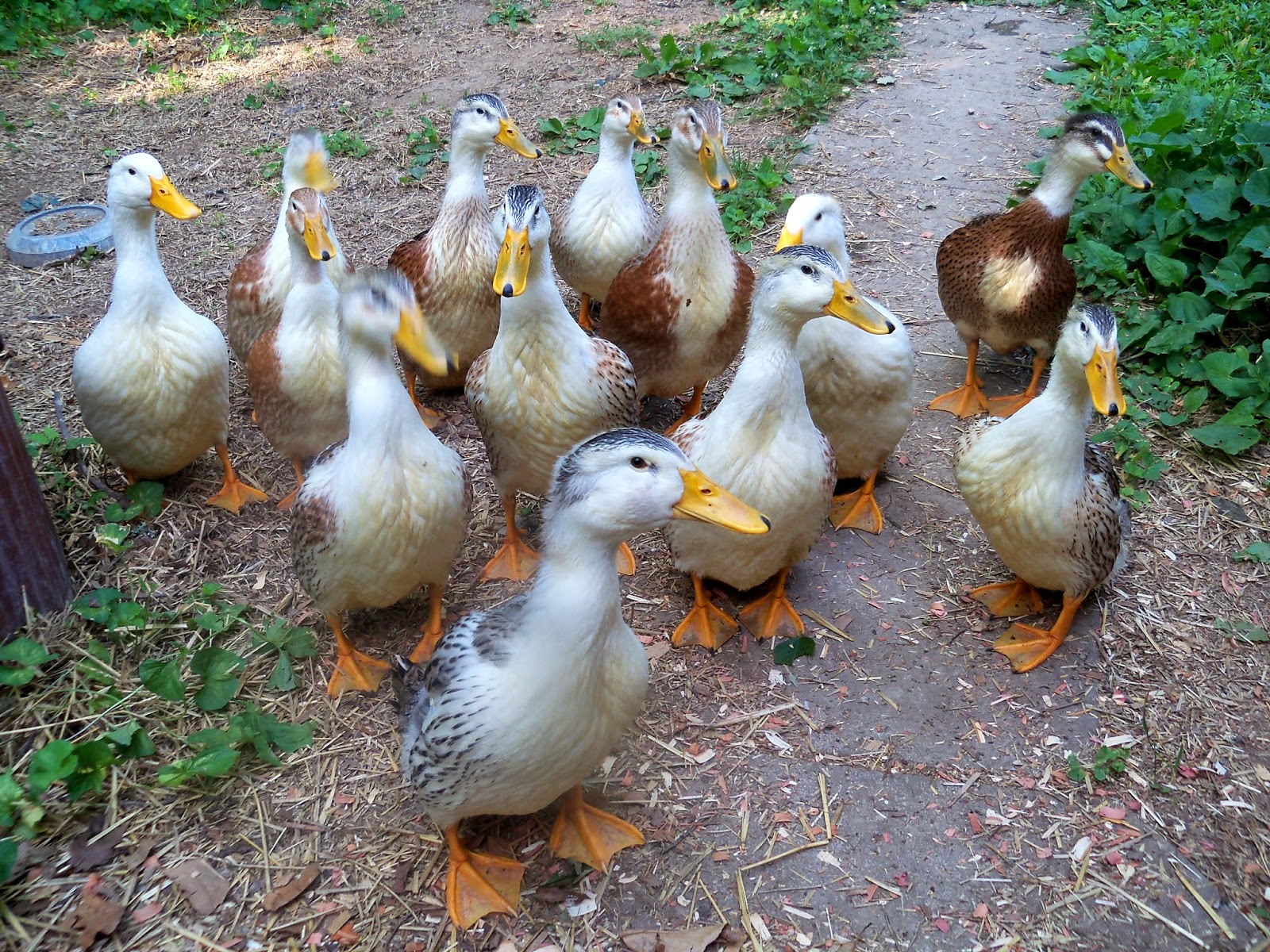 Here are the 7+ week birds. I made them wait to be fed while I took their picture.

I can finally tell who's a hen and who's a drake, but I haven't yet taken the time to figure out just how many of each I have. By next week they will technically be ready to process, but I'm not sure if we're ready. If not we'll have to wait until after their first molt. I'm thinking we'll just do 3 of them for starters, and try to re-home the rest. I've already identified the pick of the litter, so to speak: 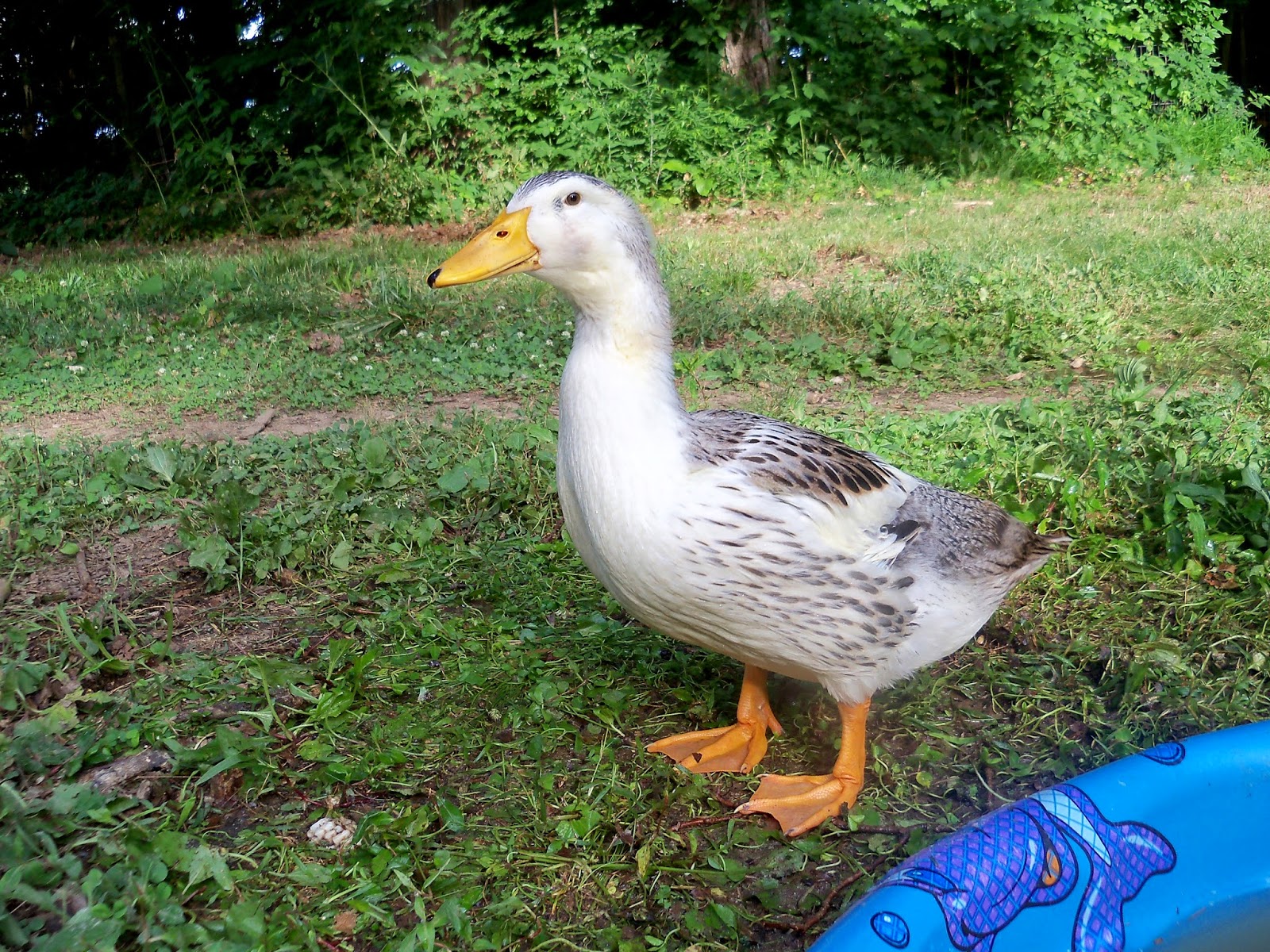 This hen has great size and color. I will definitely hatch eggs from her next year. The drakes I'll really need to wait until their adult plumage to decide who to keep.

Luckily we've been able to let them range in the dog yard during the day, at least while we are home. I'm still feeding them twice a day, but I hold off for an hour or two in the mornings to encourage them to forage.

And last, but not least, is our growing boy! 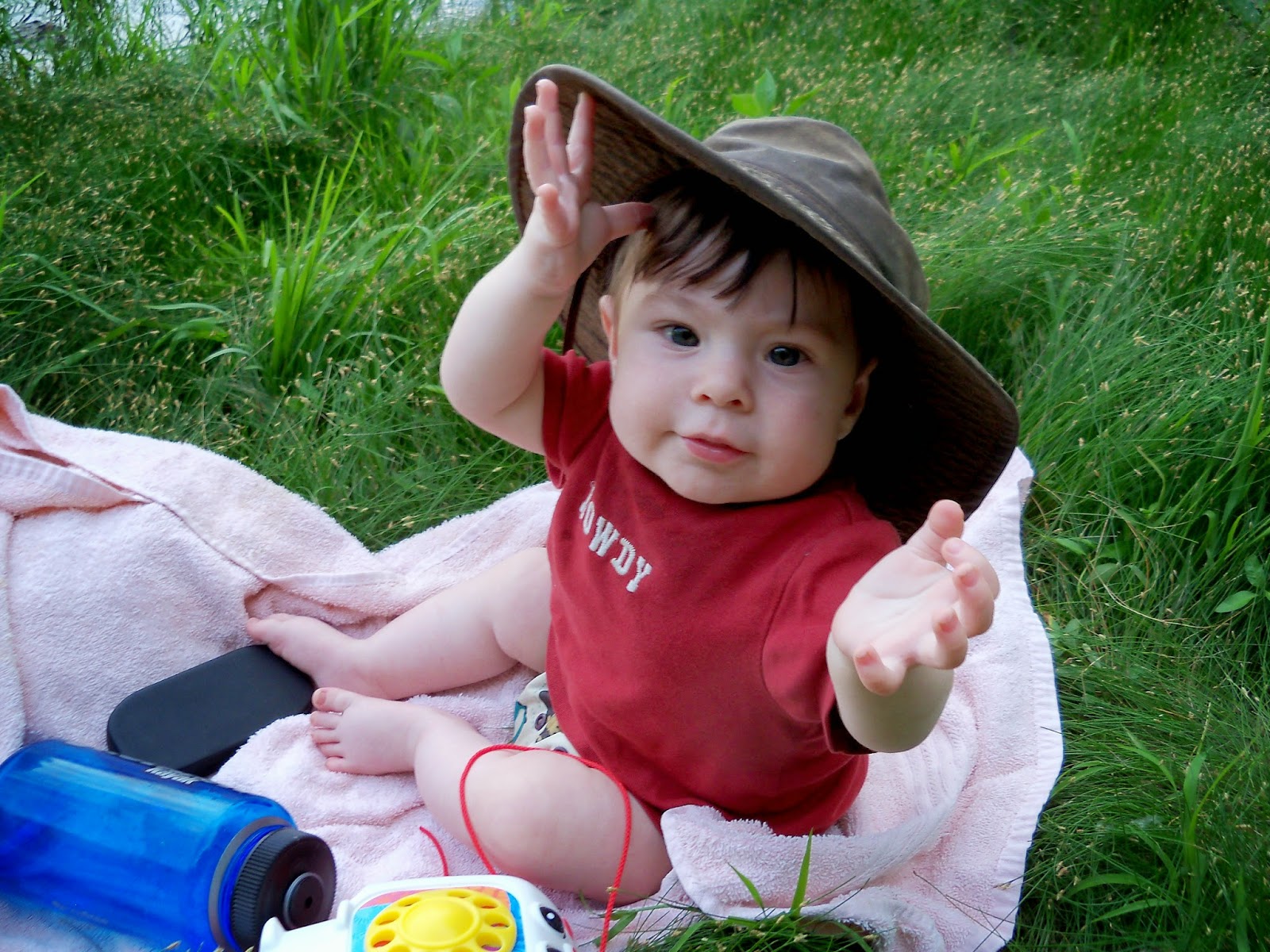 Here he is playing by the river with daddy while momma got to do some kayak fishing!

Seven months old already! So close to crawling, and babbling up a storm.

Next month our crappy Verizon internet goes away, and we are signing up with the local phone company. Basically the same price for UNLIMITED data. Hopefully my blog posts will become less sporadic.