So the rabbit saga has continued in tragedy and frustration.

As it turns out Coy was not pregnant from the first breeding before purchase, but from the test breeding to Turn.

She finally started showing signs of nesting: pulling hair, stuffing hay into her mouth et cetera. (Unfortunately I have no pictures to document this since my little Nikon hit the pavement and died for good.)

On the 34th day of her gestation I finally noticed a kit, uncovered in her nesting box. I took out the box and dug around to find a second kit, squished against the back (dead, obviously). The other one was barely alive. She had obviously made no attempt whatsoever to attend to it. I placed it back in, covered it with hair and left her to her own devices, hoping her instincts would kick in. They never did, sadly. When I returned later the kit was uncovered again, and no longer alive.

I looked her over and could see other live kits wriggling in her belly. I was hopeful she would deliver the rest and still have a successful litter. I left her alone until the next morning.

No kits. So she either delivered them in the night and ate them, or they all died in utero.

I was pretty upset that this litter didn't work out. Although I really wasn't surprised.

Her prolonged illness, the Baytril & the heat were all working against her.

After her failed litter she looked worse than ever. She wasn't even bothering to clean the thick white snot as it seeped out of her nostrils. She looked tired, sick and stressed. I knew it was time.

So the other day we did the deed. I knew it was inevitable. I really didn't even like her very much, personality wise. But it was still very sad to bag up that beautiful, rare rabbit.

So over the last 3 months I've gone from 4 rabbits to 2. That doesn't ring very loudly of success.

For two of those months I was unable to get in touch with the breeder. I was concerned she either didn't want to deal with me anymore, having decided I was unfit to care for her rabbits; or something tragic had happened to her.

Luckily she did finally get back in touch with me, letting me know she was still planning to get me some replacement does. They had been dealing with a family emergency. So whenever she feels good about leaving her farm, she will try to meet up with me.

In the meantime I've just been trying to enjoy the bucks. They are my favorite, anyhow. I've been trying to handle them more, to get them used to it and for my own experience. I trimmed Turn's nails yesterday and observed that his scent glands really needed a good cleaning. I also weighed him and just gave him a good look over. I think he was a little traumatized from all the sudden handling, and didn't want to approach the front of the cage this morning when I delivered their salad.

Without the sick rabbit weighing my mind, I've been mulling over some other things. Namely managing the rabbitry itself. I'm seriously re-thinking the location of the shed. We technically built it to be "portable," but after all the reinforcements I know it will be a huge pain to disassemble and reassemble. I knew going into this that the best location in regards to shade and breezes would be the backyard where the dogs are. Of course, the two dogs back there I really felt I couldn't trust to leave the rabbits alone. So all things considered I decided the front yard would be  better.

Unfortunately, the shed is in direct sun during the hottest part of the day, and will only get more hours of sun as the summer progresses, and the heat and humidity increase. So it will take more time and resources to keep them cool: fans, frozen bottles, hosing down the roof, etc.

I've already had to keep a close eye on them when the days were around 85. So what's it going to be like when it's 98 degrees and 90% humidity?

It has really taken off and is already climbing the shed. I really don't want it to climb on the actual structure, however. So I'm thinking some sort of arbor, ideally over the shed would be good. We would need a ladder to reach the grapes, but it would go a long way towards shading the shed.

So how can we build an arbor without breaking the bank? I was thinking stock panels and re-purposed wood. We need to make it soon, though!

We also need to cut windows in the sides to catch the breezes better.

I've also decided I'm really not crazy about the stacked cages with the trays. The rabbits are sitting closer to their waste, and then they cost extra time and money to maintain. I'm tempted to sell them and use nothing but hanging cages. The pine bedding doesn't work very well to soak up the urine, and we go  through so much of it. I read on a forum that horse stall pellets work a lot better and are more cost effective. So I think I will go that route in the meantime.

Right now all the trays are pulled out, since there is only one rabbit per unit. I also noticed the absence of the trays is better for ventilation.

The Appleyards are now 3 weeks old, and getting huge! Everyone is doing great, even the runt. They have gotten ridiculously tame, without me even trying. The shed and 10x10 kennel are working well as temporary housing. I also let them out to forage and play in the water when I can. Ian loves to sit and watch them. They will come up and nibble on him. He managed to catch one the other day! 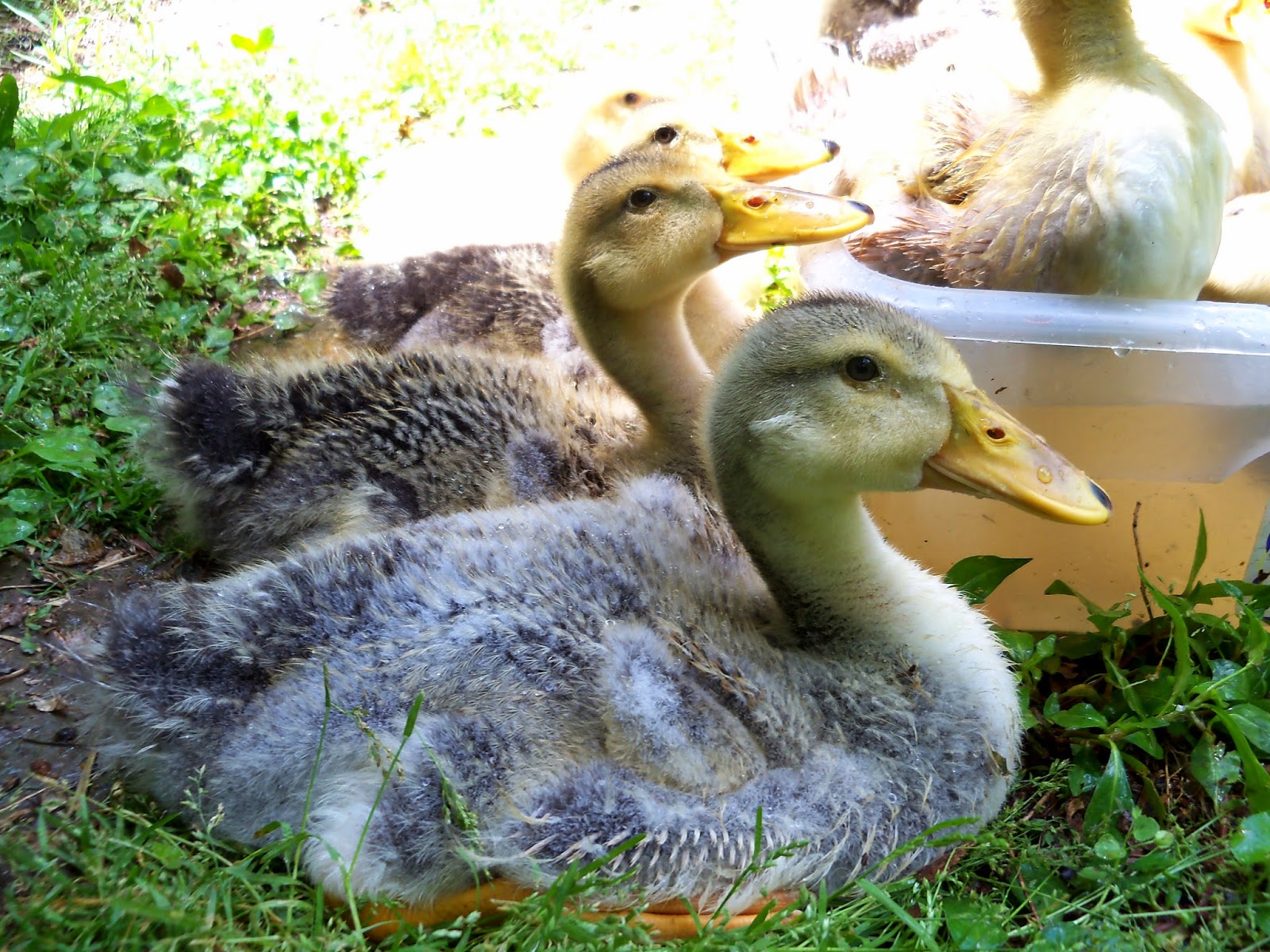 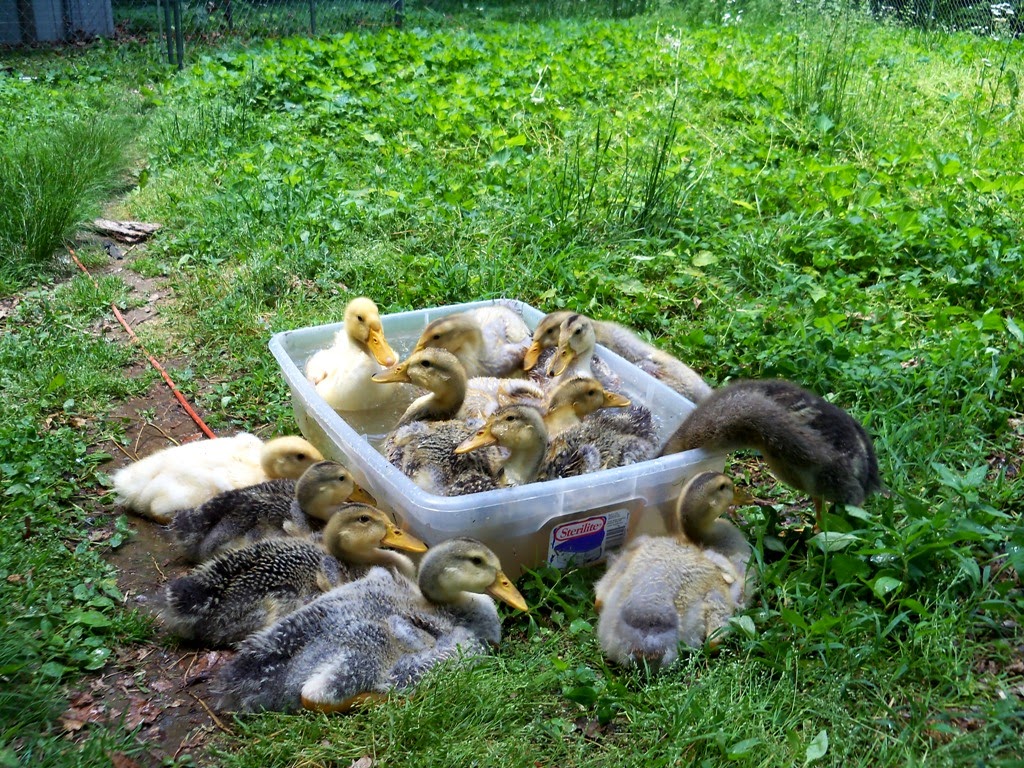 Taking their turns at the "pool." I've got to get them something bigger! This White Appleyard is the biggest of the ducklings. I also think he(?) has the prettiest head. I'm hoping I have a male and female in the whites. 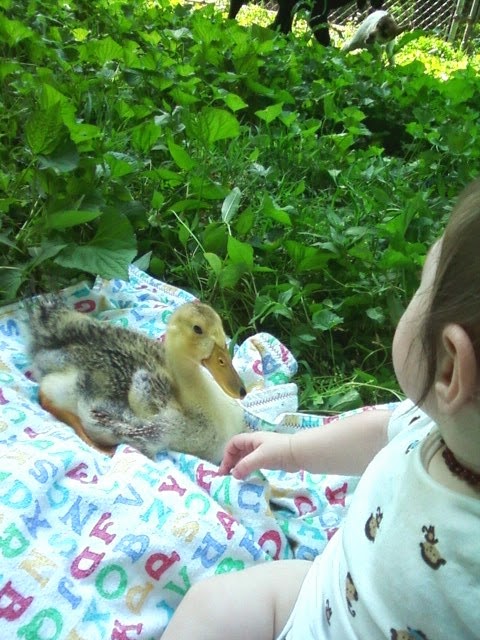 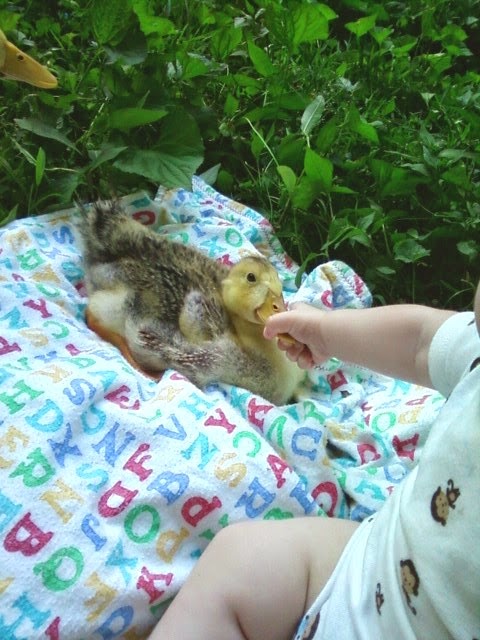 This was a funny moment. The duckling really didn't mind too much.


They're beginning to get their feathers, and I'm detecting some differences in their voices. Still not enough to know who's what yet.

Ian has mastered sitting up and is trying his hardest to crawl. He's a strong, bright and healthy boy! I'm very thankful. 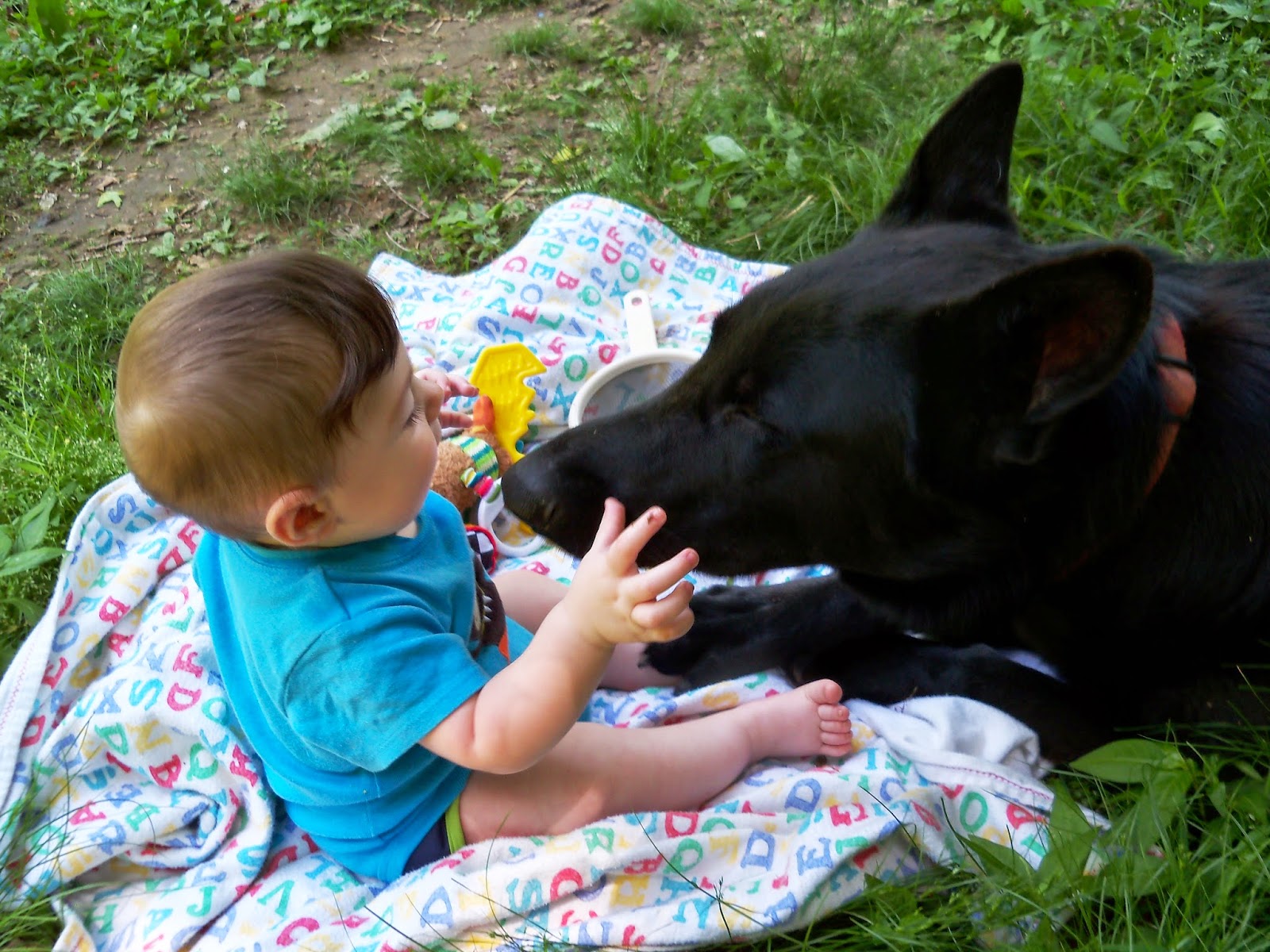 He and Tala are becoming good friends. 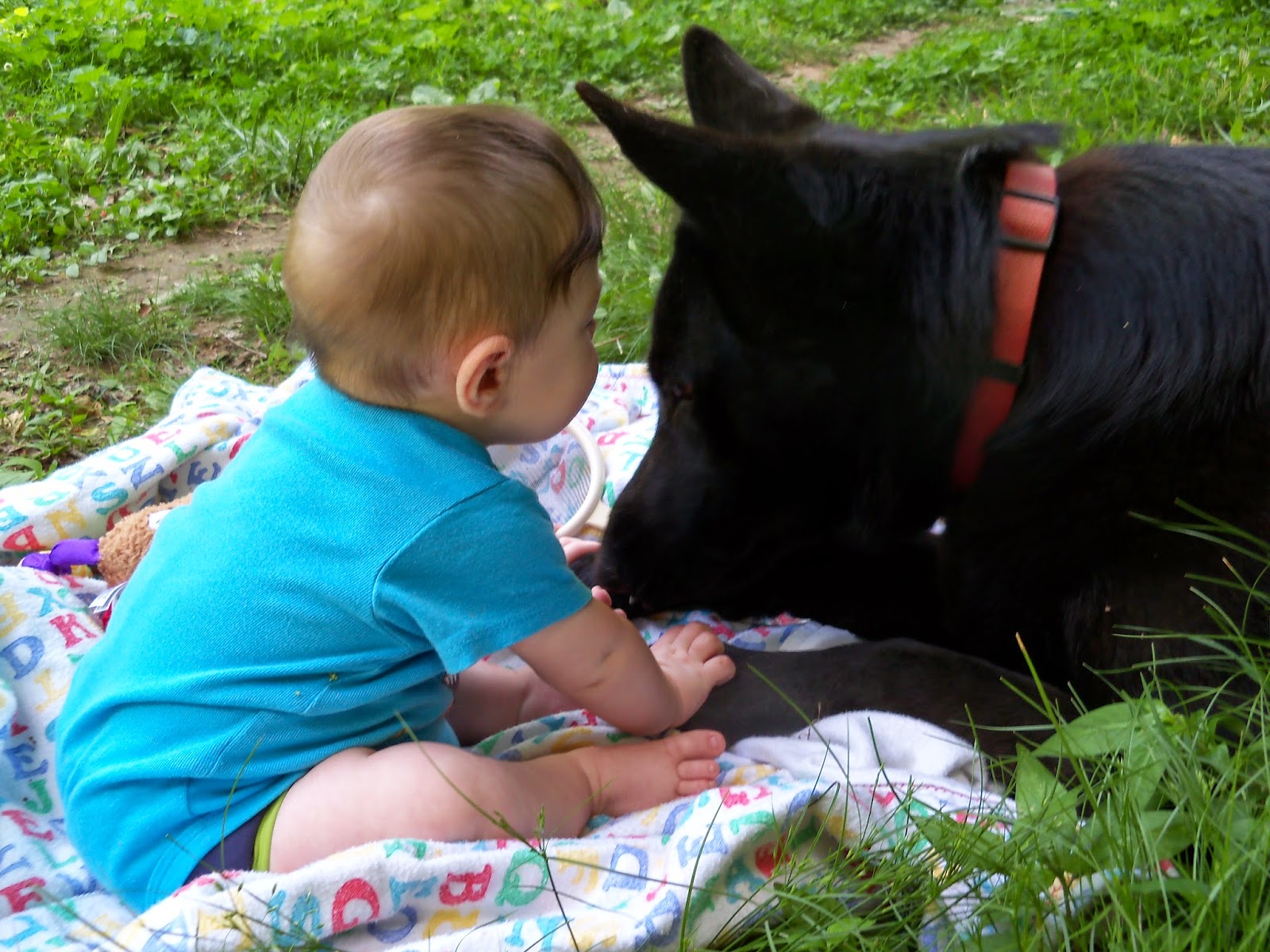 Oh yeah. And of course, I celebrated my first Mother's Day! 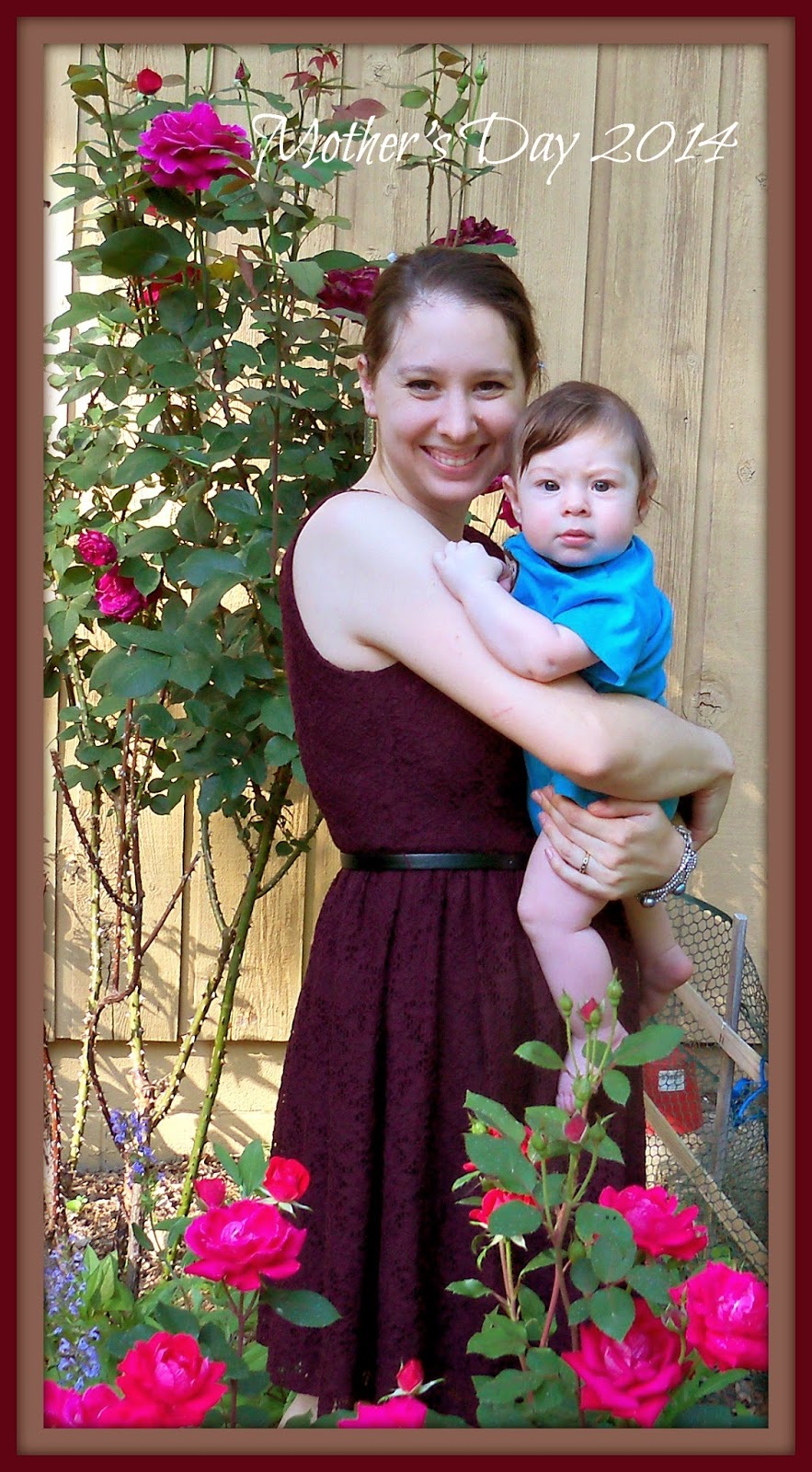