We’ve been busy with last minute preparations before our rabbits join us at the homestead.

Finally, finally bought one of these: 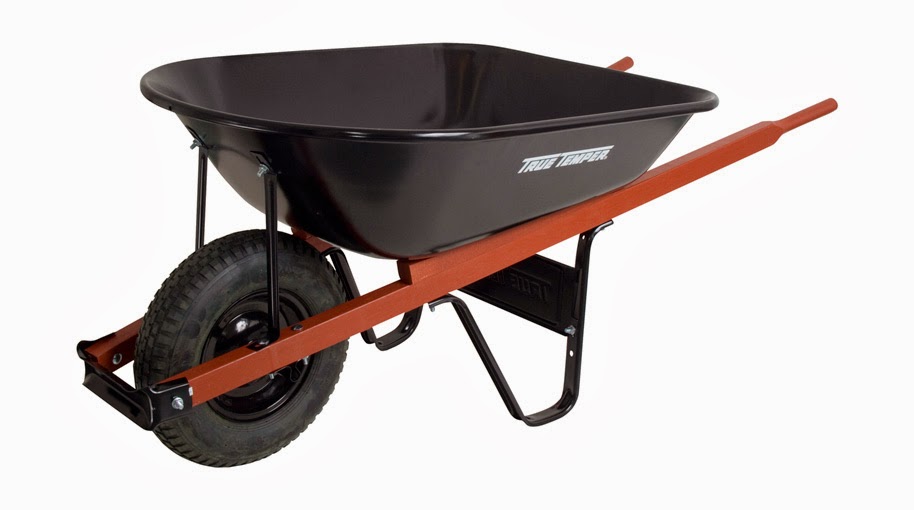 I have been dying for a wheelbarrow for years, and I’m going to need it now, more than ever, with all that rabbit manure I’ll be toting around.

I decided to go with Sherwood Forest brand rabbit pellets. Most rabbit raisers would probably scoff at this choice, believing one pellet is just like the next. I was really impressed with their ingredient list, and since we’ll be eating the rabbits, I felt justified in being choosy. Soy free, even! I don’t think rabbits were meant to eat animal by-product meal, anyhow.

We also went a little out of our way to source quality hay as well. We ended up taking five bales home, since we only had a 20 and I really didn't think the farmer’s kid had any change. So now storage will be a challenge. Considering we have no barn, no garage, and our storage building lacks a floor and stays damp from the rains. So that leaves our house or my parents’ farm. They don’t have a barn either, but they do have a dry storage building. Hopefully that will be sufficient to keep the hay fresh at least through the fall. I went ahead and bought a hay bag/tote to hang in the rabbit shed. It’s designed for feeding horses, but it seemed like a handy way to store and dispense the hay, rather than hauling it in and out of the house. I probably could have made something to use for this purpose, but I don’t exactly have plenty of spare time these days. It really needs some Velcro or something at the top to close it up and keep out critters (namely nesting birds and rodents). I might be able to manage that.

I’m planning on feeding the rabbits as much forage as possible. This is also kind of scoffed at, because everybody knows that green foods in excess cause diarrhea. It’s also thought that adding green stuffs to their regular feeding regime will detract from their overall nutrition, since they’ll be eating fewer of the “complete” pellets. I beg to differ. Domestic rabbits were doing just fine on grains, veggies, and forages before pellets came along, and wild rabbits seem to thrive on their completely forage based diet. I tend to subscribe to a more naturalistic way of thinking. Animals should eat what they were meant to eat.

Take dogs, for instance. As a culture we've come to believe that dry kibble, comprised largely of cooked grains and animal by-products, is the best thing for them. Despite the fact that bagged dog food has only been around for 50 years or so. Dogs are carnivores. Carnivores eat meat. I have fed my dogs a raw meat diet off and on for years now. They always do awesome on it. Even aging seems to be reversed when I feed it to my older dogs. Aches and pains go away, teeth whiten, coats glisten, and they are full of energy. The only reason we aren’t feeding it right now is because all that bagging, freezing and thawing is a bit of a hassle. And with an infant in the house I really didn’t want thawing chicken to be sitting around. But we may be able to get back on track when we have an abundant source of raw meat and odd bits to give the dogs. I really want to. Tavi is now 12 and starting to get a little stiff, and Lucy has developed arthritis in her hind foot.
It should make sense to us. It’s widely accepted that the more processed a food is, the less healthy it is for us. Which is better: a fresh salad picked from the garden, or salad that has been cooked, extruded and pressed into blocks? Seems like a no-brainer to me.

But, back to rabbits. I’ve followed a particular blog where breeders feed their rabbits a large amount of forages, even (GASP!) baby rabbits. They are working towards growing more and more of their rabbits’ diet on their own property, until they are not longer feeding pellets. So I’m looking forward to giving it a go. The rabbits I am purchasing haven’t even been eating hay, so I’ll have to introduce these new foodstuffs gradually.

Eventually I would like to build “rabbit tractor” pens, to grow out the fryers. That will take a little more designing and implementing than our chicken tractor did, since rabbits dig. Oh well, we’ll worry about that later. For now it shouldn't be too much of a hassle to take the forages to the rabbits. Especially with my new wheelbarrow!

We did a lot of running around town yesterday. It was the longest Ian had ridden in the car since he was a sleepy newborn. I was kind of using it as a test run, since he will be riding in the car all day on Sunday. He didn’t exactly pass with flying colors, but I’m trying not to stress out about it too much. It’s just one day, and we will all survive. And then we will own the world’s 14th rarest rabbit!