Our rabbits are here!

Yesterday was a harrowing journey. Ian did about as well as he could have, I suppose. I think momma was more stressed than he was, at least for the first leg of the journey. He refused to nurse every time we stopped. He was either too interested in where we were or his gums were bothering him a lot (or both). 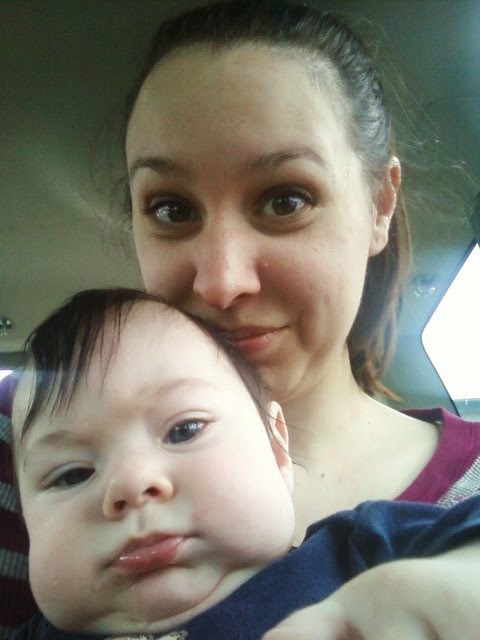 Me stressed, and Ian not so much 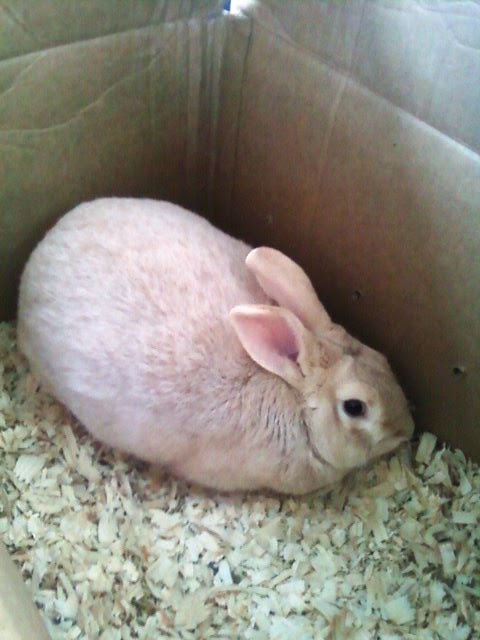 The senior buck had to ride in a cardboard box, since I only had 2 pet carriers. He did really well. 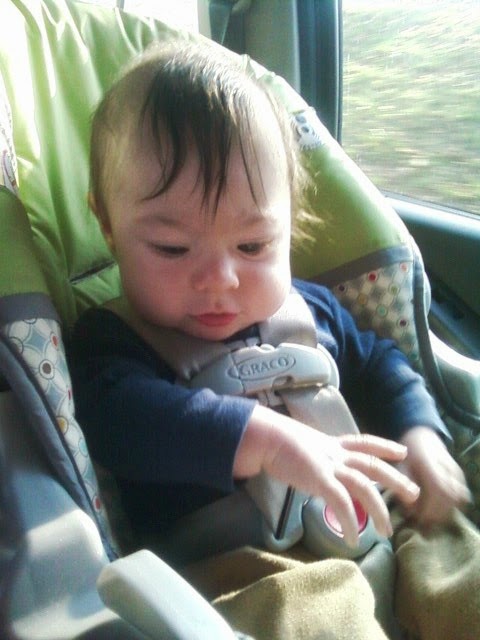 Ian stayed relatively happy for much of the way down

The ride home was much harder, and that last hour was ROUGH, let me tell you! But, we survived, just like I thought we would. And our four Crème D’Argent rabbits are happily munching hay in their hutches.
I went with Bob Bennet’s recommendation and bought 2 bucks and 2 does. 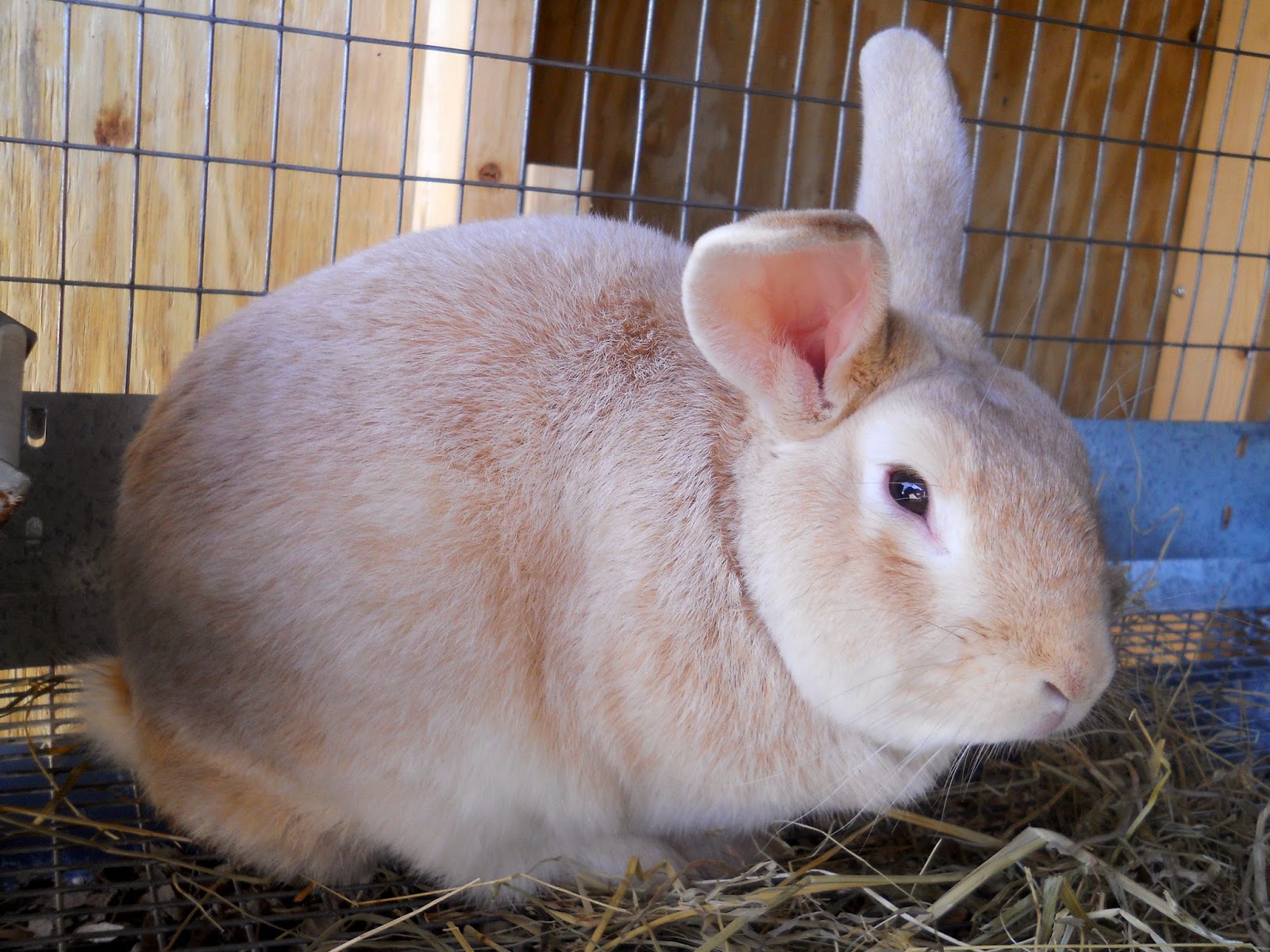 I was going to get another junior buck, but she offered him to me instead, wanting to free up the cage space. He’s a nice buck with one Best in Show under his belt, and lots of winners in his genetics, so I was happy to take him.

This is senior doe COY (I don’t remember her official name. The breeder is mailing me her pedigree.) She was bred the day before I bought her, and hopefully it was successful. We could have a litter of bunnies this time next month! 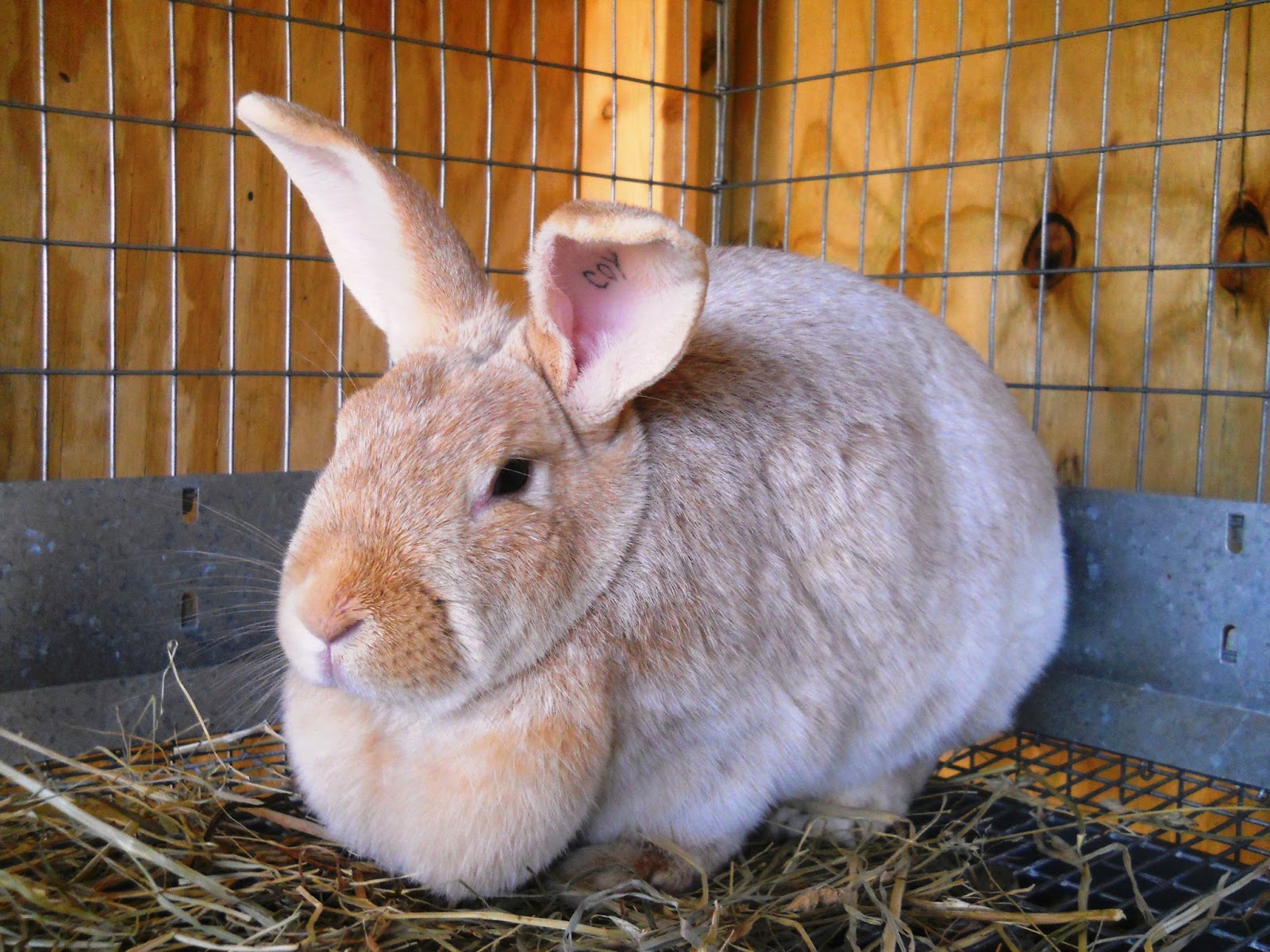 This is the junior buck, who has yet to be tattooed. I’m naming him Colbert. He is the friendliest and most outgoing of the bunch, and I’m looking forward to using him in my breeding program. 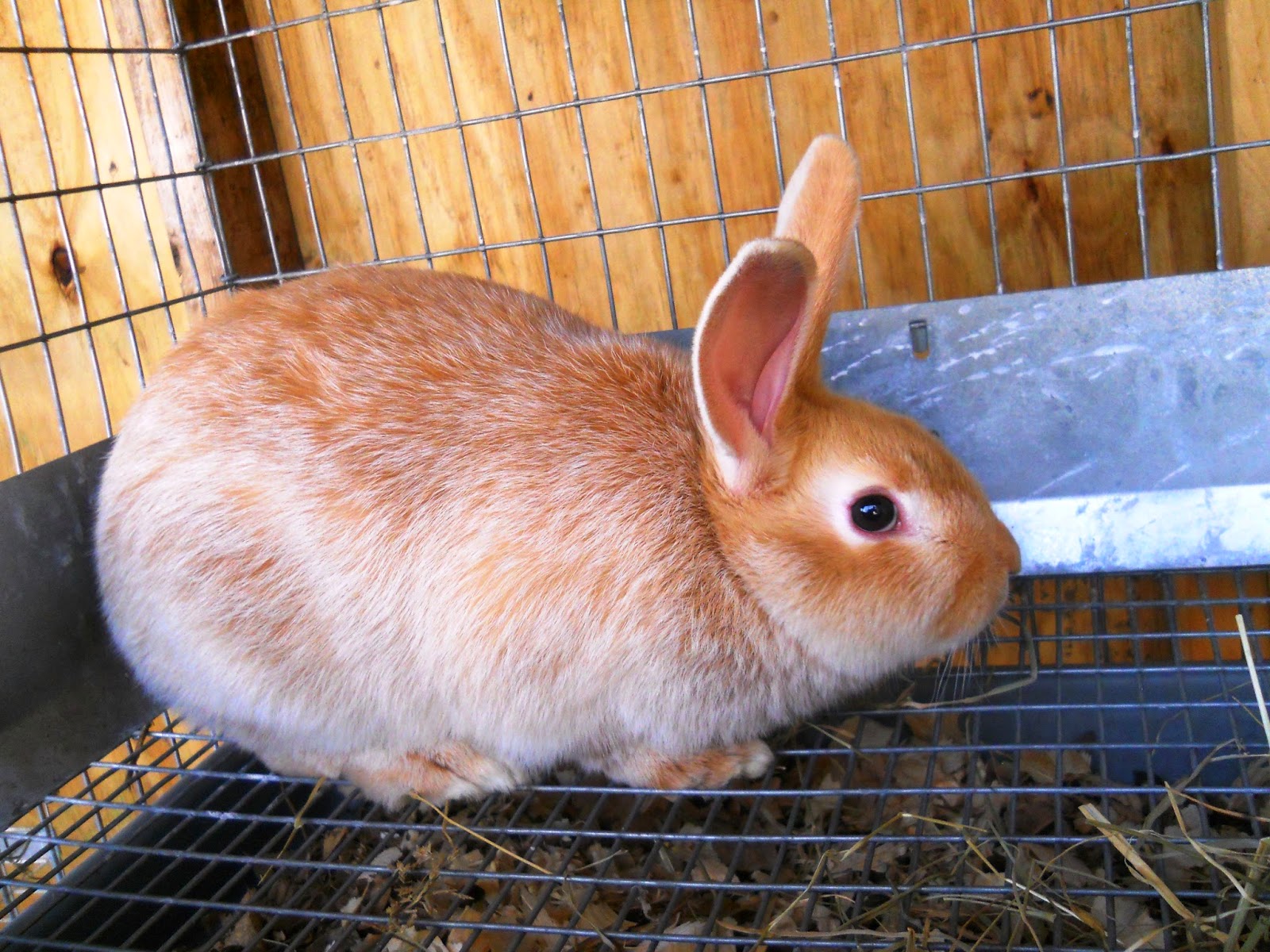 And last but not least, the junior doe, who I am calling Josephine. 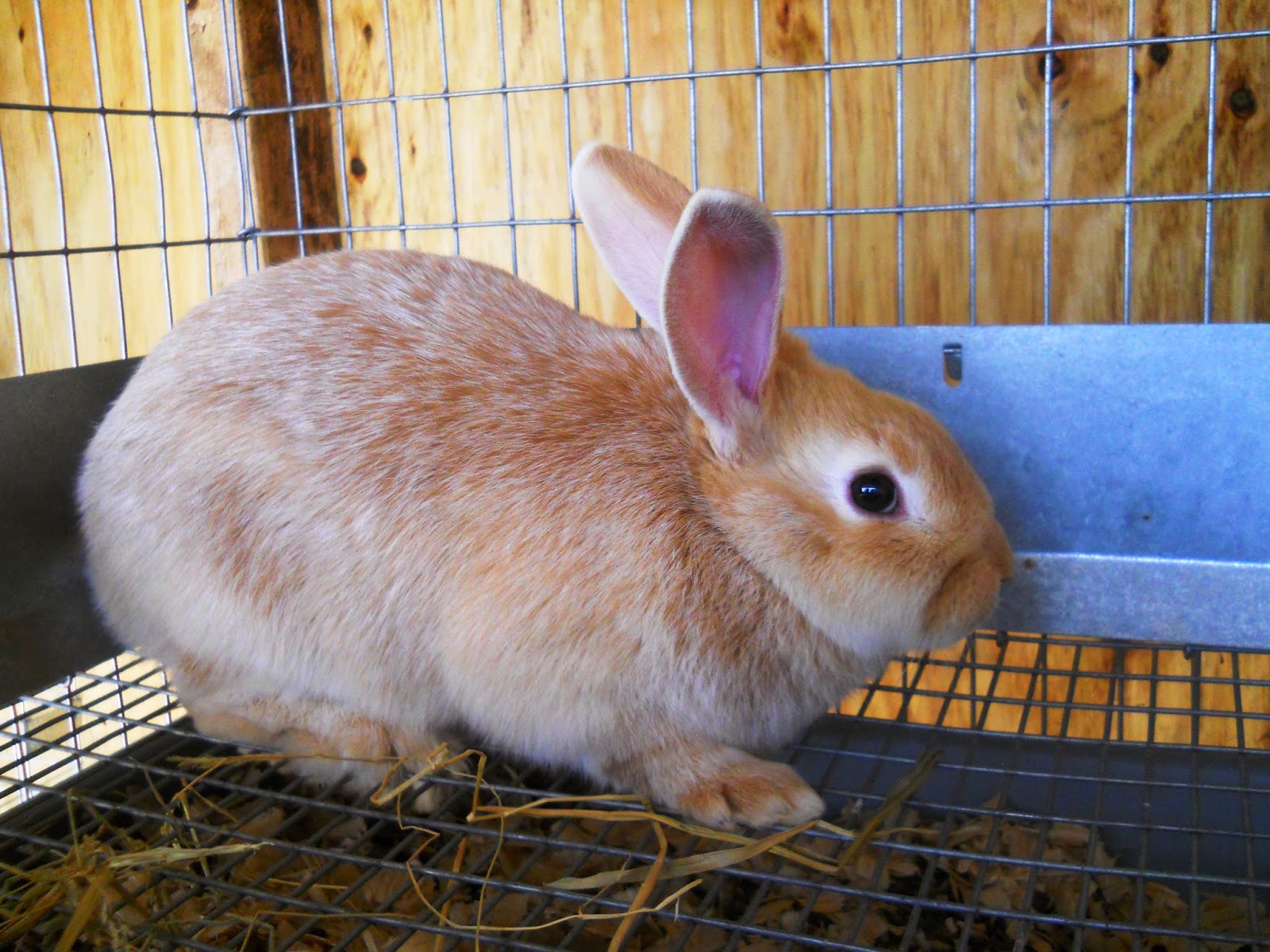 Both junior rabbits have a lot of potential. They will be ready to breed in May.

None of the four rabbits are directly related (as in, not siblings or offspring of each other), so I have a lot of pairings to play with.

I am thrilled with them, and so excited to be the only “official” breeder in Tennessee. I need to renew my membership with the ARBA and get on the breeders list.

While the free standing cages are the easiest to set up (no hanging involved), I’m already discovering their drawbacks. Mainly the fact that there is no absorbent substrate underneath to soak up urine. Just a plastic tray. I’m thinking I will add a mixture of soil and pine shavings to the trays to help absorb the urine, and get a better compost going. I would much prefer to have them all as hanging cages, and make compost bins underneath. In fact, I’d really like to have worm beds. Perhaps in the future. I’ll just work with what I have, because you can’t beat FREE cages! 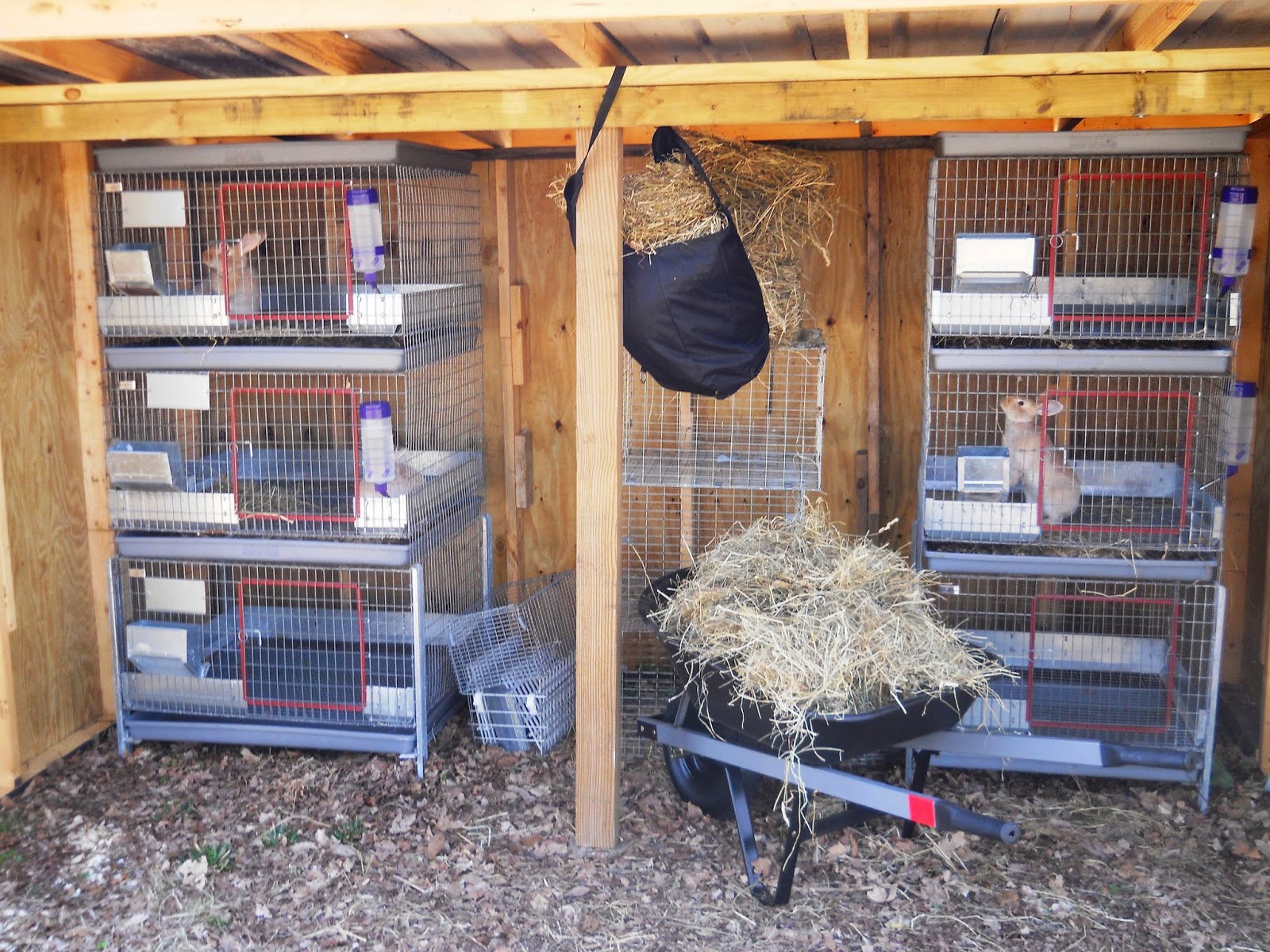 I’m going to order a tattoo kit and figure out an identification system. I read an idea in one of the books to put your initials before or after the numbers, to help identify does and bucks. There are also systems for determining date of birth, but I may not get that in depth.

For now they seem to be settling in nicely, and already come up to me when I feed them. Very excited to have them!